The unique urban feel and the energy of Sixth Street made Austin one of my favorite cities of the trip. It also helped that two of our amazing friends took the time to visit us while in Austin.

Our arrival into Austin seemed even colder and gloomy than San Antonio. We spent some time relaxing in the hotel room before deciding to head out into the chill. Finally, we realized we should see the city in some daylight and get a late lunch so we bundled up and walked from our hotel down to the main part of the city near Congress and 6th Street. Even during the afternoon, we could tell that Austin and 6th Street were an area we’d like. 6th street is lined with bars and restaurants which feel like a college town’s. There were also food trucks on most corners, but they were closed due to the weather. After finding out our first choice for lunch, a food truck, was closed, we went to Koriente. Koriente serves bowls of Asian Fusion food and focuses on letting you customize the meal. We both picked out a bowl of vegetables and added meat and rice/noodles to it. It was good, and the kind of place that Jon said he would eat at often if there was one at home, however it wasn’t excellent.

After eating, we walked down to the river. One of the most popular attractions in Austin is to watch the largest colony of urban bats fly out from under the Congress Ave bridge each evening. We had heard that the bats migrate south for the winter starting in October, but when we walked past the bridge at around 5:30 there were a dozen or so tourists waiting to see the bats. We took our time walking back and forth over the bridge and around some nearby parks, but didn’t see any bats. Later, we saw online that some people claimed to see the bats in the evening in early November, but we’ll never know if they came out after we left or if they had already gone for the winter. We also stopped to get Jon a coffee because we knew it would be a late night for us. We stopped at Hideout Coffee House which turned out also to be an improv comedy theater.

Back at the hotel, we waited for my college friend Nina to join us. Nina lives in Houston and was going to spend the weekend with us. She arrived around 10pm and we walked out for a late dinner. We eventually got dinner at Second Bar on Congress Ave. We were seated right away. I had a house red wine which the waiter warned me was served chilled, but I wasn’t very impressed with it. For dinner Nina ordered brie and soup while Jon and I split a salad and a pizza. The pizza was blue cheese, pork belly, and dates, and it was fabulous. In fact we all enjoyed the food very much. We also enjoyed the atmosphere which allowed us to talk and catch up.

Before turning in for the night, we had to experience 6th street. 6th street was crazy. It was closed to cars and people were everywhere. It reminded me of Bourbon Street in New Orleans. Austin is known as the live music capital of the world and music was coming out of most bars. We skipped the music so we could keep talking and went to The Jackalope (our decision was also swayed by the chance to ride a larger than life jackalope. 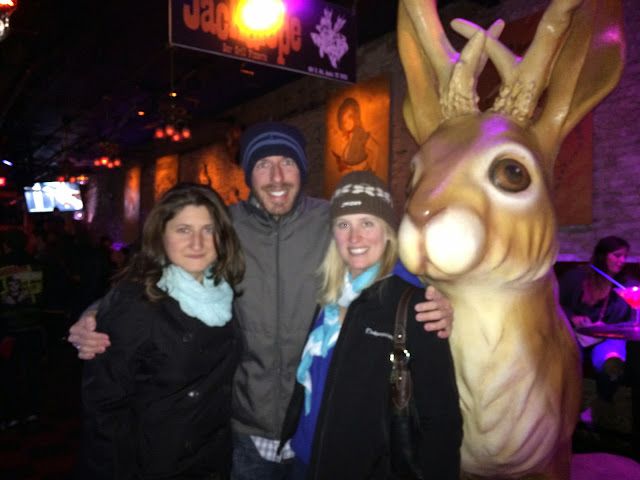 On Saturday morning, our first stop was to something uniquely Austin, the graffiti wall. The graffiti wall was the concrete foundation for a condo building which was abandoned and started to be painted by local graffiti artists. Since then it has become a community art project. Before spray painting the wall you are supposed to register with the project. Some of the graffiti was thought out, very well done, and interesting to look at. Other graffiti was just spray painted names and tags. The graffiti wall stair steps up several stories, so we climbed some steep paths to see all of it. 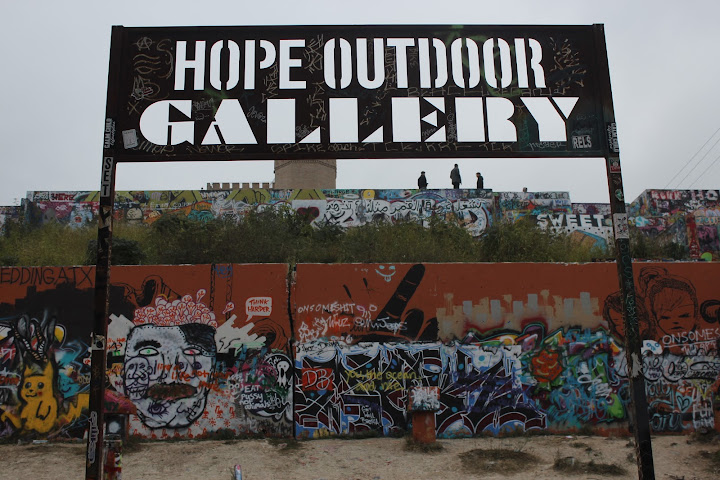 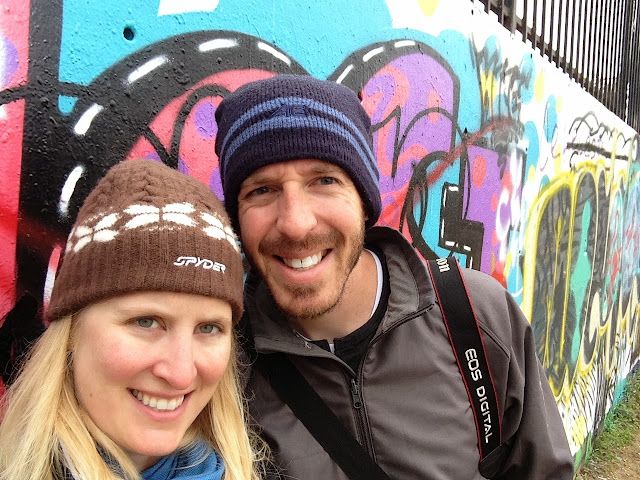 When we finished at the graffiti wall, another friend from Texas, Dan, was just checking into the hotel with his kids Alexa and Dean. We met them at the hotel and went to lunch. Realizing that Penn State football was on we decided to try and watch the game. We went to Shiner Saloon. We had seen Shiner the previous day and wanted to go there for a number of reasons; Jon likes Shiner beer and it was a Steelers bar. The bar was mostly empty so we got a table and had a TV changed to the PSU game. The food was pretty good and in particular our table enjoyed the chips and queso.

The next stop for us was the Texas Capitol Building which allows visitors until 5pm and has guided tours until 3:30. We got into the last guided tour, which was more about Texas history than the capitol building. Our guide explained many of the paintings and portraits depicting notable Texans. 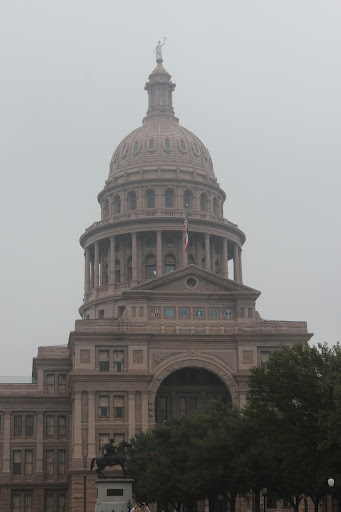 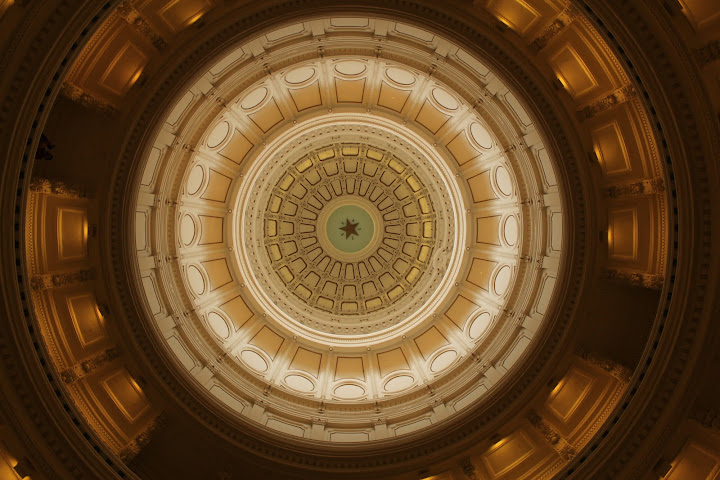 Nina, Dan, and us decided that the perfect activity for the evening, and for the kids would be to go back to the Hideout Theater for the improve show. The Hideout has shows about 3 times an evening on weekends. We bought tickets for the 6:00 show called Maestro Raw. Maestro takes 12 comedians and has them play whose line is it anyway style games for points until one is pronounced winner. We had a really good time and enjoyed the show a lot. Alexa became the hit of the show when she was called on stage to give all of the suggestions for a skit. We ended up watching a giraffe, bird, and kid going to the park to learn gymnastics. By the end of the show, both Alexa and Dean were calling out ideas that often got used. Most of the audience and performers came up to high-five Alexa at the end of the show. 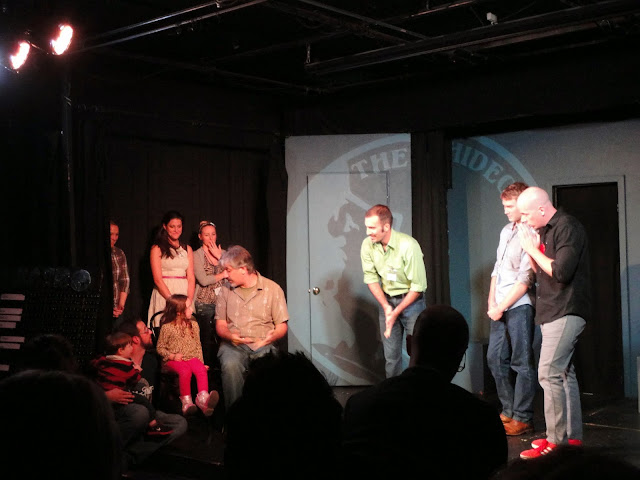 For dinner, Dan had a few suggestions and we ended up at Threadgills known for its home cooking. For us, the highlight of the menu was the extensive list of sides and vegetables to pick from. We ended up ordering a plate of 5 extra sides for the table and having more food than we needed. Everyone enjoyed their meals; the highlights were the wasabi dressing, chicken fried steak, and macaroni and cheese.

We had a great time with our friends in Austin and were very touched that they would travel so far to see us for a night. In the morning, we had breakfast at the hotel together before saying good bye. 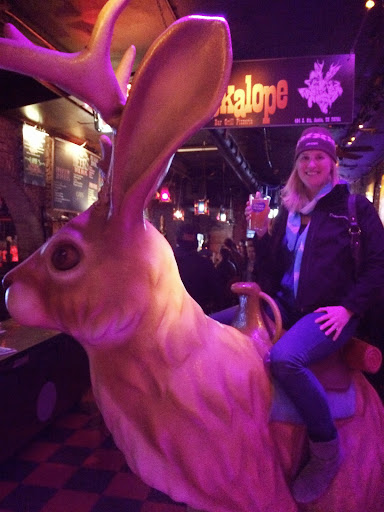 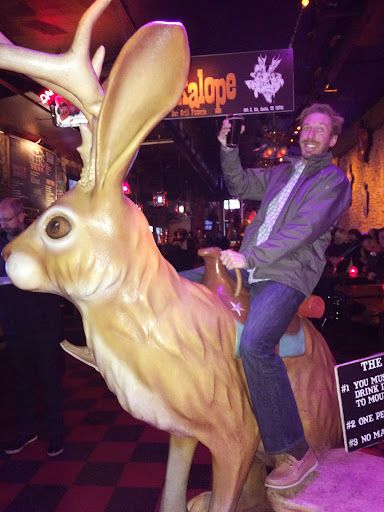 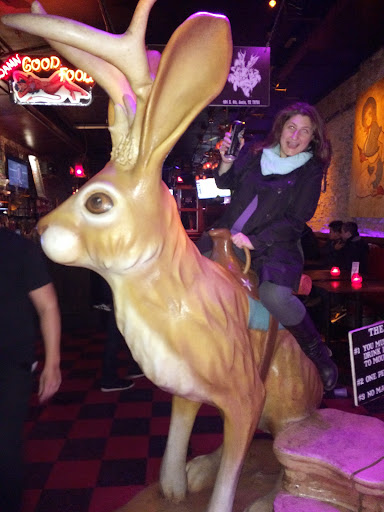 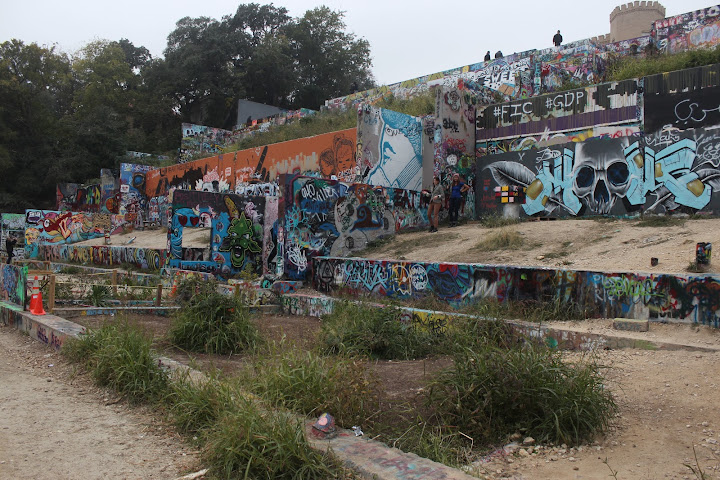 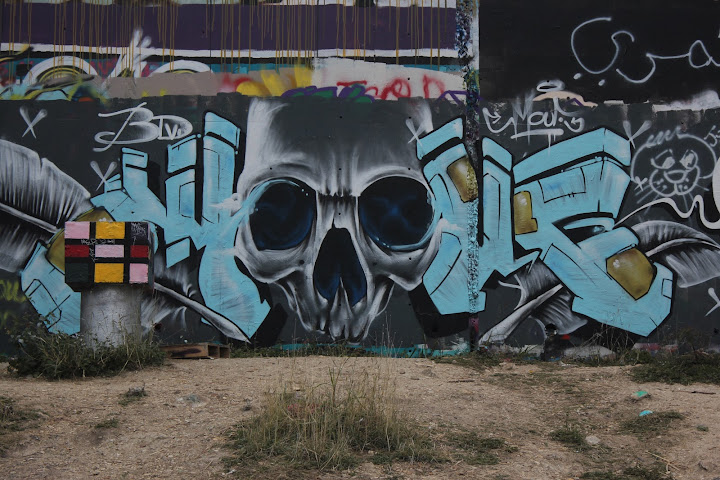 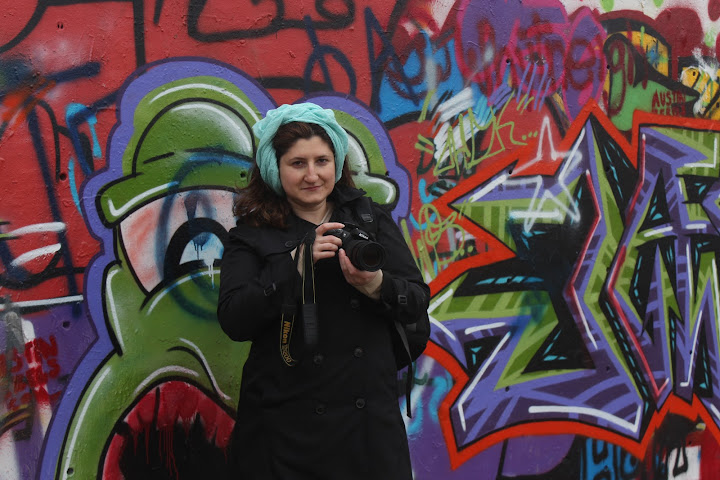 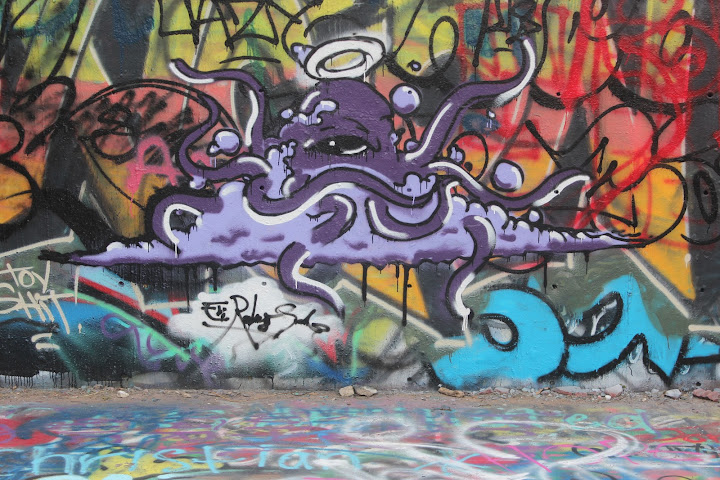 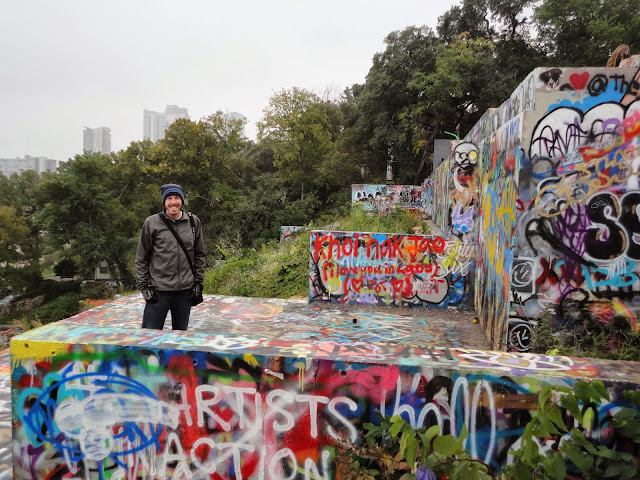 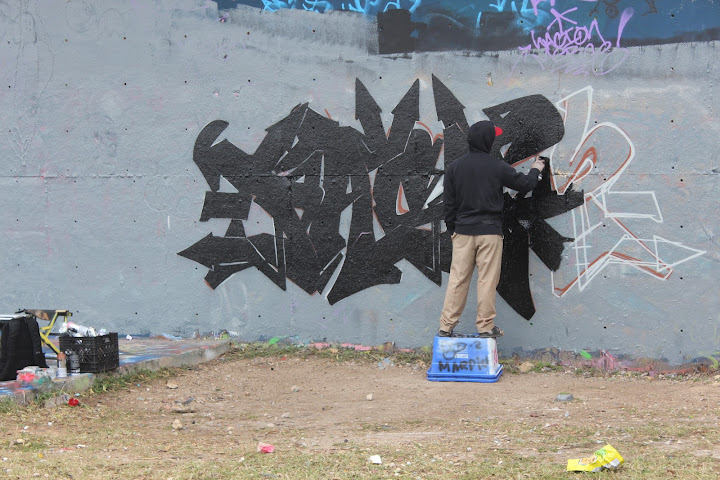 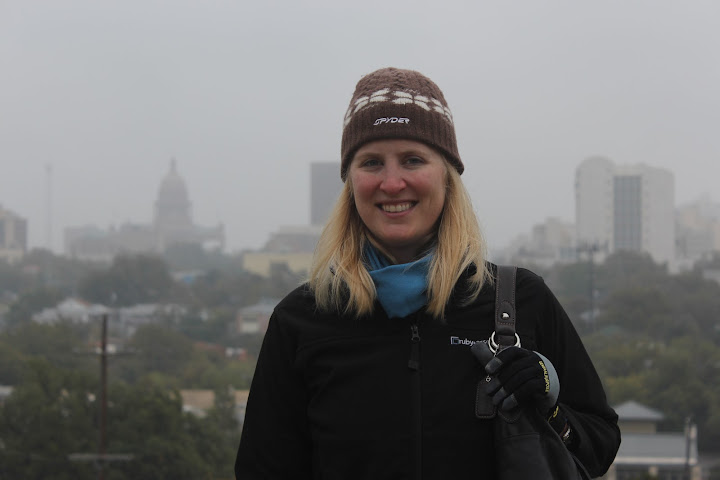 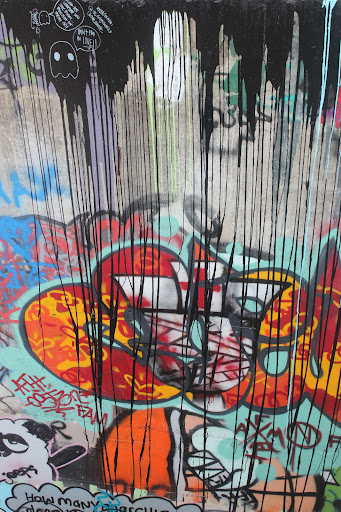 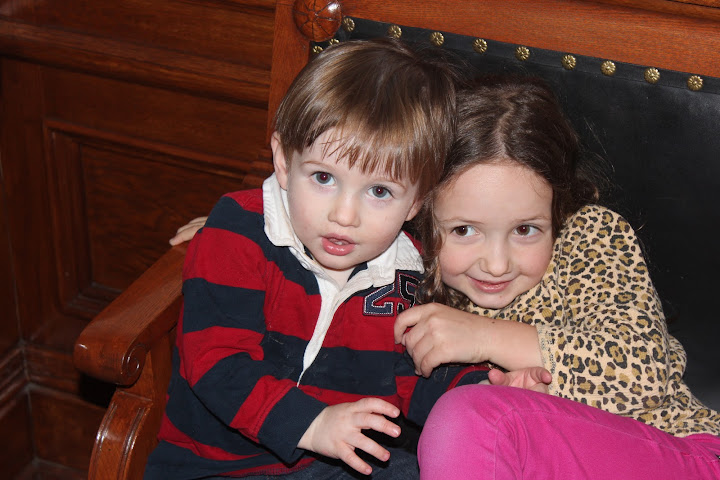 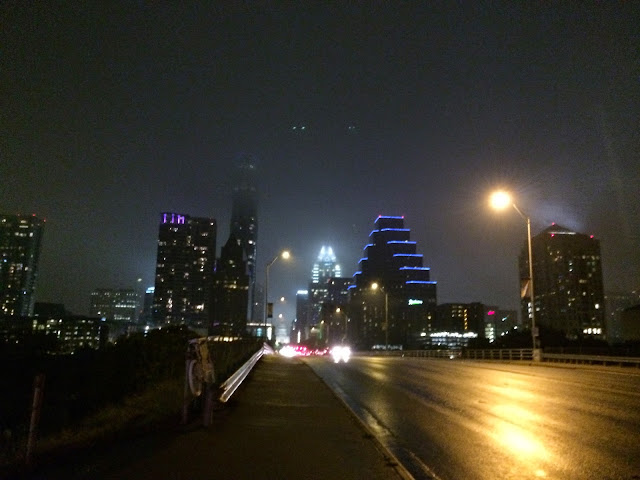 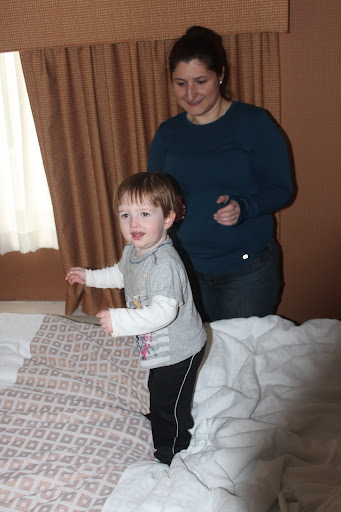 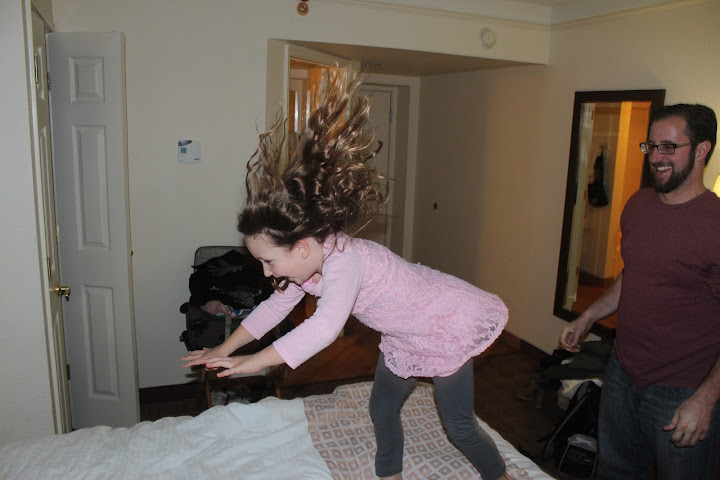 One thought on “Austin, TX”