Monetverde, Costa Rica is called the ‘Cloud Forest’. It is a lush jungle forest located high in the Cordillera de Tilaran mountains so that low hanging clouds mingle with the jungle trees. It is known for its ecotourism including nocturnal jungle tours. Monteverde came highly recommended to us, and was our second destination during our honeymoon in Costa Rica.

Mid-day we left our first destination, Arenal, in a rental SUV and drove a to Monteverde. The ride to Monteverde was about 4 hours, with the last 30 km (one hour) being on unpaved dirt roads. An SUV was definitely a must to reach Monteverde, although the roads around Monteverde were the only ones that we encountered which lived up to the bad reputation of Costa Rican roads. Along the way monkeys and sloths were visible in the trees if you had a keen eye. 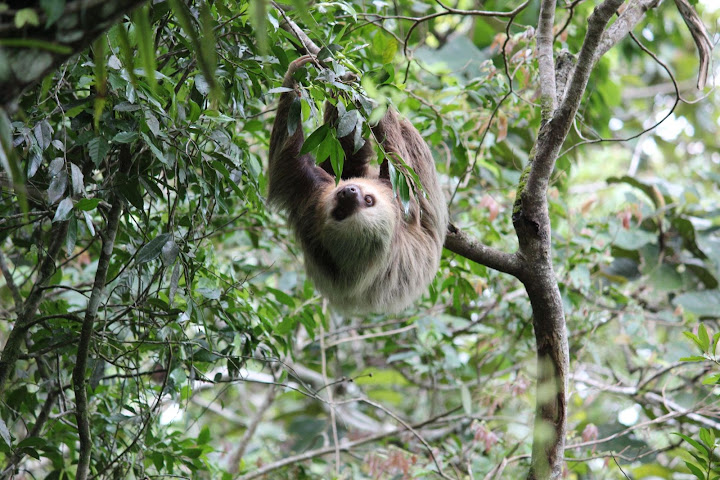 Monteverde itself appeared to be a sleepy backpacking town during June. Luckily, once there, the roads were paved. We checked into our hotel El Establo (the stable), which we chose because a friend who knew the owner recommended it to us. El Establo was a very large resort with several hotel or lodge buildings and a private section of jungle forest. The resort winds its way up a steep mountain with two restaurants and two swimming pools. A shuttle bus would take visitors up and down the mountain. It was very reminiscent of a ski resort. Unfortunately, because it was the off season many of the buildings and amenities were closed leaving the resort feeling a bit desolate. 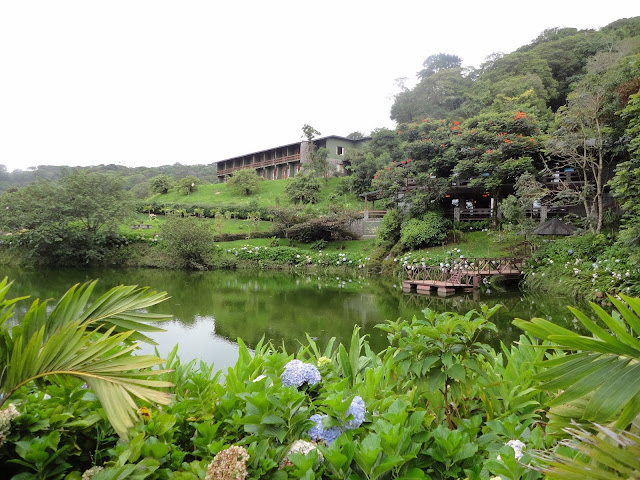 For dinner we went to a restaurant called Morpho’s that was recommended to us by several people in Arenal. We started to walk there, but quickly realized it was farther than we expected so we went back for the car (also our GPS had sent us in the wrong direction). Morpho’s was a backpackers haven with a America style menu and casual atmosphere, which we enjoyed.

The next morning was our zip-lining day and the main reason we came to Monteverde. After recommendations from several friends, we had decided to book a combined canopy tour (zip-lining) and sky walk (jungle tour) with Sky Trek. After breakfast at the hotel, Sky Trek picked us up and drove us to their facilities. We started with a nature hike (the sky walk) that went thought a small area of jungle and over suspended bridges. During the walk we saw a lot of birds and insects (like large millipedes) but to our disappointment no mammals. After our nature walk we were put with a larger group of young kids for zip-lining. The only other person who was not part of the kids’ group was a man named Carlos who we chatted with. The zip-lining was a lot of fun and the length and height of the lines made my previous zip-lining excursions pale in comparison. Afterwards we joined Carlos for lunch at a local restaurant; although he was from Florida, Carlos spoke Spanish and was a big asset finding a restaurant and getting us a cab back to the hotel. 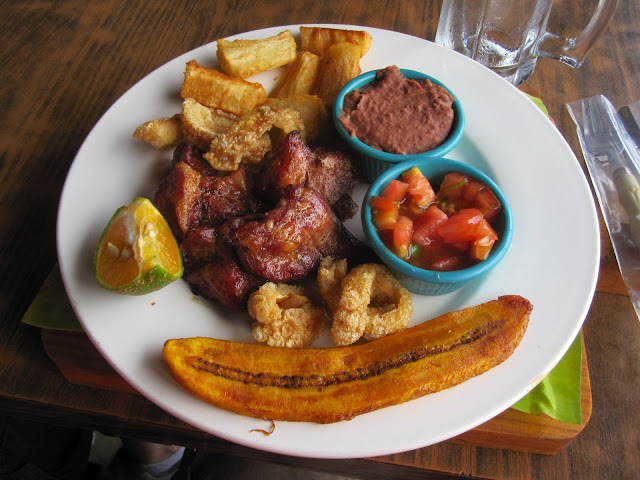 Shortly after reaching our room, the hotel the front desk called and offered us a free spa treatment (to make up for some miscommunation we had when checking in and because we did know a friend of the owner). Shortly later the hotel brought us a bottle of champagne. We took a break at the hotel’s pool until the hotel’s daily ‘nightwalk tour’. Guided jungle night tours are a very popular activity in Monteverde where most of the jungle mammals are nocturnal. The nigthwalk tour was one amenity of staying in a hotel with a its own private jungle land and we forwent more popular tours for the hotel’s tour. 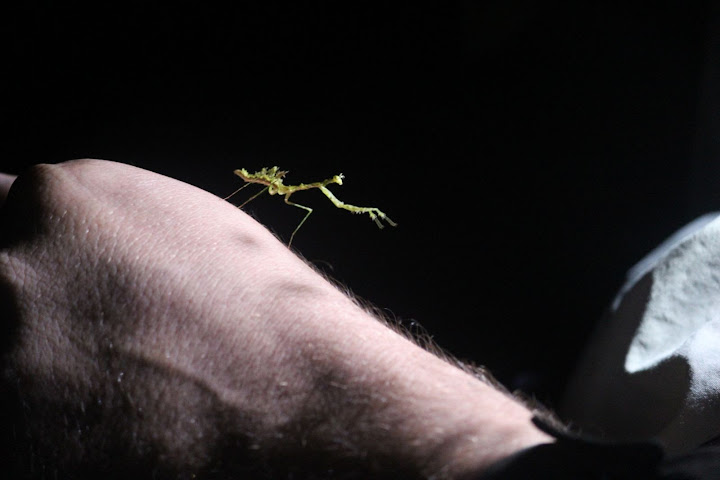 Of course, in true Costa Rican fashion, it was raining for our tour. The guide handed us each a flashlight and led us down the trails. Once again we saw lots of bugs but were unable to see any mammals. After the tour we took advantage of another hotel amenity, Luggas, a formal restaurant with a romantic pond view.

Saturday we had breakfast at the hotel buffet and then our complimentary spa treatment. The spa gave us each a 60 minute massage and a 60 minute hot tub soak. We think the soak was because only one girl was working in the morning and she was trying to keep us occupied while she attended the other. Both were enjoyable and Jon was lucky enough to see a toucan from his window, but two hours was too much downtime for our active travel style. We checked out of El Establo and began our drive to our last stop, Manuel Antonio. We encountered more rough dirt roads leaving Monteverde but otherwise had a fine drive. We stopped for lunch in a beach town called Jaco where we ate in an open-air restaurant. Jaco was a surfer town with a lot of casual dining and souvenir shops that felt a bit like American boardwalks. 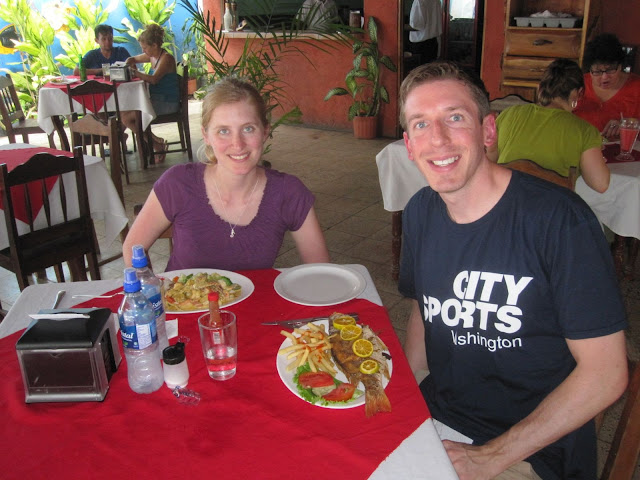 El Establo – A very large mountainside resort. It felt empty during the off-season, but if you want an all in one (restaurants, spa, pools, and trails) this may be the place for you. A buffet breakfast was included.

Morpho’s – Casual restaurant with a mixture of locals and tourists, Costa Rican and American cuisine.

Sky Trek – Amazing zip-lining! However the Sky Walk can be hit or miss.

Toad Hall – This is definitely a tourist trap, and we didn’t stop here. But their advertising for miles along the road builds curiosity.

Night Walk tour – There are many services that offer a night tour to point out nocturnal animals in the forest. Curi Cancha Reserve and Monteverde Reserve have a well reviewed night tour on trip advisor.

Tree House Restaurant – We didn’t eat here because it was always packed. It appears to be another causal restaurant for backpackers similar to Morphos, but with a unique ‘tree house’ gimmic.

Monteverde is full of other ecotourism activities such as bird watching, butterfly farms, and horseback riding. 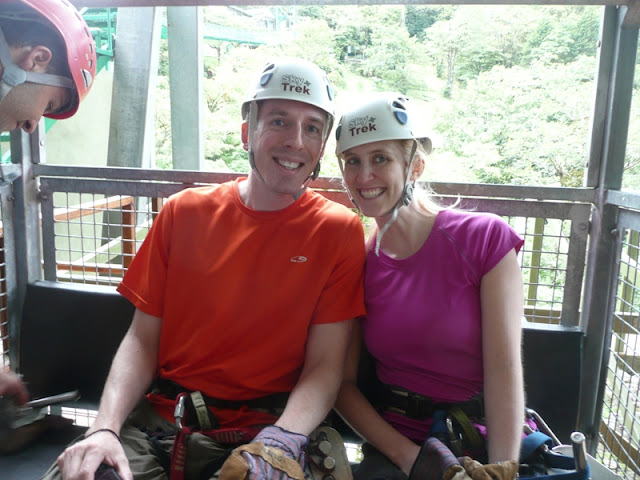 On the Sky Tram ready to Zip-line 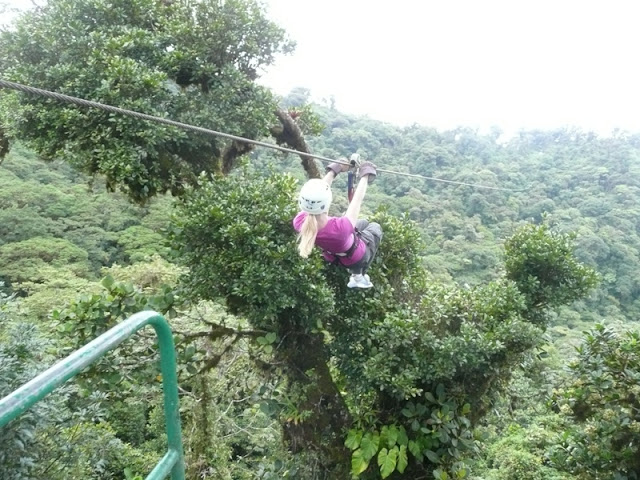 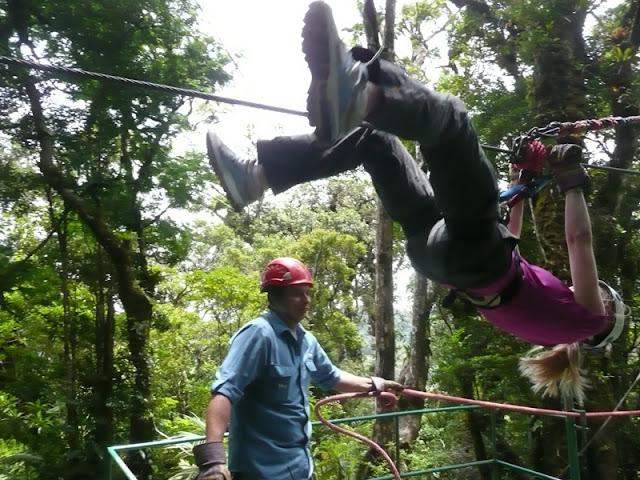 This is how to break when zip-lining