One of the first large hiking extravaganzas Jon and I took together was a trip to Zion National Park in Utah in October 2011, where we spent three days hiking Angels’ Landing and the Narrows, cayoneering, and enjoying the town of Springdale. Jon enjoys travel planning and took the lead in booking us flights and hotels.

Zion is not the easiest place to travel too. The closest major airports are Las Vegas or Salt Lake City; from which both require a rental car and several hours of driving to reach the park. Our trip began on a Thursday evening when we flew to Vegas. Our flight which was originally scheduled to leave at 7 was pushed it back few times and sat on the tarmac even longer to wait out a passing rain storm. We finally checked in to a hotel on the outskirts of Las Vegas at 1:30 local time (4:30 east coast time) for a few hours of sleep before starting an early morning drive to Utah.
The drive was nice drive with no traffic, but not much scenery either. When we neared the park and the town it is in, Springdale, we stopped for groceries so we could take sandwiches and fruit on our hikes each day. We called the hotel we had previously booked and they told us we could check in early so we went there first instead of driving straight to the park. We stayed at the Cliffrose Lodge and Gardens. The hotel property was beautiful and serene, with a garden view of red stone cliffs and the Virgin River. The hotel’s best feature was it’s amazing location with a walking path straight to the park entrance.
Zion National Park is $12 a person (walk-in) for 7 day pass. Once inside the park, shuttle buses run from April-October to get visitors around. The buses feature an audio commentary which narrates the ride pointing out geographic features and park history. Occasionally the bus driver will point out animals or rock climbers which the untrained eye will easily miss. 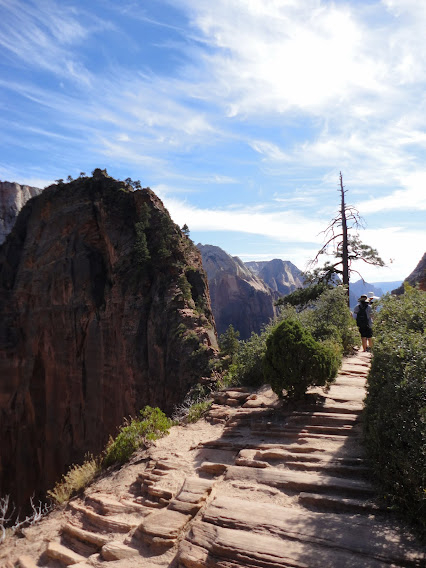 Ridge back trail to Angel’s Landing

Our highest prior hike, Angel’s Landing, was near the far end of the park so we enjoyed most of the shuttle commentary. From the bus stop you cross the Virgin River once and start the climb. The first part of the hike, Willy’s Wiggles, is a series of switch backs. From the road, and from most of the trail, the path isn’t visible and it looks like shear cliffs. Each time we made a turn I couldn’t figure out where the next turns would be. After Willy’s Wiggles there was a shady area that was mostly flat to get to the back side of the mountain; then more switch backs, this time short and steep. At the top is Scout’s Lookout, and the end of the trail for some hikers. From Scout’s lookout the trail follows the mountain ridge to Angel’s Landing. (Called so because the person who named it thought it was a peak only Angels could reach. The park built the trail in the late 1930’s). The ridge is high and narrow. Along most of the ridge there are heavy chain rails to hold on to. The climb wasn’t as difficult as we expected, however you have to be aware of the people coming the other direction and wait for them to pass at times. At the top was a great 360 degree view, a few people eating lunch, and lots of chipmunks trying to steal lunch. Coming down the ridge on the way back was a bit easier, in part to the downward path and in part because the day had cooled after the mid-day sun.
Our long hike had us running late for a dinner reservations, but Parallel 88 (now closed) was very accommodating when we called to warn them of our tardiness. Parallel 88 was a little place but may have been the best restaurant in town for foodies. After dinner we took advantage of the hotel gardens and watched the stars. (AND Jon proposed!!) 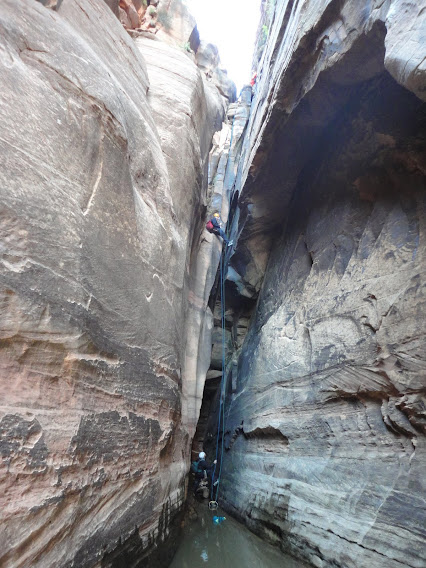 Since we came to Utah for the adventure, Saturday we joined a canyoneering tour through Zion Adventure Company. We had to be at the tour company at 7:30 where we were instantly put us to work packing our gear for the day. The tour included; a drysuit, harness, caribeaner, helmet, jumpsuit, and dry bag in addition to water, lunch, and extra layer of clothing we had to bring for the day. Two other couples were on our tour including one person who knew my 3rd grade teacher (what a small world). The guided tour started with a 40 minute drive on terrible dirt roads to Water Canyon. We began our hike slowly winding up the canyon for two miles. At the top we had to put on our gear: our layers, a drysuit, neoprene socks, water-shoes, jumpsuit to protect the dry suit, climbing harness, and helmet. Our guide gave a 5 minute talk about tying into the ropes and sent us down rappelling down a cliff. I was second. I was worried 5 minutes wasn’t adequate instruction for something this dangerous, but the rappelling proved to be very easy. After the first rappel we were told us to find the path… which meant jumping into a pool of cold water (it was October) and following the flow of water back down through the canyon. The rest of the day was spent rappelling, jumping into water, and climbing over rock obstacles. By the end of the tour, we’d completed about 8 rappels. The last one was the longest being over 100 feet. On the ride back our guide stopped for ice cream. That night my husband and I ate at the Bit and Spur, a restaurant we had driven past a few times which seemed to draw a crowd. 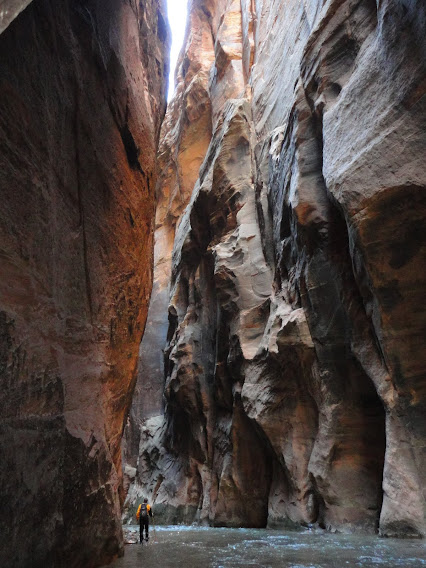 Our last day was supposed to be our easy hike, The Narrows. The Narrows is a hike in the Virgin River right up the canyon. We rented gear (dry suit, walking stick, shoes) from the Zion Adventure Company. This time we took the park shuttle to the last stop in the park. At the start of the trail we put on the drysuits, socks and shoes and started into the river. Many people were hiking in shorts or pants and must have been freezing! If you go in October like we did, dress for the season. The dry suits are awkward and look like they belong in Star Trek, but at least we stayed dry. The hike was much more difficult than we expected. The water current was very strong and the river was very rocky and difficult to walk through. At times the water was chest high. I found it much harder to walk when the water was knee high and moving fast over shallow rocks. The canyon views were incredible and changed often as the river twisted. After 3 miles canyon narrows into an area called Wall Street. After walking through wall street, we decided back track to a tributary called Orderville Canyon. Orderville Canyon was much easier to walk up because it had less water, but more fun for us because it had many obstacles. The first difficult area had boulders blocking the path creating waterfalls. While a line of people was trying to climb up the side of the obstruction, I swam out to a small waterfall in the middle of the boulder, pressed my feet and back against opposite walls and shimmied up it. A later obstacle had very shallow foot holds craved into it. For a while we thought there was no way we’d get up it with our big feet and poor balance, but after watching some other people we gave it a try and it was easier than expected. When we finally reached a point where we decided it was better to turn back. At that time we met an old mountaineer who was hiking down the canyon and enjoyed his experienced company for part of the return trip. By the time we back tracked our steps we had been out all day, and it was dinner time. So much for our easy day. Dinner that night was at Oscar’s, the most advertised place in town.

Monday we got up early enough to take some photos at our hotel (and re-enact our engagement). We wanted to drive though a tunnel in the park which several people had recommended, but after waiting in traffic for it we turned around and left.
Hints:
Places:
Advertisement