The White Temple is an artist’s creation and one of the biggest attractions in the otherwise industrial city of Chiang Rai. Completely white with disturbing statues and modern references, the White Temple is unlike any other. 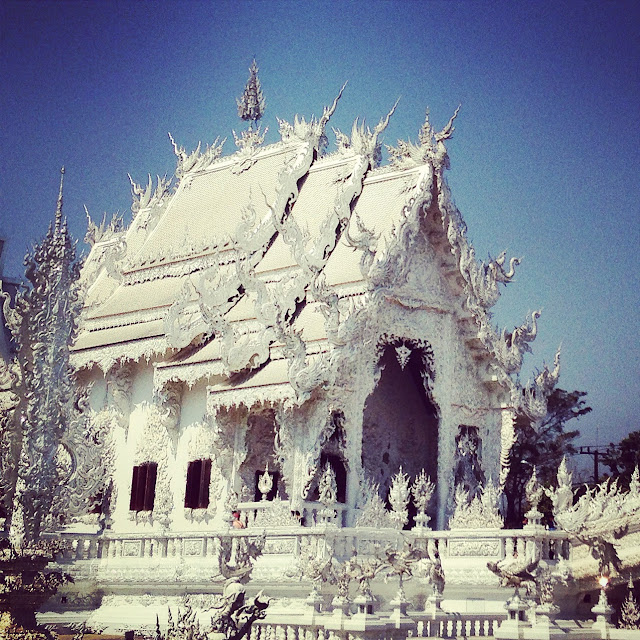 Our first destination back in Thailand was Phuket and the other southern islands. Having crossed into Thailand from Laos at the land crossing in Chiang Kong, we had to travel to the airport in Chiang Rai to reach our destination.

When we arrived the night before in Chiang Kong, several locals where happy to explain the buses to Chiang Rai and Chiang Mai, when they ran, how long they would take, and where to catch them. We knew that the local public bus ran every hour to Chiang Rai and that it was an approximately 2 hour bus ride. Having the bus leave every hour gave us a lot of freedom, which our friends traveling to Chiang Mai didn’t have since their bus ran only 3 times a day.

After breakfast we caught a tuk tuk to the bus station and had very lucky timing. We followed the bus driver onto the bus and were seated as it pulled out of Chiang Kong. Fares were collected on the bus and the cost to ride to Chiang Rai was 65B/ person ($2.00). The bus was old with small seats. Jon and I took up an entire seat each with our luggage. The bus traveled along local roads and stopped at wooden bus shelters where locals were waiting to board or disembark. By the end of the ride, most seats were full with two people in them. The ride wasn’t bad, and the roads much better than Laos’ roads. 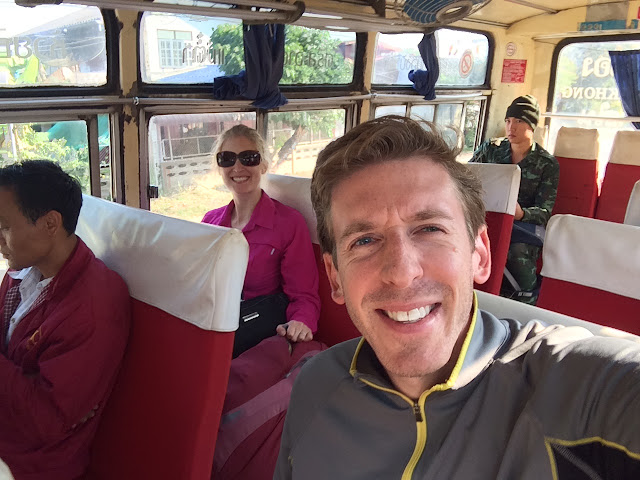 We pulled into a large bus stop in Chiang Rai, gathered our stuff, and left the bus. Instantly a tuk tuk driver was at our side trying to sell his service. We thought we had enough time to do at least one thing in Chiang Rai, but weren’t sure if that would be the White Temple or just walking around. When we couldn’t shake the tuk tuk driver so we could discuss what to do privately, we asked him how long it would take if he drove us to the White Temple and then the airport. We also haggled him down in price quite a bit and ended up having him take us to the temple, wait one hour, and then take us to the airport for 450B ($14).

The White Temple, or Wat Rong Kum, is an artist’s creation started in the 1990’s. What surprised me the most is that it appears to be a functioning temple with some spaces where people were praying and lighting incense and candles. I also appreciated that the White Temple was free to enter and provided complimentary wraps for ladies who were showing too much leg to respectfully enter a traditional Buddhist temple. 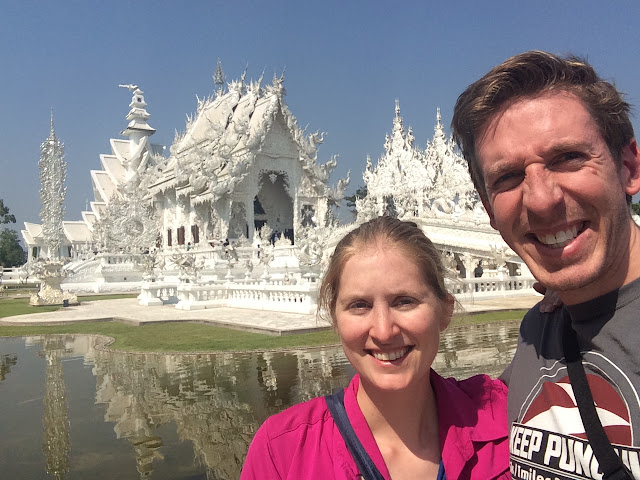 From the outside the White Temple is bright white. As you walk closer, it sparkles and you can start to see that it is adorned with thousands of silver tiles to accent the decorations. Scattered around the temple are water features and white statues. The first one that caught our attention was a sea monster fountain spraying water. The trees outside of the temple have sculptures of humanoid heads hanging from them. The temple has a long walk away leading up to the entrance. The walk starts by spanning a pit which from which arms, hands, and faces reach up out of the ground. Some of the arms are holding bowls and visitors can put donations into the bowls. 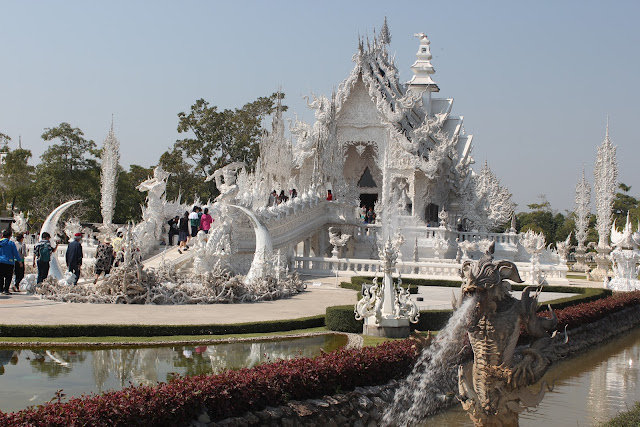 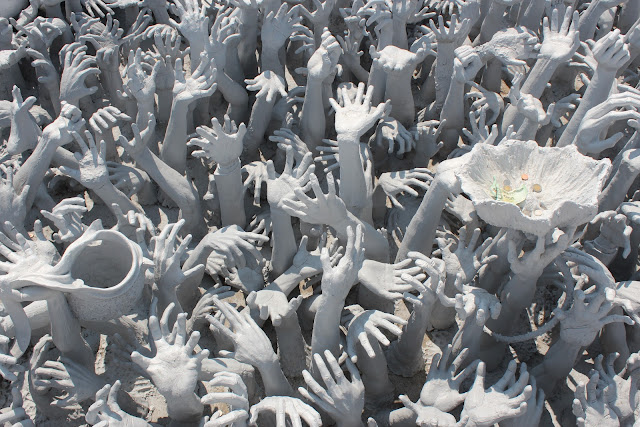 When you reach the ubosot, main building, you are asked to remove your shoes before entering. Unfortunately, photographs are not allowed inside of the White Temple. In the ubosot is a traditional Buddha statue and a very life like wax monk meditating. The rest of the temple is much more unique. A mural covers the remaining walls. The mural is particularly interesting on the wall with the door. From afar it would look like a fiery demon face, however up close it is composed of modern characters and depictions of events. Some of the items we were able to identify include superman, a minion (from Despicable Me), Hello Kitty, Neo (from the Matrix), Star Wars references, the twin towers on fire, Michael Jackson, Freddy Kruger, Elvis, Spiderman, and Batman. According to Wikipedia the intent of the mural is that ‘people are wicked’.

In May of 2014 an earthquake damaged part of the temple, and when we visited there were two large segments of the mural missing where structural columns in the walls were exposed. Behind the building are bridges to two other buildings, both of which lack decoration and appear to by unfinished. 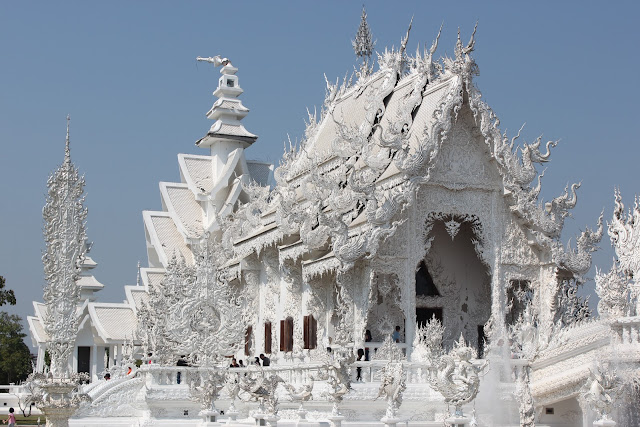 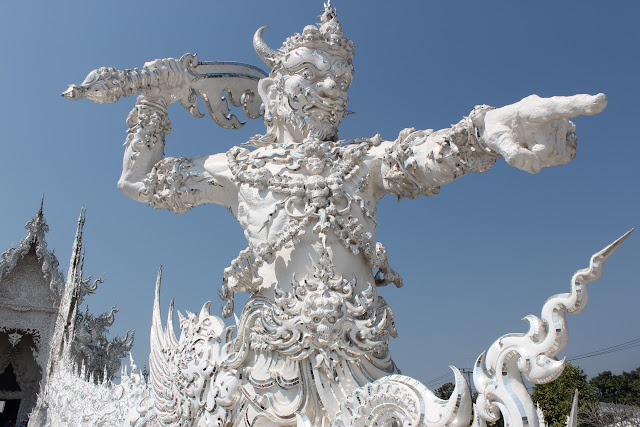 We got the airport with plenty of time to wait for our flight to Phuket. We were flying on Bangkok Airways, which offers the economy class many amenities that would usually be restricted to business class. Although the Chiang Rai airport didn’t have a Bangkok Airways lounge, the gate did have a small table of refreshments for customers. 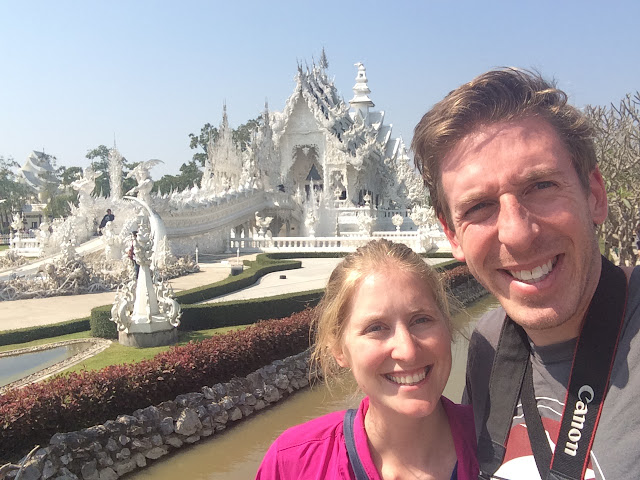 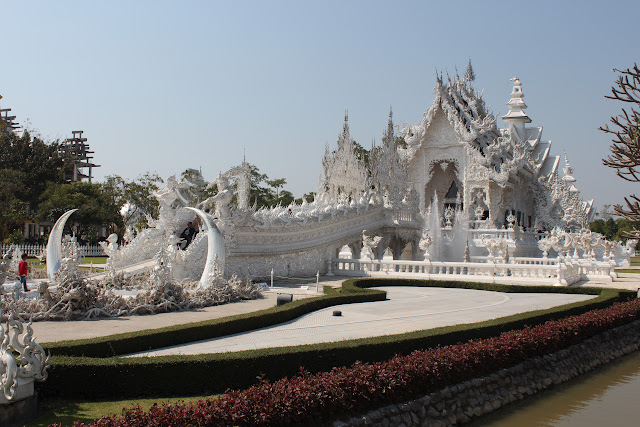 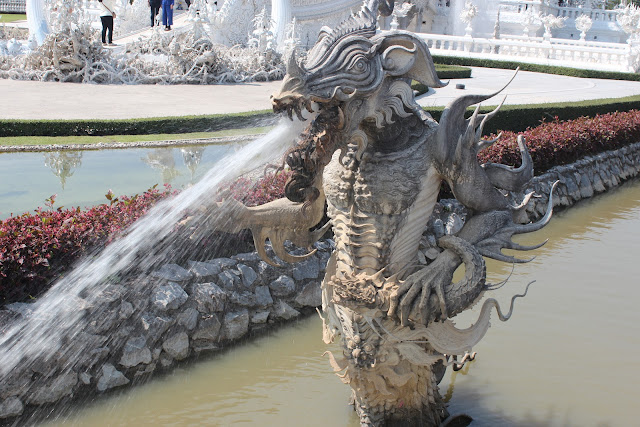 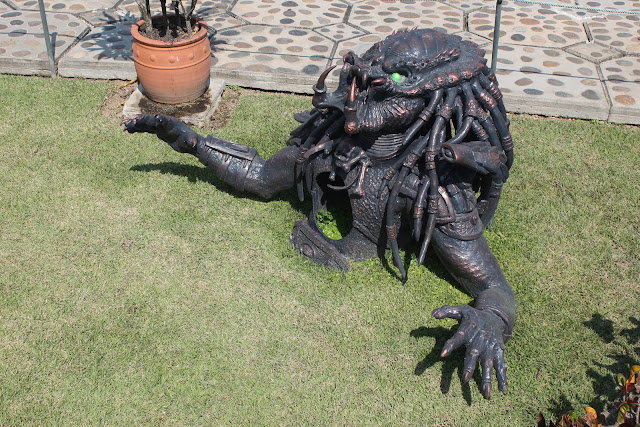 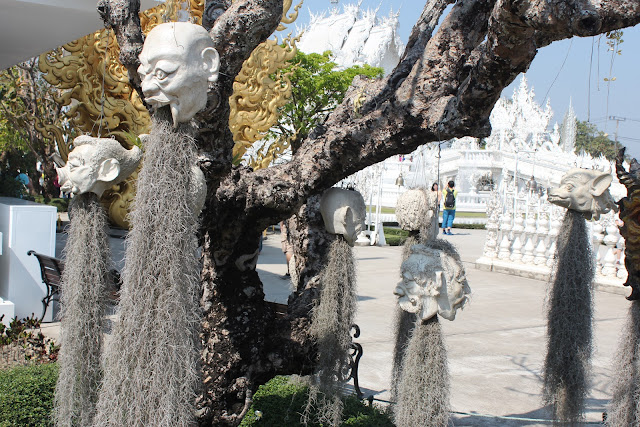 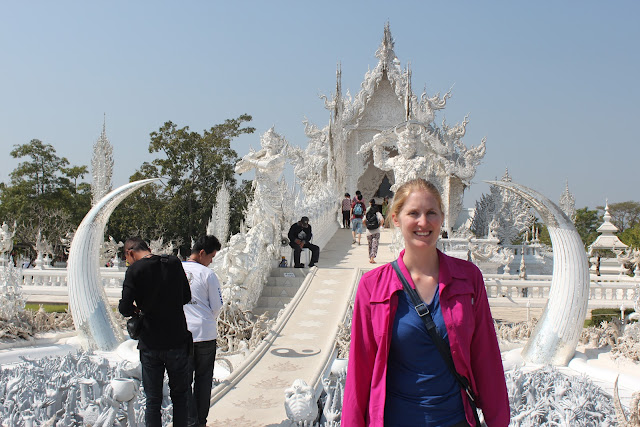 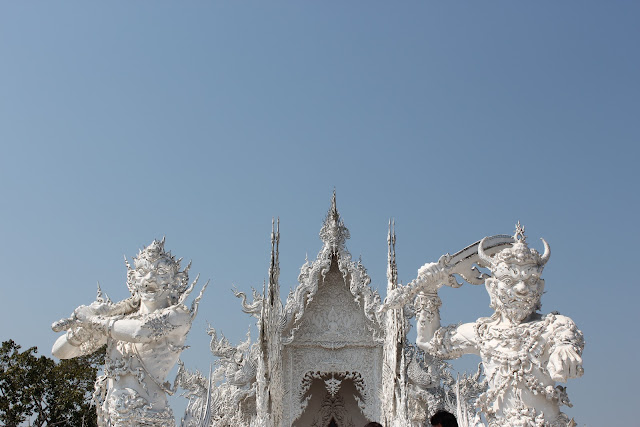 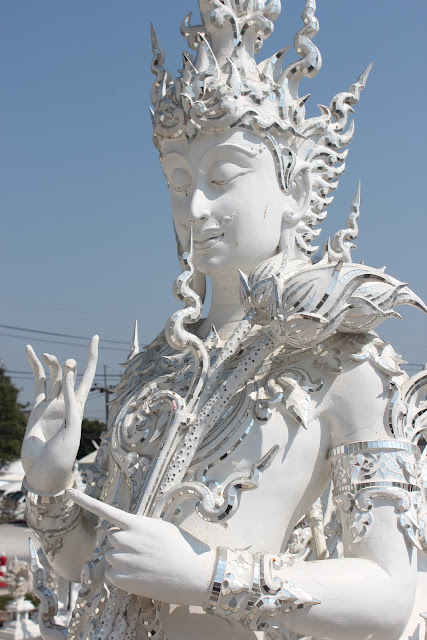 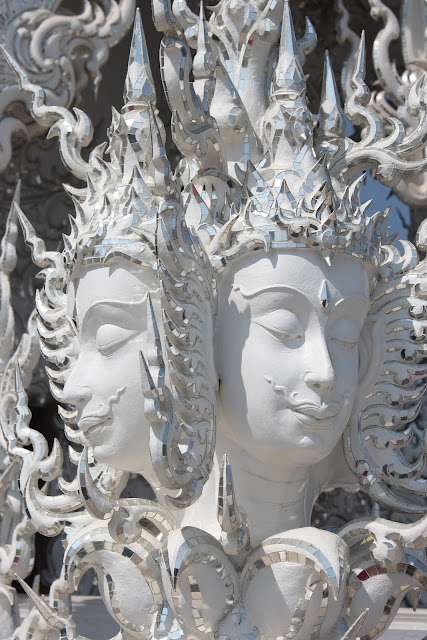 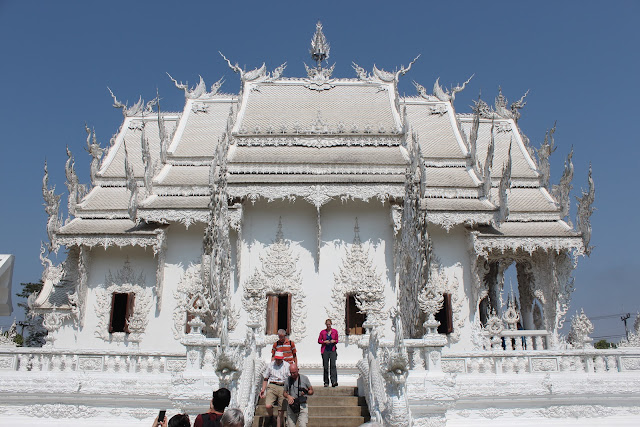 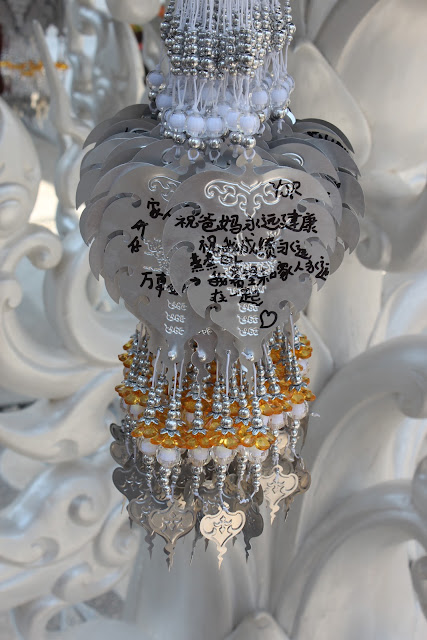 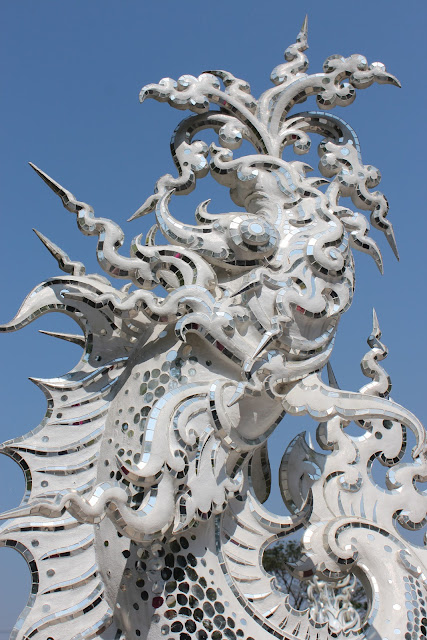 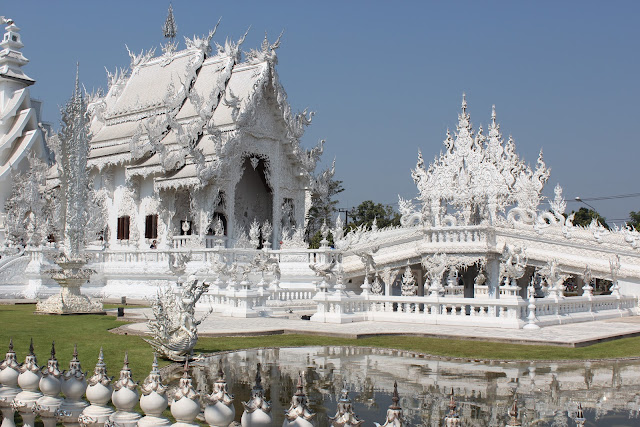 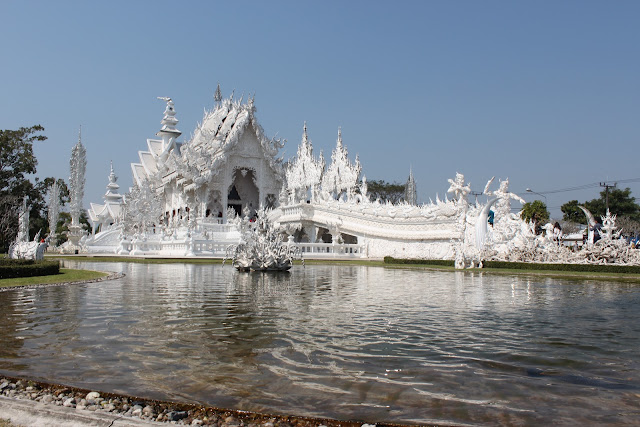 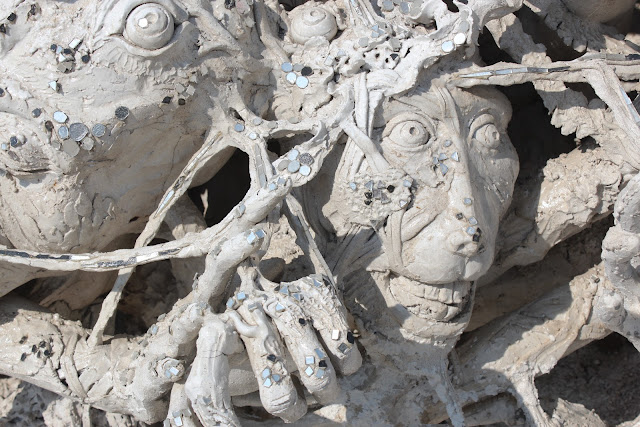 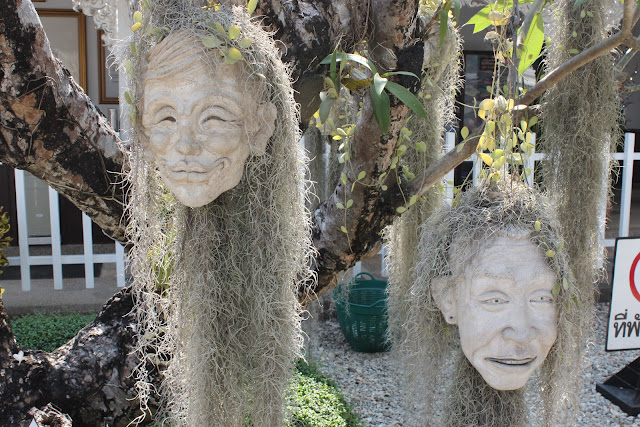