Phuket used to be the go to island off of the coast of Thailand. In recent years, some parts gained a reputation for being crowded and sleazy. Still, Phuket is one of the largest islands and a great transportation hub for the rest of the Andaman Sea, so we spent two nights on the island.

We arrived very late in Phuket. Patong, the beach town we were staying in, is across the island from the airport. Because of the late hour, the only options of transportation were private cabs or a shared mini-van. The shared vans don’t leave until all of the seats are filled, so we joined 3 others and waited for more planes to land and more people in need of transportation.

We checked into our hostel, Bodega, and went promptly to bed. Even though it was pushing 2am, we found most of our roommates awake and talking. Bodega was cheap and in a good location, but it was a typical hostel with bunk beds, old furniture in the lounge, and poor air conditioning. It was only after we booked the hostel that we remembered that our friend advised us against staying in Patong, as it has become a sleazy party town. Regardless, we decided to deal with it and look forward to the rest of our island hopping.

The day started out slowly as we stayed in the hostel and worked on planning the next few days of our trip. When the planning was done, we were starving and left to look for lunch. We went to Halfway Inn which Jon had read about on Trip Advisor. Halfway Inn is owned by a Thai and an Aussie. The place was empty at lunch time, but the food was good and we enjoyed the meal. Before leaving, both the of the owners came over, introduced themselves, and talked to us for a while. We left with a few suggestions about what to do on Phuket and where to visit on some of the nearby islands. 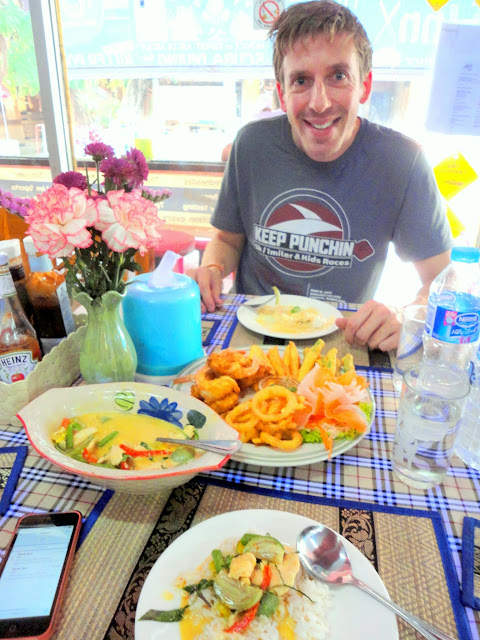 From lunch we walked to the beach. The beach was crowded but was beautiful! I, for one, was starting to think that Patong’s reputation was misplaced. The sand was nice and the water was clear and warm. Wading out into ocean I could see the sandy bottom for as far as I went. The mountains in the distance reminded me of Rio. Jon and I walked up and down the beach for a while just enjoying it. 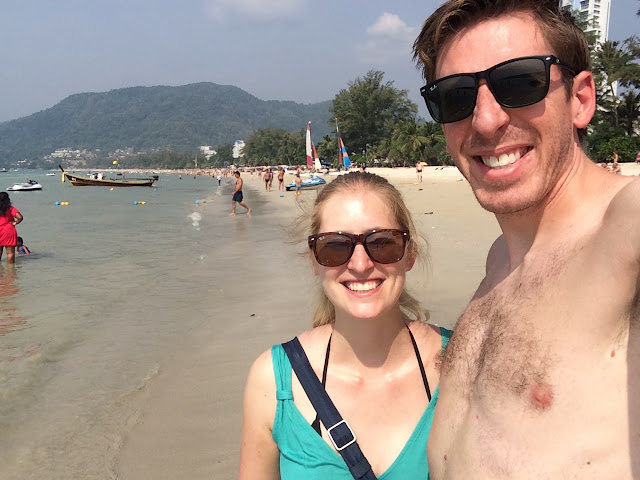 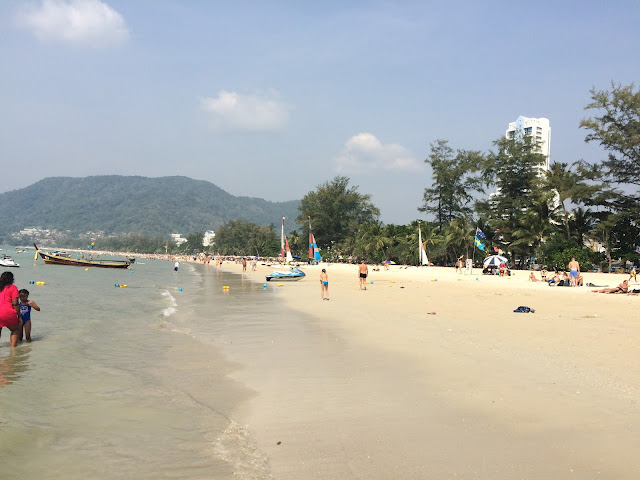 When we’d had enough of the heat we started down Thanon Bangla, also called the Strip, which is supposed to be the main street for nightlife in Patong. At this time of day it was mostly empty with a few large bars but not much going on. We continued on until we found Banzaan Fresh Market. The owners of Halfway House had told us about Banzaan. They said it was a traditional Thai market that tourists liked to visit for photographs and that it was a very clean market. Banzaan was probably the most organized market we have seen to date in Thailand and it reminded me of Reading Terminal Market in Philadelphia. Stands and stalls were well appointed and laid out. However, I think the organization eliminated some of the charm that other markets we had seen had. Live fish were the centerpiece of the market, and on a second level was a foodcourt of booths which would prepare produce, fish, or meats purchased below. 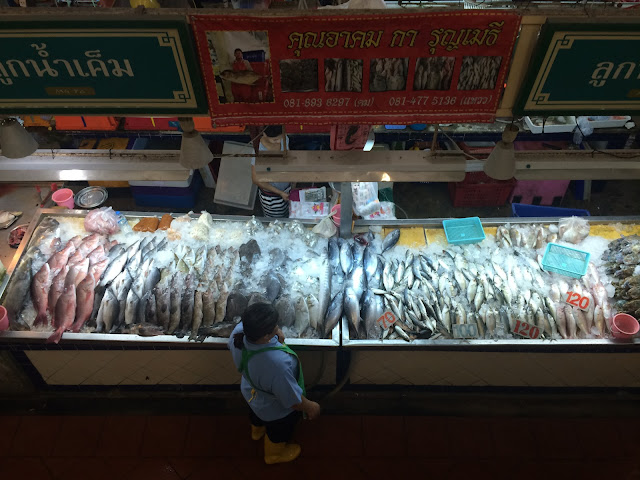 Wandering through the streets of Patong, slowly working our way back to the hostel, we passed Jungceylon Mall. Jungceylon Mall was modern and huge and likely a new addition to Phuket. The shopping selection didn’t interest us as much as the model junk (an Asian boat) in the outdoor courtyard and that there was a brewery. We found that it was happy hour at the Full Moon Brewwork so we sat down and had a drink. The brewery had 4 types of beer; larger, dark, wheat, and a seasonal. The brewery reminded me very much of a Rock Bottom or Gordon Biersch. Everything was organized and slightly trendy. We didn’t have any food, and thought the beers were just okay, although they were a nice change from Chang. 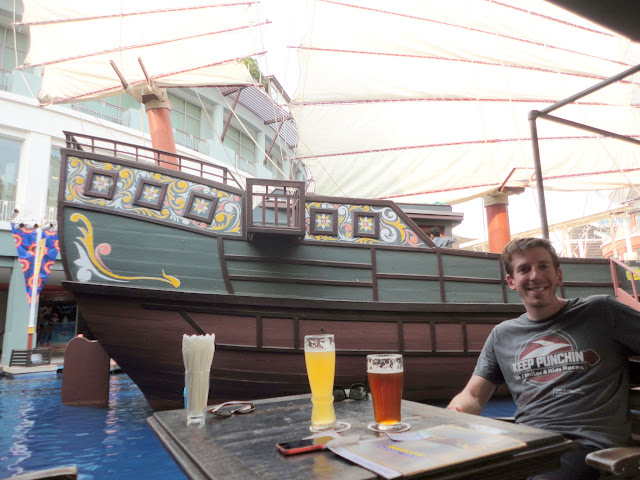 Back at the hostel we cleaned up for the evening, chatted with some of our roommates, and got a drink at the bar. Most of the others at the bar stayed there for dinner, but we wanted to go see what Thanon Bangla was like at night. As soon as we turned the corner onto Thanon Bangla it was apparent why Patong has gotten it’s sleazy reputation. Besides for the packed street, loud music, and drinking, we were also bombarded with flyers for ‘ping pong shows’ (if you don’t know, don’t ask) and every bar had girls (and sometimes ladyboys) dancing on stripper poles. Earlier in the day someone had referred to Patong as ‘a dirty old man’s playground’, and that seemed pretty appropriate to me. We walked to the end of the street even though the crowd and flyers never let up. We decided not to walk back through Thanon Bangla and instead to find another street to eat on. Most of the other streets we wandered down were quiet. We finally ate at Song Pee Nong which was low key and pretty good. 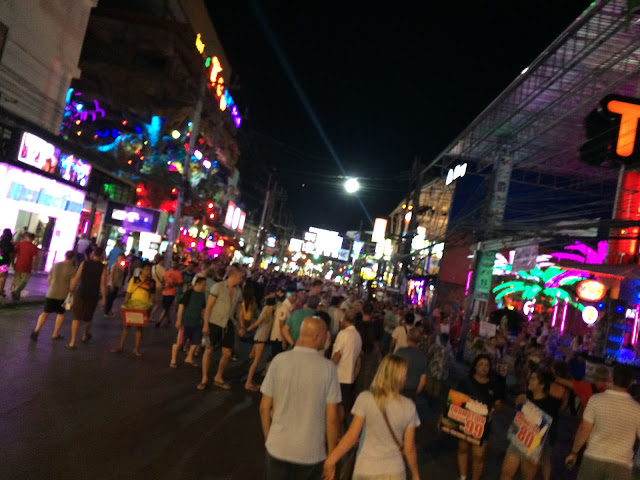 We didn’t have much time in Phuket on Sunday morning because it was time to move on to other islands. Surprisingly, most of our roommates were up early packing. Many of the younger backpackers in the region were traveling across the country to Koh Phangan for the Full Moon Party on February 3rd. We finished packing up our bags, ate breakfast at the hostel, and got a ride to the pier for our ferry to Koh Phi Phi.

Money: The local currency in Thailand is the Baht. Credit cards are more widely accepted in Thailand, however cash is needed in smaller stores, for taxis, and street food. Some places may charge an extra 3-8% if paying with a credit card. The exchange rate was 34 Baht = $1.00 .

Visa Information: For American tourists traveling to Thailand for less than 30 days, the need for a visa is waived. Simply wait at Thai immigration and have your passport stamped. There is no fee if you are staying less than 30 days. In our case, we are traveling through Thailand several times and because it is a transportation hub, each time we leave Thailand and reenter, our 30 day counter restarts.

Malaria: Unless you are traveling to remote areas of northern Thailand, there is no need for malaria pills. We still wear bug spray often though.

Pharmacies: Our friends living in Bangkok told us they find Boots Pharmacy and Watsons Pharmacy to be reliable. Once I knew to look for these names, they were everywhere.  Many medicines requiring prescriptions in the US are available over-the-counter in Thailand. 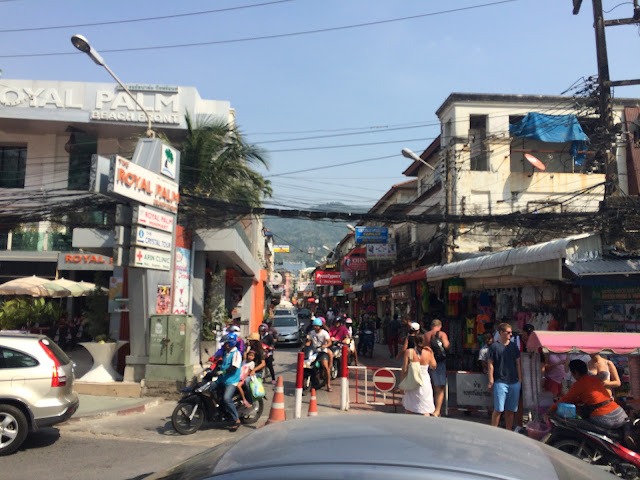 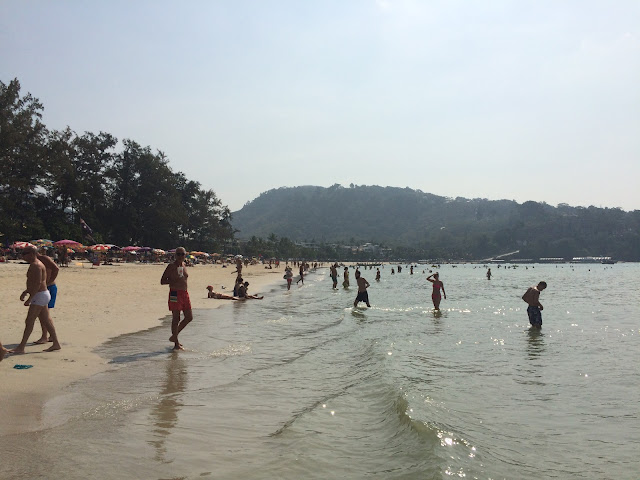 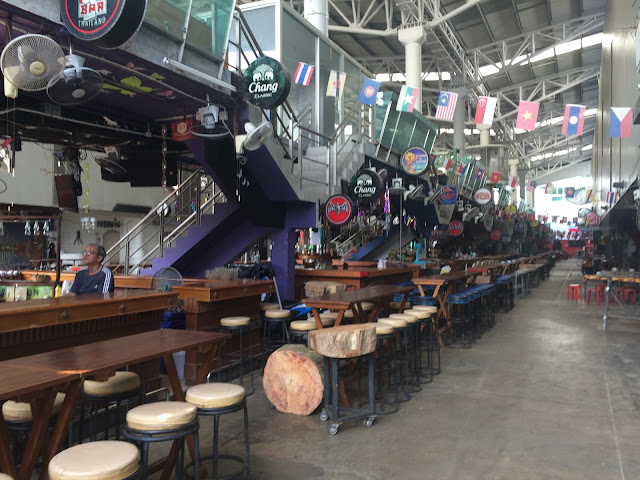 Thanon Bangla before the crowds 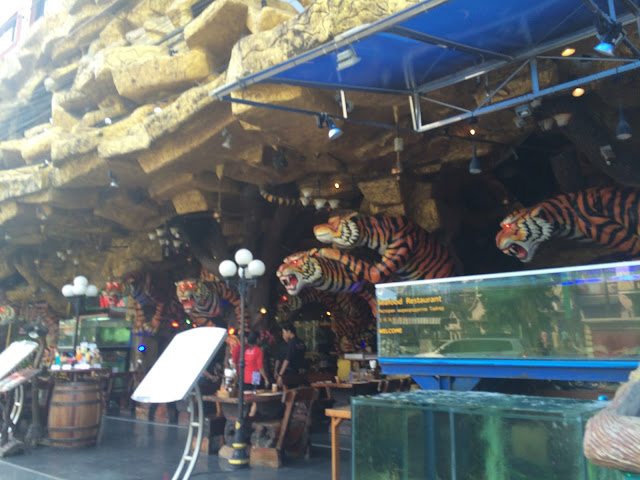 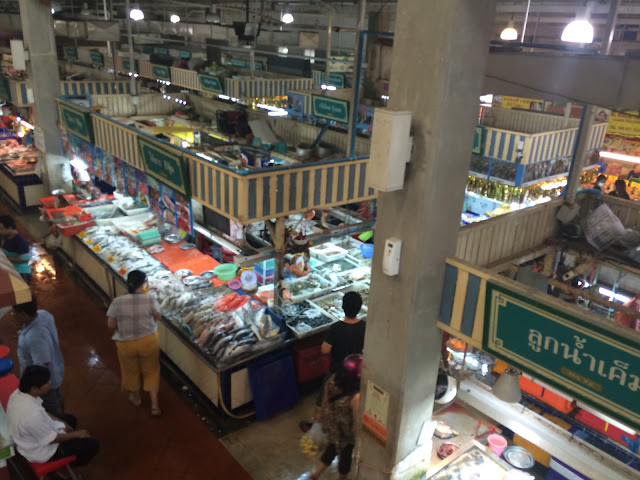 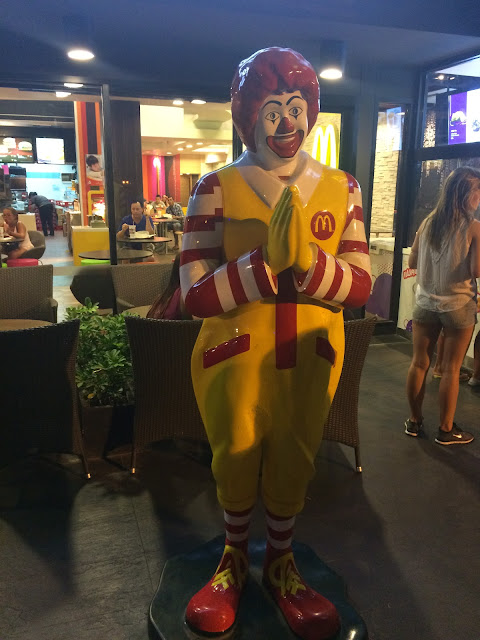