Taking a slow boat along the Mekong tops a lot of the lists of things to do in this region of the world. The boats slowly drift along calm waters, past small villages, and beautiful countryside. But a little research into the logistics of taking a slow boat revealed horror stories of overcrowding and bad facilities. Luckily for us the trip was very enjoyable and smooth sailing, so to say. 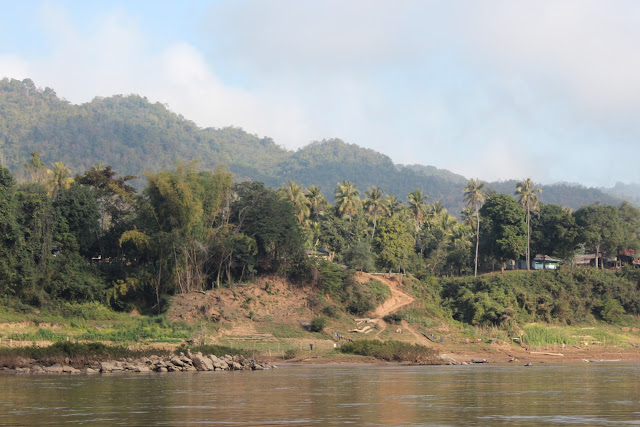 A tuk tuk, which we had arranged the night before, picked us up at our hotel before breakfast and took us to the slow boat pier 10 km outside of Luang Prabang. We had heard that it was cheaper not to buy tickets through a travel agent in town, so we had decided to take our chances getting a ticket at the dock. We arrived an hour early to make sure we got seats on what we had heard was an often overcrowded route. The ticket booth wasn’t open, so we walked down a steep muddy hillside to the boat and boarded it. We were the first people on the boat and had our pick of seats. When other passengers boarded the boat, Jon ran back up the hill to get us tickets from the ticket office. The boat started to fill up, but never filled to capacity, and a sprinkling of empty seats were left around the boat. At around 9am the slow boat pulled away from the dock and began our journey up the Mekong river. 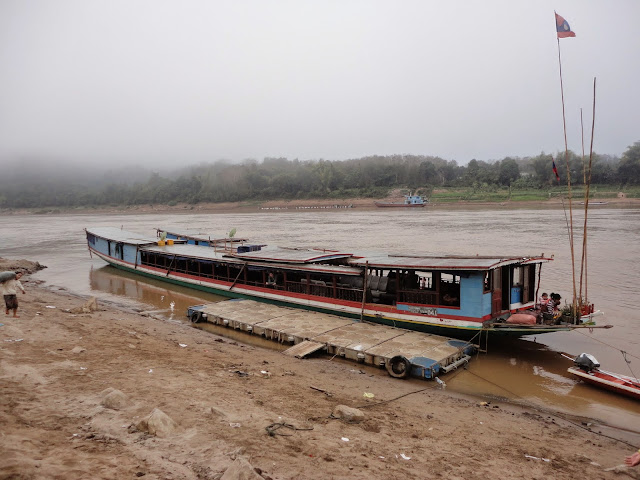 Our slow boat at the Luang Prabang pier

The slow boats and cruising down the Mekong are often talked about by travelers in this area. When we decided we wanted to travel by way of the river, we started to do a little research into methods and prices. We found that most travelers go downstream, while we would be going upstream. There appear to be similar cruises in both directions, however the upstream cruises were less publicized online which made it seem a little more daunting to plan ourselves.

There seem to be three main methods of travel along the Mekong; luxury cruises, speedboats, and slow boats. The luxury cruises were typically 2-3 nights (3-4 days) and included accommodations and meals for around $600. The speedboats make the trip in a mere 9 hours but are considered extremely dangerous due to their reckless drivers. 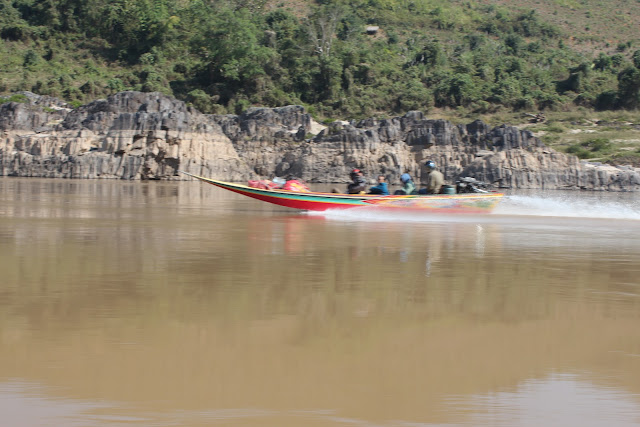 Finally there are the slow boats, which are a form of public transportation for the locals and travelers. Slow boats have motors but are not speedboats which is why they are considered ‘slow’. The journey between Luang Prabang and Houng Xia (on the Thailand boarder) consists of two 9 hour days on the slow boat and one night in a small village, Pak Bang. 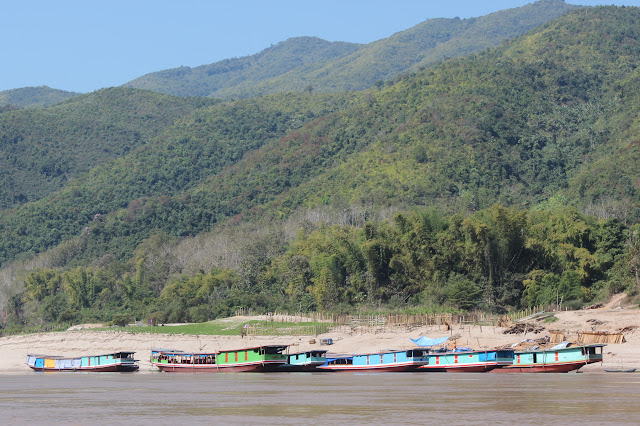 The slow boats are long wooden boats that are mostly open air. The front of the boat is outfitted with wooden benches and cushioned car-style seats in rows. Towards the back of the boat is a covered living quarters for the captain and his family who are also the boat’s crew. My understanding is that the longboats are the crew’s full time house. The boats also have a small snack bar, where drinks and instant noodles can be purchased, and a tiny bathroom. (There are also signs in town for VIP slow boats which include meals and accommodations but we didn’t hear too much about these and I don’t think that they run daily.) 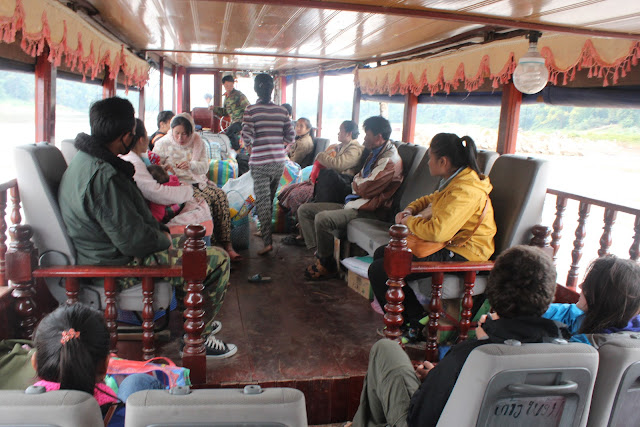 We found horror stories and rumors about overcrowded boats and boats without cushioned seats, snack bars, or toilets. People who were seated near the rear of boat also complain of engine noise and fumes. It was recommended a few places that you see the boat before booking to make sure it has the amenities you want.  Then if it becomes overcrowded, we read that if the group complains in mass, the captain may find a second boat.

Our boat ride was nothing but enjoyable. The boat wasn’t crowded and was much more spacious than a bus would have been. The boat was also a smoother ride than the bus and had the benefit of the snack bar, bathroom, and being open air. 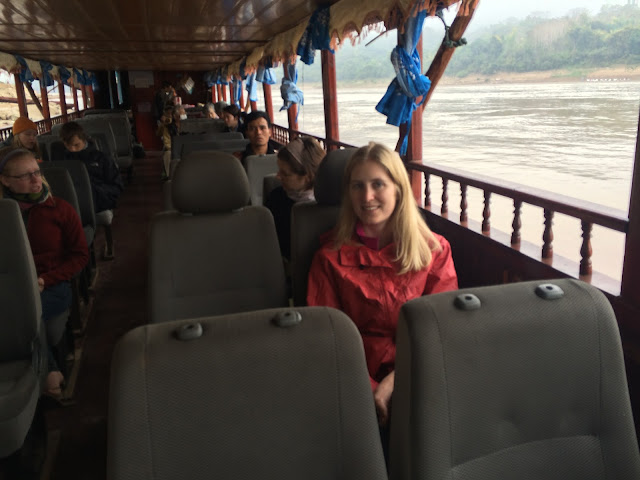 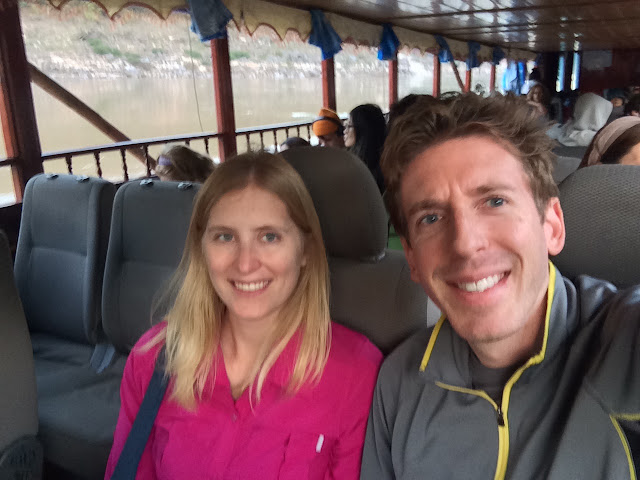 In the morning when we left, it was a bit chilly and the boat was windy. The boat went upstream passing by remote villages and farms. A few times locals on the shore would flag down the boat and board. Other times our boat would pull over at a homestead to let a passenger disembark. For the most part these stops were not at piers or even docks, but instead sand banks within view of a few homes.  The boat would either pull up to the bank, or even ram itself into the sand. Generally speaking, the Mekong River had very little boat traffic on it and only occasionally would be pass another slow boat or speedboat. 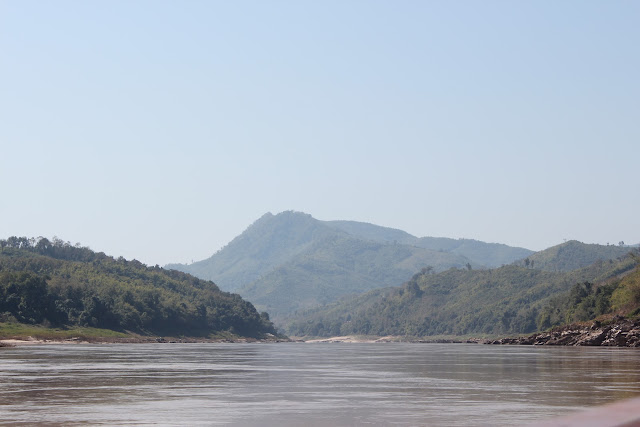 As the day progressed it got warmer and we shed our hats and jackets. By mid-day the air was warm and the breeze from the moving boat felt wonderful. The jungles on the mountains were layers of green on green as ivy covered the trees. Water buffalo, cows, and goats would graze on the banks or wade into the water for a cool dip. Local villagers would be at the water’s edge washing clothes or motorbikes or in the fields working. Between 3pm and 5pm, when the day was at its hottest the people would wade into the water bathing themselves and their children. For the most part we enjoyed the scenery and the fresh air. We tried to read and do crosswords a little bit, but we we didn’t want to miss anything. We ended up listening to podcasts on our phones while staring out of the boat. 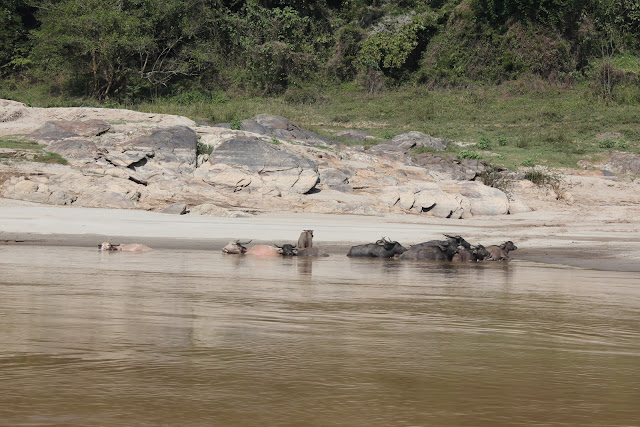 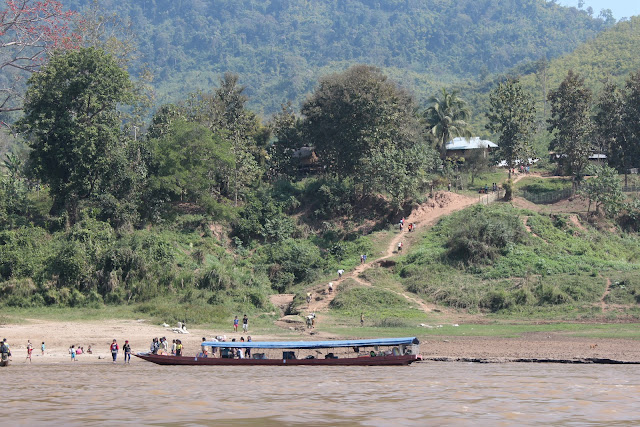 Once we had some engine trouble shortly after pulling on shore to let a passenger out. For 30 minutes we drifted near rocks while the crew pushed the boat in different angles with bamboo poles. It seemed like a close call, but the crew probably had it under control. If I had to guess, I think the steering mechanism was stuck, but they got it working again and we continued.

After dark, around 6:30pm, we pulled into the pier at Pak Bang, our midway point. From the boat, we carried our bags up a very steep dirt hillside to the main road in town. The street was lined with restaurants and guesthouses, most offering rooms with A/C, wifi, and hot water for 100,000K ($12.50). We managed to get a room for 80,000K ($10.00). For dinner we went to an Indian restaurant where the young waitresses spoke very good English. I believe the restaurant was owned by an Indian (who we saw around managing the floor) and who seemed to be doing the best he could to make real Indian food in Laos. The food was good and tasted home cooked, although not quite like Indian food in the US. The portions were also a bit small. In the restaurant we observed almost everyone else from our boat. 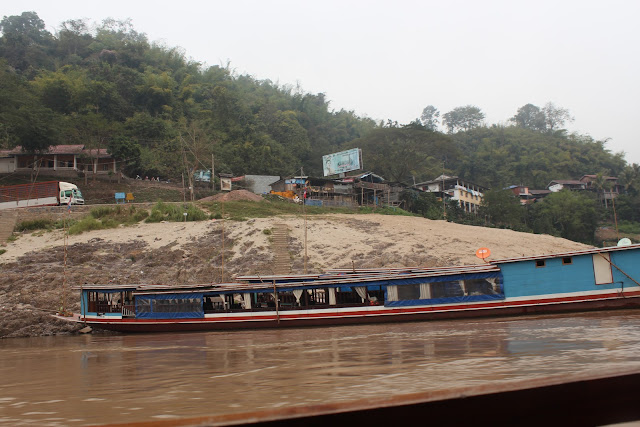 We woke up early to start the second part of our slow boat journey. On the way to the pier we stopped to buy some fruit and sandwiches to eat on the boat. Pak Bang knows that this is what the travelers want and when we walked through the town, every establishment had a sandwich stand set up. 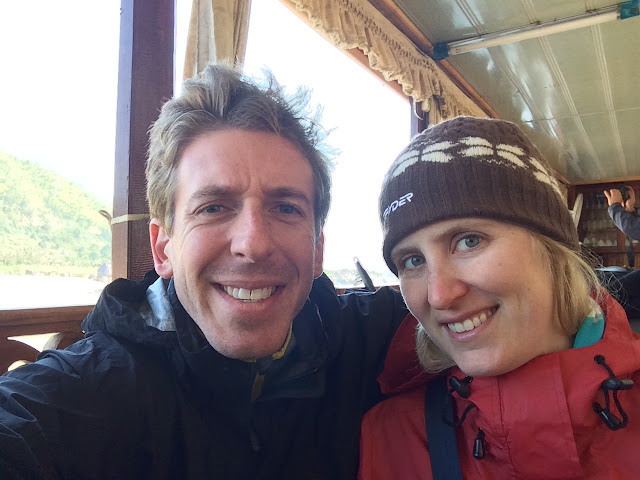 For the second day, we were on a different, but similar boat. This time the boat had less of the car-style seats and more wooden benches. The captain also requested that everyone remove their shoes prior to entering. It had a nicer bathroom, so it was an okay tradeoff. The ride was very similar to the previous day’s. Mostly the same couples sat scattered around the boat. The morning was cool but warmed up nicely. The scenery was the same and the villages similar. We saw more water buffalo, more cows, and more goats. More locals washing clothes, bikes, and themselves in the water. 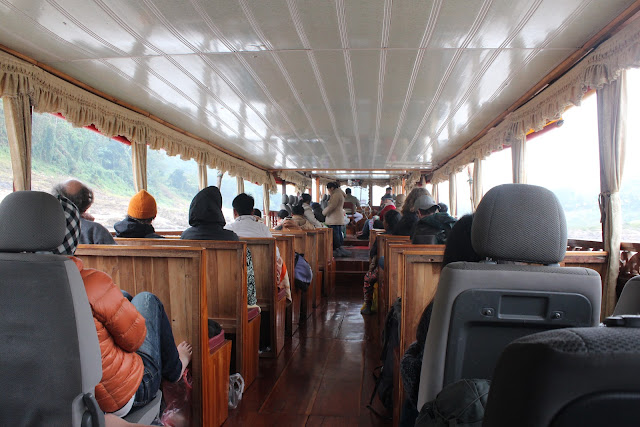 Sometimes when traveling you don’t have a big plan and take some risks. This evening was one of those nights when everything seemed to work out right without even trying. We were expecting to spend the night in Huang Xia because the traditional border crossing (taking a longtail boat across) closed at 6pm. However, we joined another couple from our boat and found that a new bridge kept the border crossing open all night. We were able to share a tuk tuk with them to the Laos / Thailand border. At the border we had no problem exiting the country and we were also joined by another 5 people we recognized from our boat. The 9 of us paid for a bus which crossed the bridge and left us at the Thailand entry point. We crossed into Thailand. (Note: We had heard that land crossings into Thailand only provide a 15 day visa as opposed to an air entry which gives a 30 day visa. However, we were given 30 day visas.) A tuk tuk driver was waiting to take people into Chiang Kong. Because we now had 9 people, we were able to hire her for cheap. The driver also told us she could recommend a hostel which would accommodate all of us. On our way to the hostel, she even stopped at the bus stop to show us where to buy tickets to continue on the next morning. Eventually she let us out at the Green Inn, which provided us with private rooms and a shared bathroom for 200B ($10.00) / room.

Six of us decided to go get dinner together and followed the recommendation of our hostel to walk to the Bamboo Restaurant. When we arrived at Bamboo we saw the sign was for “Bamboo Mexican Thai” and it was small with no staff in sight. We almost didn’t stay, but that would have been a big mistake. We waited a minute and were seated by a Thai man who looked like a combination of Mr. Miyagi (Karate Kid) and Tommy Chong. We found that this man and his wife owned the restaurant and cooked everything. Although he obviously took pride in the food he prepared from scratch, he refused to describe his food as ‘good’. He told us everything on the menu was ‘no good’. We had quite a few laughs with him throughout the night and enjoyed our meal there. The other couples were also very interesting and my only regret is that we all didn’t meet sooner on our two day boat ride together. 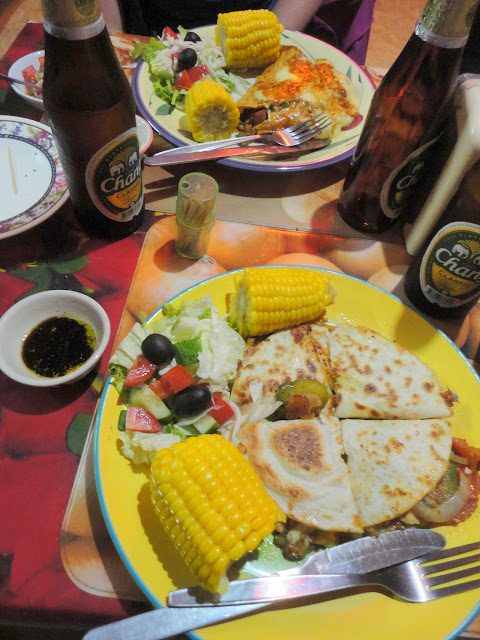 The bus to Chiang Rai ran every hour, so we decided not to rush ourselves and to enjoy breakfast with our new friends and return to Bamboo. As if the owner an wasn’t reason enough to return to Bamboo, most of our group was excited to have the homemade brown bread which we had sampled at dinner. Once again Bamboo didn’t disappoint. The coffee lovers in our group were the most satisfied they had been all trip. At 8:45am we caught a tuk tuk to the bus stop and bid Chiang Kong goodbye as we took the 9am bus to Chiang Rai. 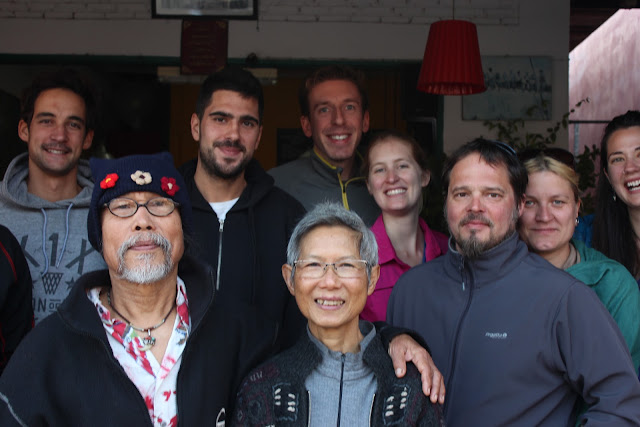 We found an account of a slow boat journey on the blog FreeWheelin which served as great reference for us. Our experience on the slow boats was nearly identical to the one they describe. 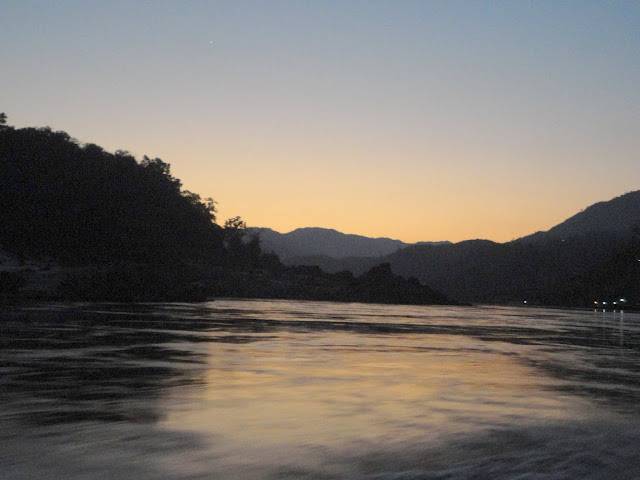 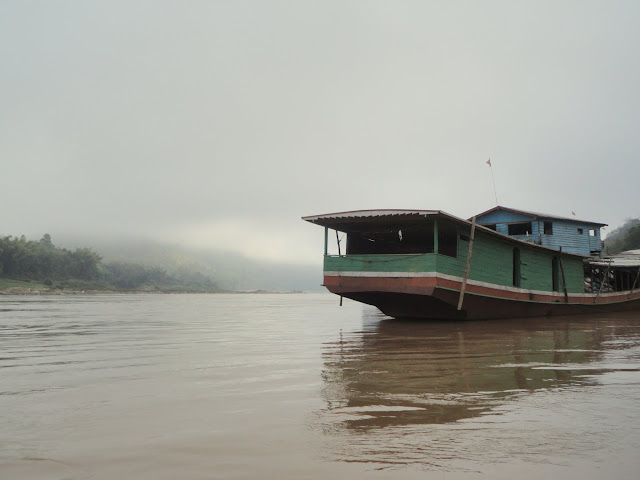 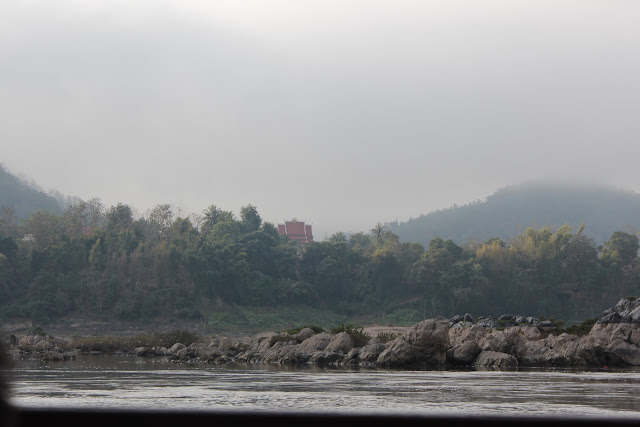 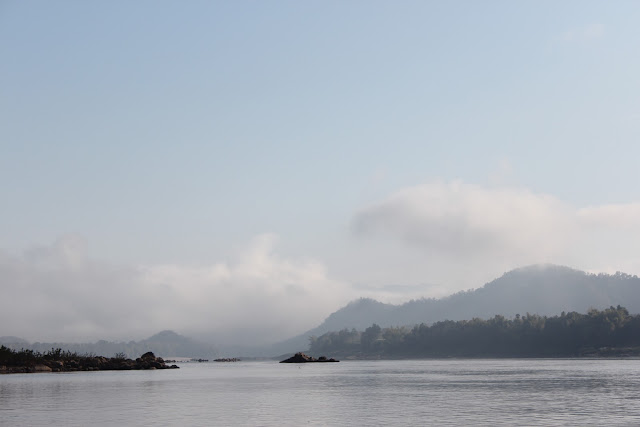 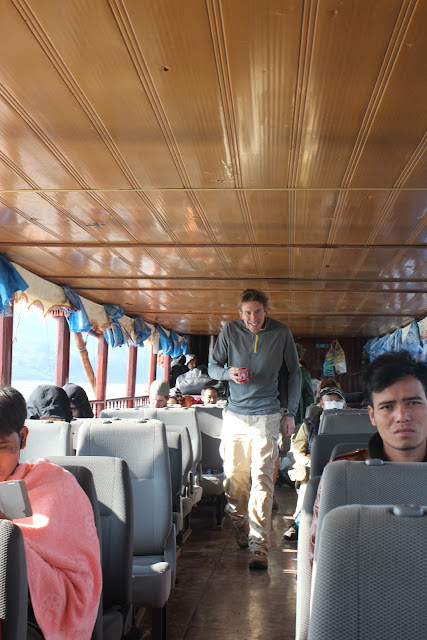 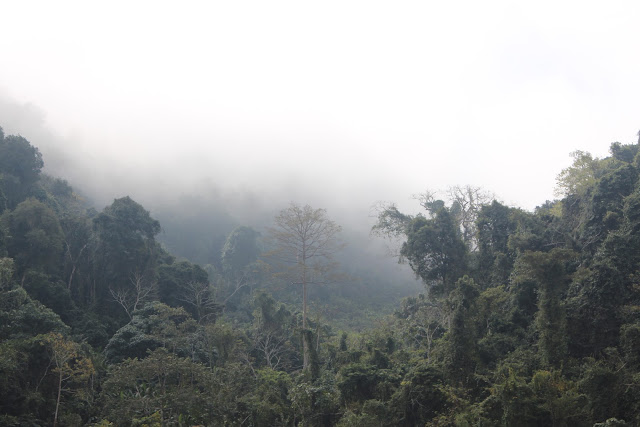 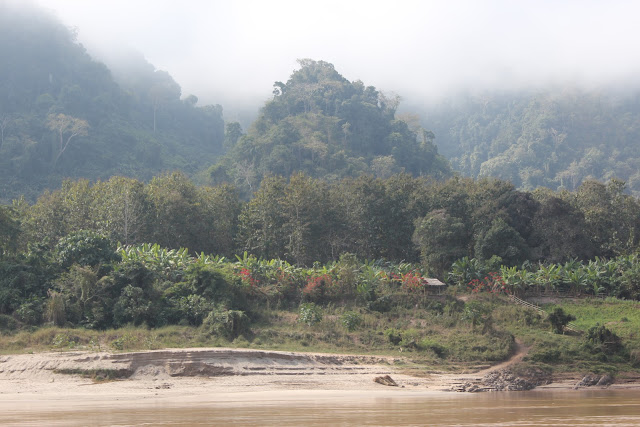 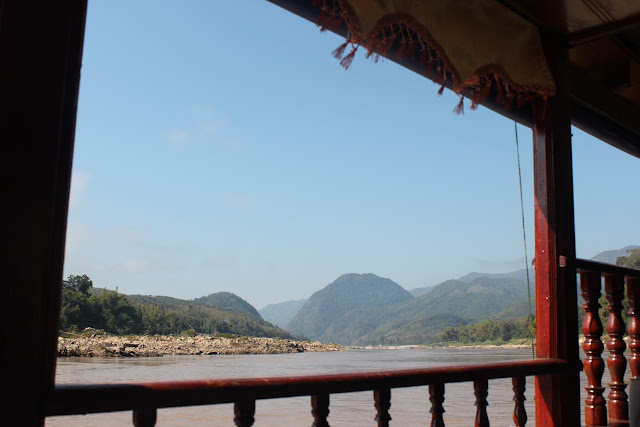 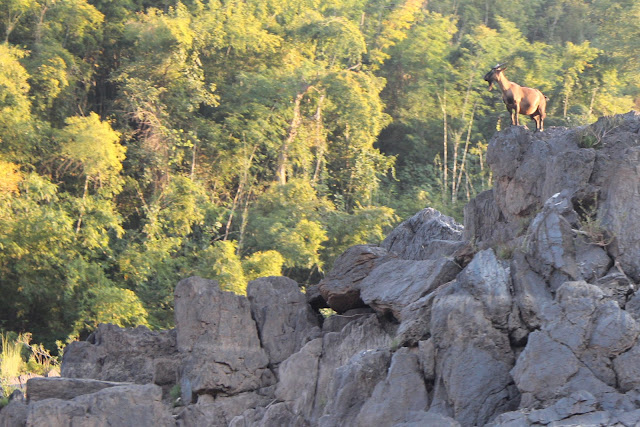 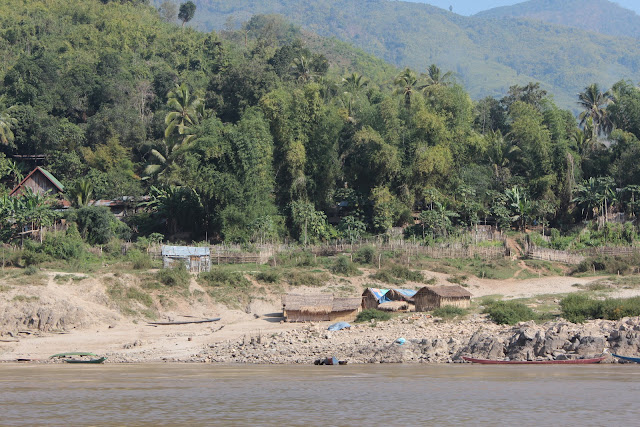 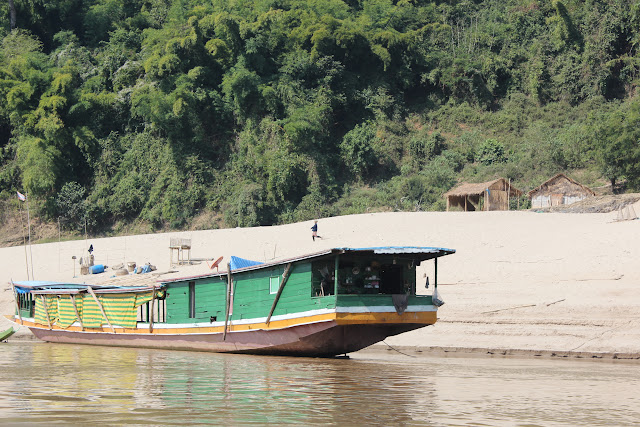