Mammoth Cave was our final National Park of the road trip and was one of the most difficult. We opted to forgo the traditional tours and instead we spent 6 hours crawling, climbing, squeezing, and contorting ourselves on the spelunking-style Wild Cave Tour.

Our day started at 8:30am when we checked into the visitors’ center. At 9am we met the two park rangers who would be our guides and boarded a bus to the gear sheds. Each person was outfitted with coveralls, gloves, knee-pads, bandana, a helmet, headlamp, and fanny pack just big enough for a sandwich and bottle of water. 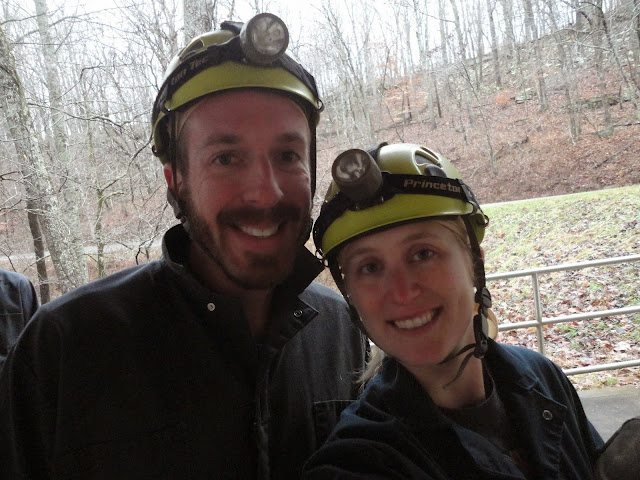 Back on the bus we were taken to the Carmichael Entrance of the cave. We were barely in the door of the entrance when we saw the first bat of about 4 that we passed on the tour. We had a quick safety talk before jumping right into a 100 foot crawl through a rock passageway about 3 feet tall by 3 feet wide. This would become one of the largest passages we crawled through all trip. 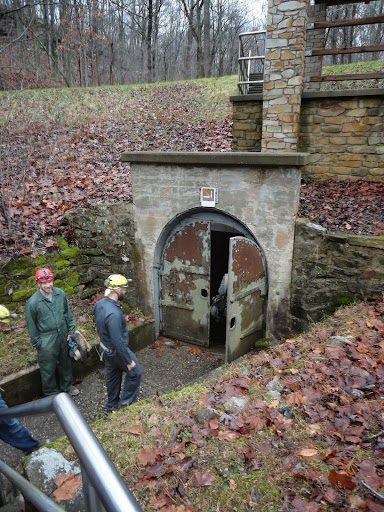 We stopped for a quick break while the rangers explained how the Wild Cave tour worked. The first 2 hours of the cave tour go off trail and come back again to the Grand Avenue. There were numerous obstacles that the rangers can pick from depending on the group’s ability and speed. The ultimate destination of the first 2 hours was the Snowball dining room where we would stop for lunch. 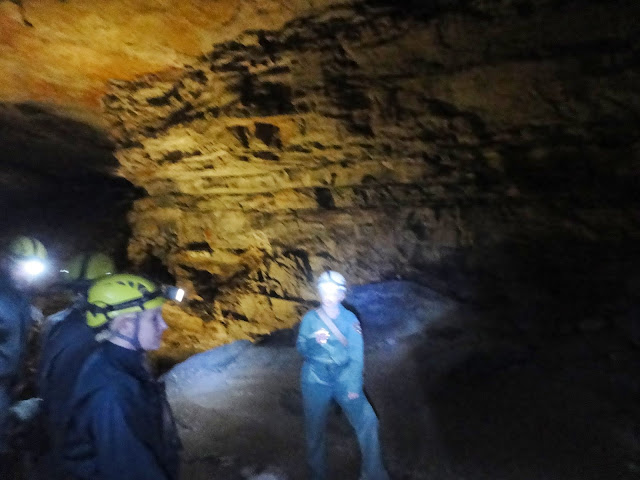 Our group was smaller than the normal tour size and consisted completely of adults looking to be approximately 30. This allowed us to move fast and tackle most of the obstacles. We continued on to an obstacle that Ranger Torie described as a ‘Z’ crawl. In this location a flat slab of stone had fallen; you approach by army crawling on the ground to where the slab lays. At this point the fallen slab raised the cave floor by approximately two feet and the ceiling was also two feet taller where the slab had fallen. With very little room you had to maneuver over the top of the slab. We also crawled past ‘castration rock’, a large rock in the middle of a hole to crawl out of. 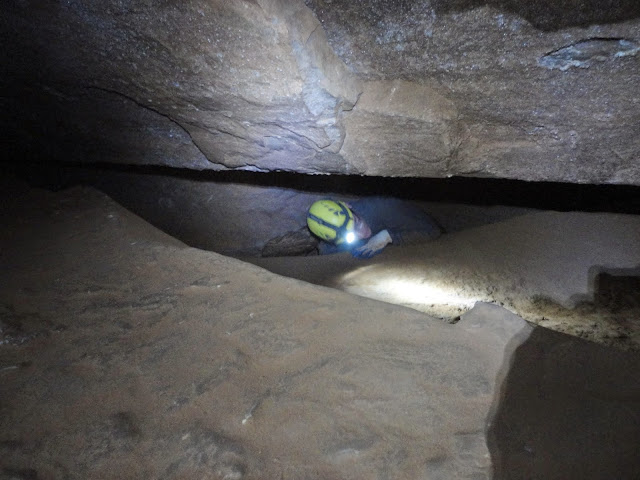 A fellow caver coming over the Z-slab

The rangers didn’t waste much time in deciding to take us to what they called ‘Katherine’s’. We crawled on our hands and knees to another small room where the Rangers Torie and Jackie told us the story of Katherine. She was a ranger leading a tour group years ago who discovered a small passageway when her group asked her where a hole went. After the story, Ranger Torie stood up, and promptly wiggled into what appeared to be a small pothole in the floor of the room, which surprised everyone sitting around her, as no one noticed it. After shimming on our bellies for over 30 feet, we emerged in another part of the cave. The morning was very crawling heavy as we weaved our way deeper into Mammoth Cave. 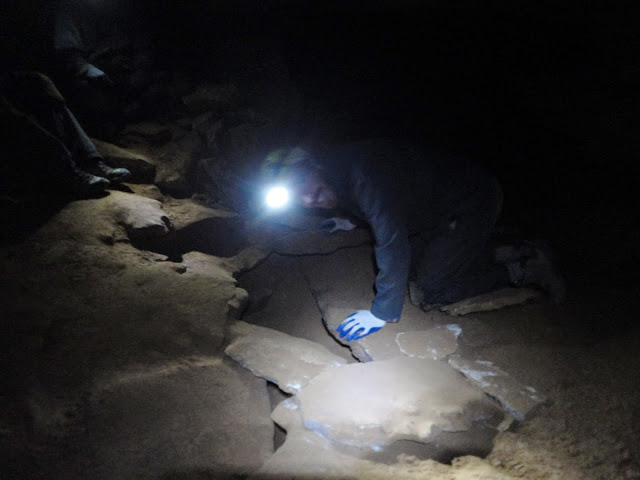 Jon about to enter Katherine’s obstacle 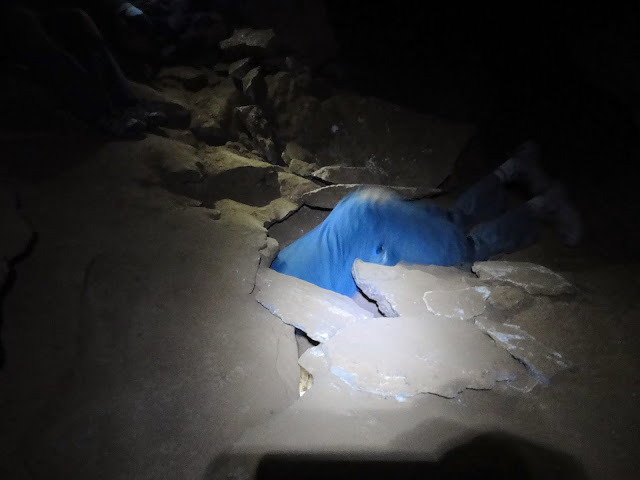 Lunch was 2 hours into the tour at the Snowball Dining room, named for the formations of gypsum on the room ceiling. The dining room was outfitted with picnic benches, electric lights, running water, and even bathrooms.

The tour continued on for another 4 hours after eating. The afternoon half of the tour started by walking through canyon walls similar to a slot canyon above ground. At times the floor dropped to another level and we had to continue along the length of the canyon by ‘canyon walking’, walking with each foot on a small ledge on the opposite walls. The canyons themselves are awe inspiring, looking up to a stone ceiling far above our narrow corridor. Along the way through the canyons we passed a rock formation called Lion’s Head which looked like an open lion’s mouth with small stalactites forming teeth. At one point we went to the Cathedral Dome, a beautiful vertical shaft of rocky walls. 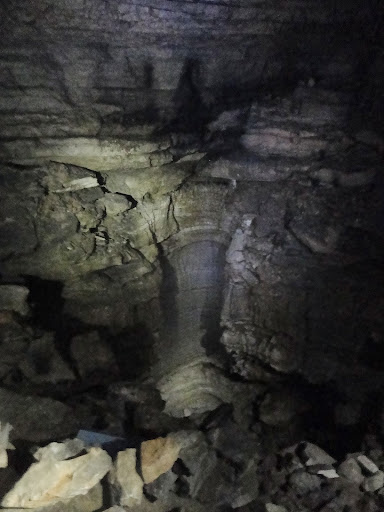 There were still plenty of obstacles in the afternoon and our group got to try a lot of them. One of the fun ones was the Sewer Pipe, which led to the Double Barrel. The sewer pipe was a tunnel large enough for a regular crawl, but beautiful clear water ran along the bottom in a track it has cut into the rock. When you reached the double barrel you have a choice of two tunnels stacked on top of each other. The lower tunnel was said to be wider but had water running through it. The upper tunnel was dryer but a bit smaller. Alternating between the tunnels as the guide suggested, Jon took the lower route and I took the upper. 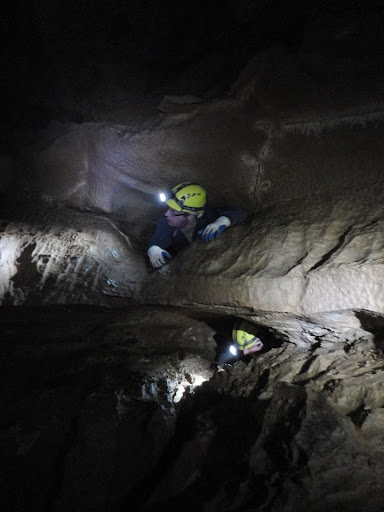 The hardest area, in my opinion, was called ‘No Name’. It was called this because all of the names given to it can’t be repeated to tour groups. No Name started out like the other crawls, but the ceiling got lower and lower to the point where you are lying on your stomach only able to pull yourself along with your fingers and push with your toes. The lowest point is so small that you must turn your head sideways and aren’t able to turn it back until you are out. Eventually the ceiling raises enough that you are able to roll your body for the remaining 50 feet.

Besides for crawling, there was also some bouldering on the hike. One obstacle was The Manhole; a vertical hole that you have to climb up through. The hole is so wide that most people have to practically do a split to put a foot on each wall.

We ended our hike with the Compass Needle. To get to the compass needle, we had to walk through Fox Canyon. Fox Canyon is where the introduction to caving tour does their 3 hour hike. We had 30 minutes to cover the same ground. The Compass Needle itself was described to us as such, “picture a 5 gallon bucket filled with gravel. You are an ant at the bottom of the bucket and have to climb your way out’. Climbing up to the compass needle did involve climbing up over rocks and boulders, often to go back the way you came, just one level higher.

We also saw a few of the areas that the normal walking tours see. One of these areas was the Frozen Niagara, which I feel is one of the most popular parts of Mammoth Cave. We also saw a gypsum formation called Tiger Lily.

When we emerged to daylight 6 hours later, we were sore, bruised, and covered in dirt. The park service took us back to the gear sheds where we returned our gear and cleaned our shoes. Mammoth Cave has found signs of White Nosed Bat Syndrome, a rash that results in the death of bats.  Cleaning our shoes was required so that we don’t inadvertently spread it to other caves.

Overall, Jon and I think that the Wild Cave Tour was one of the most memorable and unique days of our entire trip. We didn’t see the grandeur that most tourists do when they visit Mammoth but we definitely had an intimate experience into understanding the caves. 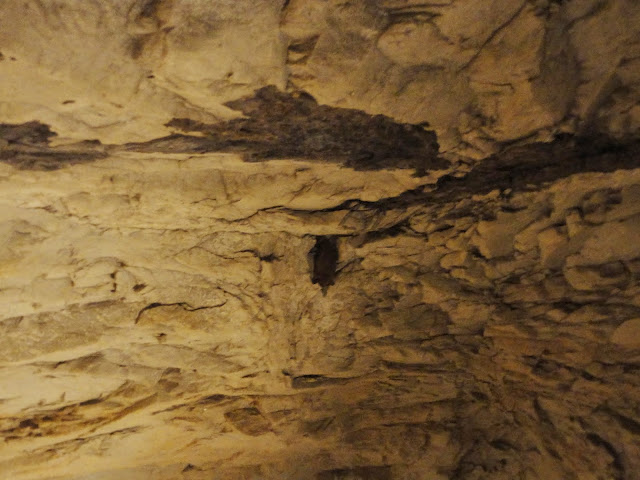 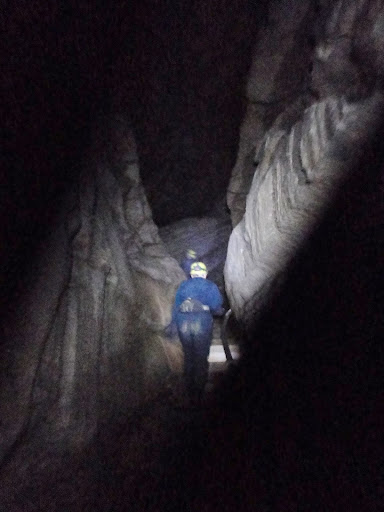