Carlsbad National Park’s unofficial motto seems to be “We aren’t the biggest cave, or the longest cave, but most of our visitors leave saying we are the most beautiful cave they’ve ever seen.”

Carlsbad Caverns National Park is located in southeast New Mexico. For us, it was a 3 hour drive to get there on Wednesday. Ranger led tours start at 8:30am and this time of year (fall) most of the tours are only offered at 8:30am or 1:30pm. Worried that we would miss our chance to take a tour, we jumped in the car and rushed to get there before 1pm. When we arrived only 1 ranger led tour was still available. However, we found that unlike Wind Cave National Park, several areas of Carlsbad Caverns are open for self-guided walking tours and we did not need to accompany a ranger. To get more from the self-guided tour, we did rent the audio tour ($5). 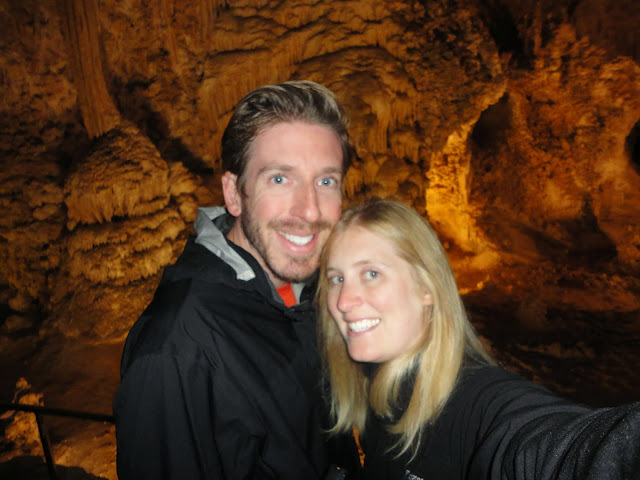 There are two ‘self-guided’ tours; the natural entrance and the big room. The Natural Entrance to the cave is a giant hole in the ground. The first explorers and even the early tourists had to enter using ladders or being lowered down. Nowadays, there is a steep path of switchbacks leading down into the cave. The natural entrance winds visitors down 75 stories. It was a cold November day, and we were excited to get into the cave’s steady 56 degree temperature. Amazingly, we were almost completely alone on the natural entrance walk. The time of year and/or weather must of kept most people away, and we were glad for it. It was almost like exploring a new cave alone and we think a better experience. 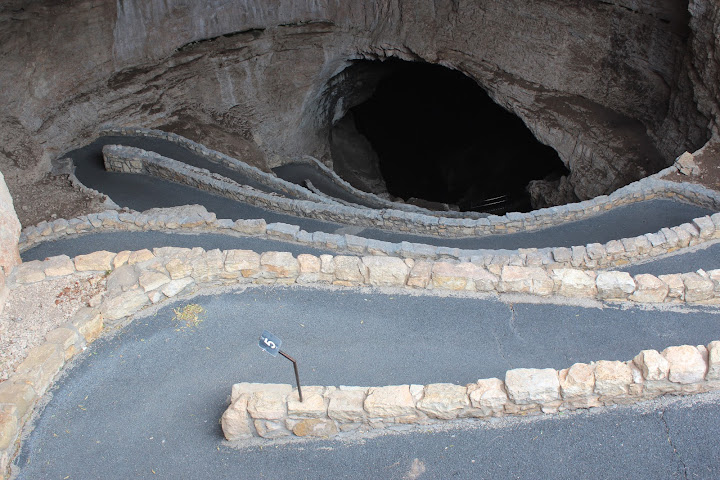 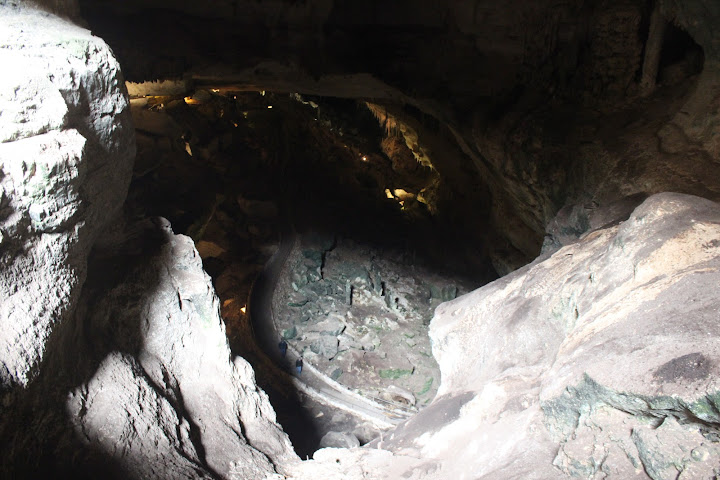 The decent into the cave

Along the natural entrance tour we passed several named rock features. The first is the ‘bat cave’, a large room where the seasonal bat colony usually lives but also has the first stalactites of the walk. Another formation is the ‘whale’s mouth’ whose name is self explanatory once you see the feature. 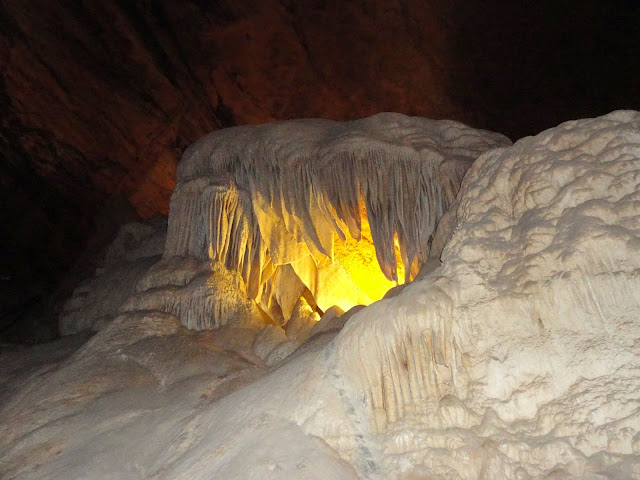 It you opt not to walk in the natural entrance, you can take an elevator down to the start of the Big Room. The big room is a room as long as 4 football fields. The big room tour loops through the entire length of the room. They say that Carlsbad is known for being one of the ‘prettiest’ caves on earth. Although we saw many decorations (stalactites and stalagmites ) during the national entrance tour, the Big Room is where the cave earns its reputation for being beautiful. Some of the more impressive features included the Hall of Giants, Temple of the Sun, Rock of Ages, and Bottomless Pit. 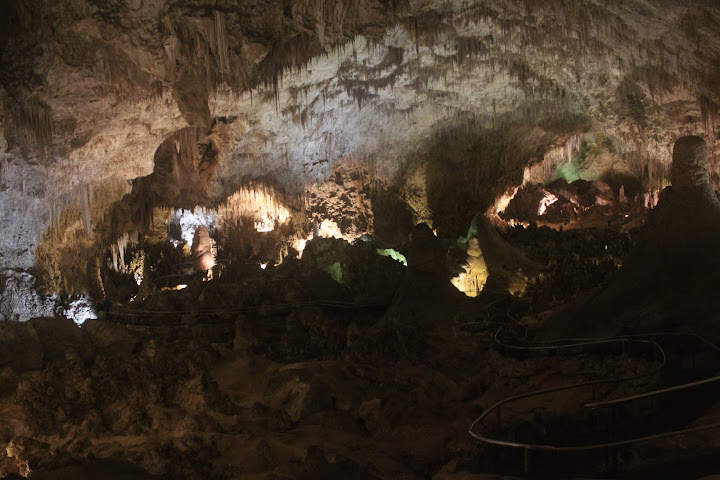 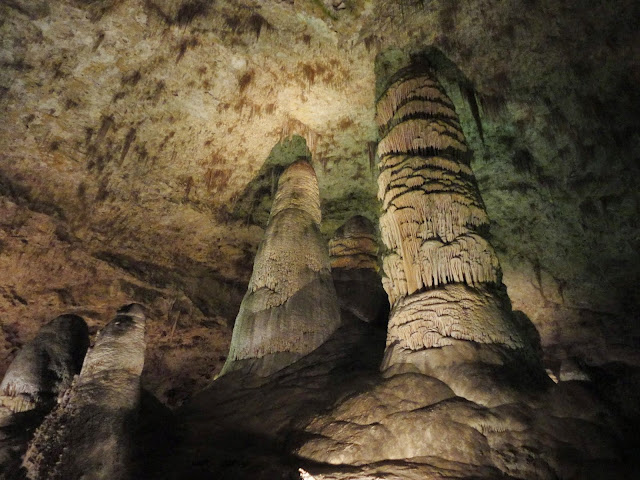 Hall of the Giants 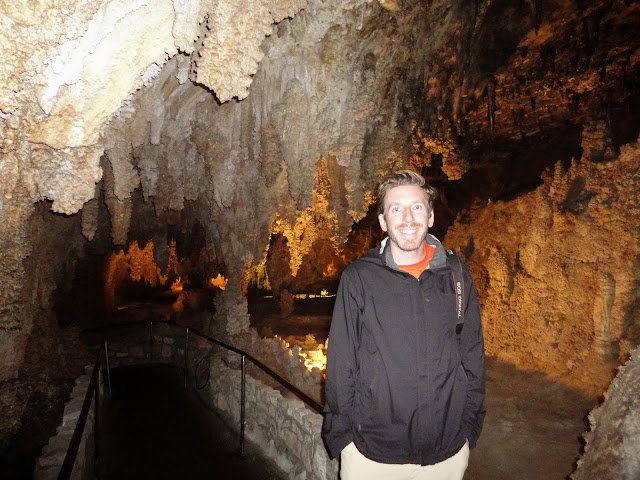 I am glad we had the time to do both tours. However, if you are only able to talk one tour I would recommend the Big Room tour. The audio guide on both tours was very similar. Just about everything we learned on the natural entrance tour was repeated in the big room tour. We spent the night in Fort Stockton, Texas and ate dinner at Mi Casita which was the best reviewed restaurant on both Yelp and Trip Advisor. 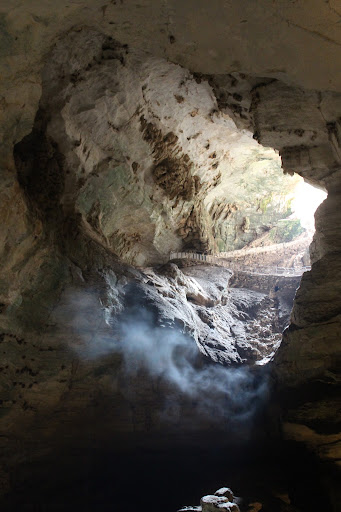 Looking out of the natural entrance 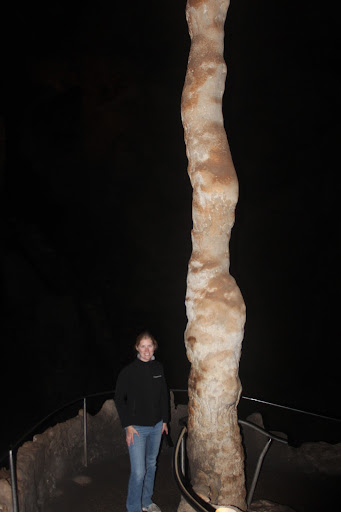 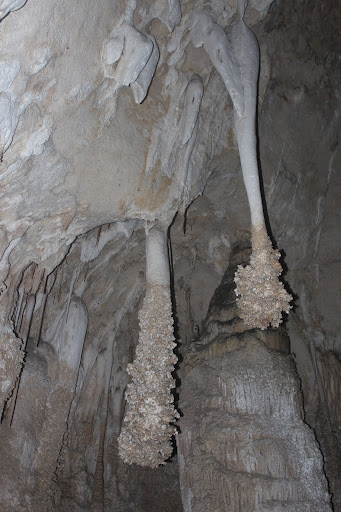 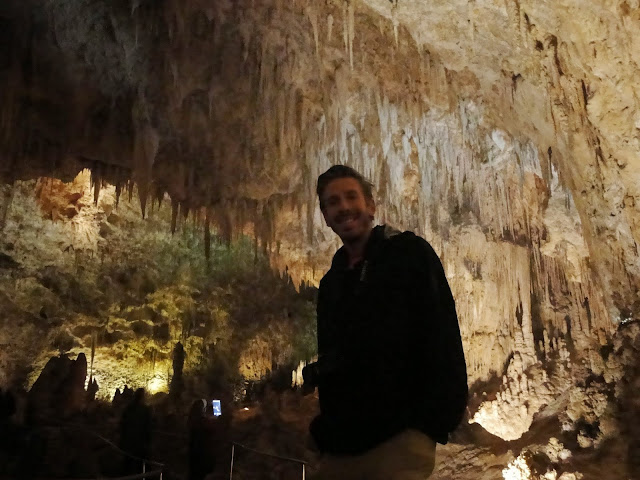 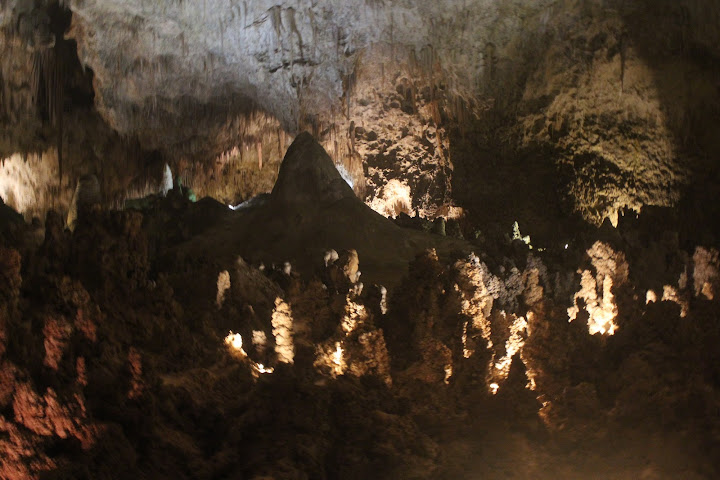 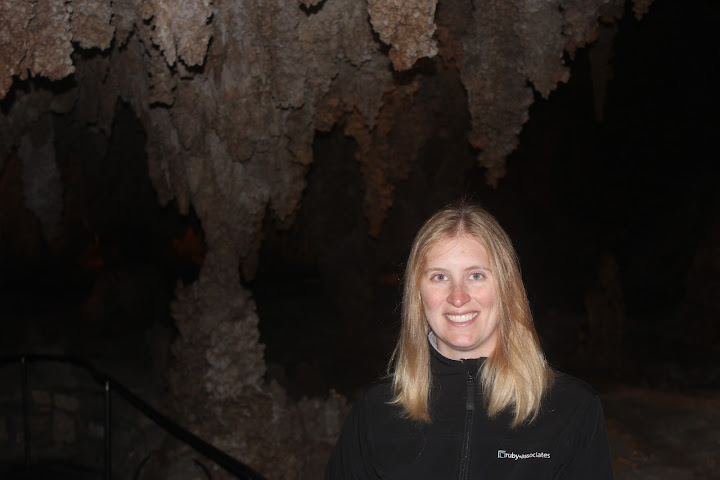 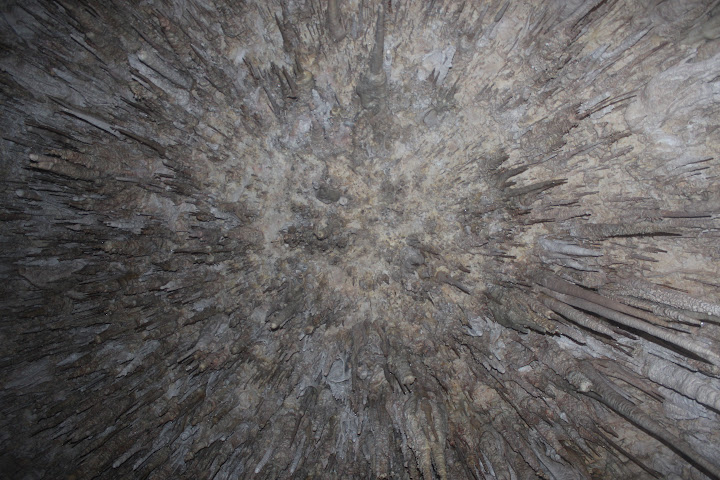 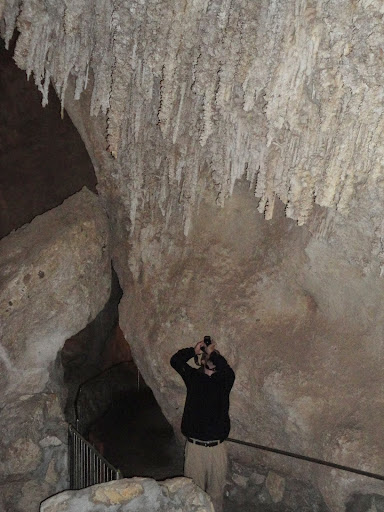 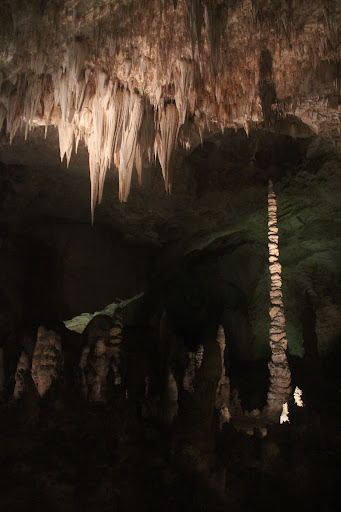 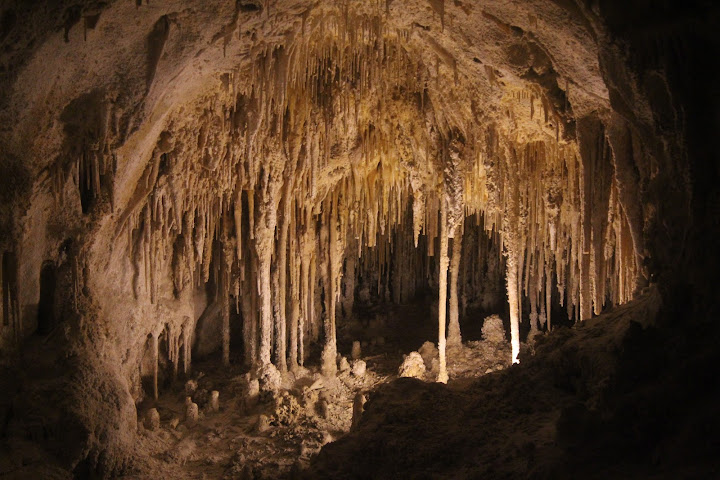 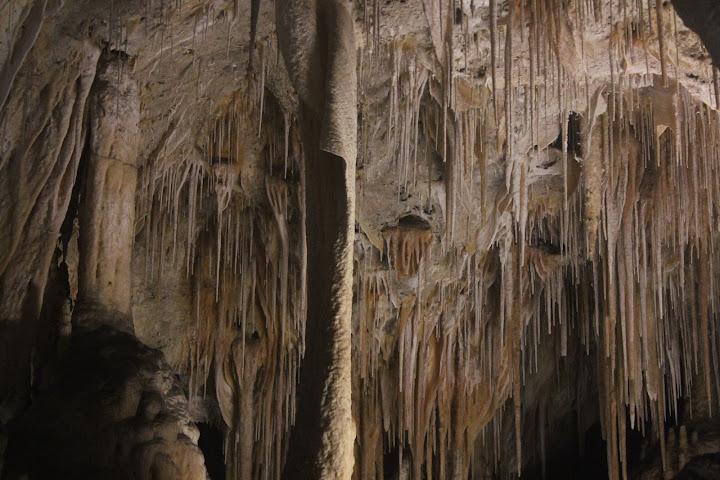 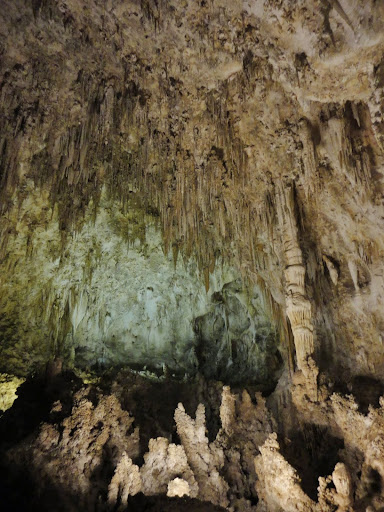