The next two days we explored an artistic city and a blinding national monument in New Mexico.

On Monday, we entered New Mexico and drove straight to Santa Fe. We had been debating about whether to go to Santa Fe or Albuquerque, but a few people at a previous stop had recommended Santa Fe. We didn’t know what to do, so we drove to the Plaza and walked around window shopping. The downtown area of Santa Fe was very nice. It was full of boutiques and gift shops in adobe style buildings and a lovey church stood in the skyline. 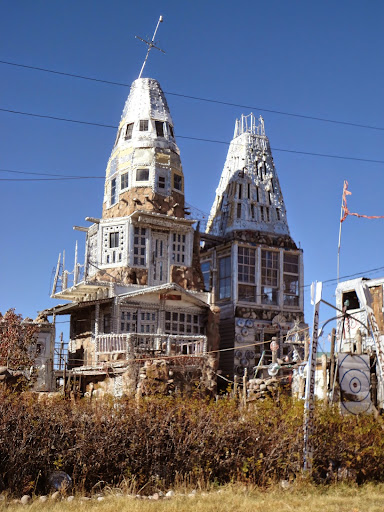 Weird beer can house on the way to Santa Fe, aka Cano’s Castle.

We spent some time looking into options of activities in Santa Fe; The Georgia O’Keeffe Museum, the Folk Art Museum, and the New Mexico History Museum. Eventually we decided to save some money and go visit Canyon Road. Canyon Road is a narrow road lined with art galleries. To keep ourselves entertained for longer, we decided that we each had to choose two art galleries to go in instead of window shopping. We ended up going in 5 or 6 galleries.

For the night we got a room at the Guadalupe Inn, which feels more like a bed and breakfast even through they have 12 rooms. Each room is unique. The staff was very friendly and had tons of recommendations. Even at breakfast the next morning they were recommending more places to the other guests staying longer. The hotel is also in walking distance to the Plaza and a few other streets with restaurants, bars, and shops. 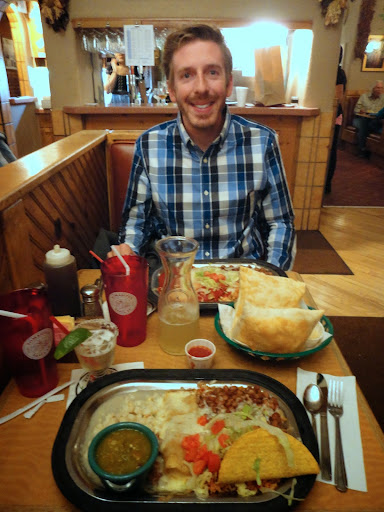 For dinner we ate at Tomasita’s. The best part of the restaurant for me was the history – it is located in an old train station. We had a wait which wasn’t too bad, but once we were seated, our drinks took forever to come out (and water took even longer). When we got sick of waiting we set a 5 minute alarm on our phone before we walked out; the drinks were in sight but not at the table when the alarm went off, so we waited and stayed. The food was okay but nothing we’d need to go back for and the service never got any faster. Before turning in for the night, we checked out the Cowgirl BBQ, known for a craft beer selection.

We arrived at White Sands National Monument at 2:30 and went to the visitor’s center. White Sands is located in the middle of a missile testing range. From the road, White Sands doesn’t look like much; the dunes aren’t very high (especially compared to Great Sand Dunes National Park where we just were) and there is vegetation muting their white color. But, enter the park and drive back to the dunes area and that changes. The dunes remain low but surround you and the vegetation goes away leaving pure white dunes. The wind blows sand across the road and creates beautiful zebra-like strips on the dunes. 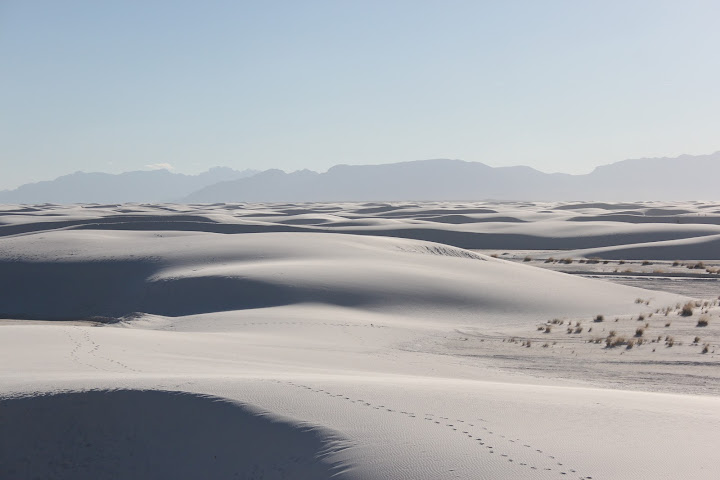 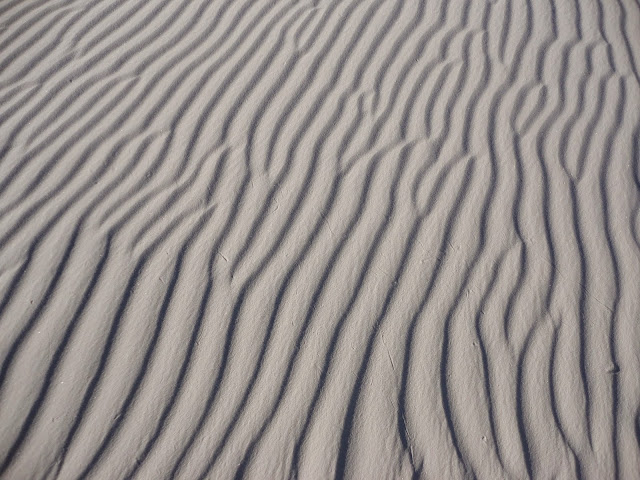 We were there on a chilly day. For me, the oddest thing about the dunes was that they are not snow. The chilly air, white drifts, and ‘plowed roads’ feel even colder because they recall the winter. I had to remind myself this was sand and it wasn’t very cold or wet. I would like to go back on a hot day, and see if the feeling of winter is still in the national monument. 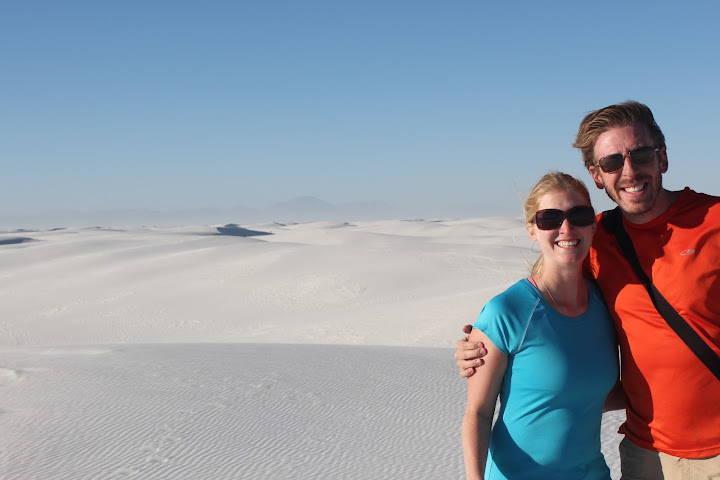 We spent most of our time running up dunes looking for the perfect photo opportunity to get the shadows cast by the dunes in contrast to their whiteness. The dunes are considerably easier to walk on and hike up than those at Great Sand Dunes National Park. 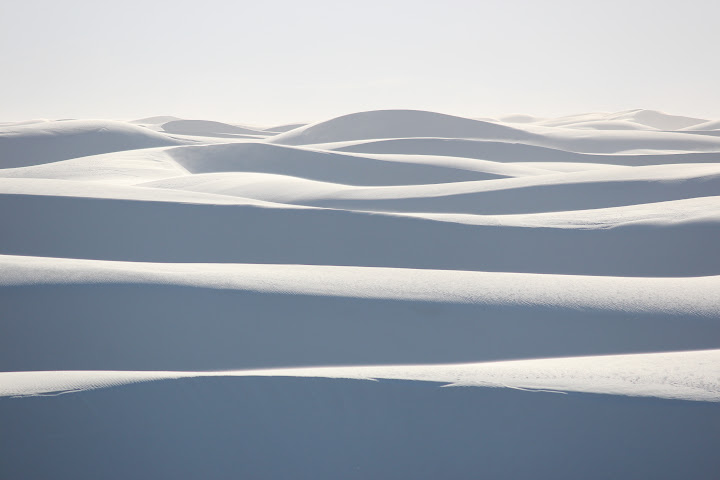 At 4:00 we joined the sunset ranger led talk. The ranger discussed the geology, flora and fauna of the dunes. She also spent time talking about the Indians and how much they were able to obtain from a land which the first settlers thought was useless and barren. At 5:00, as the sun set, the ranger led us upon a dune to watch and ‘honor the sunset’. When the tour ended, Jon and I took one more quick spin through the park looking for photographs we missed and trying to capture the last colors of dusk. 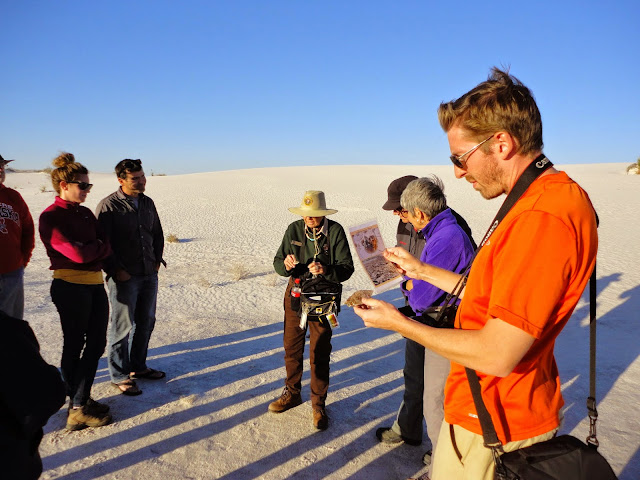 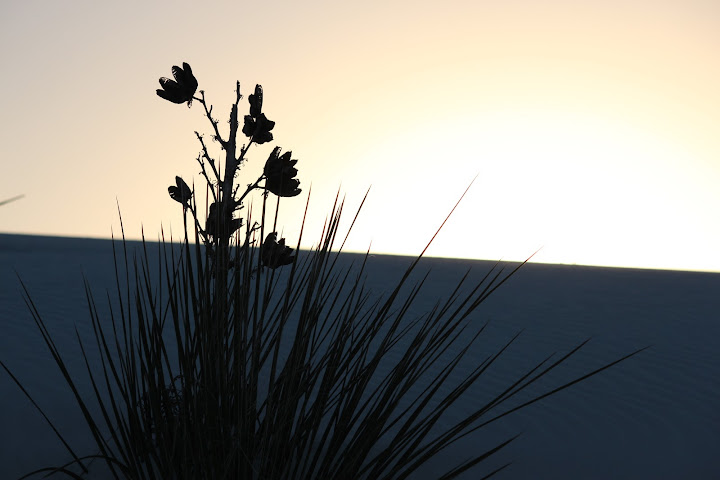 After leaving the monument, we spent the night in Alamogordo where we decided to go to a movie. We saw Interstellar and both enjoyed it. 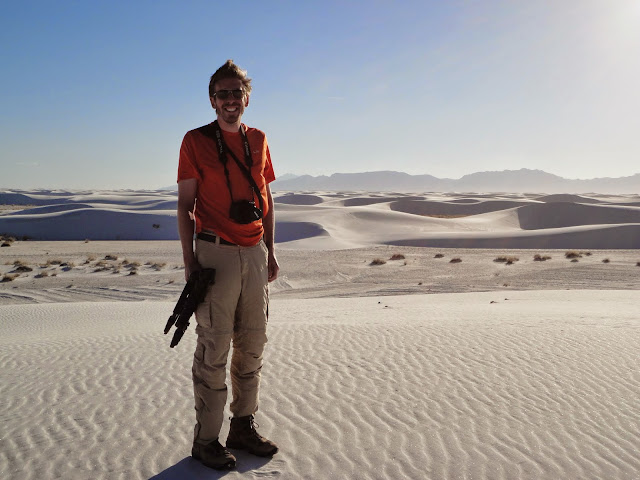 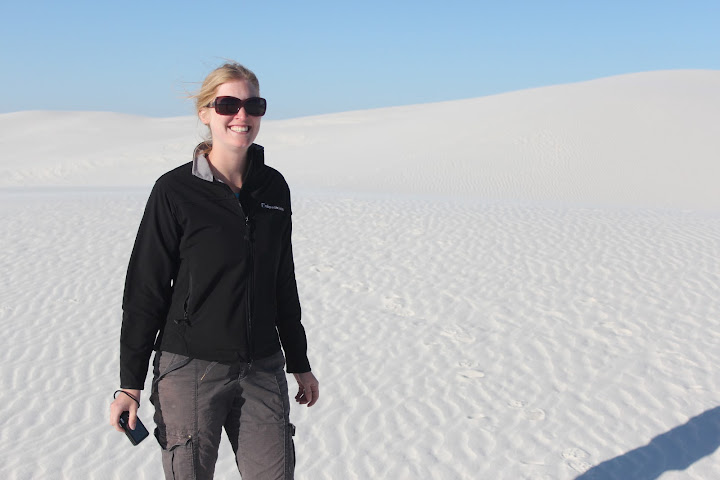 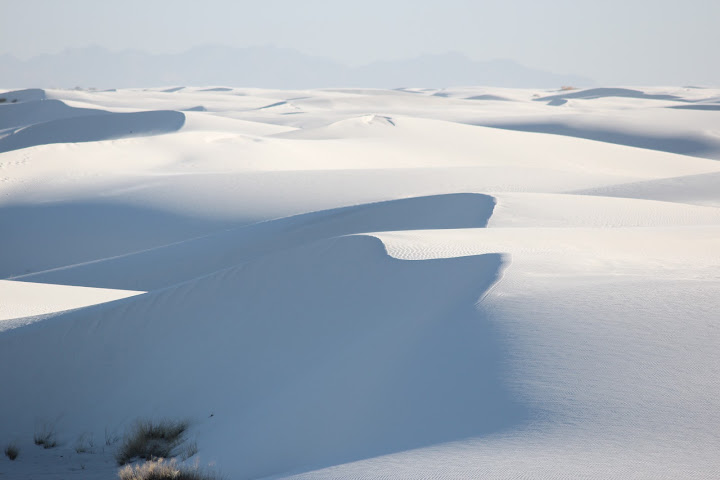 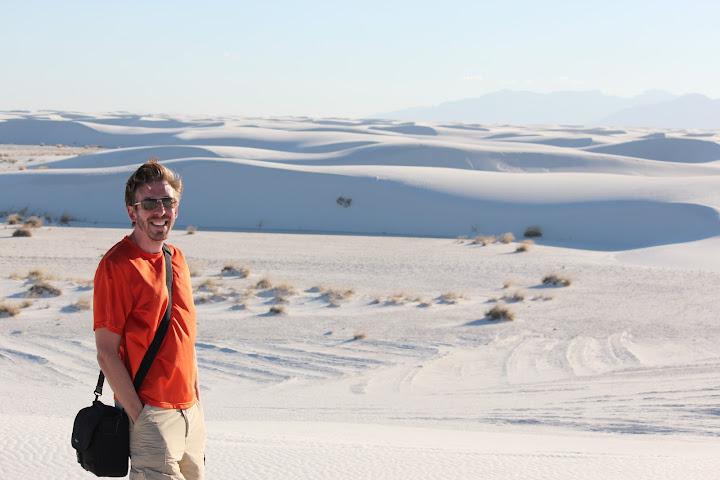 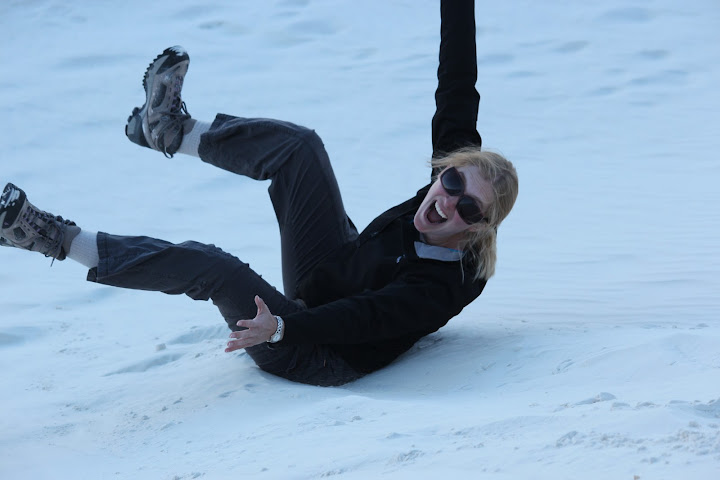 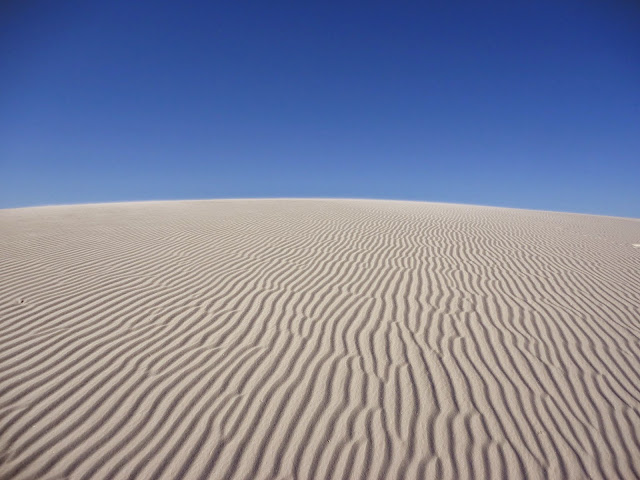 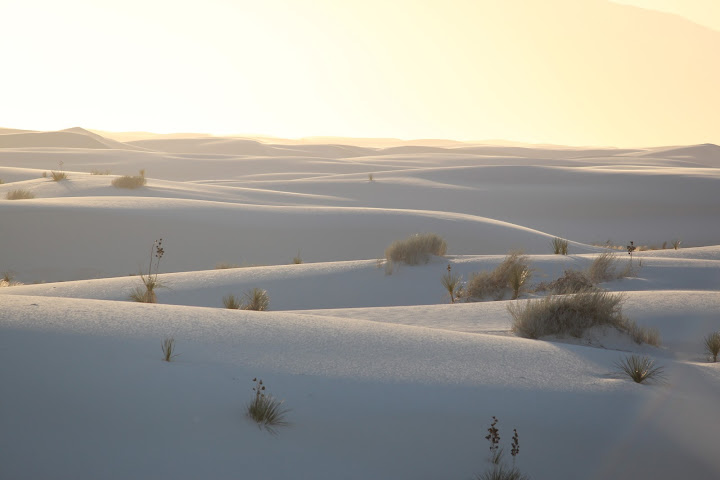 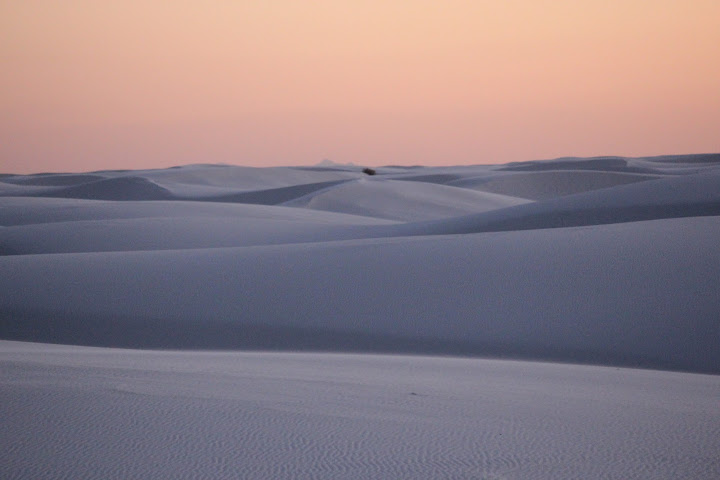 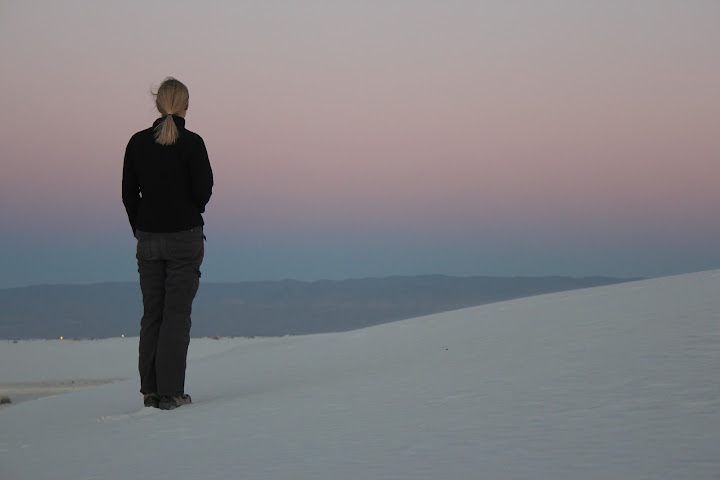 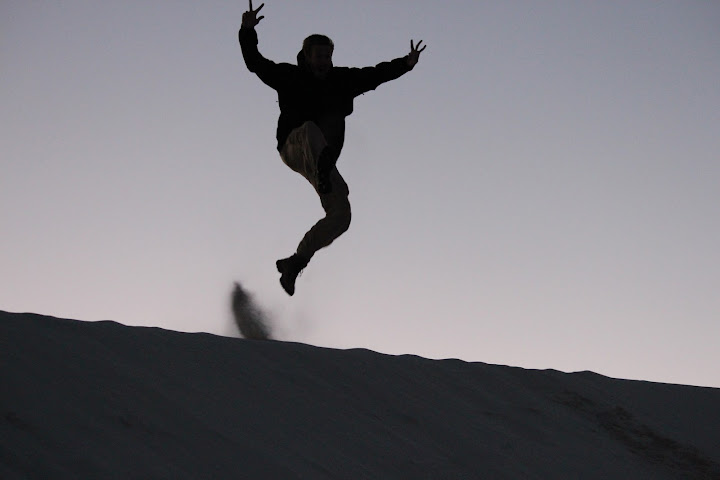