The Channel Islands are a national park off of the coast of CA which we almost missed. The park consists of several islands, but the real gem is the marine life that surrounds the islands. Water sports are a must if you want to see the Channel Islands. 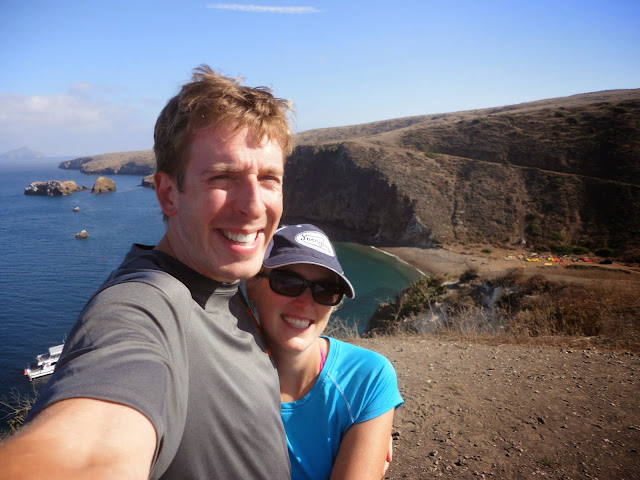 The Channel Islands are composed of 5 islands off of the west coast near Santa Barbara. Of the five islands, two appear to be easy to visit without much advance planning; Anacapa and Santa Cruz. Two private boating companies have permission from The National Park Service to shuttle passengers and their gear to the islands. Multiple guide companies, either working in conjunction with the ferries or reliant on the ferries, run kayaking, whale watching, and hiking tours. 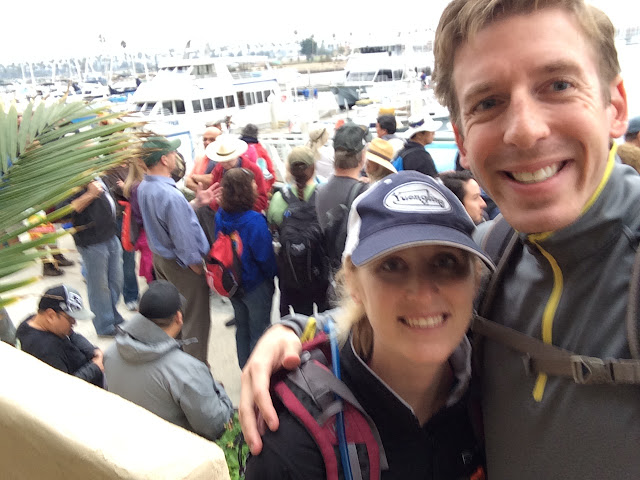 An early morning at the Ferry dock

Our day started at 6am when we had to leave the hotel in time to catch an Island Packers ferry from Ventura, CA to the islands. Our tour was on Santa Cruz Island and the ferry ride was about an hour long. The ferry captain was a bit droll but was a good guide on the ride. He stopped to circle a buoy that sea lions were resting on. When we entered into the park, he was talking about the sea life and how we should start looking for it more diligently.  Just then, ‘right on cue’ in his words he pointed out tons of dolphins swimming out to the boat. It was a lot of fun to watch. 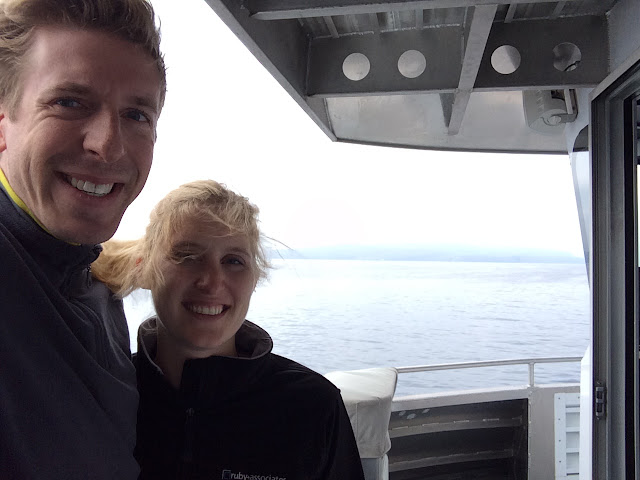 On the Ferry (Santa Cruz Island in distance) 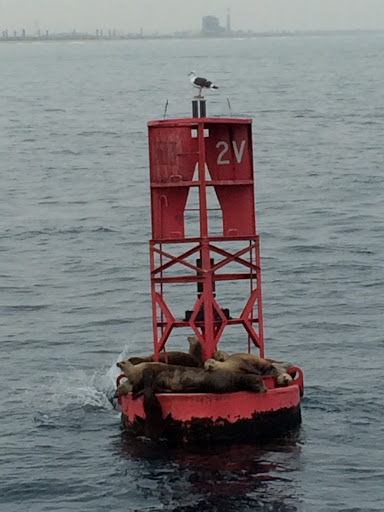 Buoy of sea lions with a seagull on top

When we got to shore we met our guides and got geared up with kayaks, paddles, and wetsuits. 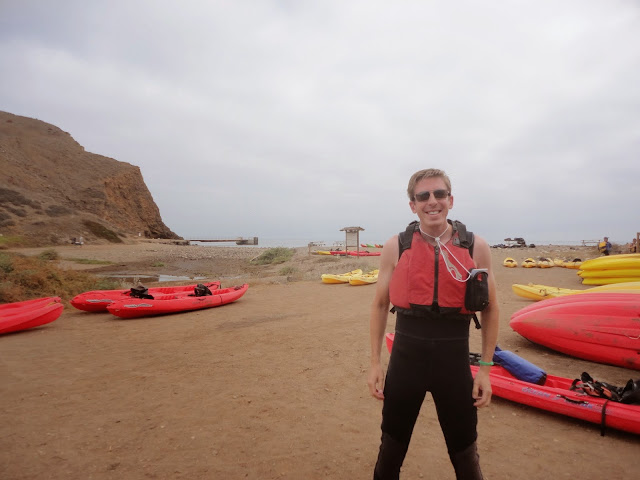 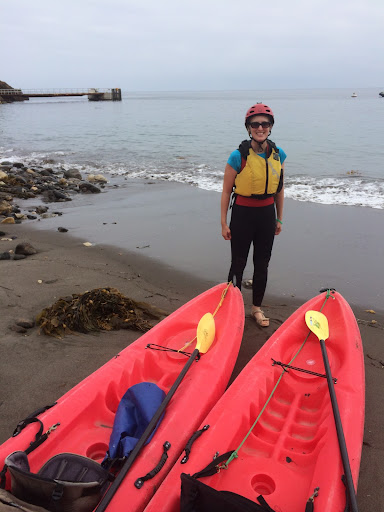 The kayaking tour was very cool and included weaving in and out of sea caves. Our guides would go into the sea caves and watch the water swell. When the timing was right, they’d have us paddle in. The mouths of several of the caves were a tight fit and you had to lay down in the kayak to get in. At a few caves the guide gave some warnings about the dangers of the day’s big swells, as the water could rise while in a short sea cave. Jon and I were the only two people who actually decided to enter them, and did so mostly without issues. While kayaking we went past a few harbor seals and one swam right under Jon’s boat, nudging it with his nose. I also saw an octopus when the waves receded reveling a rock normally underwater. The area around the islands is mostly a kelp forest. The water is very clear because the bottom is rocky rather than sandy. 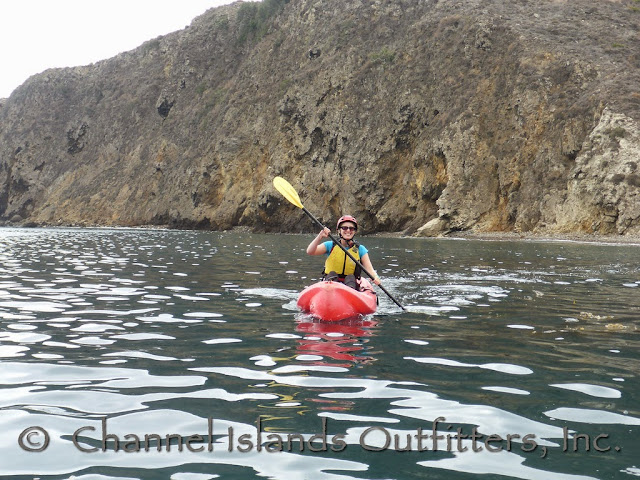 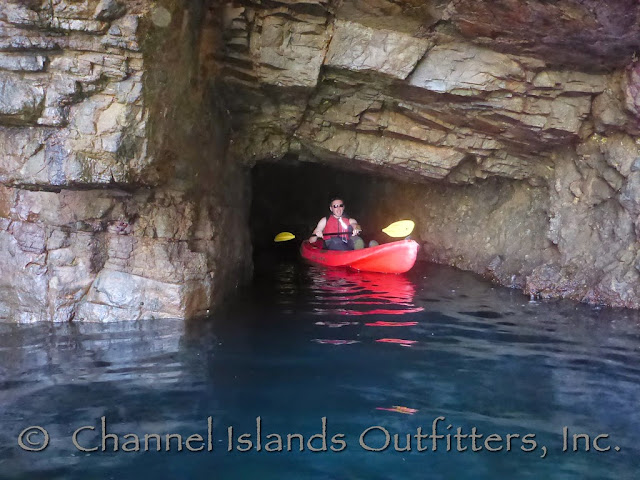 After a few hours of kayaking we came on shore. We had until the 4pm ferry to eat packed lunches, hike, or snorkel. After eating sandwiches we decided to snorkel. The guide lent us flippers, goggles, and snorkels and we wore the wetsuits from kayaking. The surf was rough and the hardest part about snorkeling was getting past the waves to water deep enough to swim in. Once we were out in the kelp forest the snorkeling was a lot of fun. I saw a kelp forest tank at the Monterey aquarium and really felt an appreciation for what I was seeing now in the wild. The fish were a bit sparse for a while, then all at once a school of thousands of blue fish were around. I also saw a bat-ray which scared me. When the water temperature got to us (it was just under 70 degrees), we went ashore and did a quick hike to the top of a hill to take some photos. 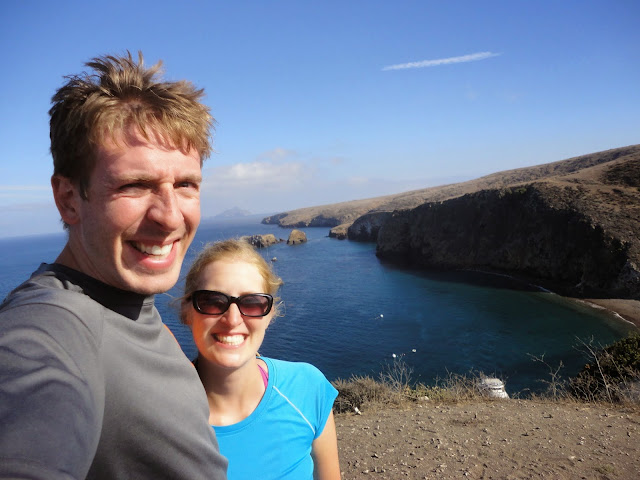 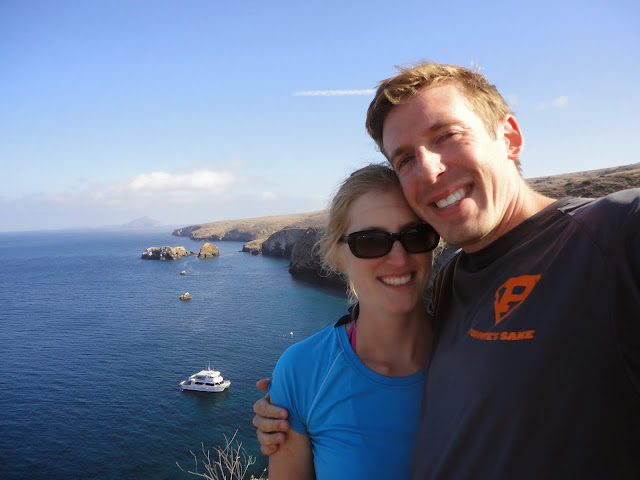 On the ferry ride back we again went past hundreds of dolphins. After watching the dolphins for a while, we took off and they followed riding the waves in the wake of the boat. It was a perfect goodbye to the islands.  From Ventura we drove to Los Angeles to meet my friends for dinner. 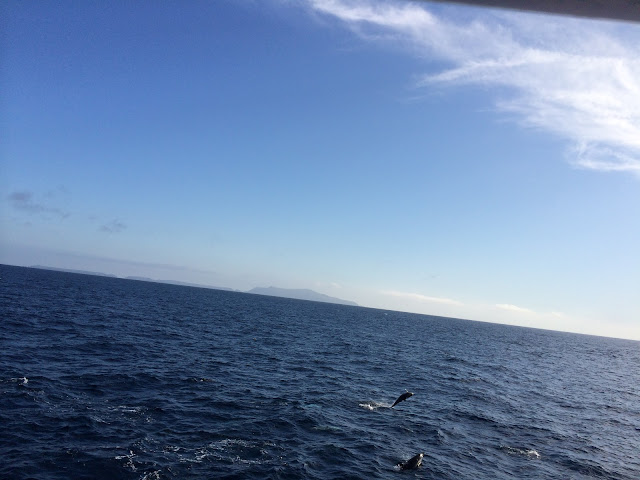 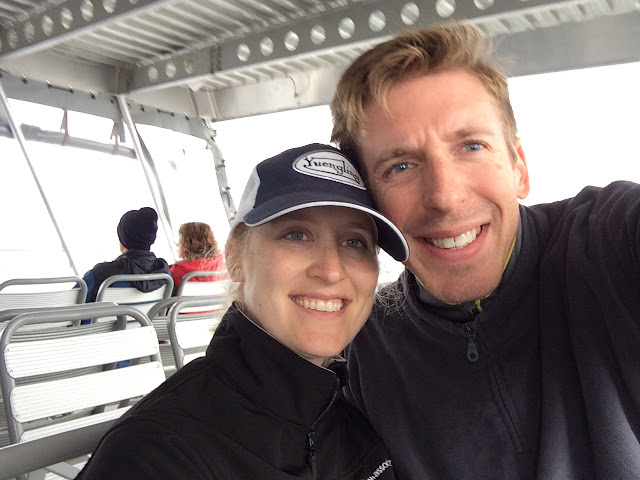 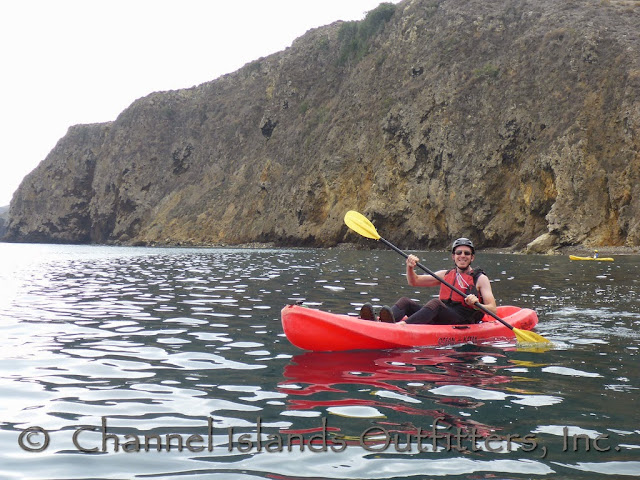 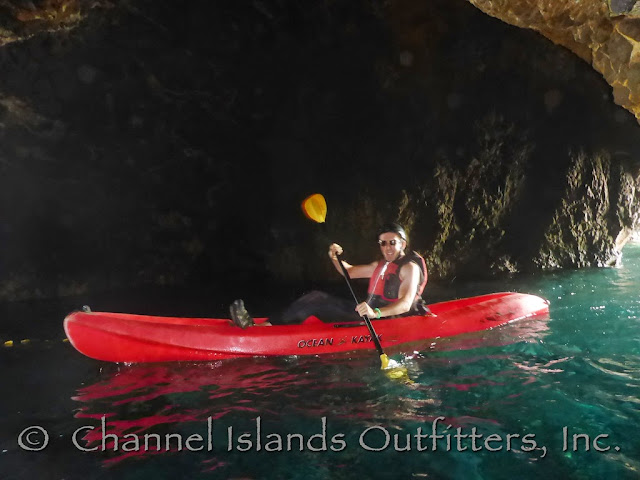 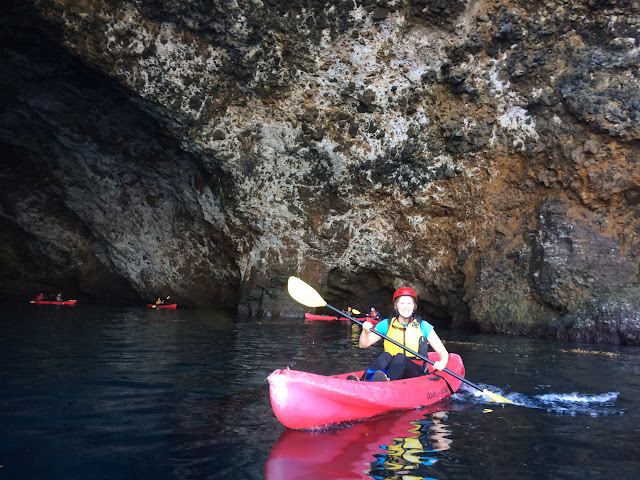 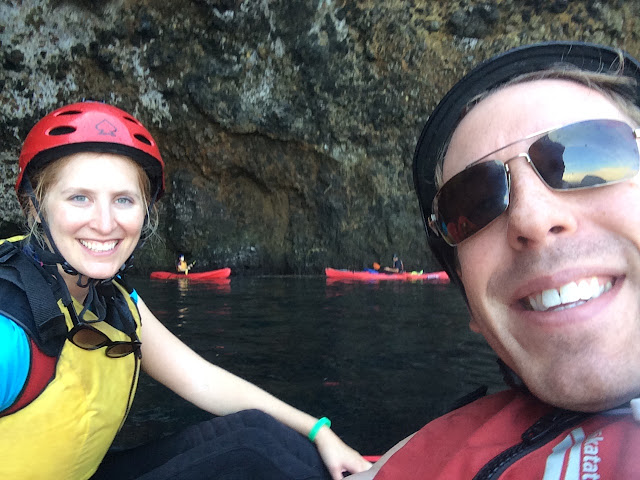 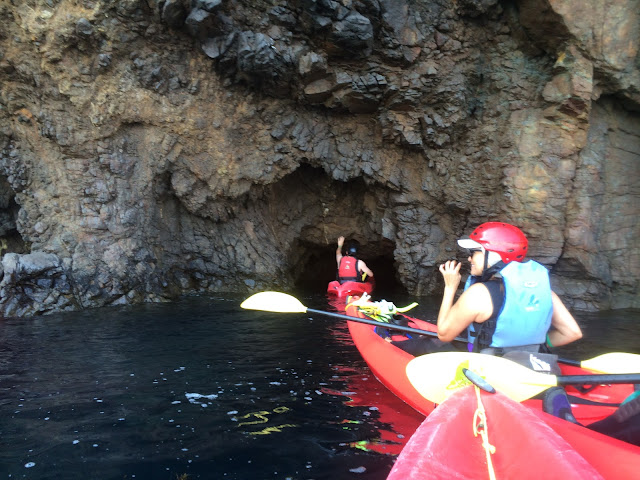 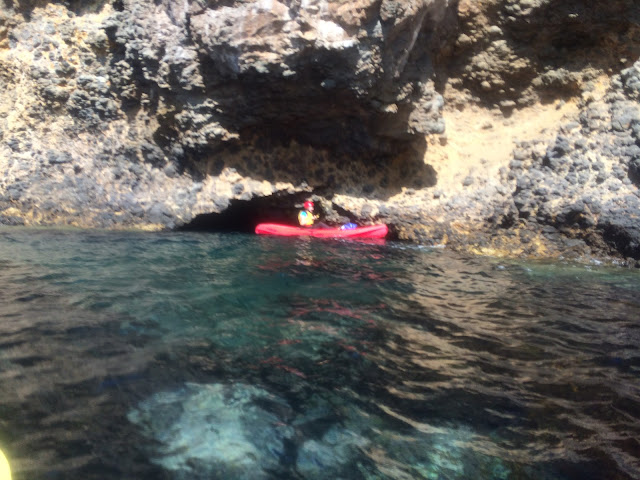 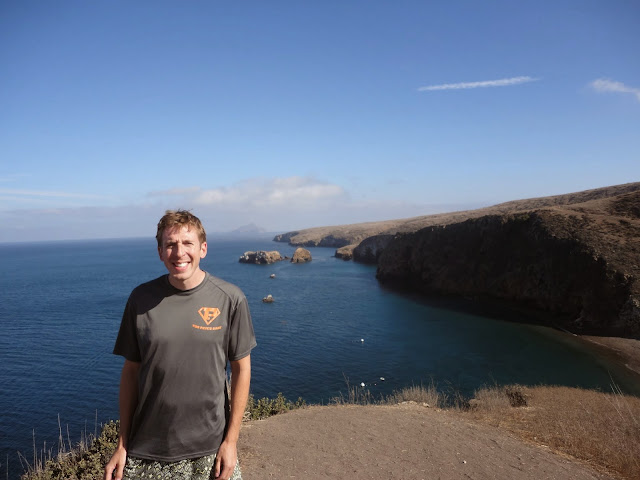 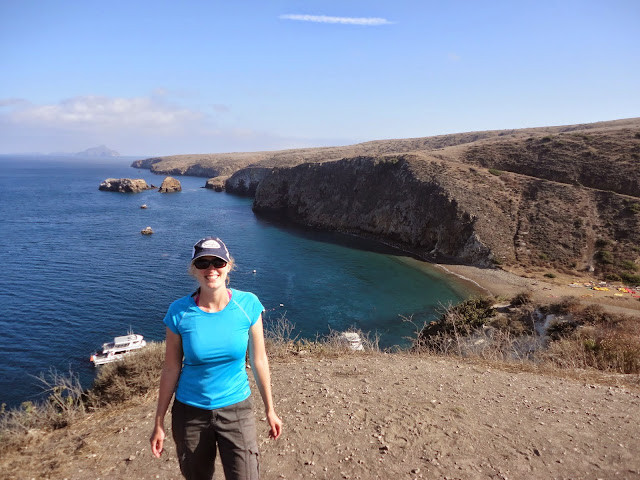