For us Santa Barbara was all about strolling State Street and eating. We spent some time on the beach too.

Our destination for the night was Santa Barbara. We started out driving down State Street and really liked the area with all the bars and shops lined with palm trees. We ended up driving very far up State Street before we found a hotel with vacancies. After securing a hotel we drove to Los Agaves for dinner. Los Agaves was slightly off the beaten path, but was a great find. We had very unique and likely authentic Mexican food. Before going back to the hotel we walked around State Street for a while checking out the town. 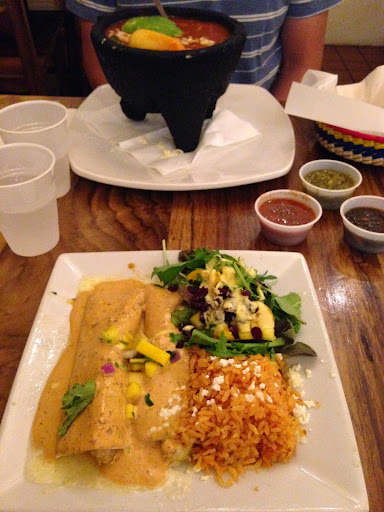 On Thursday, we changed hotels in the morning (because we had to find another with vacancy) and then had a whole day to enjoy Santa Barbara without being on the road. We started by walking to the beach. I took off my shoes, took two steps onto the beach, and stepped on a bee. I didn’t know it was a bee when I reached down and felt something stuck under my foot, I pulled it out to find myself holding a live bee. I needed Jon to look at my foot and pull out the rest of the stinger. Even though it was overcast, it was warm and muggy so we laid on the beach and tried to get rid of our farmer’s tans from hiking. After a while we cleaned up at the hotel and walked around town. We decided to stop at a few happy hours starting with the Santa Barbara Brewing Co. The Santa Barbara Brewing Company seemed like a cool little brewery and from the bar we could see the brewing equipment. We had a nice beer and some really great pulled pork nachos. We asked the bartender for other happy hour suggestions and he directed us to The Enterprise Fish Company. We got a table at the bar at the Enterprise Fish Company and they brought bread to the table. We also ordered Cajun popcorn shrimp and steamed clams. It was more than enough food to ruin our dinner. Before going back to the hotel we decided to hit up one more happy hour and went to the crowded Sandbar we had noticed the night before. Sandbar must be popular for their outdoor seating because we weren’t very impressed with their service. Two servers couldn’t answer our questions about the happy hour wines and once we ordered only the very busy bartender was able to actually pour us our drinks. Also, the happy hour special was ‘buy a drink, get one for 25 cents’ but they require the second drink be the same as the first.

The next morning we had big plans, so we decided not to get more drinks and since we were too full for dinner we returned to the hotel. At the hotel we spent some time in the hot tub before bed.