Los Angeles was the city to date that we’ve spent the most time in. Our hosts were amazing, but when you are in a city as big as LA its hard to see and do everything. 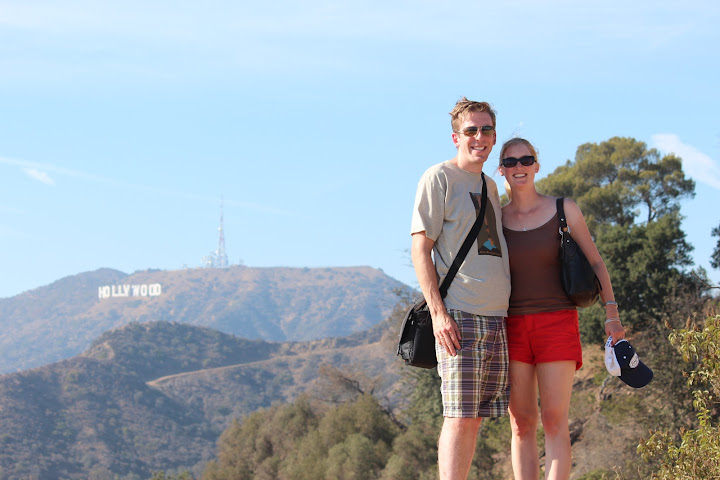 After a long day exploring the Channel Islands, we drove to LA to meet my high school friend Erin. We arrived around 7:30 just as Erin and her husband Adam were getting off work. While Jon and I took desperately needed showers, Erin ordered pizza for dinner.

When we had eaten, we got ready quickly and went to Culver City to join a birthday celebration for Erin’s friend. Culver City seemed like a cool little town with a lot of night life. We went to a bar called Seventy 7, where Erin’s friends had reserved a table. After a few drinks and some nice conversations we decided the bar was a bit too loud for us so we returned home where we played Cards Against Humanity. 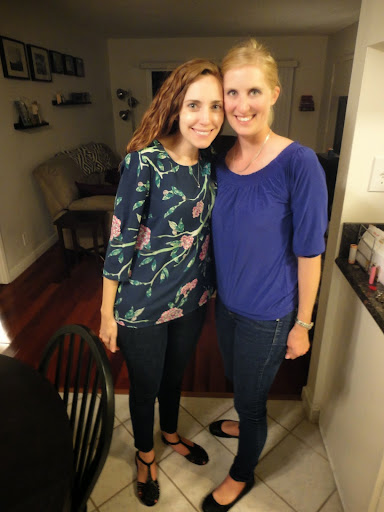 The next morning was Saturday which meant that Erin didn’t have to work. I was interested in seeing the Griffith Observatory which worked out well because Erin had been wanting to check it out too. I didn’t realize when I suggested it that the observatory was part of a much larger park. The park was filled with people enjoying the nice weekend day. We parked at the bottom of the park and hiked uphill to the observatory. The outside of the observatory was full of educational details we weren’t expecting; such as marks in the concrete indicating the distance between orbits, sunset and moonset radial lines, and the Gottlieb Transit Corridor. Not to mention the observatory has amazing views of both LA and of the Hollywood sign. 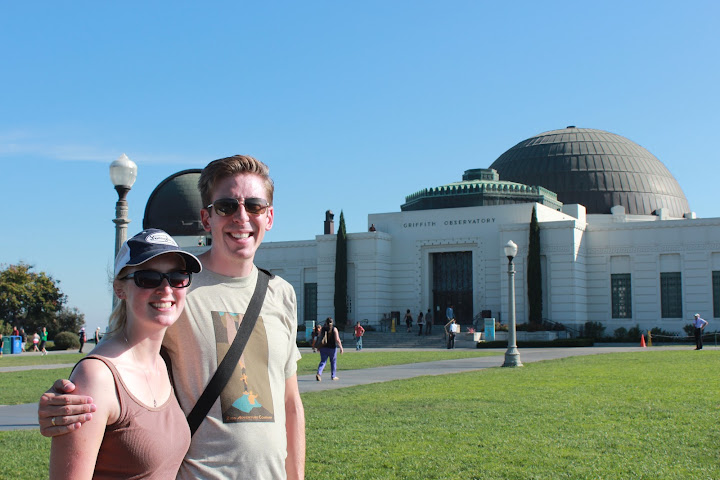 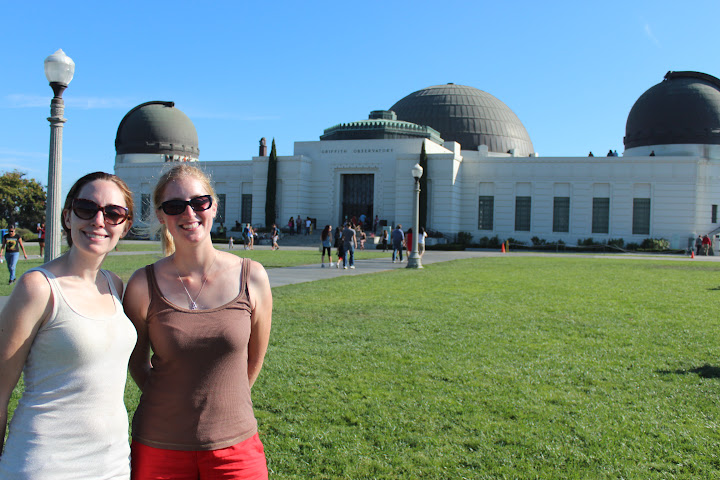 Because none of us had seen a planetarium show in years, we decided to buy tickets to the next show. The show we saw was entitled “In time” and was about apocalyptic theories (such as the Mayan calendar) and why they are unsubstantiated. The show didn’t seem very focused and discussed how the Mayan calendar was created, the passage of time, the second law of thermodynamics, and even touched a bit on the space time continual. The show was narrated live by a planetarium employee. Also, a majority of the show was created by digitally projected images instead of stars from a traditional planetarium projector. The few parts early in the show when the traditional projector was used were much better than the slide-type projections later on and I wish we had seen more of that.

When the show ended we took some time to look at the other exhibits in the Observatory. Our favorite was a set of scales which shows you what your weight would be on each of the planets and Pluto. The walk back to the car was very nice as the day started cooling off. 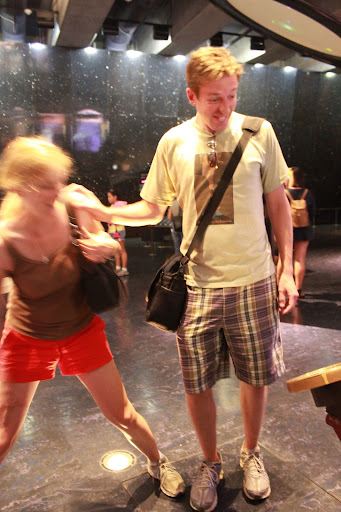 For dinner we went to Erin and Adam’s favorite sushi restaurant, Hara Sushi. Jon and I had a really great meal there trying several sushi dishes that we weren’t familiar with; like the baked scallop roll (a warm California roll smothered in a creamy sauce of onions and scallops) and the hell’s roll with jalapeño and spicy sauce. Instead of going to a bar afterwards we drove to Westwood for ice cream cookie sandwiches from Diddy Riese. We were shocked at the length of the line for ice cream so we walked around Westwood a bit. Westwood is located adjacent to the UCLA campus and has a cool college town feel about the nightlife. When we checked back at Diddy Riese and saw that the line hadn’t lessened, we went to Trader Joe’s and bought some ice cream to eat at home instead.

Sunday was another beautiful day and both Erin and Adam were able to join us. Adam started the morning out by making excellent breakfast burritos at home. We all headed to Santa Monica for a bit of window shopping and to walk to the end of the pier. The beach at Santa Monica had a surprisingly large crowd for October – the most Jon and I have seen at a beach all trip. We walked down to the end of the pier watching the carnival rides and eating ice cream. 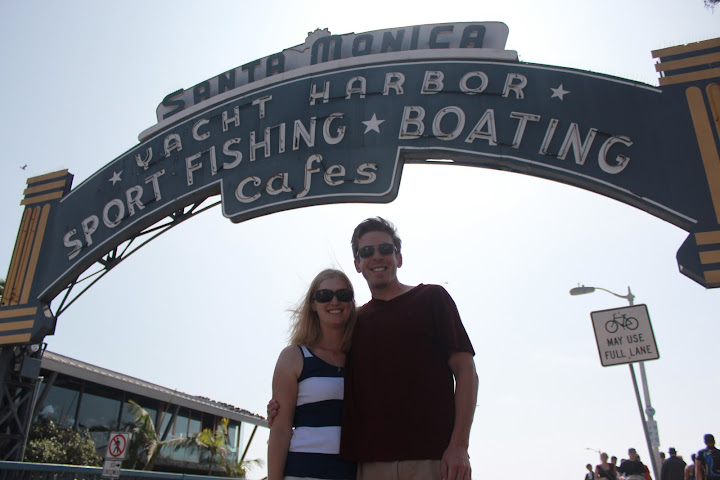 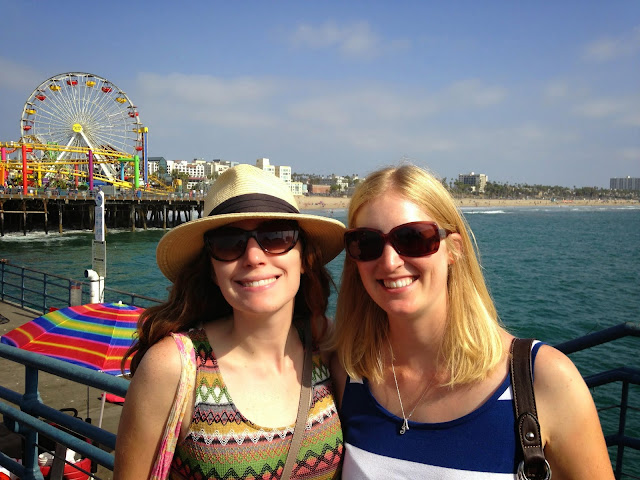 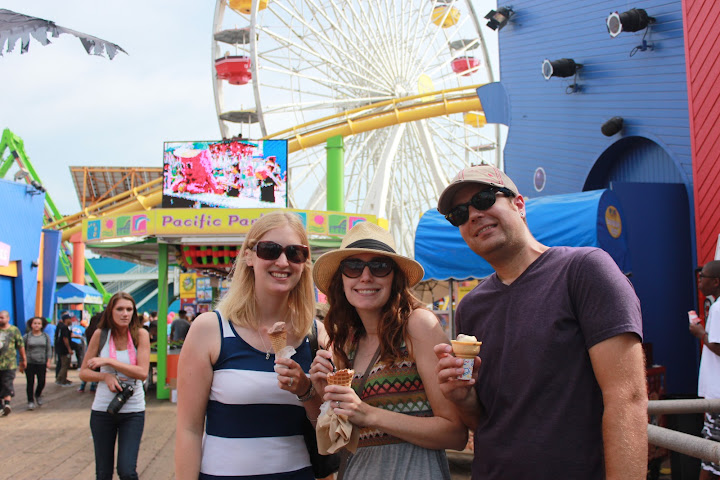 Our next stop was to Venice, CA. After parking we walked to the beach and splashed around in the ocean a little. The pedestrian walkway along Venice Beach and up to Muscle Beach felt like the east coast with t-shirt and souvenir shops, but with added medical marijuana evaluation offices (we hear its pretty easy).

We walked back from the beach through the Venice canals. Neither Jon nor I realized that Venice , CA had canals to mimic its namesake in Italy. The canals are shallow but beautifully maintained as are the gorgeous houses lining them. Dinner was right next to the canals at Baja Cantina, Erin and Adam’s favorite Mexican place. We liked the restaurant which was surprisingly big with lots of outdoor seating areas. 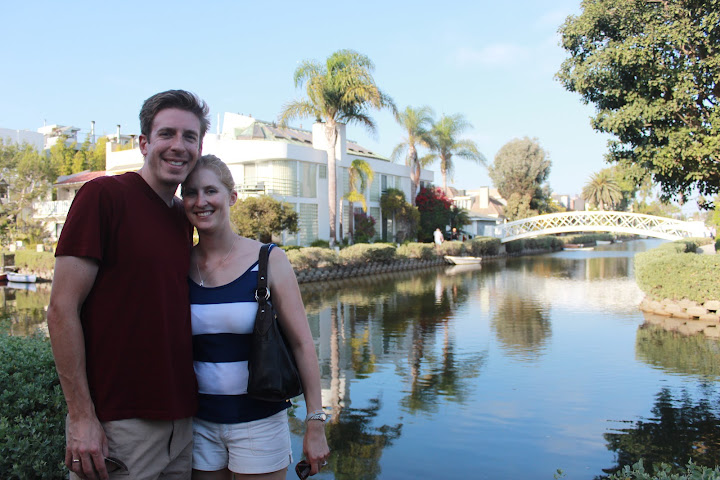 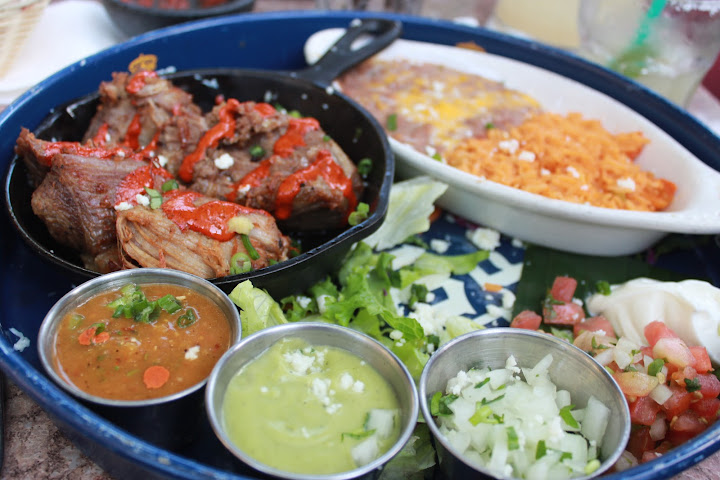 Our last activity of the day was to watch the movie Gone Girl at the Landmark theater. Erin, Jon, and myself had read Gone Girl and enjoyed how closely the movie was able to follow the book.

Monday was the laziest day Jon and I have had all trip. We stayed inside, Jon worked and I updated the blog.  We did laundry and only left to go to the grocery store. (We also caught up on some TV series we were falling behind on). To thank our friends for letting us stay, we cooked dinner. At one of my former jobs we had an employee cookbook with a recipe for gorgonzola shiitake pasta. Not being able to recall the exact recipe, we found this one online and made it (using regular fettuccine). The results were very similar. To compliment the pasta we also made salad with our favorite sweet onion dressing. We like to use the dressing found here, but on a salad of baby spinach, strawberries, and walnuts.

Tuesday we went to Hollywood to be part of the Jimmy Kimmel Live studio audience. Our experience actually started several days earlier when we had to sign up for 1itoa.com and apply for tickets. We received general admission tickets by email a few days later. Before the show we walked around Hollywood’s Walk of Fame and Grauman’s Chinese Theater. We got lunch at Pink Pepper, a Thai restaurant and one of Erin’s favorite lunch restaurants in the area. The Pink Pepper staff seemed a bit overwhelmed by their lunch time crowd, but both Jon and I really enjoyed our meals. 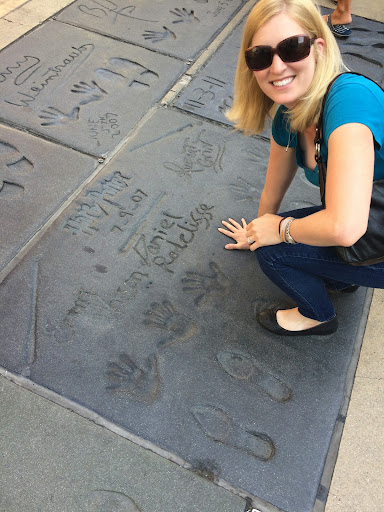 After lunch we walked to the theater where the Kimmel show is taped. It was still very early before check-in, but a line had already formed so we decided to get in it. The show had two lines, Priority and General. I was completely amazed at the number of priority ticket holders. I’m not sure how to get priority tickets but they must hand out tons and tons of those. Seeing the priority line was a bit daunting because we knew they got to enter first. Also, even though we waited for hours, priority ticket holders could get into line in front of us up until 3pm (and a few were let in after that although the people in front of us jokingly commented on it to the staff). 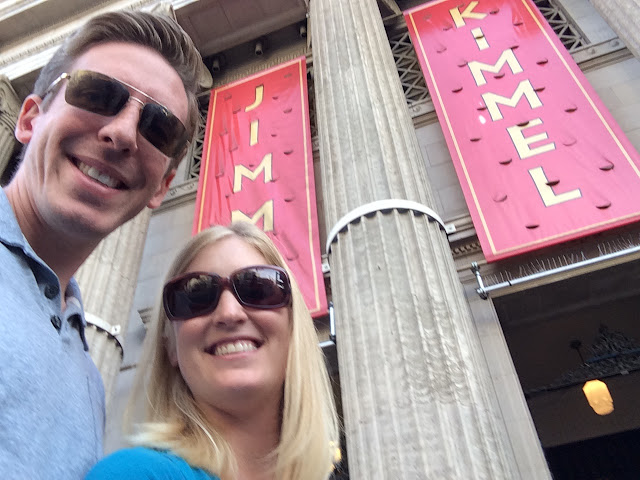 In line for Jimmy Kimmel Live

We finally made it into the theater and stood in lines watching old Kimmel clips while they allowed for a bathroom break. Then the lines started to move towards the theater. At the door a man would designate seats for you based on your party size. Once seated we waited another 30 minutes watching clips of the show. Half an hour before taping an 1iota representative talked about the expectations of the audience to clap and cheer. With 15 minutes to go the ‘warm up’ act came out. I expected this to be stand-up comedy to get you in a laughing mood, but really it was just another guy whose energy was focused on telling us to laugh more rather than making actual jokes. At 3pm, the show started and it flew by. Jimmy came out, did the opening monologue and first gag. The gag that day was creating the title for a buzzfeed.com list by pulling words from a bingo spinner. During the taping several more titles were created than actually aired. At the first commercial break Jimmy chatted with one audience member while the crew quickly assembled his desk. The show filmed promos and his interviews with two guest stars, Adam Carolla and Cristela Alonzo. While I noticed a few minor edits to the final show on TV, they never did retakes or filmed an excess of material. Basically the filming flew by and everyone in the crew moved quickly for the whole hour. When the show was done we were escorted outside to watch a concert! We knew that concert tickets were available when we signed up for our audience tickets, but we didn’t know the audience tickets included the concert so that was a nice surprise. The concert was Bob Seger. When Jimmy announced the musical guest we were surprisingly close to him which was probably one of the biggest highlights of the taping (although we still didn’t make it on TV). 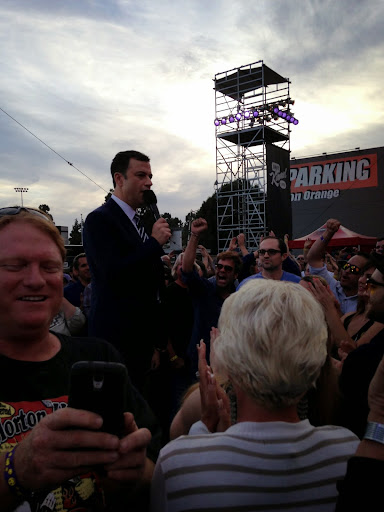 We were close to Jimmy

We aren’t very familiar with Bob Seger except for knowing his name, but the concert was really fun and we did end up recognizing a couple songs. The best part was that Bob Seger seemed genuinely excited and happy to be on stage performing for us. He ended the show with Old Time Rock’n’Roll which really got the crowd hyped-up. 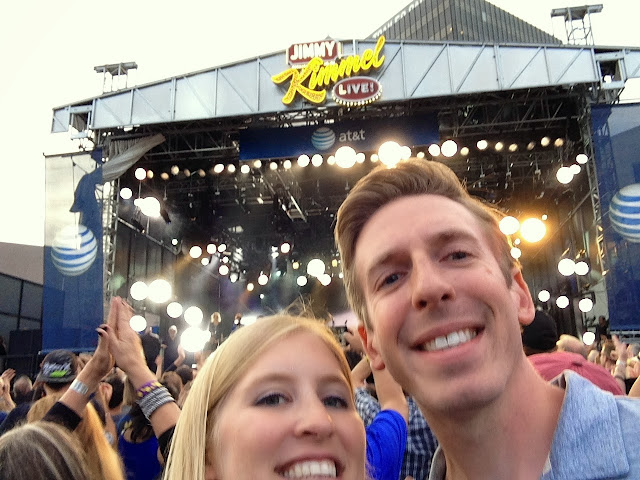 On our way back to Erin’s we decided to drive through Beverly Hills even though we didn’t have anywhere in particular to see. For dinner Erin took us to the Alibi Room, a speakeasy type bar that serves Korean BBQ form a food-truck kitchen. The food was excellent. That night we stayed up to watch Kimmel but didn’t see ourselves on it. Hiking to the Griffith Observatory 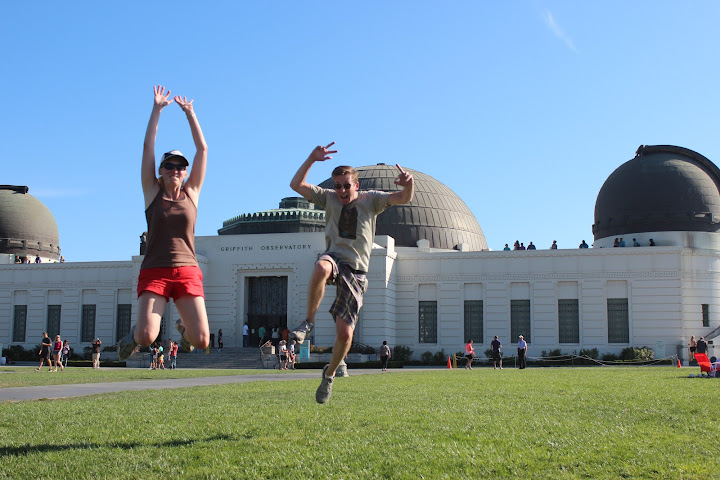 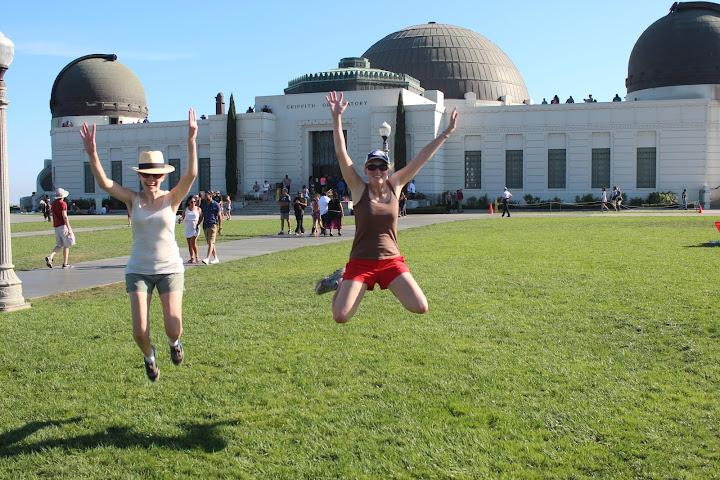 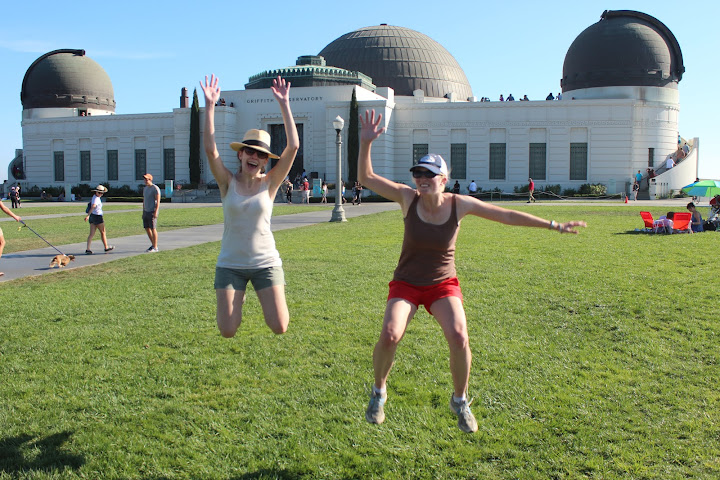 Even though my jump is less than impressive, this one is so cute of Erin that I had to post it. 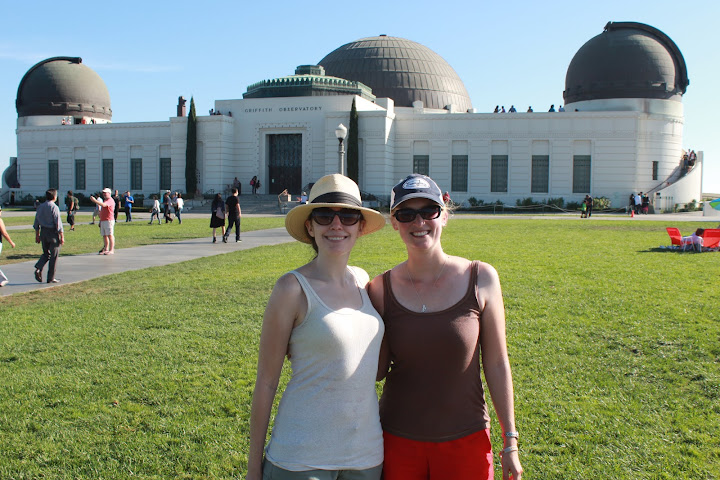 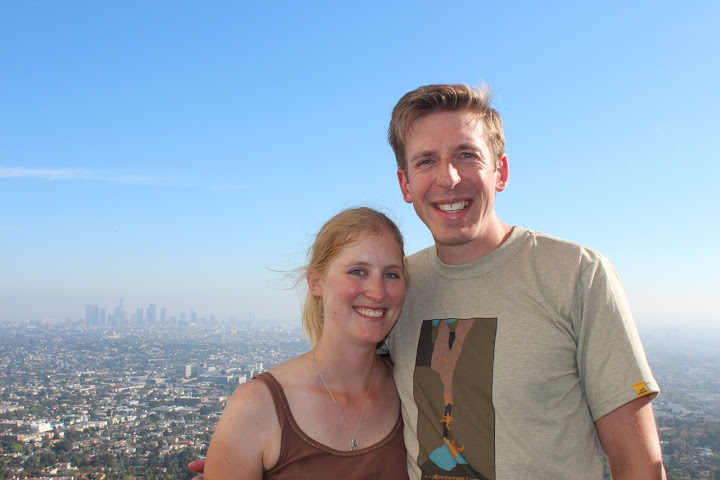 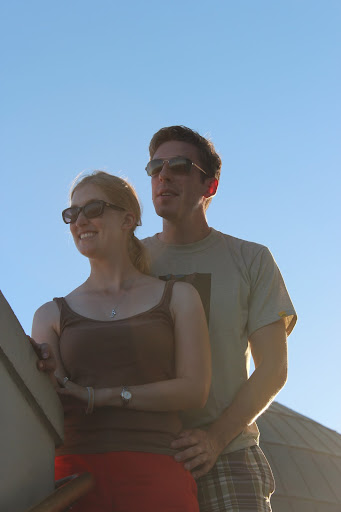 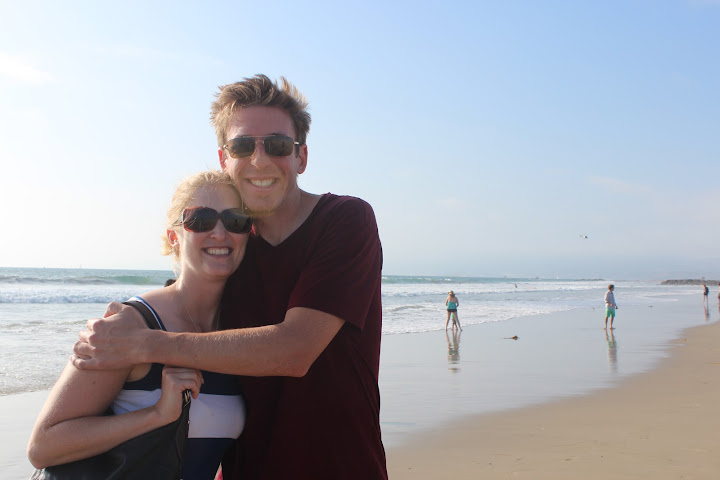 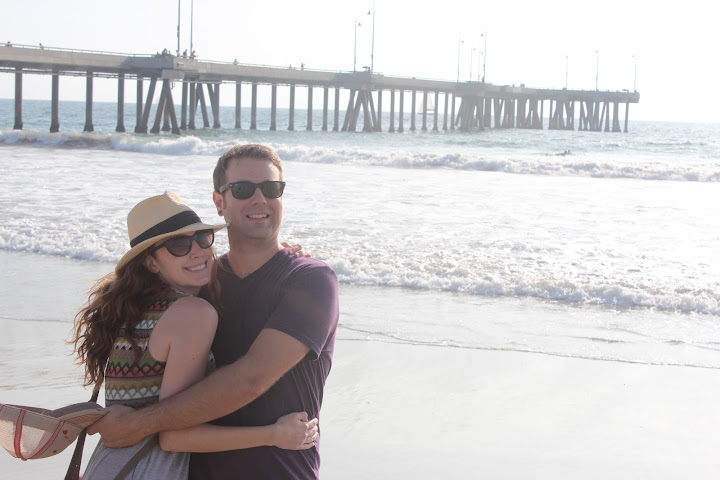 Another big THANK YOU to our amazing hosts in LA