Named “Deep Blue Lake” at different times by different sets of explorers, and for a good reason. I was very impressed with Crater Lake. It was one of those places that I was worried wouldn’t meet my expectations, but it was absolutely beautiful and we had a great time there. 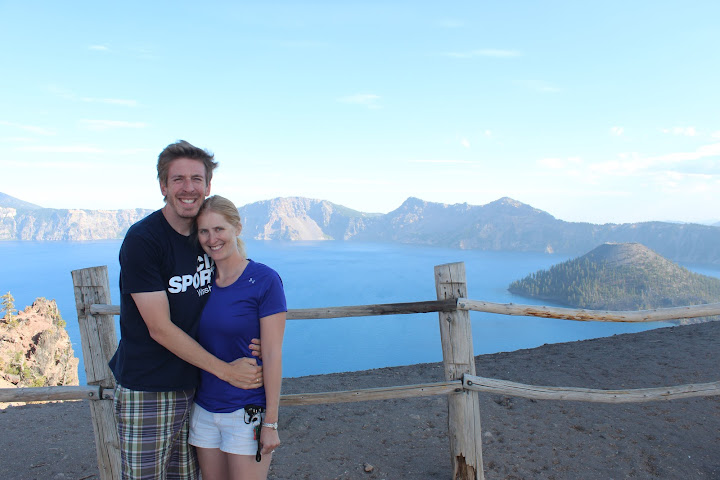 The drive from Portland to Crater Lake was long and a bit boring. We stopped briefly a few times, once to grocery shop and once to eat a picnic lunch in one of the national forests on the way. Just before entering Crater Lake National Park we started to notice (and smell) a lot of smoke coming from the forest. We later learned that there were two ‘managed forest fires’ occurring in the park. A managed fire is a fire started naturally (by lightening) which the park monitors but lets run its course. 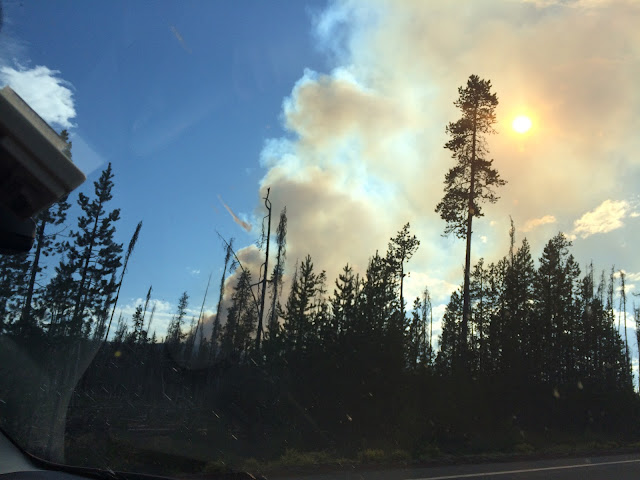 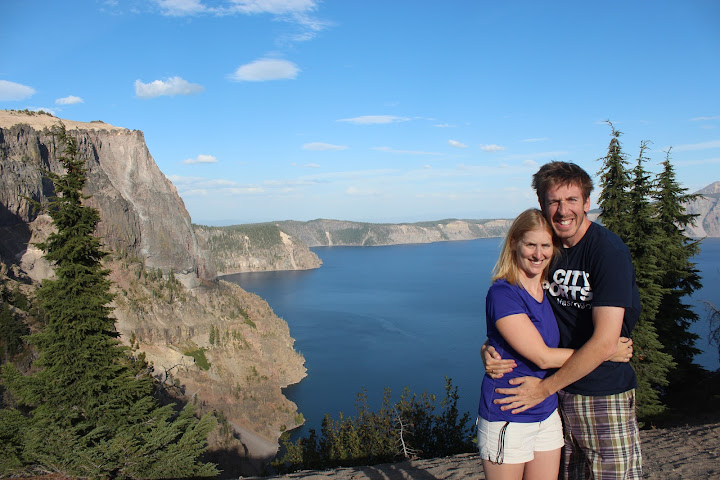 When we got to the park we drove to the first lake view and took tons of pictures. The lake is 21 square miles and is the deepest lake in the world. Because it is so pure and so deep it has a beautiful blue color to it, as no other colors from the light spectrum can escape. Instead of stopping at more overlooks, we drove straight to our camp site to set up. It was a bit warmer than the previous camping we’d done and now I consider us experts. We had the camp set up quickly and wood chopped so we sat down to play cards and have a beer. We ate a dinner of hot dogs cooked over the fire and chili cooked on our stove and enjoyed sitting by the fire until it ran out. Another nice part of camping was that the sky was much darker and clearing than it had been at Mt. Rainier. The sky was gorgeous and Jon even saw some shooting stars. 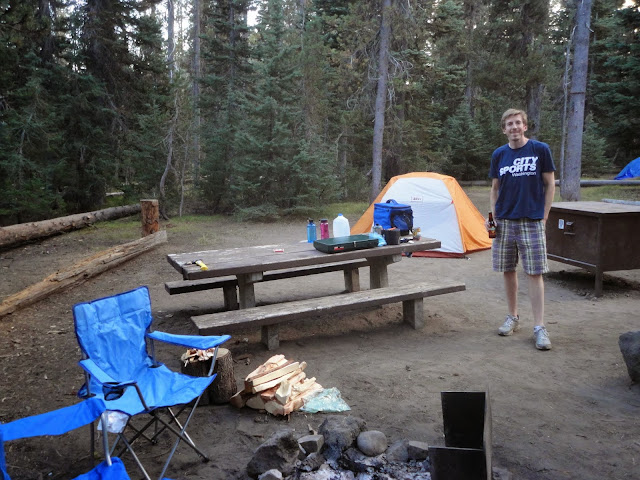 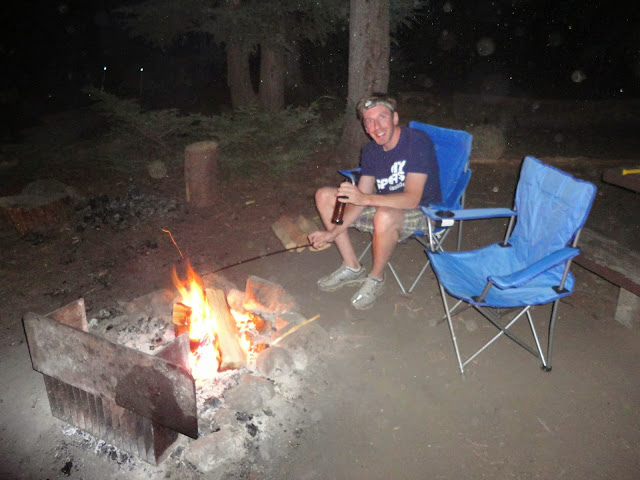 The next morning we set an alarm clock so we could wake up in time to take the lake shuttle. Well, the alarm went off and we decided to sleep in (plus skipping the lake tour would save us some money). From our camp the first stop of the day was Rim Village and the visitor’s center. The Visitor’s center had an overlook called Sinnotts Memorial. On the overlook we met Deborah Bird, one of the park’s residence artists. Debbie was very nice and even gave us some photography tips. She was working on a piece of hers where she takes photographs of ice sculptures she makes as they melt. I understand the idea to be about environmental changes and global warming. 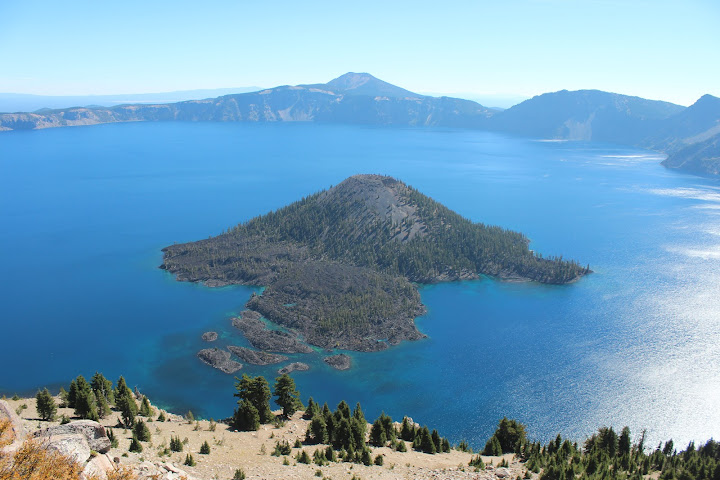 From Rim Village we followed the driving route recommended in our guide book and stopped for a few hikes. The first hike we did was called The Watchman. The Watchman is a 0.8 mile hike (one way) up to a fire lookout tower. The Watchman is also close to Wizard Island, the largest island in the lake which is a perfect cone volcano that grew out of the lake. It is named Wizard Island because it resembles a wizard’s hat. 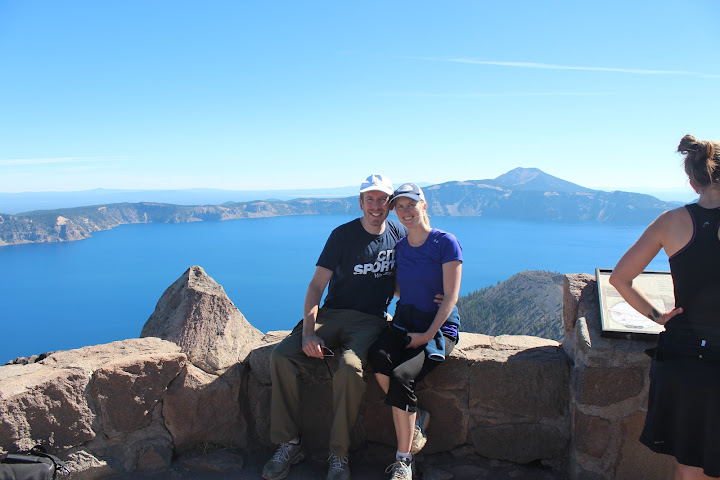 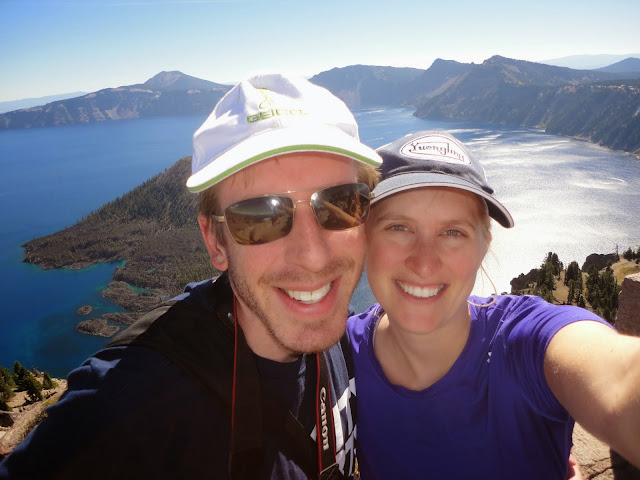 We continued along Rim Road stopping at overlooks until we got to the Cleetwood Trail. The Cleetwood trail is the only trail which takes you down to the water. It is 1.1 miles (one way). Walking down the trail wasn’t bad and we found some rocks on the water’s edge where we could sit and eat lunch while our feet soaked in the cold waters. Nearby a few swimmers braved the water and were jumping in off of a large rock. 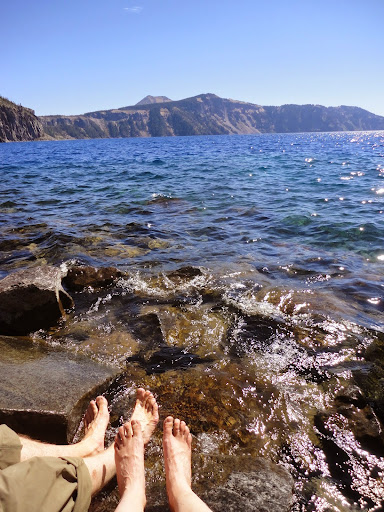 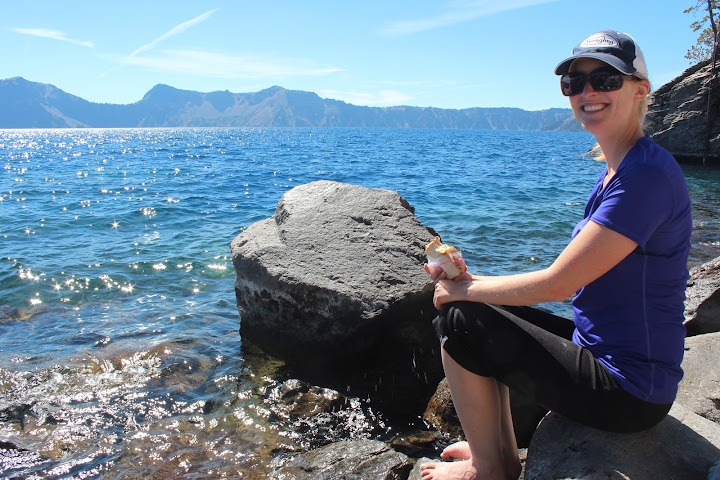 Our last trail of the day was Sun Notch, an easy 0.8 mile loop which overlooks Phantom Ship. Phantom Ship is a small rocky island that looks a bit like a boat. Its small sizes makes it seem to disappear from across the lake in some lighting. 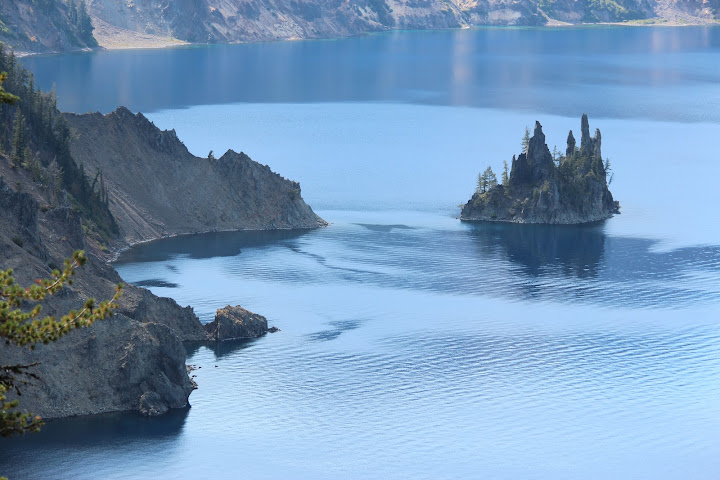 Our next stop will be Redwood National Park. Its a long drive so leaving Crater Lake we drove almost 5 hours to the small beach side town of Crescent City, CA to stay the night. For dinner we ate at 101 Hawaiian BBQ, before continuing down south the next day.

If you go to Crater Lake: