More than anything else, looking at the giant redwood trees made me feel small. It was like being shrunken and exploring a forest.

The day started out the same as most days we have during our the trip; Jon worked and I blogged for a few hours. We snacked on bananas and dry cereal from the supply of food we carry with us because we were in the rare hotel which didn’t offer a continental breakfast. When we started for the day, we went south through Redwood National Park which was the opposite direction from what our guidebook recommended.

Redwood National Park is run conjointly with three state Parks; Jedediah Smith, Del Norte Coast, and Prairie Creek. In fact the park name is actually Redwood National and State Parks. The previous day, to get to Crescent City, CA, we had drive through Jedediah Smith State Park. Route 199 weaves through the forest twisting and turning past some amazing large trees which is a great introduction to the park, and in retrospect we should have stopped a few times during our drive through.

We worked our way backwards through the forest following Route 101. Our first stop was to look at the beach. Of course in true Herrwego fashion it was foggy and rainy. For a while we were concerned that besides not being able to see the shore, we might not be able to see the tree tops of the redwoods through the thick fog. We stopped at Lagoon Creek and walked on a part of the Coast Trail to Hidden Beach. We were the only ones on the beach. Our hike ended at the tour attraction Trees of Mystery, but somehow their Paul Bunyan and Babe seeming like a fitting greeting. We walked back along Route 101 which was a bit harrowing due to the sharp curves and non-existent shoulder. 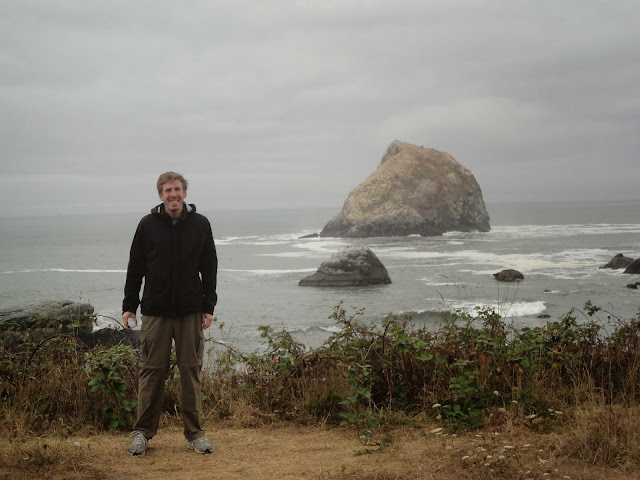 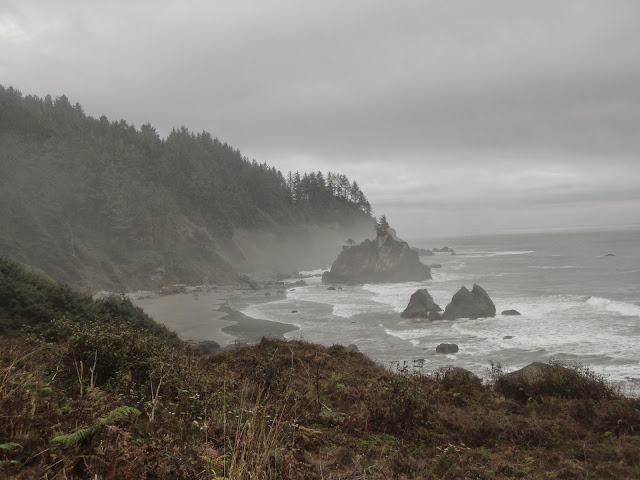 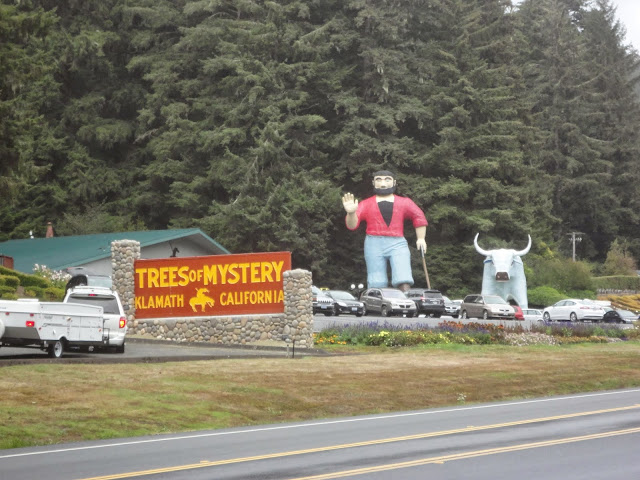 Our next stop was to aptly named Big Tree. Big Tree is estimated to be 1,500 years old and is 21.6 feet in diameter reaching a height of 308 feet. Big Tree was pretty amazing to look at. We also did some quick hikes around the area, like the circle hike, where we were able to view dozens of other big trees. 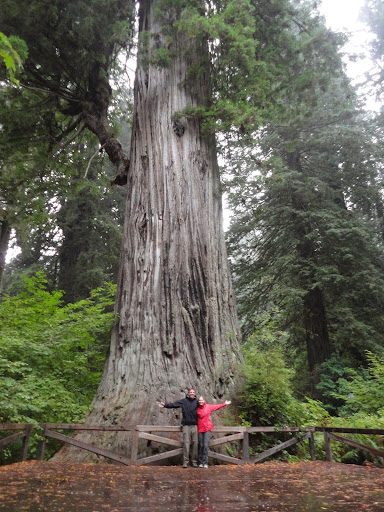 In front of Big Tree 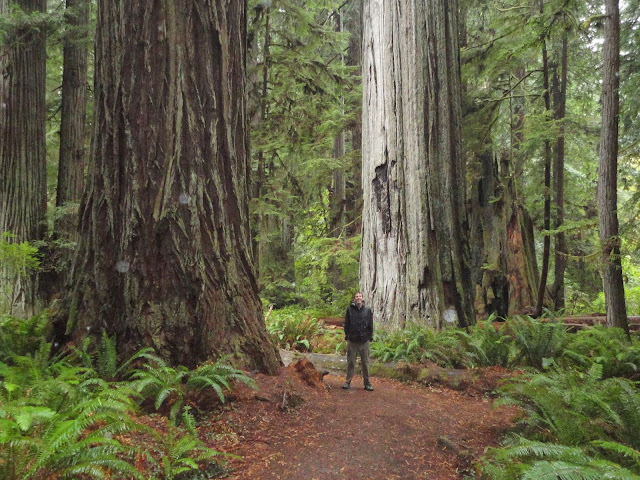 All of the other trees were pretty big too 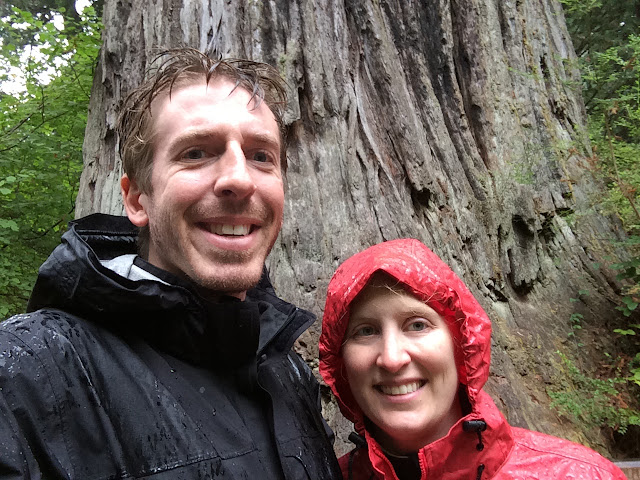 We stopped briefly in the Prairie Visitor’s Center. The attendant at the center was nice and suggested several hikes that sounded great, but that we decided we ultimately didn’t have time for. Instead we took the guidebook’s suggestion to visit Lady Bird Johnson Grove; dedicated to first lady Johnson for her efforts in creating the National Park. The one mile grove walk has a self-guided brochure to talk about the trees. Once again the most amazing part was seeing numerous large trees around every bend on the trail. Before leaving the park we stopped briefly at the Kuchel Visitor Center. 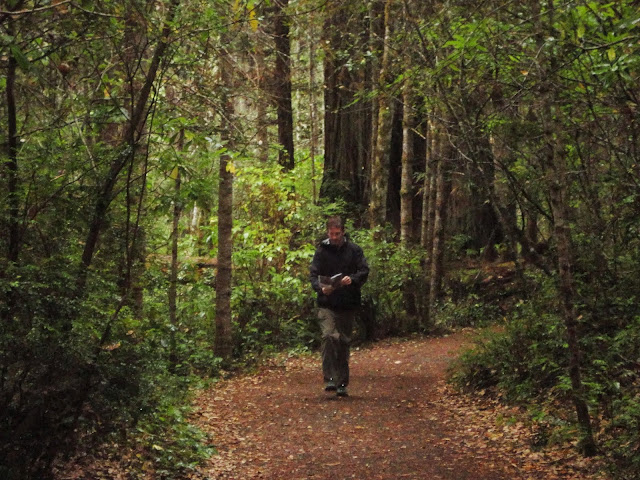 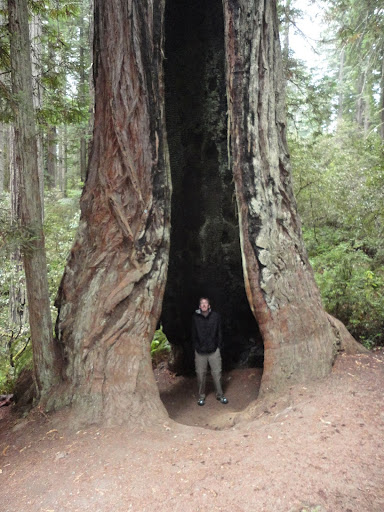 From the park we drove to Eureka, CA for the night. The hotel recommended Samoa Cookhouse and a quick yelp search confirmed it was a good choice. After spending a day in the rainy, chilly forest the Samoa Cookhouse provided the perfect soulfood we needed. The Samoa cookhouse is said to be the last surviving cookhouse in the west serving food lumber-camp style. The cookhouse has a nightly rotating menu and everyone gets the dish of the night. The meal is served family style along with bread, soup, salad, potatoes, and dessert. We happened to be there on corned beef and fried chicken night which was excellent luck since I love corned beef. The restaurant also features a small museum room of logging equipment and old cookhouse equipment. 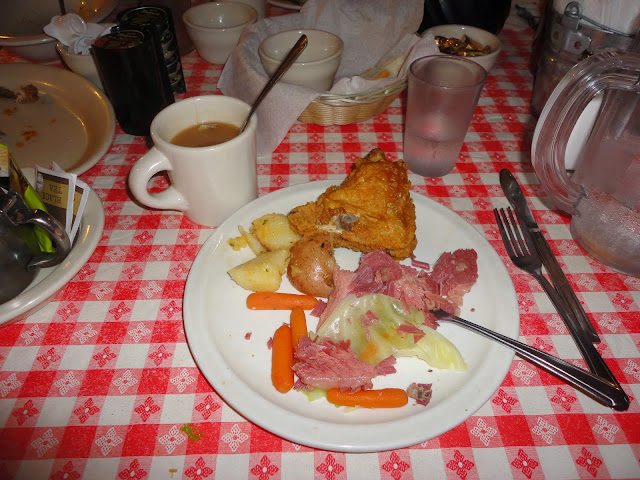 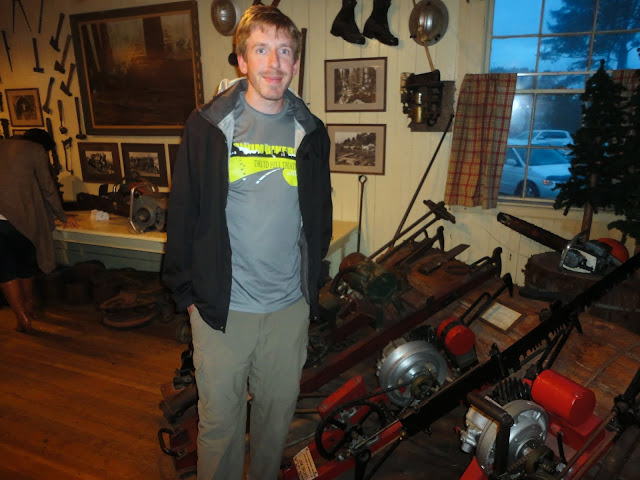 To end the night we stopped by the Redwood Curtain Brewery to sample some beers. The brewery seems like cool place with broad games, a nightly food truck, and lots of locals. 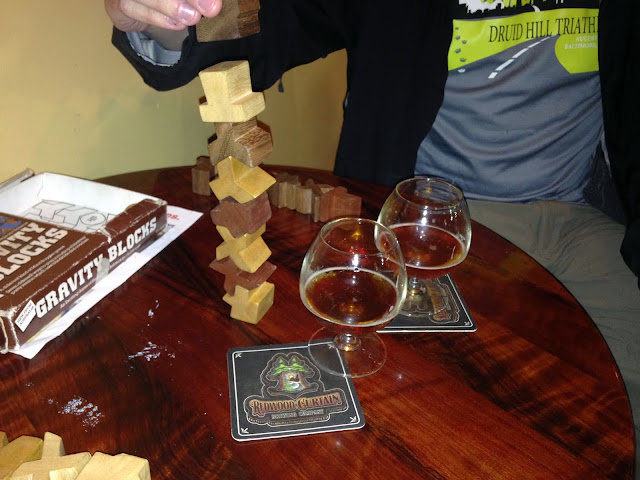 The next morning in Eureka, Jon got a haircut while I walked to the Carson Mansion. The Carson Mansion is said to be the most photographed Victorian House in the country and the model for several fictional houses, including the Haunted Mansion at Disney World. 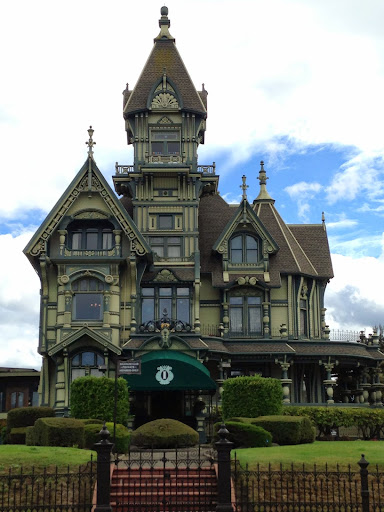 When we got on the road, we didn’t go far before stopping at the Loleta Cheese Factory which we had seen a flyer for at our hotel. Unfortunately they were not making cheese the day we stopped, however we were surprised to find that they had been featured on Diners, Drive-ins, and Dives (our second stop of the trip to have been on that show without us knowing until we went there). The host of D, D, & D’s is from the area and featured several local establishments on a ‘hometown favorites’ themed episode. The lady was very nice and we bought a block of cheddar. She also directed us to Clendenens Cider Works a few miles away for fresh apple cider. At Clendenens we bough a few apples, dried apples, and a bottle of cold cider.

We took a scenic detour off of the highway and drove down the ‘Avenue of the Giants‘, a road on the outskirts of Humboldt State Park with many redwoods along it. In the state park we stopped to have a lunch of our cheese and apples before a short 2.5 mile hike on the Drury-Chaney Loop. 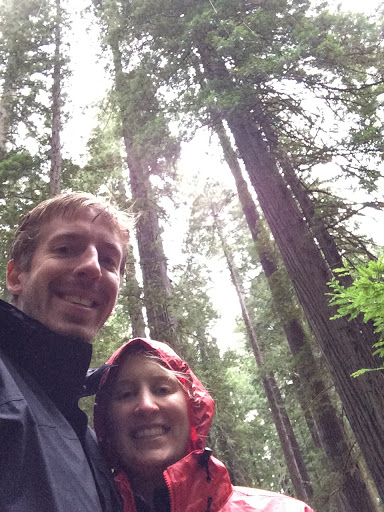 We had wanted to do another hike, but found out it was longer than we anticipated so we decided not to take the time.

Our last stop of the day, and our hotel for the night, were in Mendocino, CA, a small beach town known for its seaside bluffs. We stayed in the Hill House Inn. After checking in we walked down to main street and the Mendocino Headlands State Park. The town was very quaint and with its rocky beach felt more like a New England Beach town to me, or maybe like St. Michael’s but even smaller and less commercialized. In the park we walked along the bluffs enjoying the ocean views at sunset. We finally were forced to leave the park when the mosquitoes found Jon. For dinner we went to Patterson’s Pub, which based by the crowd might just be the most popular place in town. 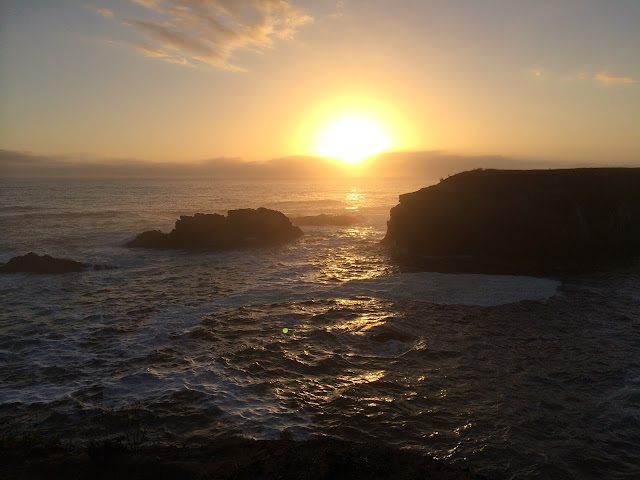 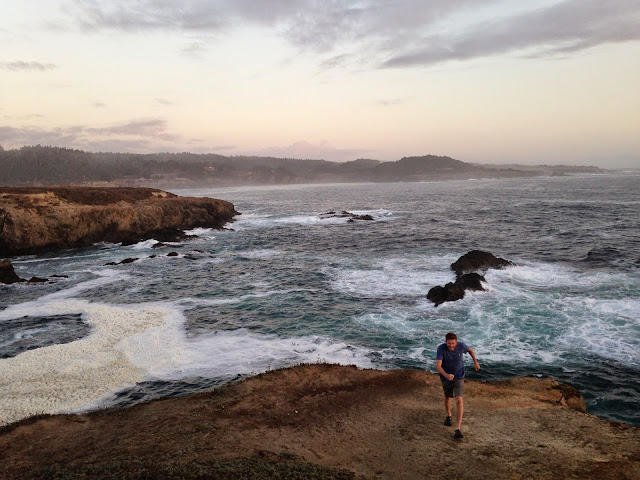 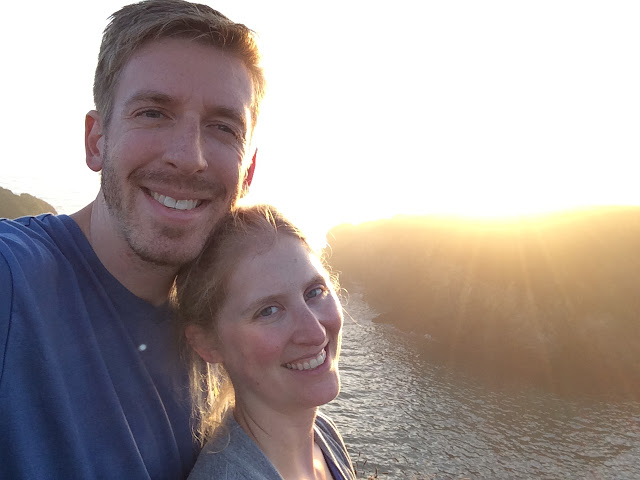 In the morning we drove straight to San Francisco. Our drive was still almost 5 hours and we followed the famous CA Route 1 down the coast. Unfortunately it was very cloudy and foggy so we weren’t able to see much of the ocean even though at times the road was right above it. 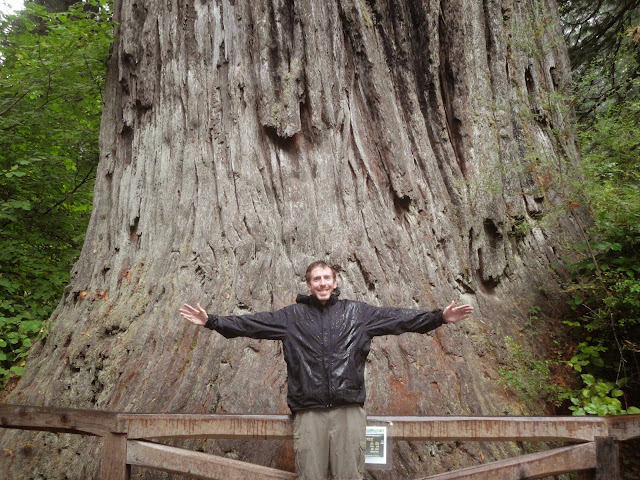 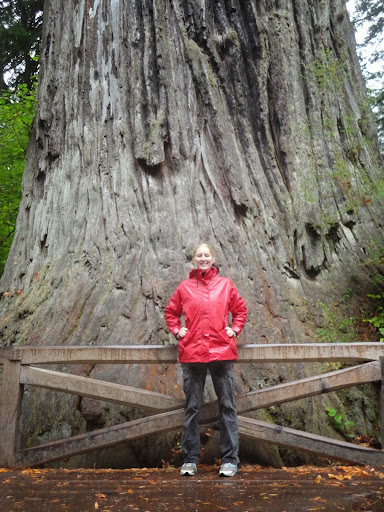 One thought on “Redwood National Park and Northern Route 1, CA”