Portland was a great stop for good food and a good break between national parks on our way down the west coast.

Next on the map was Portland and we decided to spend 2 nights there.  As usual we showed up without a hotel reservation and decided on a cheap hotel close to public transportation.  As we were hungry, we immediately focused on what would be for dinner. Killer Burger was recommended by the hotel, but we also found that it was voted best Portland burger in 2014. To get there we took the lightrail system from the hotel which seemed to work out very well for us. Jon ordered their most interesting burger which featured a peanut butter sauce while I had the blue cheese burger. Both really hit the spot after our morning hiking at Mount Rainier. 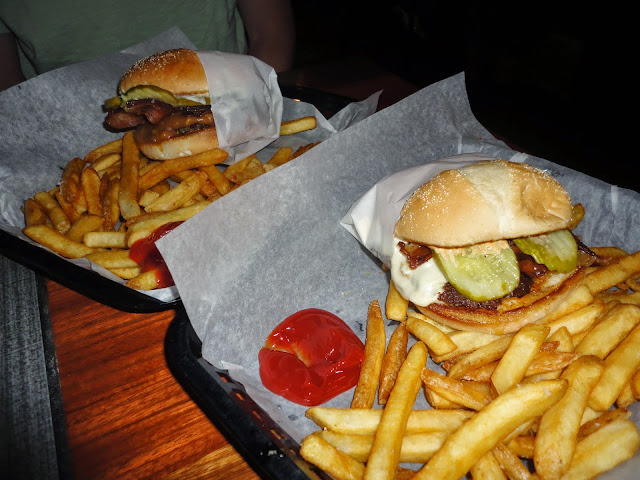 Sunday started out slow for us. We spent time debating if the drive to Mount Saint Helens from Portland would be worth it versus actually seeing Portland. We decided that instead of rushing to get to Mt. Saint Helens, we would take it easy in Portland. We started with breakfast at Mother’s Bar and Bistro. The restaurant was cute and a bit kitschy to look like ‘mom’s house’. The food however was excellent. I had a ‘green eggs, not ham’ scramble and Jon had the Mike’s Special Scramble. Then we went to the hotel to relax. 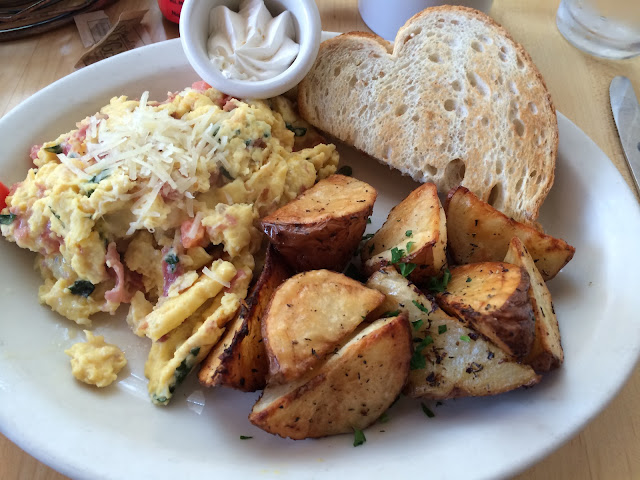 When we ventured back out, we bought day passes on the streetcar and rode to the Pearl District to walk around. It was hot and to cool off we took a break in Powell’s Bookstore, a block sized store. We walked around some more and got ice cream at Cool Moon. Finally we headed to Chinatown to try the Old Town Brewing Co. The Old Town Brewing Company is in Old Town Pizza which smelled amazing but we didn’t try any food. To kill more time before dinner we started to walk to Bridgeport Brewing but first saw Deschutes Brewery and stopped there instead, as it had well deserved good reviews on Yelp. 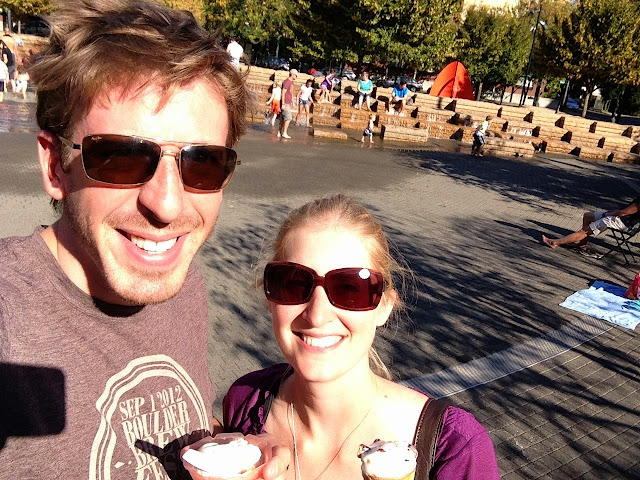 Ice cream in the park

For dinner we jumped back on the streetcar and rode to Serratto in Nob Hill. Serratto was very good and one of the more pricey meals of our trip. 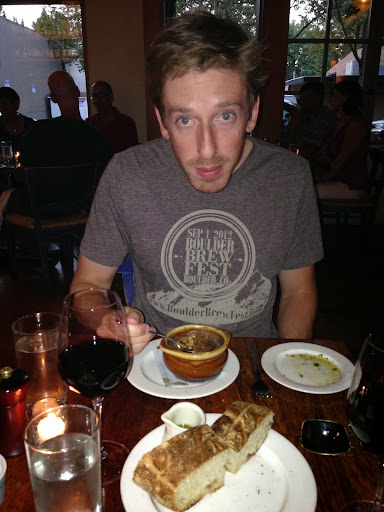 The next morning we had one final stop to make in Portland before leaving; Voodoo Doughnut. Somehow before arriving in Portland, Voodoo wasn’t something we were familiar with (although it has been featured on a number of TV shows; both cooking shows and referenced in pop-culture based fiction). On our first night in Portland we noticed a number of people walking towards us with pink pastry boxes and saw the line for Voodoo. A quick google search later and we knew we wanted to make it a stop. We waited about 15 minutes in line before ordering their best selling maple-bacon bar, the oreo and peanut butter covered Old Dirty Bastard, and a peach fritter the size of a frisbee. All of the donuts we sampled were fabulous and definitely left us with a sugar rush. 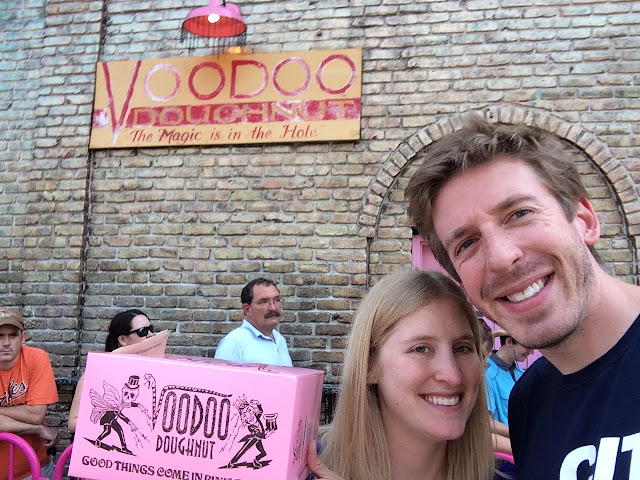 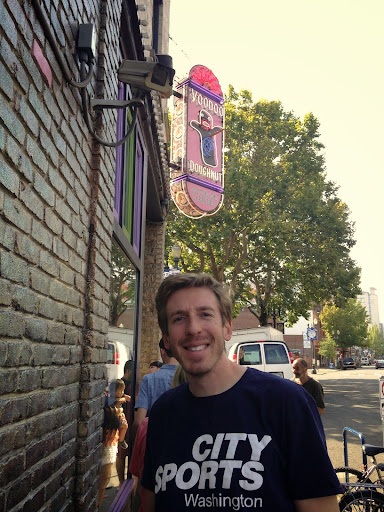 In line at Voodoo 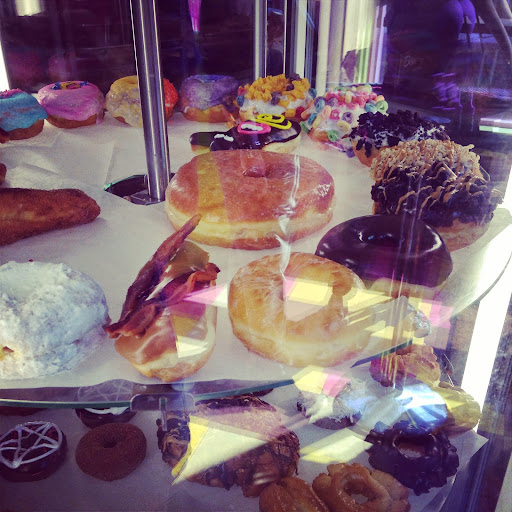 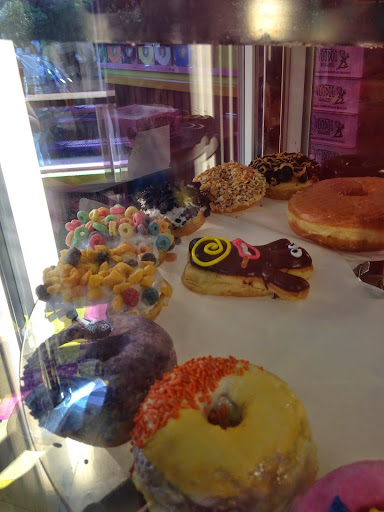 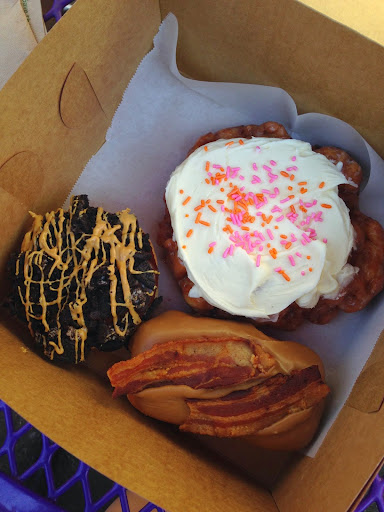 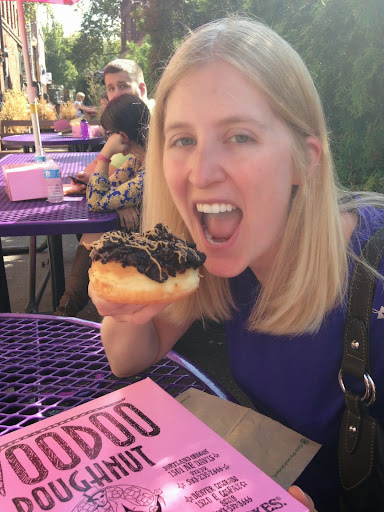 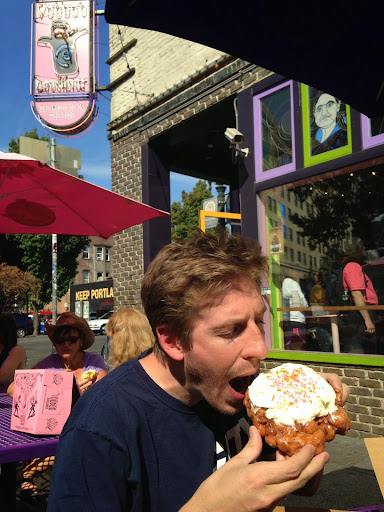