The Badlands, our first national park of the trip! The Badlands have a 23 mile scenic loop which we followed and chose our stops based on a National Geographic Parks Guide we have. We took lots of photos at the first overlook. 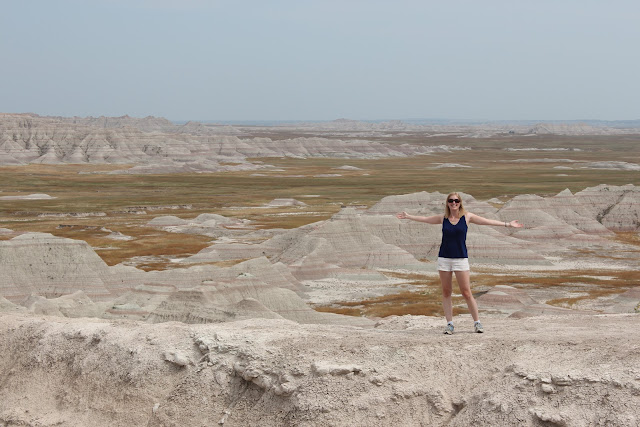 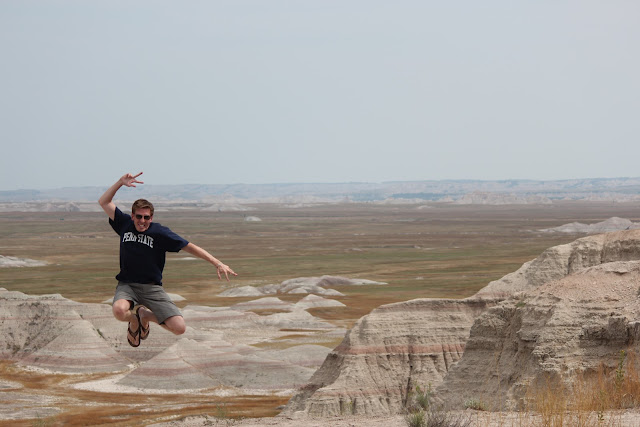 The second overlook also had trailheads for three short hikes. We did the first hike, the door, which is 0.8 miles round trip. The hike was very different, as it was over almost unworldly terrain. Unfortunately it was 100 degrees and the heat wore me out for subsequent hikes that day. We enjoyed driving through the rest of the scenic loop and then into the Sage Creek area where we saw prairie dogs, big horn sheep, and even a few buffalo from afar.  We thought about camping in the park, but the temperature put an end to that discussion. 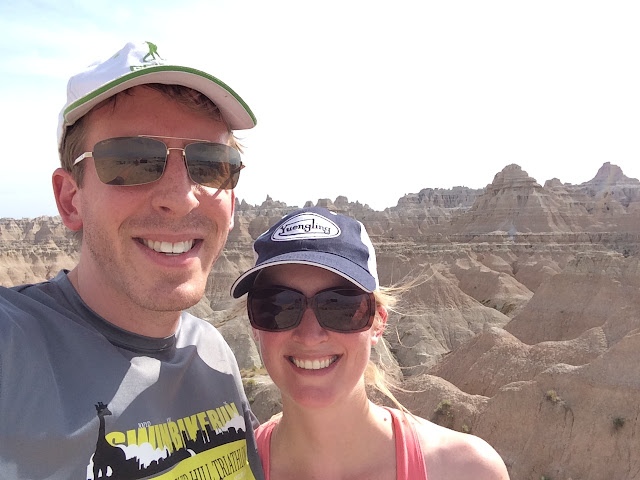 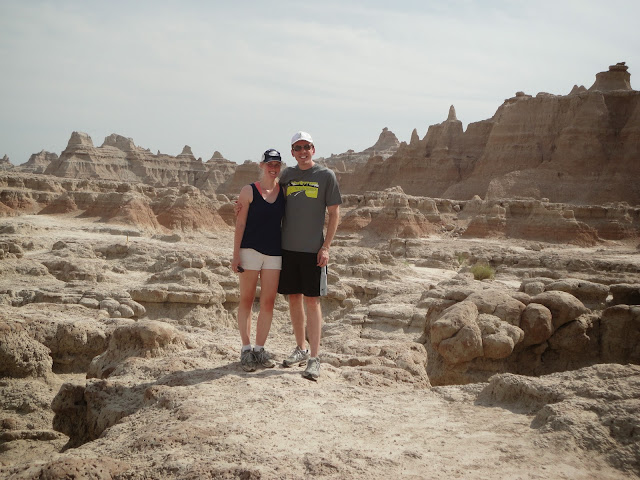 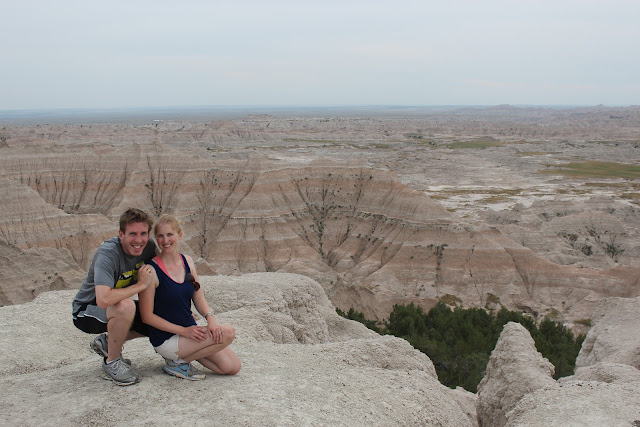 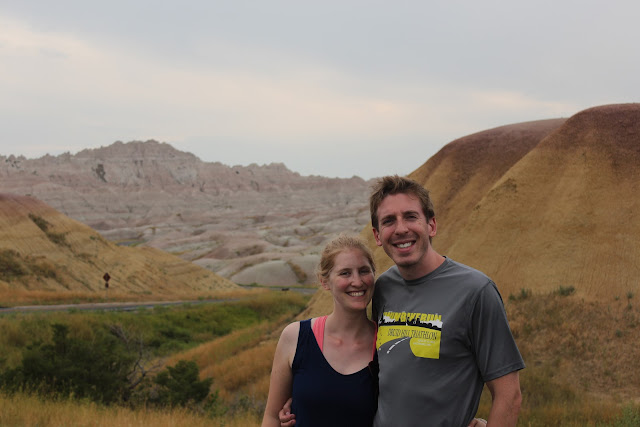 We spent the night in Wall, SD. Our first stop was to Wall Drug, which was advertised in hundreds of billboards when driving in, and several friends told us about.  We almost had dinner there, but unfortunately everything was fried and we wanted healthy food. We ended up eating at the Red Rock Restaurant, however everything there was also fried. Wall, SD doesn’t seem to have many restaurant options. After eating we went back to Wall Drug to walk around.  It was a neat store with lots of specialty shops in it. We spent the night at Ann’s Motel which was very nice and accommodating. 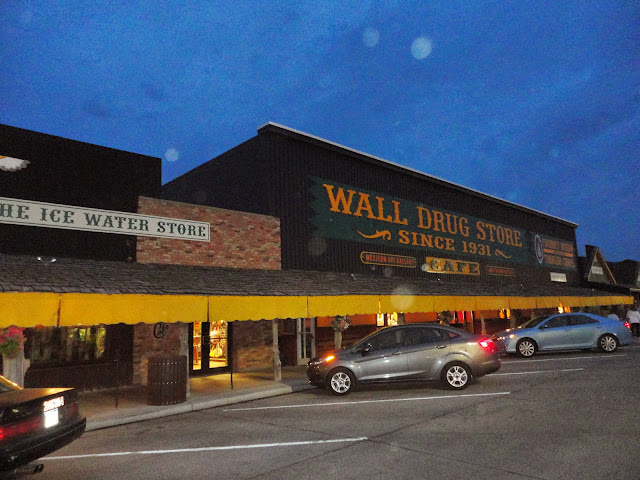 Early the morning we went back to Wall Drug for a quick breakfast (it seemed to be the only place in town open) and then drove back into the Badlands for a hike. We hiked a 4.2 mile loop which starts at Saddle Pass, follows the Medicine Loop, and comes back on Castle Trail. Saddle Pass was a steep climb up over the rocks. Once past the rocks, the rest of the hike was mostly through high grass plains with jagged rock formations along the way. 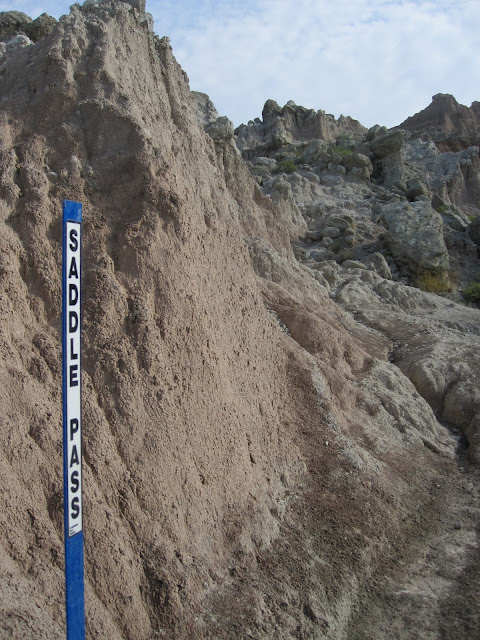 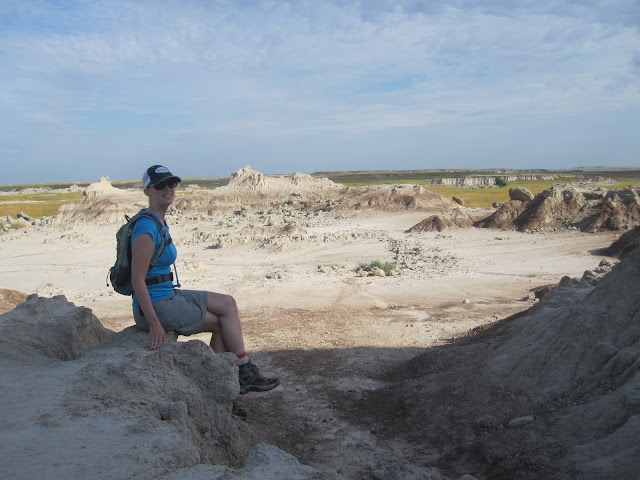 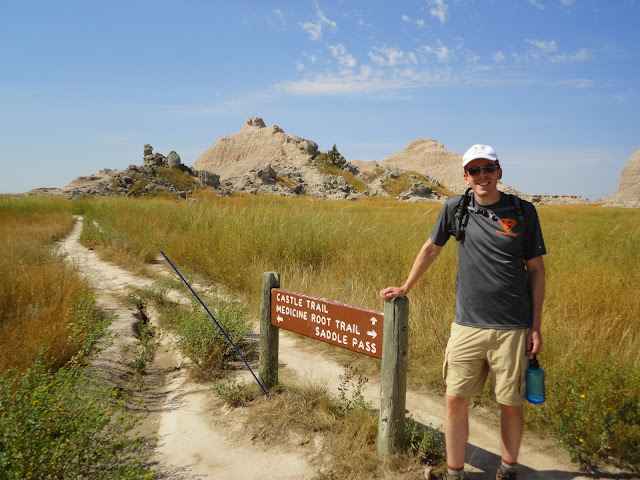 Before leaving the park, we also decided to hike the Window and the Notch Trails. If you are in the park and can only do one hike, I recommend the Notch Trail which I think was our favorite. It is a 1.5 mile roundtrip out and back with a ladder that takes you up the rock formations to an overlook. Lucky for us, the temperature only peaked out at about 98 that day. 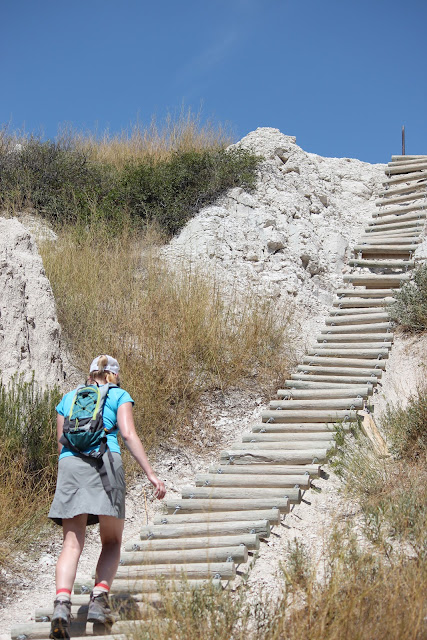 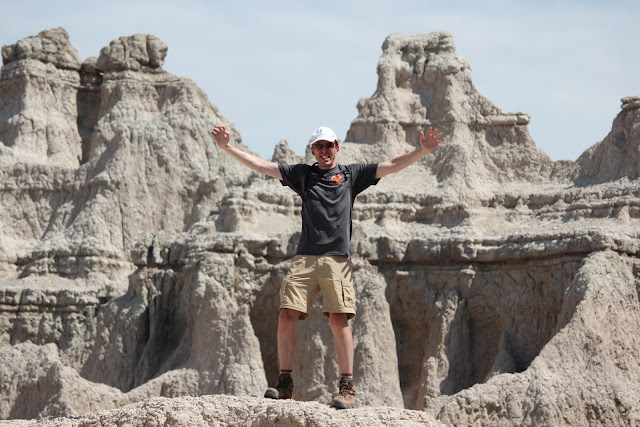 Jon on the notch trail 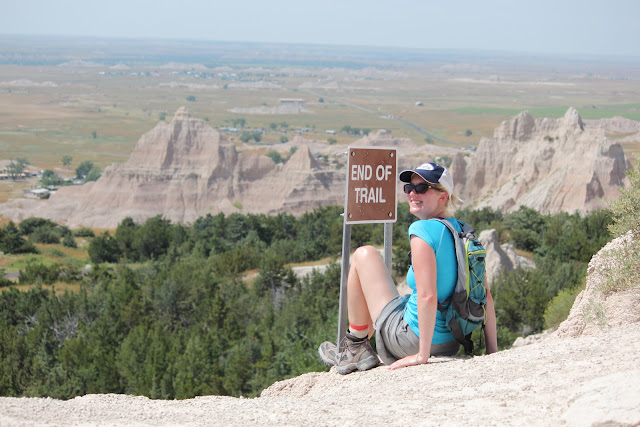 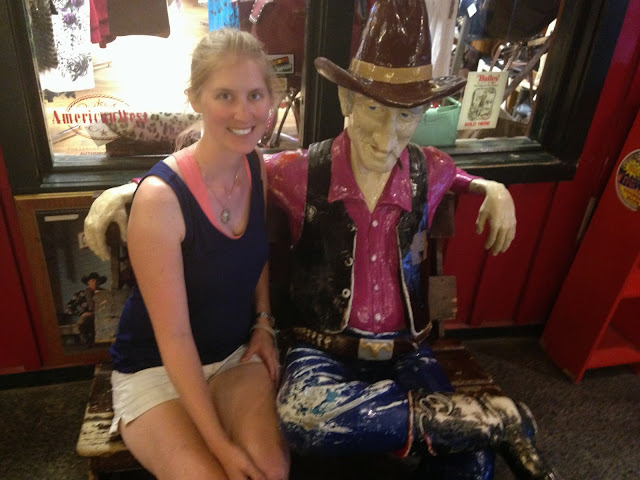 I found this gent at Wall Drug. Remind anyone else of Kennywood’s Cowboy Joe??

There are too many awesome photos for me to display, but I’ll try to post the best. 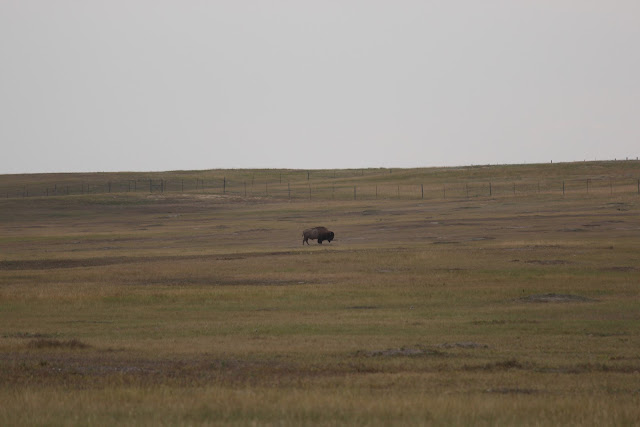 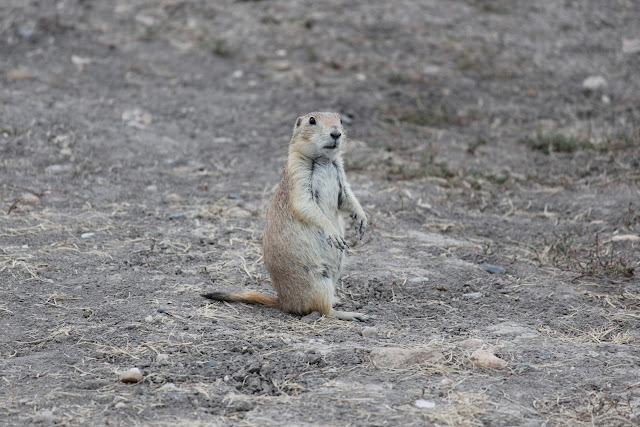 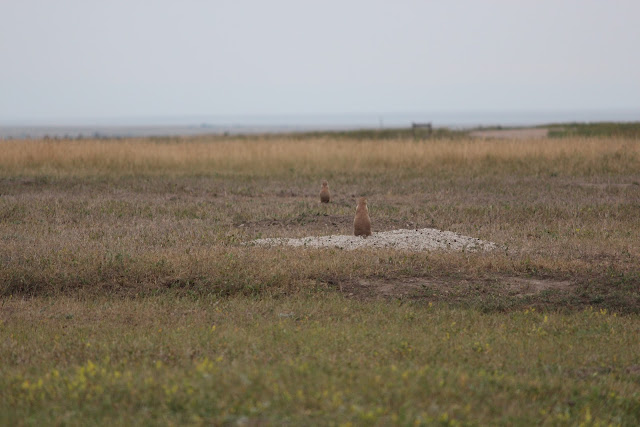 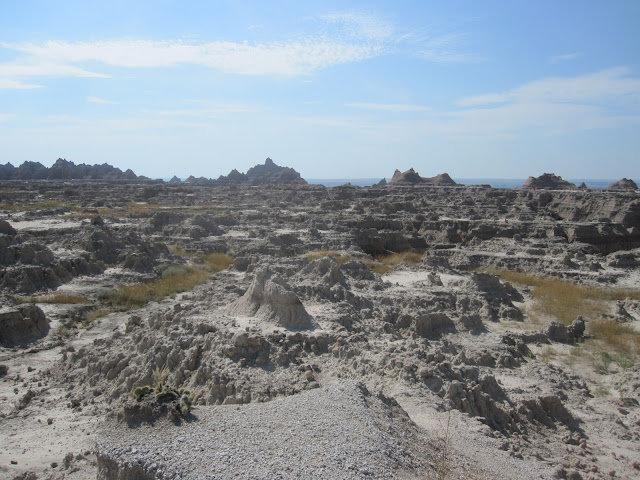 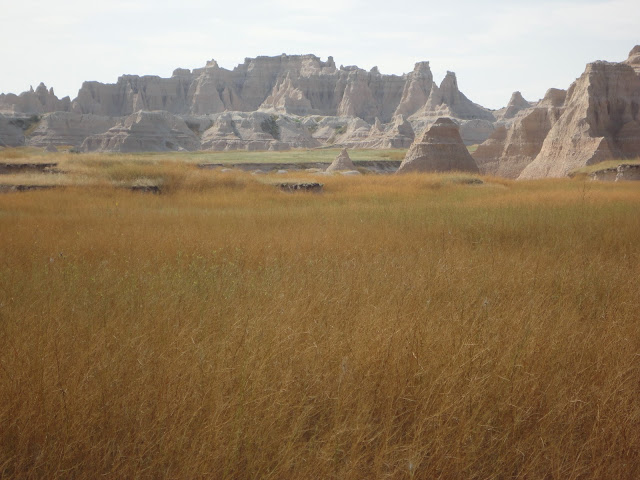 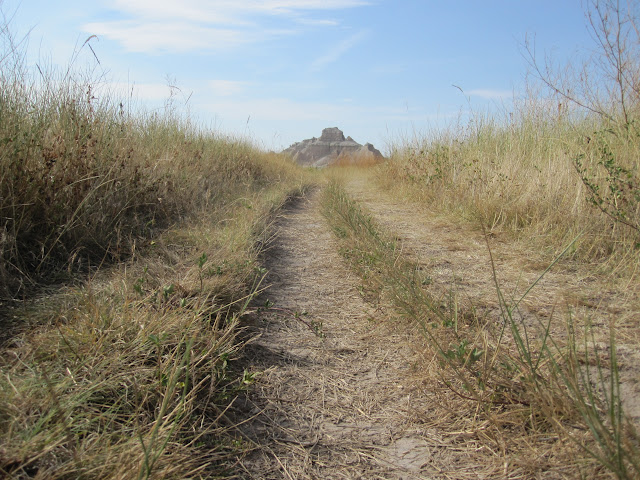 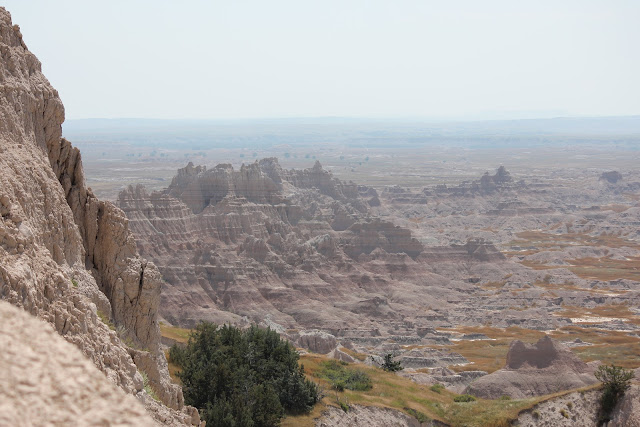 Our final look at the Badlands