Our current goal of two National Parks per year was met early in 2017 when I had a week of vacation to use before April. Our original plans to go to Puerto Rico were postponed for the best possible reason, pregnancy! Instead of risking Zika we changed our plans to Sequoia National Park and then changed them again after seeing the weather in Sequoia.  At almost three months pregnant we spent a week hiking and exploring the southwest.

We flew out of BWI airport at 10am and after 7 hours of travel we touched down in Phoenix, Arizona at 2:30pm (thanks time zones). We used yelp to find a lunch spot and ended up at La Santisima.  We were warned when we arrived that it would be a long wait for a table, but surrounded by their best taco and best salsa bar awards we stayed. We were eventually seated just to endure longer waits for the server and then the food. The food wasn’t worth the wait and neither were the salsas. The highlight of our meal was the specialty drink, Horchata with fruits and pecan. 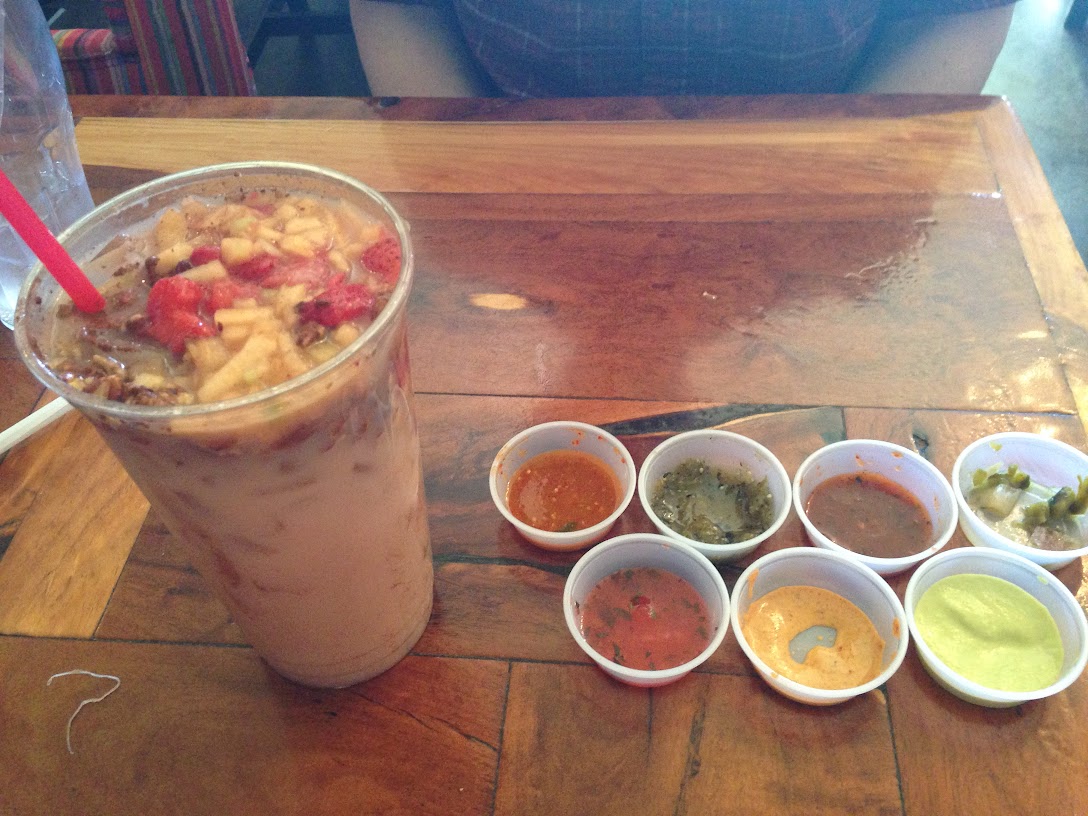 Horchata and a sampling of salsas from La Santisima

From Phoenix we drove straight to Holbrook, Arizona, the closest town to Petrified Forest National Park, stopping only a few times to take pictures of cacti. 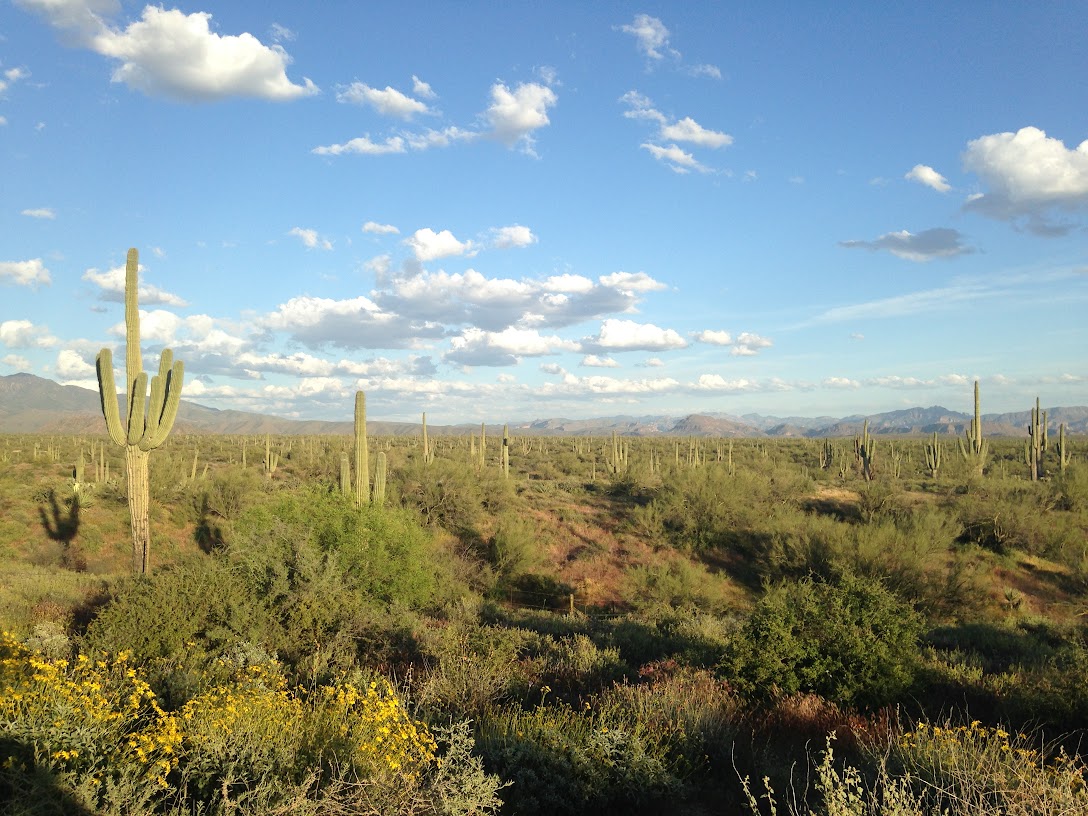 Our first stop after breakfast at our hotel, was a grocery store. We’ve learned by now that National Parks don’t have always have snacks and food mid-way into the park where we want it most. We drove to the south entrance of Petrified Forest and to the Rainbow Forest Museum. 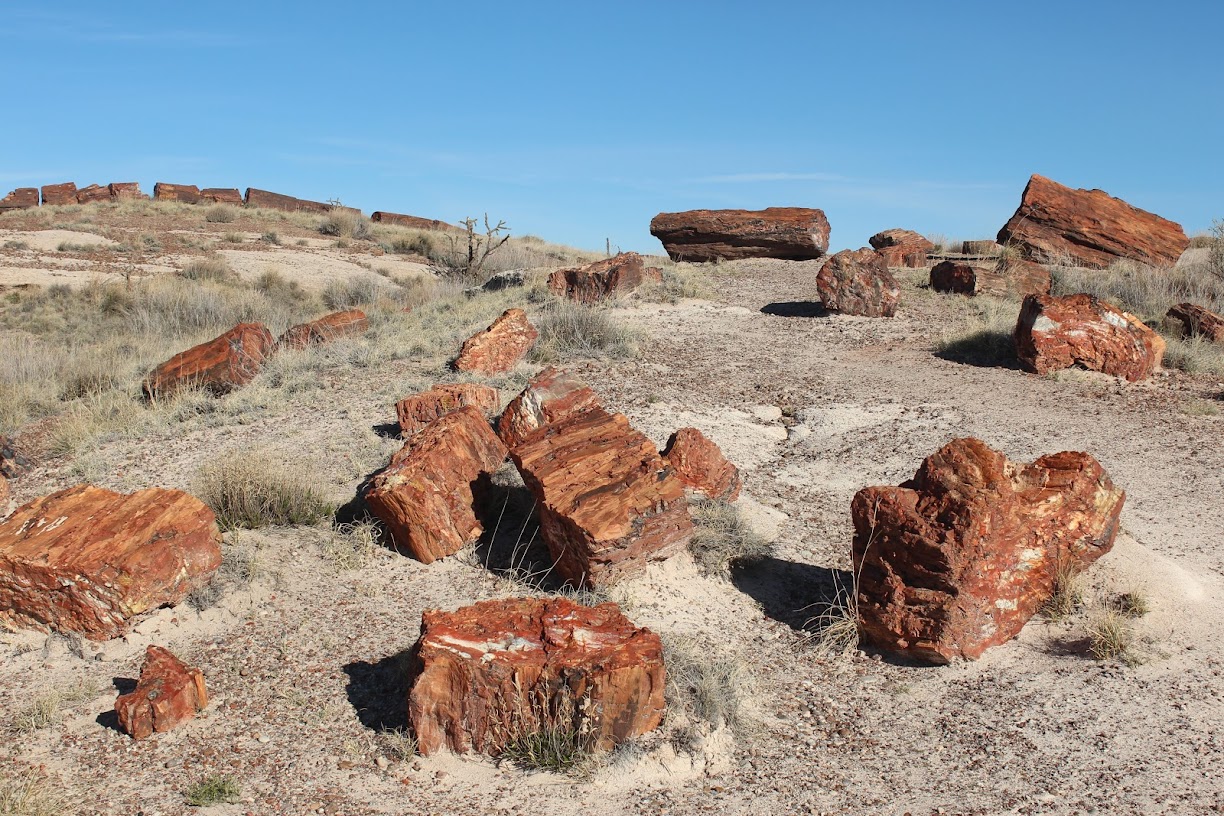 We crossed the road and continued our hiking around the 1.6 mile Long Logs. It wasn’t a bad hike, but by the end of it petrified wood had lost its excitement.  We continued north into the park and debated about stopping at Crystal Forest. Lured by the name, we did. The logs along the 0.75 Crystal Forest trail didn’t prove to be more spectacular or crystal-y than the other petrified wood. Then, our luck changed. A volunteer who worked for the park approached us and asked if we had any questions. After starting off by stumping with a hard chemistry question about silica we had a nice chat and asked him to recommend hikes. He informed us that when you aren’t in an area of paved trails, the park is wilderness land and you are free to walk wherever you choose. He then told us about his favorite hikes to see Petroglyphs in the park. Taking his advice, we backtracked to mile marker 22 and the hike to Martha’s Butte. 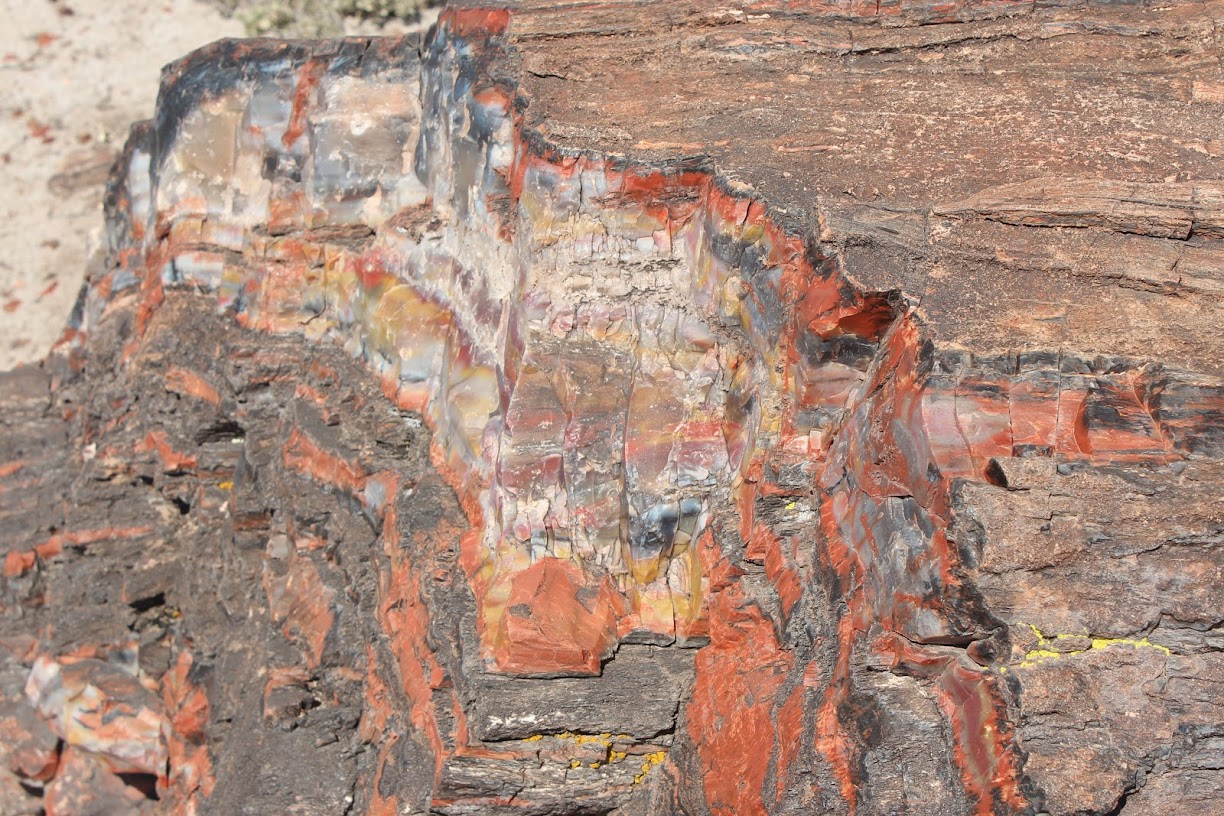 Martha’s Butte is a rocky outcropping almost a mile from the main road in the park. Without trails, some trailing finding skills are needed. Martha’s Butte can be seen from most distances and this would be a good hike for beginners to wilderness hikes. The hike starts by following a wash. When the wash turns, leave it and continue towards the Butte in the distance. There is another rocky feature to navigate around, but Martha’s Butte is soon visible again. Just before Martha, you’ll see Walker’s Stump, a piece of petrified wood which was thought for years to be a standing tree which got petrified. (That has since been proven wrong). It isn’t far now to the base of Martha’s Butte and the first petroglyph of a solar marker. After spotting the solar, it becomes a game to find more petroglyphs. By the time we had circled the butte and found the petroglyphs, the sun was high and we were ready to head back. The walk back was a bit more uncertain, but footprints were on the ground and eventually we got to a point where we could see the cars parked on the road. Going to and from Martha’s Butte we only passed 2 or 3 other sets of hikers. 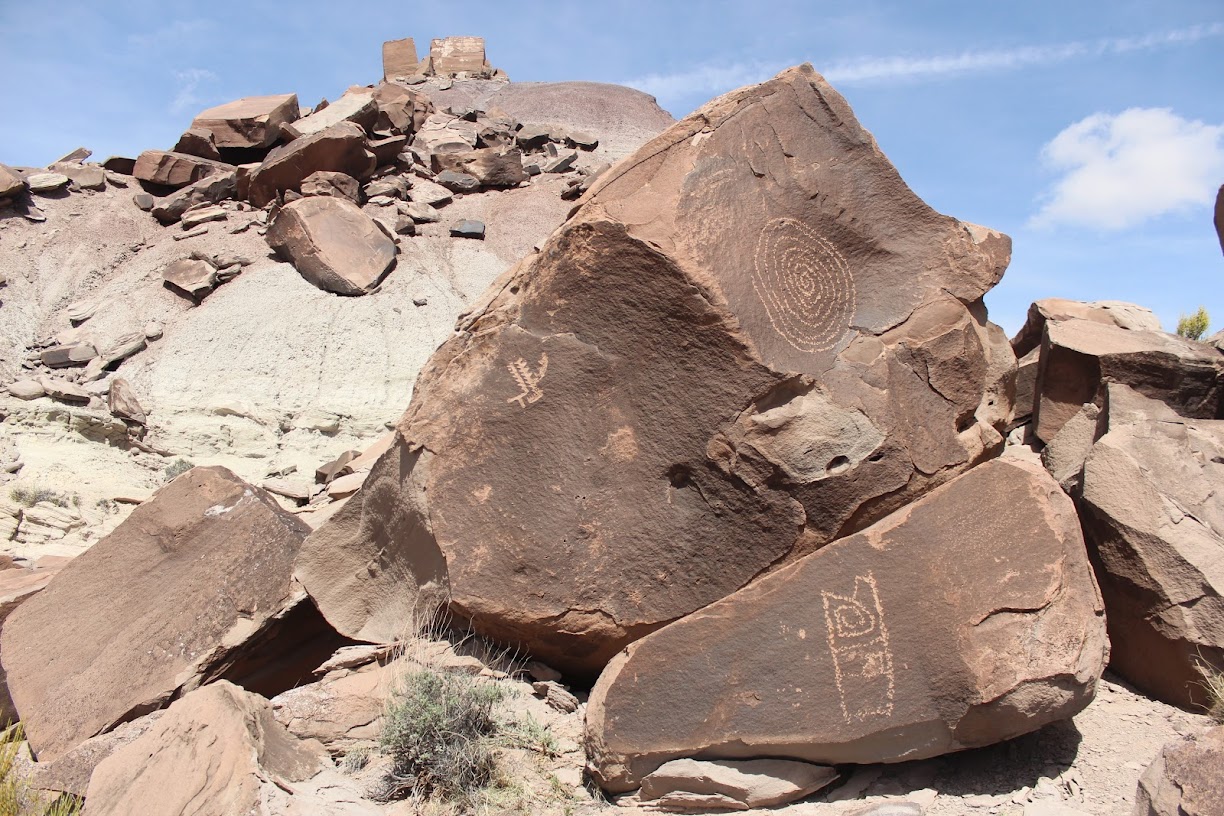 Blue Mesa was a nice 1 mile hike which I would recommend to anyone. The trail drops steeply into a gully but then flattens out. Walking through the gully you are surrounded by blueish badlands hills. The hike reminded both Jon and me of Bryce Canyon and hiking with the hoodoos, one of our favorite park experiences, crossed with Badlands. Blue Mesa wasn’t as stunning as Bryce, but it was nice and our first taste of the Painted Desert. 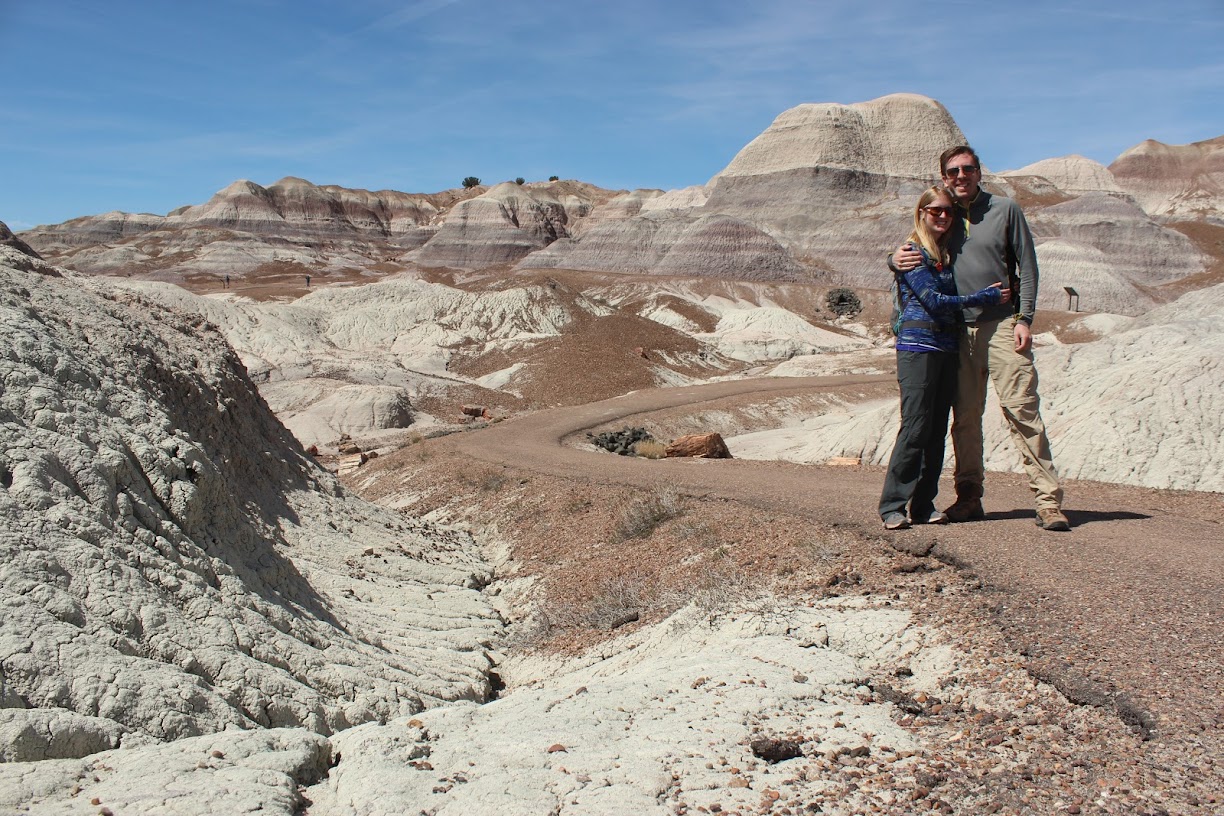 On our way out the park, we stopped a few more times at park features like Newspaper Rock (bring binoculars), various view points, and the Painted Desert Rim. At the end of the park is the Painted Dessert Visitors Center which had a small cafe which we ate in. We left the park mid-afternoon because we wanted to reach our next destination before sunset.

This is part 1 of a 4 part series documenting our 2017 Arizona/Nevada Vacation.

Although we didn’t do them, the volunteer we spoke with recommended two other hikes; 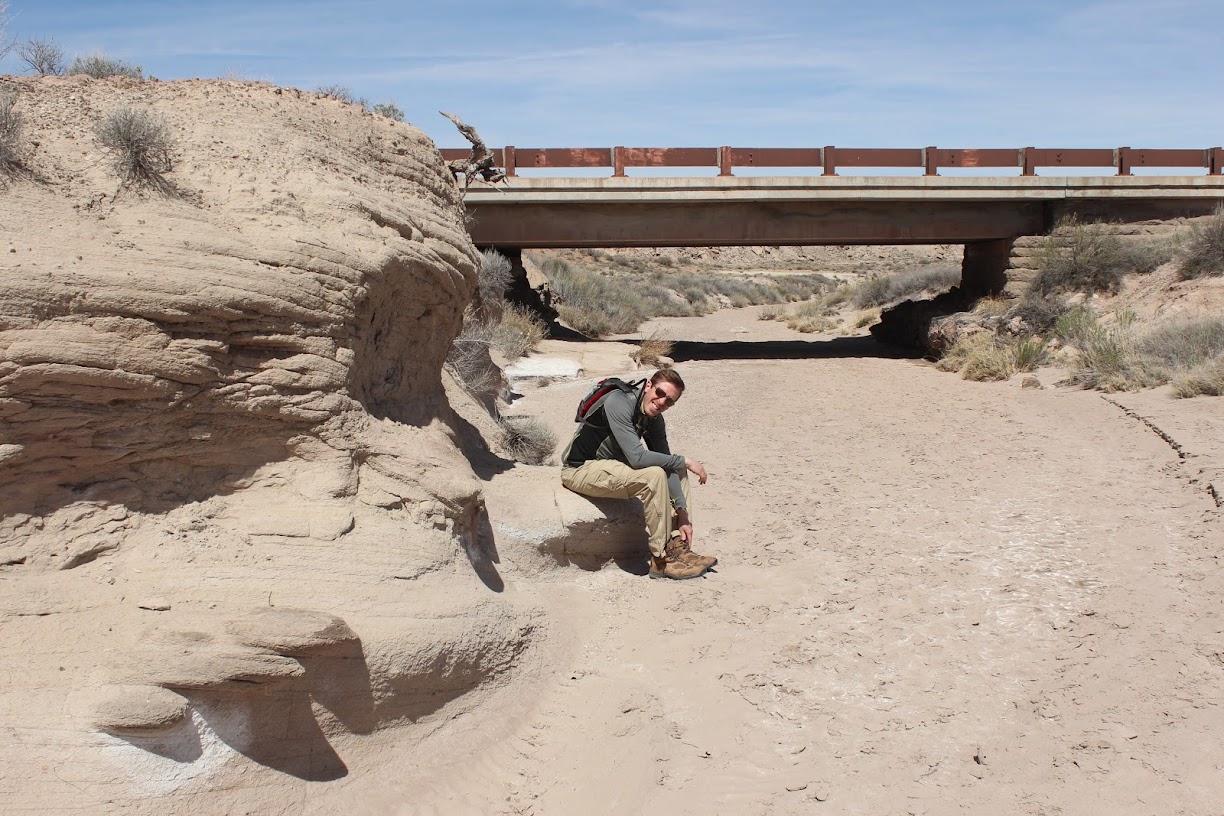 Start of Martha’s Butte, in a wash 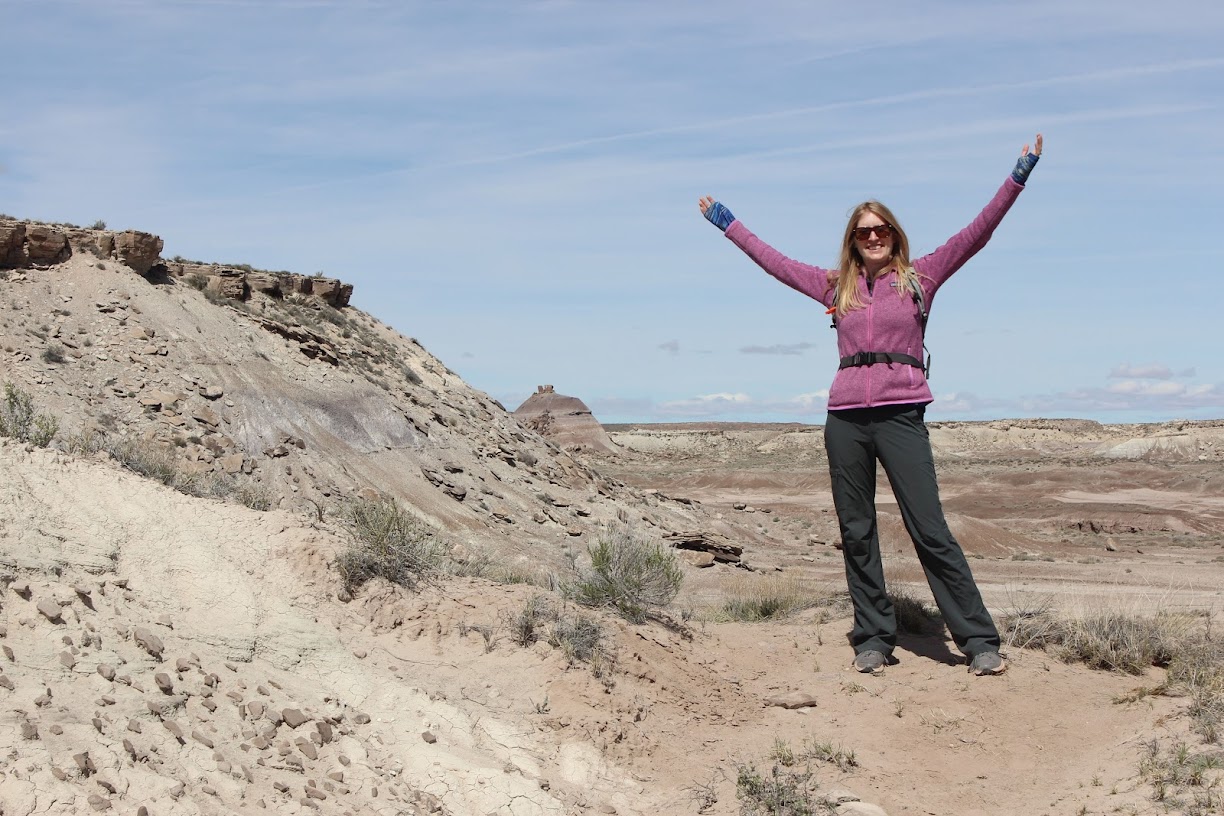 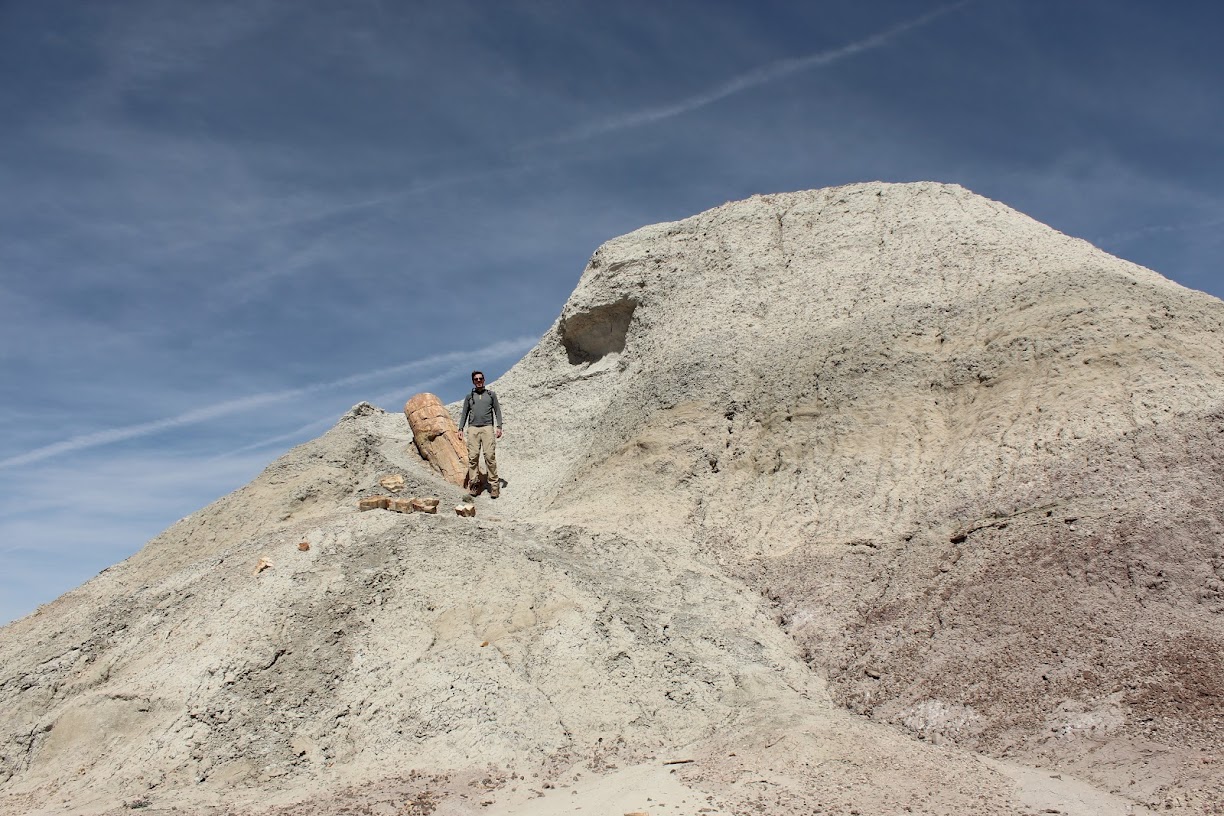 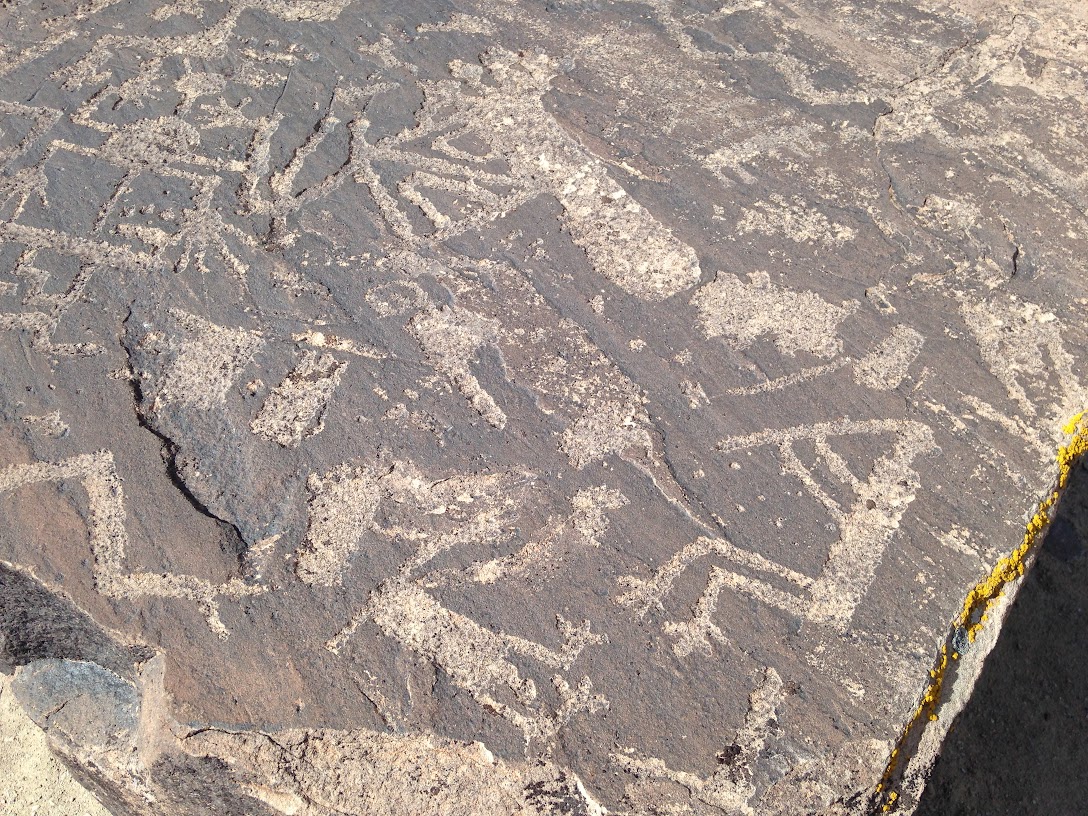 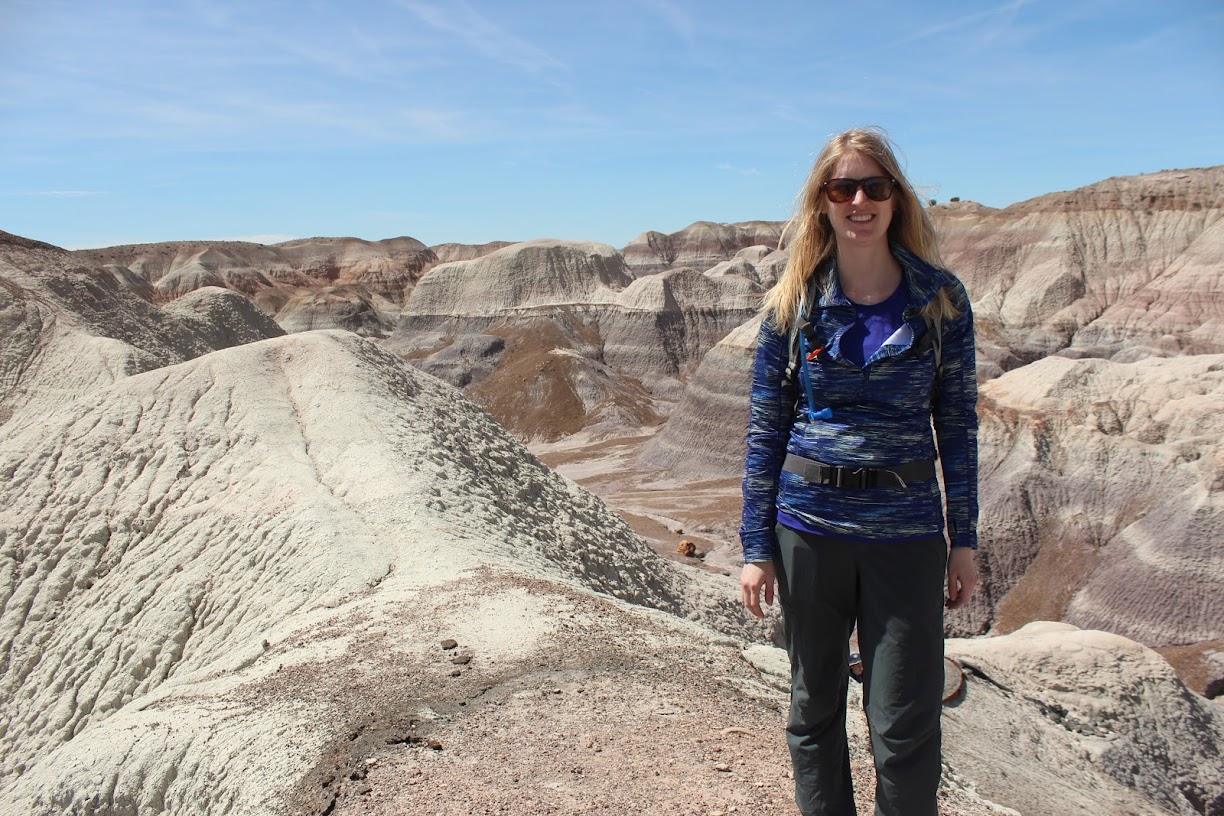 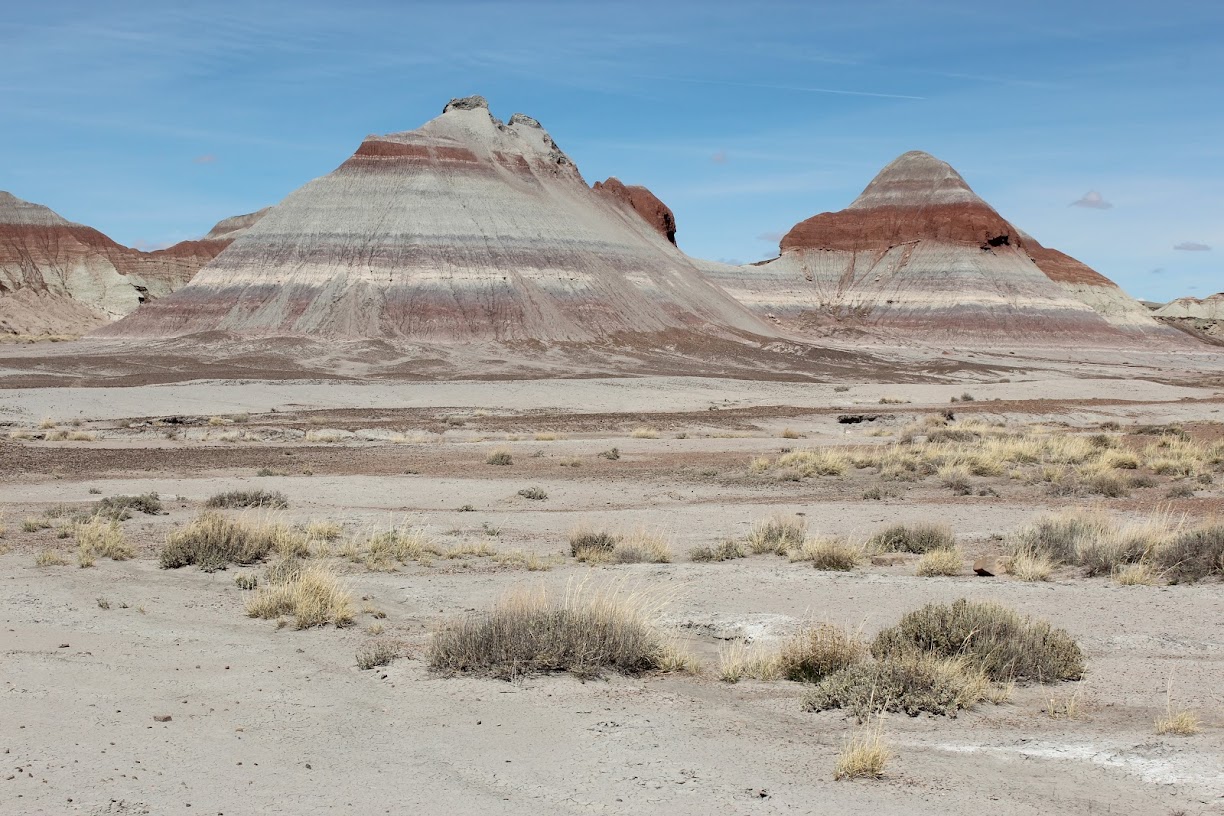 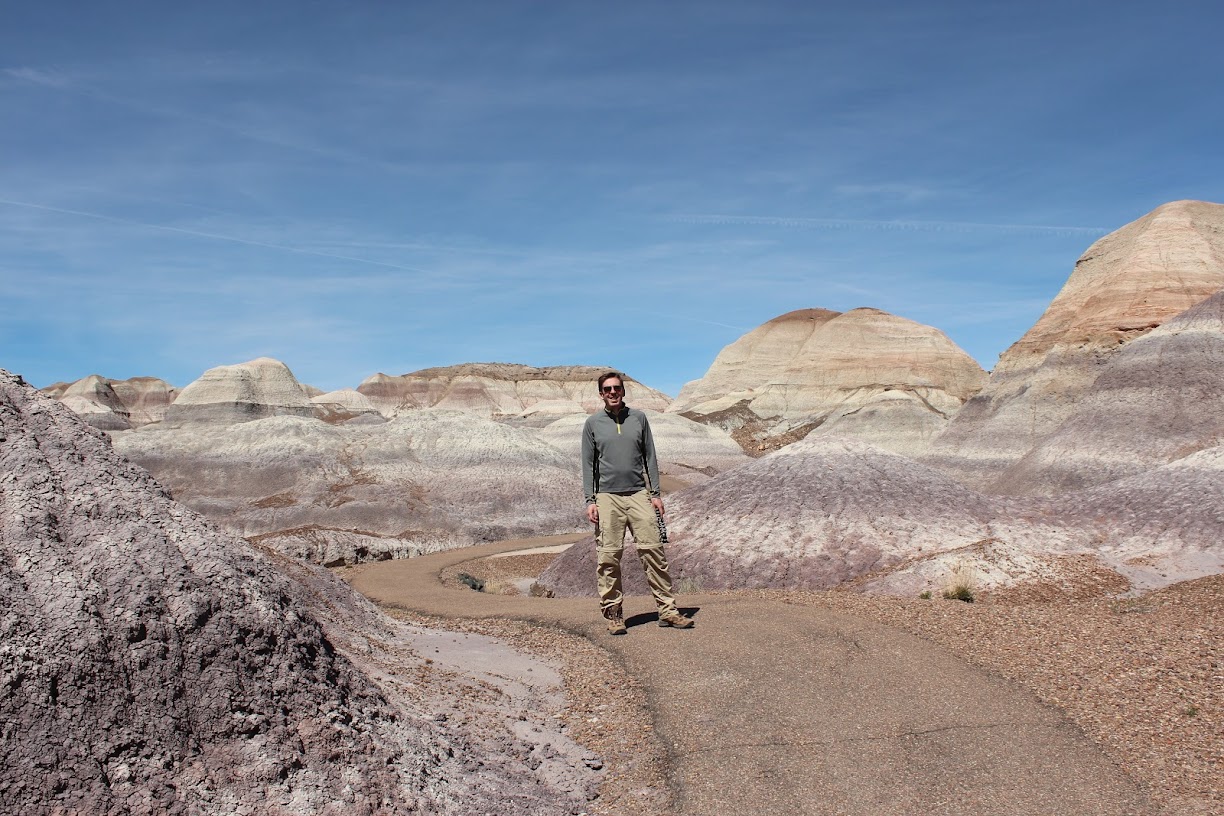 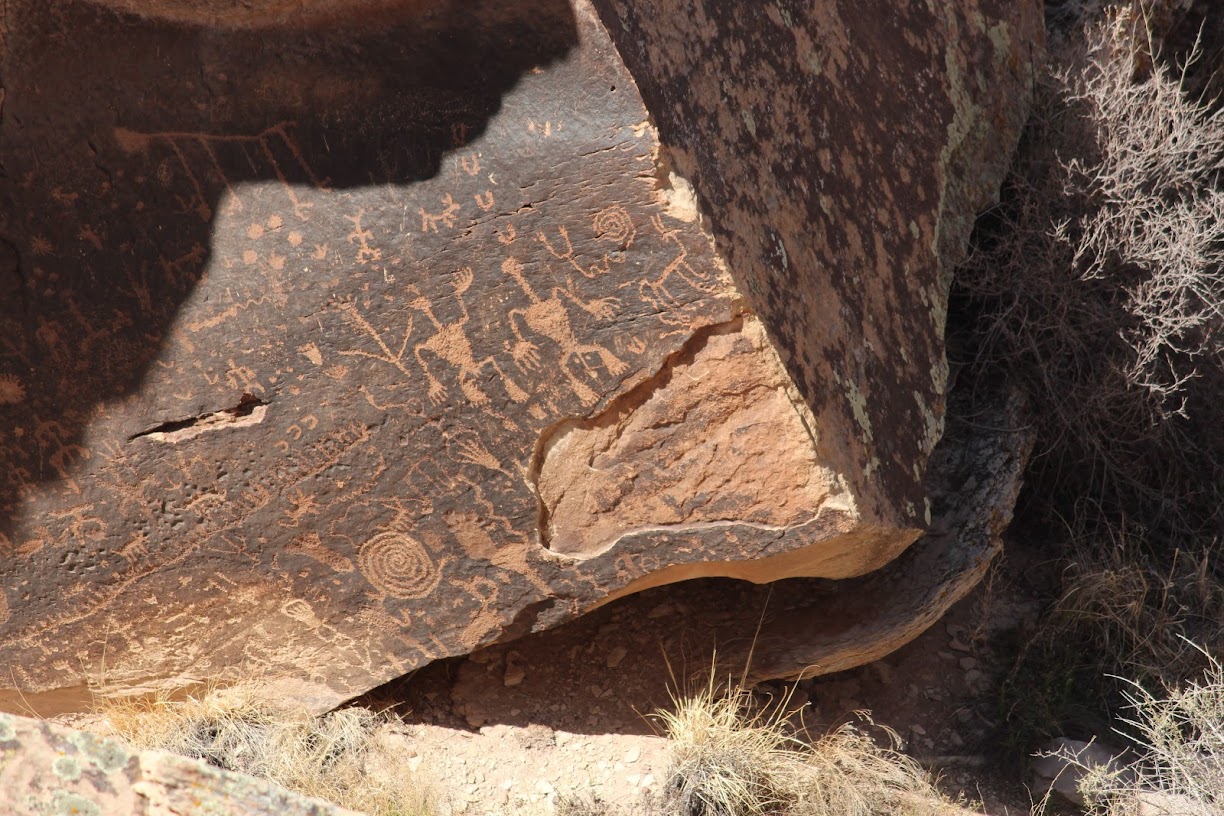