Part 2 of Marisa’s Winter Escape from the Sunshine State!

Sad to leave my travel partner behind, I flew into Berlin and dropped my bags off at Sunflower Hostel. I always recommend doing a walking (or bus) tour early in any trip to a new city. The Alternative Walking Tour group rounds up people at several hostels (including mine) and takes them to the starting point at Alexanderplatz, the tourist center of the city.

Aside from the miserable cold, the walking tour was very good. I had done a street art tour in London a few years back, but I still enjoyed doing this one and also met a few other solo travelers. Rudy, our Scottish guide, gave us the histories of Mitte and Kreuzberg (districts)  as well as of the West/East Berlin divide. We definitely stopped by sights that most people wouldn’t even realize had historic value if it weren’t for the guide.

The walking tour ended at YAAM – Young African Arts Market – where some of us ate dinner (domoda for me) before we walked along the famous East Side Gallery.

Conveniently, my hostel was nearby, so I warmed up again and added another layer of clothes before heading out one more time. Being an art museum fan, I took advantage of the “I Love Mondays” free admission at Deutsche Bank Kunsthalle, a Tate gallery. The gallery was displaying an exhibit on the work of Indian artist, Bhupen Khakhar.

I did my best to get up and get ready for the day, while not waking my bunkmates. Ate the 3 euro breakfast buffet at the hostel and then killed a little time snapping photos at Alexanderplatz.

Tripadviser and other sites warn you to get to Gesundbrunnen Bunker early in order to buy tickets before they sell out. In the winter though and a weekday at that, this wasn’t necessary. I took the Cold War Subways and Bunkers tour. Not going to lie, it was actually an overrated tour. I mean people rave about it online, but I was less impressed. The tour guides walk you through two fall-out shelters and explain how they theoretically wouldn’t save any lives let alone the 1% of the population that could fit in Berlin’s 16 or so bunkers. I did enjoy raising my hand when he asked for doctors and a few other professions that might be among the chosen 1% to be saved. And I liked that there was a crib in the infirmary, you know, in case someone gives birth underground in the bunker. Maybe if you visit, try the WW2 Dark Worlds tour instead? 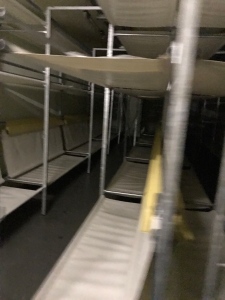 I ate lunch at a very yummy vegan restaurant called The Bowl. Then I headed out for more WW2 and Cold War landmarks. I walked around Checkpoint Charlie but didn’t pay for the museum. I did partake of the free admission to the Topography of Terror, a museum which tracks the rise and fall of Hitler. I was particularly intrigued by the stories of individual victims and villians; they cover which Nazi lieutenants were persecuted and which actually went on to live long productive lives.

After the Topography of Terrors, I traversed the Memorial to the Murdered Jews of Europe and passed through the Brandenburg Gate. I did not plan ahead enough to get tickets to Reichstag. Maybe next time? 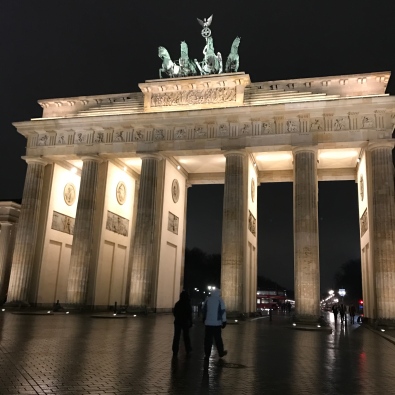 That evening, I met a friend of a friend for a drink at Bar Gagarin (named for Cold War cosmonaut Gagarin of Russia). Luckily, the Alternative tour group’s Anti-Pub Pub Crawl starts in the same neighborhood. Unluckily, the first bar is not easy to find! Luckily, I found two other tourists who were also looking for the crawl, so we wandered the neighborhood together. We never did find the bar. But we did find some fun! The three of us stopped in three pubs and formed our own little pub crawl. The last bar was Mein Haus am See whose reputation for cool has garnered the attention of tourists. Nevertheless, this 24-hour bar seemed to have a young, hip crowd. Our group of 3 grew to 5 – the more the merrier!

Given my late night, I had a late start to the morning. It was almost noon when I arrived at the Museum Berggruen. It was wonderful though! and I took many many photos! The museum is full of Picasso, Klee, Matisse, and currently Condo. I swear they have a sculpture of my two friends from last night! and a painting of one of the late additions to our group!

Across from Berggruen is another art museum: Sammlung Scharf-Gerstenberg. Although I was quite happy with the Berggruen, when would I ever be back to see this gallery, dedicated to the surrealists? So after a brief breather in the museum café, I toured it as well.

Next, I took the train back toward the center of the city. Knowing that Berlin Cathedral, or the Dome, closes at 6 pm, I went there first. I even climbed to the Dome walkway whose views I barely glimpsed – as I said, I don’t like heights – while skirting the Dome and hurrying back down into the cathedral. I’m sure the not-so vertically challenged would appreciate the view.

With that done, I went next door to the DDR museum. This museum is a hands-on museum dedicated to all things East Berlin, from the clothes and food to the propaganda and TV of the cold war.

Finally, I retraced my steps to the train station as an Irish pub was calling me name. (Actually, it was called Kilkenny.) After dinner, I walked around the neighborhood near my hostel a bit before showering and getting ready for the following day.

If yesterday was a lot of art with a little bit of church mixed in, then today was the inverse! My first stop was the Kaiser Wilhelm Memorial church. I wanted to see if the makeshift shrine to the recent terrorist attack victims was still intact.

The church, or rather churches I should say, are a sight to see in and of themselves. First, the original church with its WW2 scars: a damaged tower and blown-in rosette window. Then next door is the nondescript exterior to the new church with the cerulean interior. Serendipitously, an organ player was practicing as I walked among the aisles.

Back closer to the city center again, I wandered until I spotted the twin spires of St. Nicholas cathedral (Nikolaikirche). I paid for the audio guide and its helpful explanations of subtle details in the church architecture and decor. I also returned to St. Mary’s (Sankt Marienkirche) and entered it too.

A little aimless, I steered myself toward the Dome and just past it to the area known as Museum Island. More picturesque buildings. However, today I only went into the Alte (art) museum long enough to use the facilities – its classic art isn’t of much interest and the Neue (new) art museum hasn’t reopened yet (4 years to renovate?) – before wandering again in search of another spire. You see, I was interested to find out what church the gold dome that can be spotted up the river from the Dome belongs to. Following the river and my general sense of direction, I found it – Foundation New Synagogue – with a guard at the entrance. So I found my way into the restaurant, Hummus and Friends, next door instead. More posh than I expected, I treated myself to a glass of wine and a quinoa chick pea dish.

Next, I made a brief stop into yet another church – hey, Sophienkirche, is named for my patron saint and I never see her name anywhere! Also in this neighborhood is the Church of Punk! aka the Ramones Museum! I kid you not: I am now a lifetime member of the Ramones Museum. You can purchase a Berliner with your membership and walk amongst the memorabilia or simply lounge in the chairs up front and eavesdrop on a conversation about missing a train to Paris and sleeping the night in a car parked in Normandy.

Even after seeing all these churches and ‘churches’, it was still fairly early in the day. I tried to squeeze in the German History Museum. I don’t think I had enough time there though, or maybe I did. By this I mean that my friend of a friend (café Gagarin) swears its worthwhile but I was struggling to appreciate it. Would more time and more energy have made it more interesting? Even with the audio guide, I wasn’t a fan.

I left with the closing bells and gave the famous street unter den linden a stroll. It has opulent historic buildings and then opulent commercial ones (judging by the massive chandeliers and the sports cars in the windows). Turning up Friedrichstrasse, I followed a river of people into the massive bookstore. Now this is a place I can be entertained in for hours! There was even a two-story English bookshop within the greater bookshop. My reading-wish list is now full for the next year!

My final full day of vacation! What to do? I seriously thought about taking a day trip to Poland, and maybe in better weather this would have been a better idea. Instead I ended up choosing plan b, to spend the day in Potsdam. It was actually a very nice day trip and also a good deal cheaper and closer than Poland!

I don’t usually do hop-on, hop-off bus tours, but I’m so glad that I did here. They pick you up at the train station, drive around town (explaining where the Catholic church is, Little Holland, the French quarter, etc), as well as to several palaces on the outskirts of this military-turned-luxury town.

The first palace we actually got off the bus to see was Cecilienhof, the site of the Potsdam Conference at the conclusion of WW2. Next, the guide from the bus walks you around the exterior of Sanssouci. Last but not least, the bus also lets off at New Palace where even the servants lived like royalty! 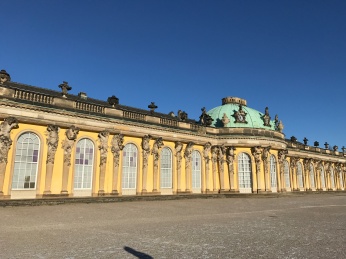 As it was wintertime, I chose to forgo the ruins and gardens near Sanssouci and leave the bus at the city center of Potsdam. There I window-shopped and had a quick lunch. The walk back to the train station wasn’t so bad and took me by their St. Nicholas church.

Back in Berlin, I decided to go to the movies and then have a quiet night packing for the return trip in the morning.

Public Transit – Definitely pay for a multi-day pass! I actually found that the 7-day pass was cheaper than the 5-day pass. Also, I wish I understood more about how the passes worked ahead of time: stamp your pass only once! and then carry it on you always (there are no machines scanning you in and out of the trains like in DC or most other cities). I thought I’d go the whole week without running into a ticket inspector (and thus would be telling you about the option to buy a 30-euro pass like me or to risk a 60-euro penalty for being caught ticketless) but I did run into one and I’m pretty sure he traumatized the young girls who he caught riding without tickets. So buy tickets! (I did not do the museum pass tickets, but there’s a combo transit/museum pass as well.)

Hostels – I stayed at Sunflower Hostel. What’s with the messed up key policy? Anyway, it seemed to have a young cool crowd, but that said I didn’t meet people and didn’t even give getting rejected from Berghain (literally a block away) a shot. Disappointing to leave Berlin without a Berghain-rejection story! 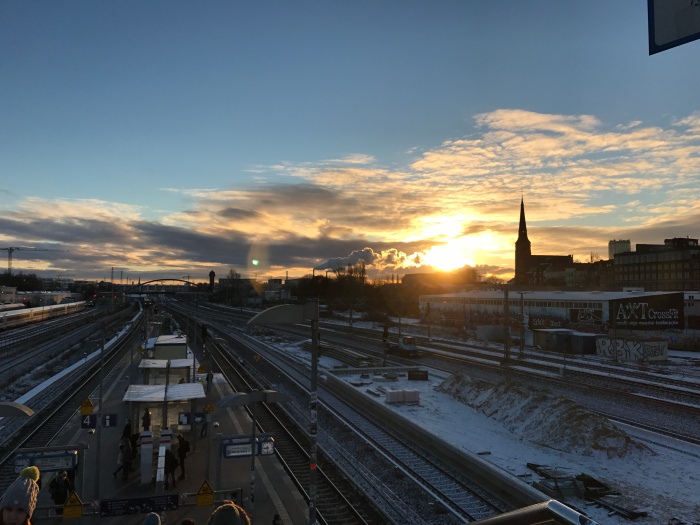