While Jon and I have been stationary since the end our year long travels, we are happy to have my sister Marisa (already a guest contributor) take up our travel mantle. Hopefully Jon and I will have some exciting trips coming soon, but until then enjoy Marisa’s adventures on the Iberian peninsula. – Alexis Herr 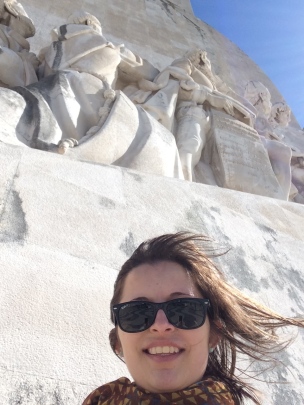 Planning for a two week trip:

First, why did I choose Lisbon? I managed to get two-weeks off of work in March, which is off season for most European destinations. So I chose southern Portugal and Spain in order to up my chances for good weather. That’s really the only direction I had, but when I learned about Las Fallas festival in Valencia, I rearranged the whole trip to try to make it there for La Cremà, the famous final night. (Stay tuned for my blog entry about Las Fallas!) The PERFECT March trip to Europe would include both La Cremà (March 19) and Sevilla Easter (March 27), but that didn’t work out with my time table.

Things that did work out pretty well for me on this trip were the choices of hostels, especially Lost Inn (Lisbon) and Sevilla Hostel One Centro (Sevilla)! I also managed a near perfect amount of money and luggage. Finally, while a few days were sacrificed to travel between cities in order to see as many places as possible, I picked a reasonable schedule.

To elaborate on the above, many people recommended AirBnb instead of hostels. Alexis, Jon, and I certainly lucked out and loved our Paris apartment à la AirBnb. However, I was traveling alone and knew from my London experience (2013) that hostels were a good way to meet other travelers. It was really important to me to find a social hostel with a balance of quiet in order to get sleep. Lost Inn and Hostel One Centro were the best because they each host free events every night that draw people together and facilitate going out at night, if you so choose (free Sangria every night at Lost Inn and free dinner! every night at Hostel One). I was less happy with Barcelona Central Garden; yes, it’s clean and a good location but also smaller and less social – so definitely stay there if you’re afraid of loud ‘party’ hostels. The Hat (Madrid) is also not for the solo traveler; it is a big hostel with a posh rooftop bar, but it books large groups including young children needing chaperones. Lastly, one additional bonus to hostels was that they don’t fill up in the off season. I stayed in 4 or 6 bed dorms exclusively, and my 4-bed female dorm with private bathroom in Sevilla was just me and another girl all 3 nights!

What did I pack? Using Alexis’ 30-liter backpack and a medium-sized purse I did just fine. Clothes: 2 pairs of skinny jeans, 7 pairs of underwear, 3 pairs of socks, 3 bras, 2 cute short-sleeved tops, 1 sweater, 1 tank top, 1 cardigan, 1 dress, pjs, light coat, scarf, flip-flops (for the shower), well-cushioned sandals, and boots. It was never warm enough for the dress, but the comfortable sandals gave my feet a much needed break after several days of walking in the boots. Also, paying the hostel to do my laundry overnight at the halfway point of the trip worth it! (thanks, BCG). I also took my iPhone, iPad, digital camera, chargers, socket converter, and a portable charger in case a socket wasn’t available. My padlock was only needed at one hostel (and even that one had rental locks), and my umbrella was only needed once as well. I also appreciated having paper copies of my itinerary (hostel info, train ticket, flight times) and wished that I have figured out digital, offline maps for each city ahead of time. Get Euros from the ATM at the airport when you arrive, and charge items whenever possible (most places accepted my Visa check card). Last but not least – you must bring ear plugs and eye shades, must!

Okay, that’s a lot of info. I will go more into airlines (both international and cheap discount domestics), using the train system in Spain, and public transit with each of the individual city blogs. Actually, that’s a good segway into discussing Lisbon!

I arrived in Lisbon too late in the morning to join a walking tour, but I was super happy with my decision to go to the Belém neighborhood. First, it may seem obvious but a walking tour on the first day in the city is a good way to see a lot in a relatively little amount of time. If you don’t go on your first day, then you run the risk of re-visiting places and sights you’ve already passed on your own. Belém is too far out of the way for the typical walking tour, so I maximized my ability to see as much as possible by going there. Secondly, I made friends with two other tourists – Warwick and Richard – at the tram stop. We were all a little unsure of the city but managed to stumble off at the right station and stumble around Belém together. I spotted Pastéis de Belém, a famous pastry shop, and the guys gave me the tip to check out the town of Sintra and especially Quinta da Regaleira. 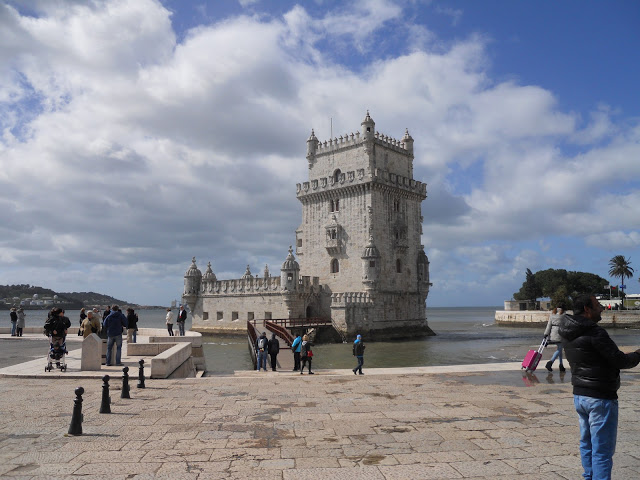 In addition to pastries, Belém has gardens, a riverside stroll, the Torre de Belém, and Padrão dos Descobrimentos. Unfortunately, my new friends had to leave for the next leg of their journey, so I literally marched on…and on and on. Okay, so this is where the advice about using public transportation comes from because getting lost in Lisbon’s numerous hills was fun until it wasn’t (in my travel journal I called it ‘Lost Hours in Lost Neighborhoods’ or ‘the forever trek back’). At long, long last, I made it to Estrela Basilica and its garden. 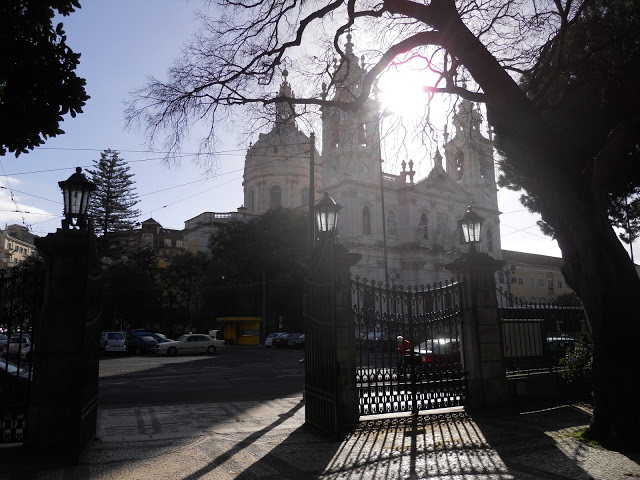 Back at the hostel, I actually napped! and woke up in perfect time to catch the nightly sangria event at Lost Inn. Lucky for me, the table of people chose English as the common language that the most people knew, and they happily moved over to make room for one more. I quickly felt a part of the group, which included Turks/Germans, Belgians, Dutch, a Canadian, and a Tasmanian. The eight of us went out to dinner afterward at a local restaurant; it was nothing fancy, but I was impressed by the appetizers – bread, cheese plate, squid salad. We shared two bottles of red wine and each ordered some variation of the same dish: white rice, french fries, and grilled meat. The bill came to 12€ each 😀

I can’t pretend to be an expert on the Lisboa nightlife, but our group grew in size and walked to Bairro Alto, the ‘upstairs’ (uphill) neighborhood of narrow streets packed with bars. We stayed until the bars closed at 2 AM, and those who were up for it relocated to the ‘downstairs’ nightclubs.

With my late night, I just barely made it to the Rossio Square for the free walking tour. The walking tour was really good; my only criticism is that the guide had done this so many times that he no longer delivered the jokes with any genuine humor. We started in Rossio Square where he gave the history of Portugal and Lisbon. Then we walked to the Figueira Square nearby to see the Doll Hospital. On our way toward S. Jorge castle, he showed us some street art and taught us about Fado music (Spain has Flamenco, Portugal has Fado). We learned about Lisbon’s famous festivals, its historic earthquake, and Graça, the Neighborhood of No Secrets. He ended at one of their city’s many scenic viewpoints.

“Hospital of Dolls” – Guess who the tour guide pulled up front to act the part of the little girl with the broken doll?? 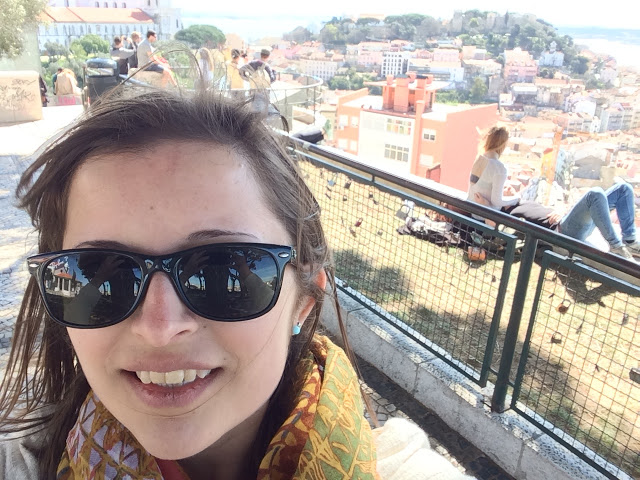 Lisbon’s “Our Lady of the Hill” viewpoint

I hurried off after the walking tour to the well-known flea market, Feira da Ladra, which is Tuesdays and Saturdays and is totally awesome! Between the jewelry, the art, the ceramic tiles, it was tough to settle on one thing, but corny as it sounds I chose a pre-Euro portugese coin so that I can carry Lisbon with me always. Also super cheap 😉

The flea market is near a few nice churches (hey, it’s only day 2, of course all churches seem beautiful to me!) and abuts the Alfama neighborhood. Alfama has the most charming streets and cafés! Definitely go there for a coffee or lunch! Past Alfama, I made my way to the José Saramago museum and then the large Praça do Comércio. Sunny weather really made the river sparkle, and you can walk right up to the waves from the praça and enjoy the fresh air. 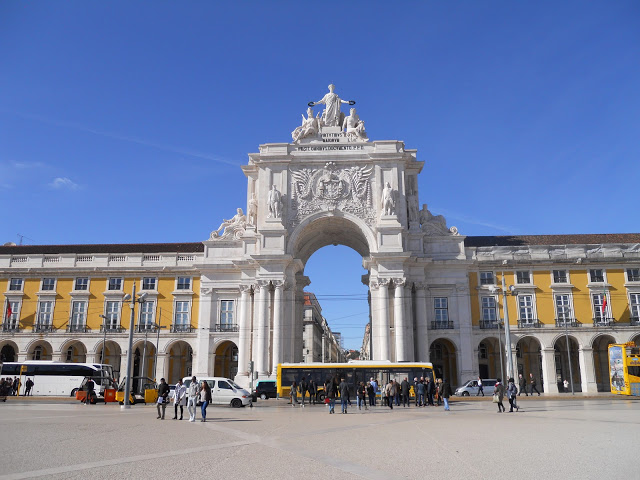 After a brief pitstop at the hostel, I decided to check out the Chiado Museu, conveniently located in the same neighborhood as my hostel. Online reviews for the museum were mixed, but I thought it was great! It would be the first of many museums that I visited on my trip. Many of the museums were a tad disappointing, especially the ones in Barcelona, but every museum at least had a handful of paintings which blew me away. And as you’ll read later, the most breathtaking museum was the last one of the trip – tease, tease.

My roommates in our 6-bed female dorm were nice but didn’t want to go out! So I watched the Real Madrid match with several of the guys I met the night before. After the game and our free Sangria, we walked to an Indian-Nepalese restaurant. It was a nice little spot, empty with friendly waiters. I especially enjoyed that my Moroccan companion had never eaten Indian food before. A lot of our drinking/partying group had left the city that day, and we were content to call it a night. 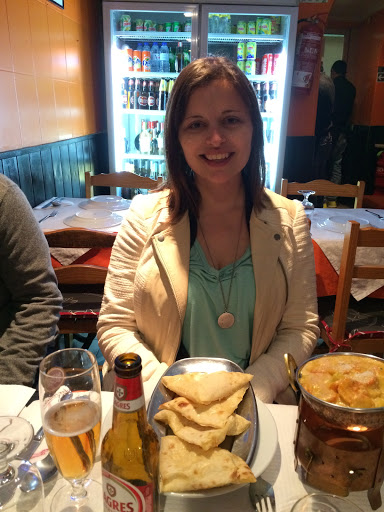 In my ignorance, figuring out the spelling of Sintra was a challenge. I was grateful to find Sean, my Tasmanian travel friend, at breakfast and also heading for Sintra. Sintra is basically a very tiny town with an abundance of castles. Why don’t we have any of these towns in America??

Yeah, so Sean and I were pretty clueless about where to go and what to see when we got there. Seriously, my whole vacation was basically a comedy of errors as I will probably reiterate over and over. We were also limited in time. Before you go to Sintra, know what you want to see there and about ticket prices plus deals or lack-there-of. We started at the National Palace, which like some of the museums I alluded to earlier, consists of pretty room pretty room BAM! gorgeous space! Do you follow me? 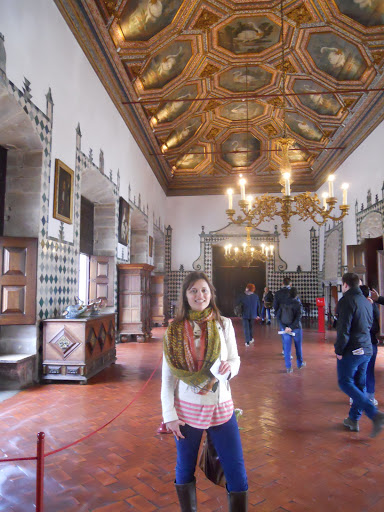 Next, we went to Pena Park and Palace. Sean and I must be masochists to try to walk instead of paying the second bus to take us the rest of the way from the park entrance to the castle entrance. As we climbed, an enchanting mist enveloped the castle. By the time we reached the castle itself, the fog was so thick that half the castle was hidden and the view beyond the castle was limited to the most immediate treeline, no more. 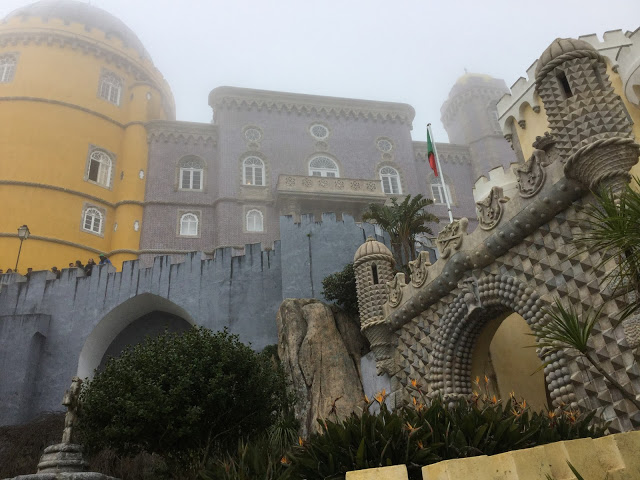 Back in town, we each selected a few pastries in lieu of a real lunch. Comedy of errors: Sean overdid the sweets, and I picked out a fishy appetizer. Oops. We took Warwick’s suggestion of Quinta da Regaleira and were super happy that we did! It is amazing. The architect, Manini, had a ton of fun making whimsical wells and waterfalls.

On the train back to Lisbon, a man coughed on me, and on the plane that night to Barcelona, I was also seated next to a cougher…a foreshadowing of what was to come at my next stop: Barcelona!

One thought on “Lisbon, Portugal”