Over the holidays we have been taking a hiatus from our travels to spend time with family, visit friends, and enjoy the holidays. During our break we are also re-grouping and planning the next portion of our trip; backpacking through southeast Asia, Australia, and New Zealand.

The biggest difference for us is that backpacking will require that we pack much lighter than we did while driving across the US. For those who haven’t seen it, our car was packed to the brim. We each had one suitcase of ‘city’ clothes and a separate hiking/camping wardrobe. We had a tent, camping stove, sleeping bags, sleeping pads, a cooler, cooking pots, gallons of water, first aid kits, climbing equipment, and so much more. We both admit we over-packed clothes for the US road trip, but most of our gear got used. 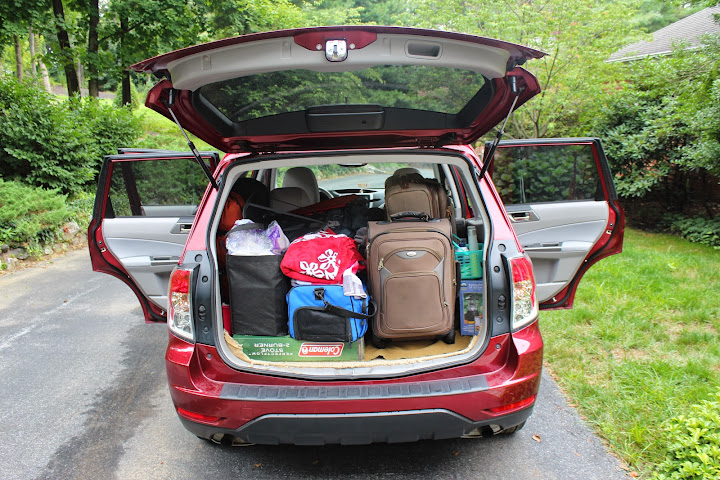 Packed for the start of our US roadtrip

For part II, we will be backpacking, sleeping in hostels, and without a car. This means we will be packing as light as possible (a big challenge for us). The ultimate goal is to bring carry-on only luggage so we can breeze through the airports, skipping baggage claim (and reducing the chance of losing our stuff). We used the holiday season as a chance to upgrade our gear, buy some items we realized we missed on the US road trip, and purchase backpacking friendly gear.

Jon is our photographer while traveling and we purchased a nice DSLR camera a few years ago for this purpose. We have debated for weeks now on whether we should even bring the DSLR camera with us abroad. It is bulky, heavy, and valuable. However, it has already survived a trip hiking the Inca Trail (one day I will have Jon write a blog about that) and why bother owning the camera if we aren’t going to use it. The quality of the pictures are much higher than the iPhone’s or any other point and shoot camera, so our big trip abroad wouldn’t be documented as well without it.

Without looking for it, I stumbled onto a smaller camera bag and purchased it as a Christmas gift for Jon. The smaller bag should offer a similar amount of protection but is about a third of the size of his current camera bag making it less bulky and easier to pack or to carry on its own. 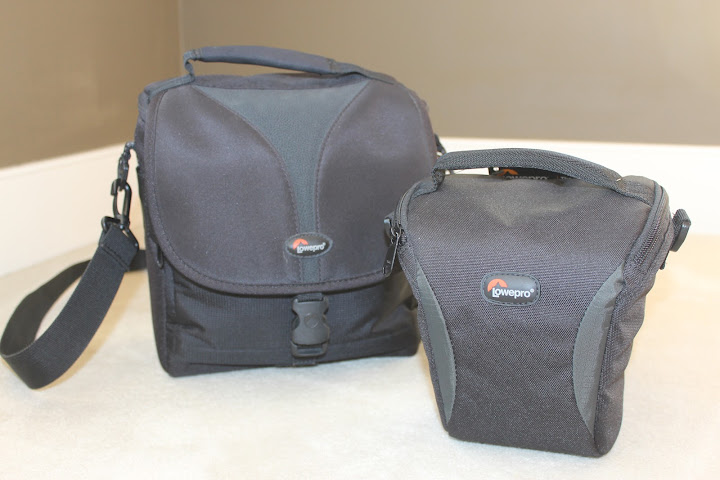 A new, smaller camera bag (right) next to our old bag (left)

Last year we purchased a tripod for our DSLR. Although we have no plans to bring our tripod abroad, or to purchase a smaller, travel-sized tripod, a wireless shutter control has been on the wish list for a while. In national parks, we had some amazing views of stars, dusk, caves, and other low light scenes which require the shutter be open for an extended amount of time. While having the tripod helps, there was still too much movement of the camera caused by a human pushing the shutter button. The remote shutter control should allow the camera on a tripod to remain still while taking a long exposure. (Depending on our usage, you can use the timer feature on the camera to take a hands free short exposure picture). 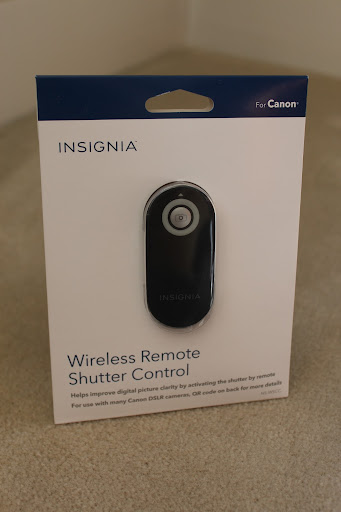 I asked Jon for a more sporty travel purse than my current purse. I suggested it be cross-body style but left it up to Jon to decide on what to buy. As always, he did a fantastic job finding me a present and I couldn’t be happier with his choice.

The travel purse he chose is stylish (I love the little carabiner detail), lightweight, heavy duty, and anti-thief. Being anti-theft means that the purse includes several security features: 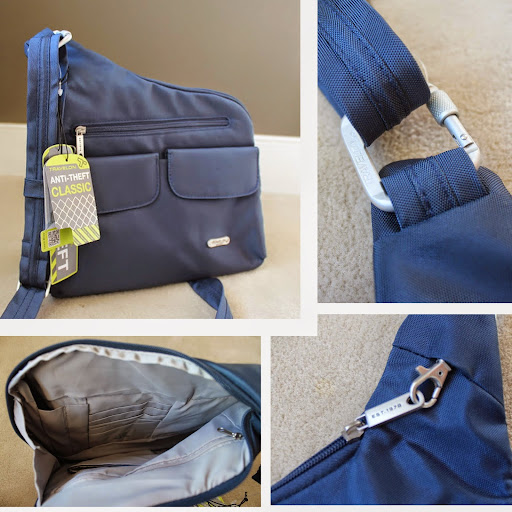 While I’m carrying my purse, Jon also wanted a dedicated daypack for his camera, water, and other necessities when we are able to leave our backpacks behind. In addition to holding our gear, we wanted this pack to be lightweight and small enough to carry folded in our backpacks while not in use. We went to REI with the intention of of buying a Flash pack. The REI Flash is very well reviewed and loved by its owners. It is a upgraded stuff sack that even the store employee uses for the purpose we wanted. However, while browsing the rest of the store we stumbled on the REI Stuff Travel Daypack.

We ultimately chose the Stuff Daypack (22 liters) for a few reasons. The biggest reason for us, was that the stuff sack had a nicer lid which covered the front and would protect from water and theft, whereas the Flash 18 simply had a draw string.The Flash 22 does have a lid, but the pack itself is made from a rigid material which would not fold well into our larger packs. The Stuff is designed to fit into its own pocket for travel and its more flexible, fold-able material made it desirable. 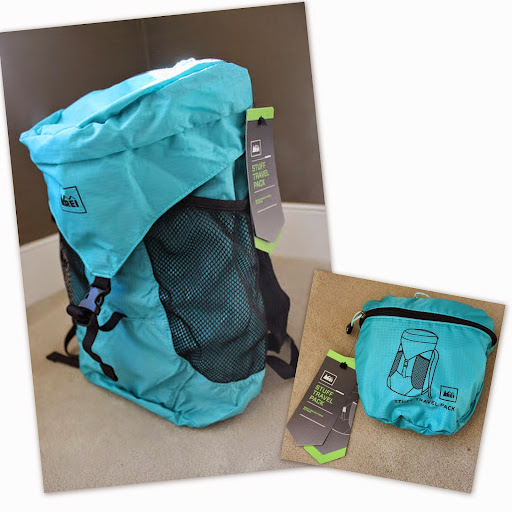 For Christmas, we both bought and exchanged packing cubes. We have not used packing cubes in the past, and while there is a heated debate on their usefulness while backpacking, it seems that everyone does agree that Eagle Creek is the best brand. People who use packing cubes absolutely love them and seem to refuse to return to traveling without them. People that don’t use them complain that the cubes take up more space in a pack than being able to cram clothes into every nook and cranny. For me, the biggest benefit of owning packing cubes will be having a dedicated ‘dirty clothes’ bag in my backpack to keep them separate from the clean ones. 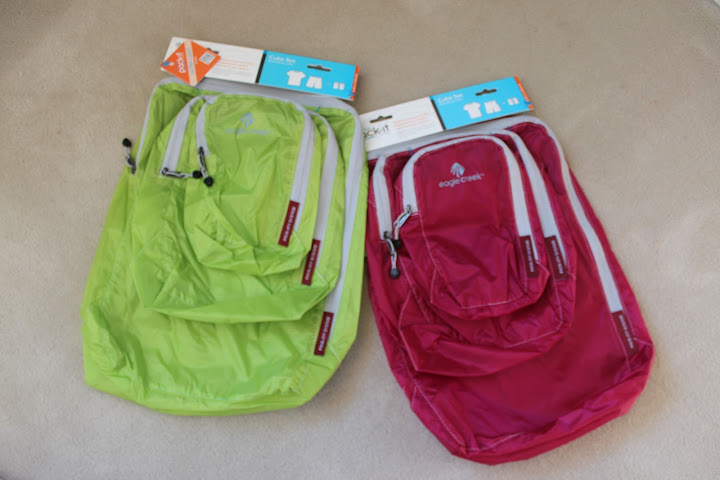 Having printed travel guides while abroad may be important because we do not know how reliable internet connection to other resources might be. However, one problem with printed books is their weight and the fact that we would need multiple books while traveling to different regions. While we can’t solve that problem now, we did dig up a few old travel guides from past trips and our friends while we were home for the holidays. We also were gifted a lovely book of popular hikes around the world from Jon’s brother.

Going forward we do plan to purchase a ‘Southeast Asia’ book which will encompass many of the countries in the region we plan to be in for the next 2 months. Lonely Planet has always been highly reviewed and considered one of the best guides aimed towards backpacking. 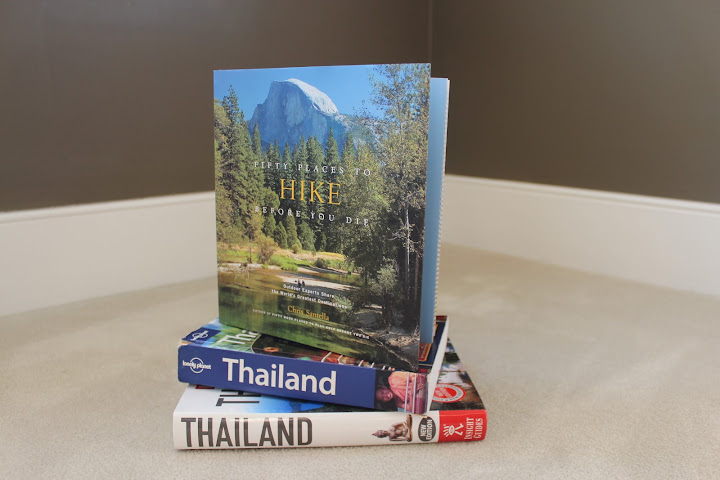 Jon decided to ditch his bulky wallet and try to slim down. Traveling aboard we won’t need any of our store loyalty cards, supermarket club cards, and half of the other junk we currently have in our wallets. We also wanted to make ourselves less of a target by not having an obvious large wallet and being able to store it in the front pocket.

After heavy use it was finally time to replace my hiking pants which had become faded and shrunken. Lightweight long pants are a must for traveling around Southeast Asia and my new pants are also a thinner materiel than the old pair. Most hiking pants come with some convertibility options to change them easily into capri pants or shorts. I prefer the roll-up capri pants because I find the zippers in zip-off pants to be bulky. This time I also chose a less sporty style so they would look like regular pants when I wasn’t on the hiking trail.

Like the packing cubes, this purchase was to make organization easier while backpacking and staying in hostels. Features we look for include a hook so the kit can be hung from a bed frame or shower rod in hostels where there isn’t much bathroom space. 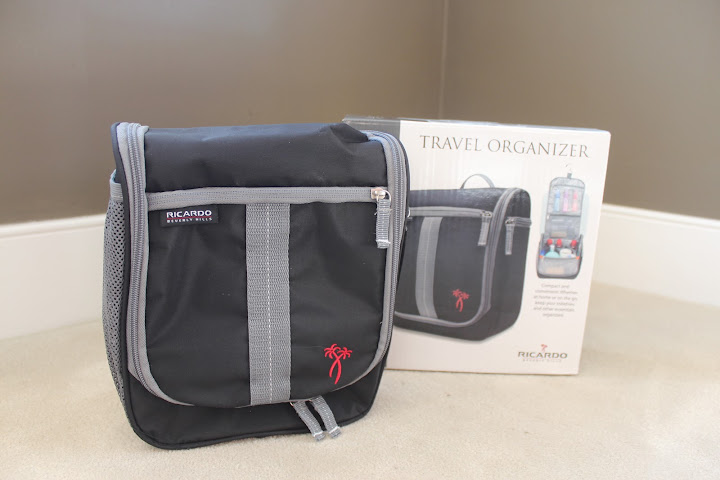 This was a nice surprise gift from my sister-in-law. It is very stylish (check out her Brazilian fashion blog or her post about fashionable cosmetic bags) and large enough to hold full size bottles of bath products. The square shape is also great for packing into my suitcase. I probably won’t take this on our backpacking trip, and will instead keep it nice for future travel. 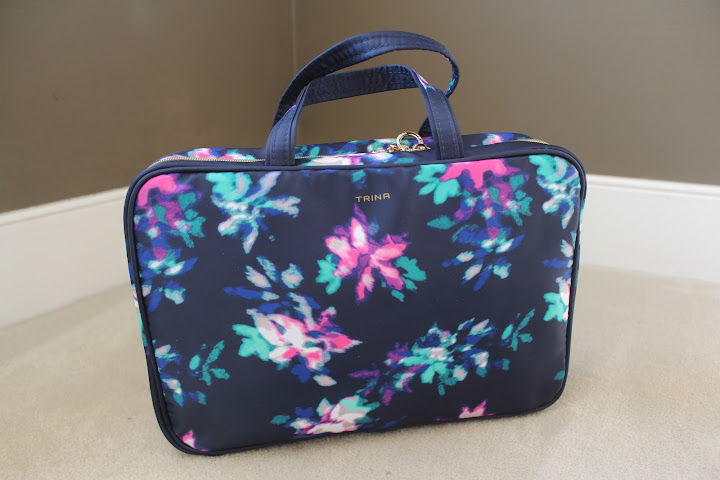