Our first destination in Colorado was Ouray, which was recommended to us by a friend in Denver who we would be seeing later in the week. Ouray bills itself as ‘The Switzerland of America‘. What we found in Ouray is a quaint mountain town. The buildings on main street retain a lot of historic charm and the views of the surrounding mountains are great.

Ouray is known mostly for its hot springs. The municipal pool ($12) in Ouray is fed from the springs and has several areas of varying temperatures as well as lap lanes. When we arrived at our hotel, the St. Elmo Hotel, we were told about the Orvis Hot Springs as an alternative. Orvis Hot Springs ($16) is privately owned and is made to look like natural pools instead of the concrete walled municipal pool. Also, kids are only allowed in the one indoor pool at Orvis. We decided that Orvis felt more to our liking and paid the few extra bucks to go there. Orvis was nice, in November it wasn’t very crowded, and at times we had some of the smaller pools to ourselves. More than anything we found the water was HOT and after just a few minutes we’d have to get out of the water into the November air to cool back down to a comfortable level. 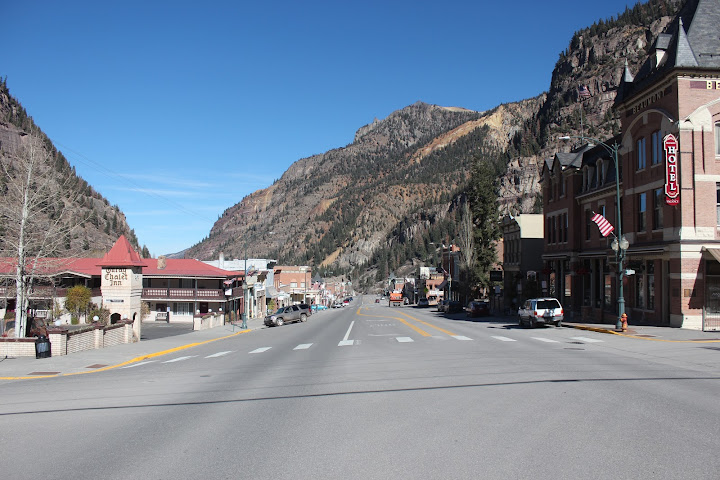 When we got back to the St. Elmo Hotel, it was time for the manager’s wine and cheese hour. The St. Elmo Hotel has the feel of a bed and breakfast more than that of a hotel. At the wine and cheese hour we found out that we were the only guests there, but the room was already lively with laughter from the owner/manager, staff, and chef from the adjacent restaurant. We joined them and had a great time as they gave us travel suggestions and joked around. In was very welcoming and the kind of conversation you hope to have with the locals when you are traveling. After too much wine we ate at The Bon Ton which is attached to the hotel; it was the closest restaurant, the chef was very nice at the happy hour, and the food sounded good. The Bon Ton is an Italian restaurant and we really enjoyed our food. The meal started out with very good bread and herb butter, and just got better and better. I had crab and artichoke ravioli and Jon had pesto angel hair with scallops. I think the scallops were some of the best I’ve had. 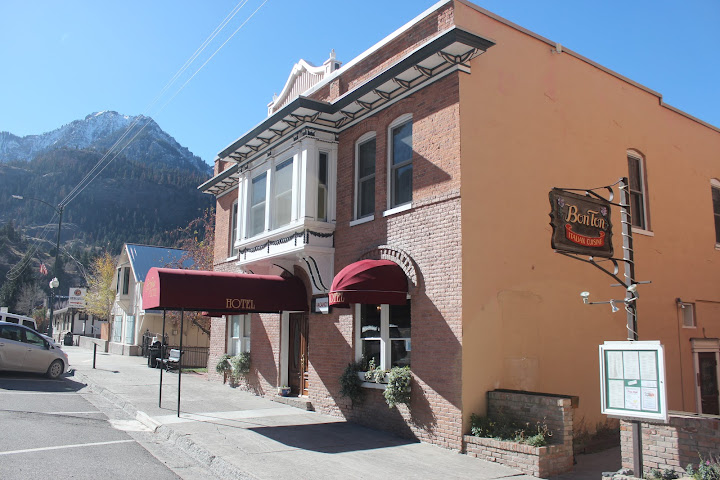 The next morning we had a nice breakfast at the hotel, which was included with our stay. The large variety of fresh cut fruit and the homemade quiche where a nice change from the continental breakfasts we had gotten used to eating.

After breakfast we checked out and walked to Box Canyon Falls, the other main attraction of Ouray. Box Canyon Falls is a large and very powerful waterfall in a very deep narrow canyon. Being the off season we didn’t have to pay the normal $4 entrance fee. The park is maintained by the town, and features a series of walk ways through the canyon to see the falls. We are told that in the winter the park is sprayed with water and freezes into a very popular ice-climbing park. 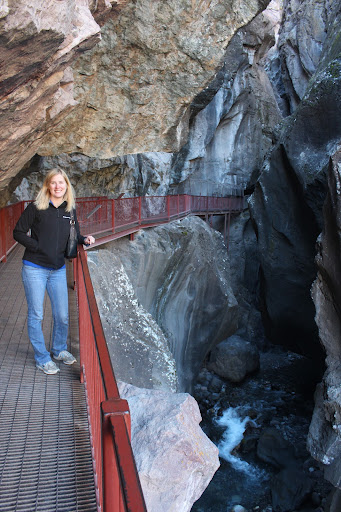 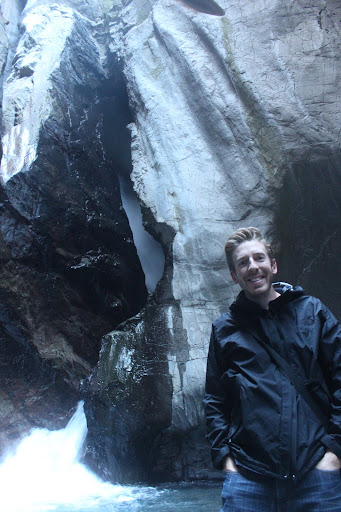 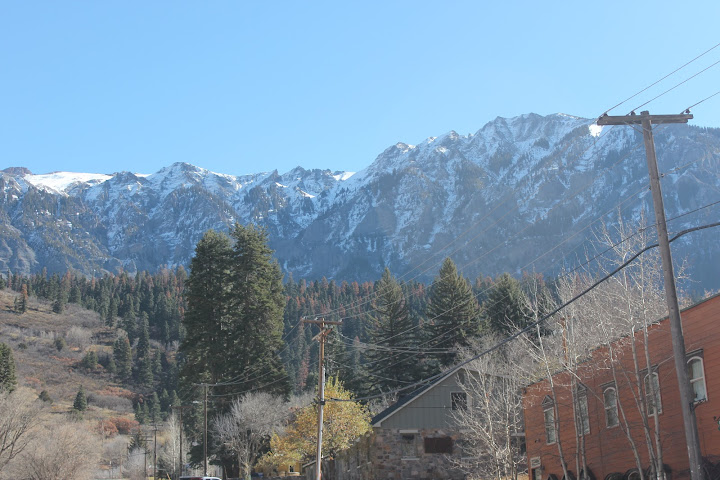 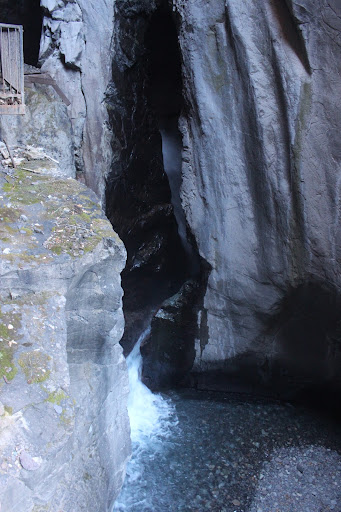 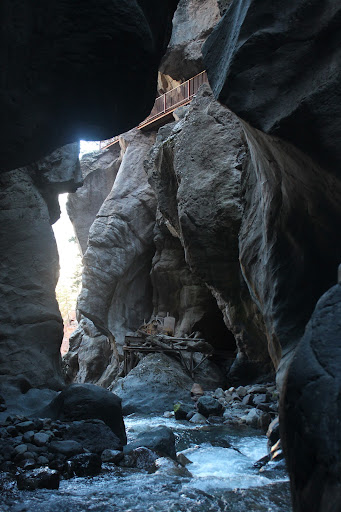 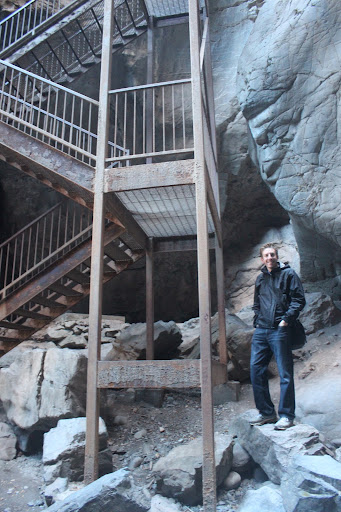 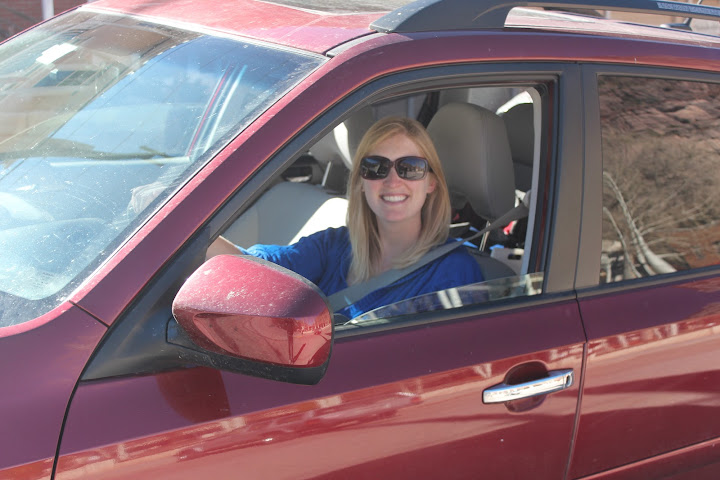