Canyonlands National Park is where the Colorado and Green rivers merge together. Of the parks we’ve been to, Canyonlands is one of the least accessible unless you plan to explore it by ATV, mountain bike, or long backcountry trips. The park is divided into three distinct areas; Island in the Sky, The Needles, and The Maze. 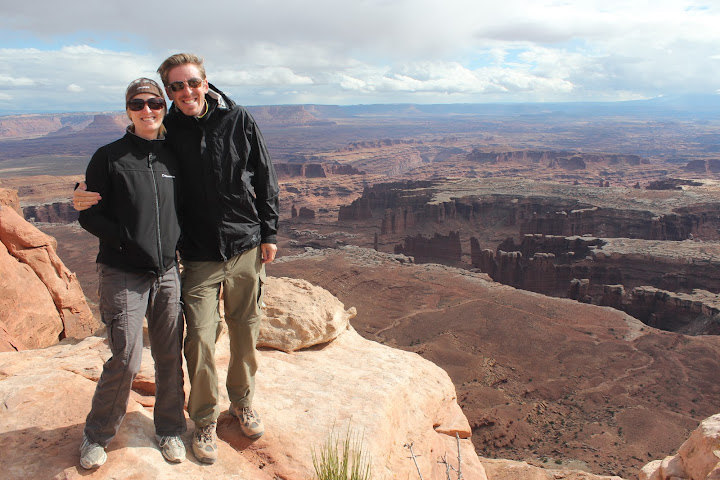 On our first day in Canyonlands National Park, we went to Island in the Sky, which is the closest park area to Moab where we were staying. Being November, it was cold and cloudy in the park (not how you picture the desert). We could see scattered showers in the distance, but luckily we never got rained on. We stopped first at the visitor’s center. Our guide book had us drive as far as the road goes and work our way across Island in the Sky, south to north. The first stop was Grandview Overlook. Grandview faces the center of the park where the rivers converge. Directly below Grandview is Monument Valley, a canyon with tall rock spires. From Grandview you can also see parts of Rim Road, one of the 4-wheel drive roads through the park. We did a quick hike along the cliffs at Grandview taking photos of the landscapes. 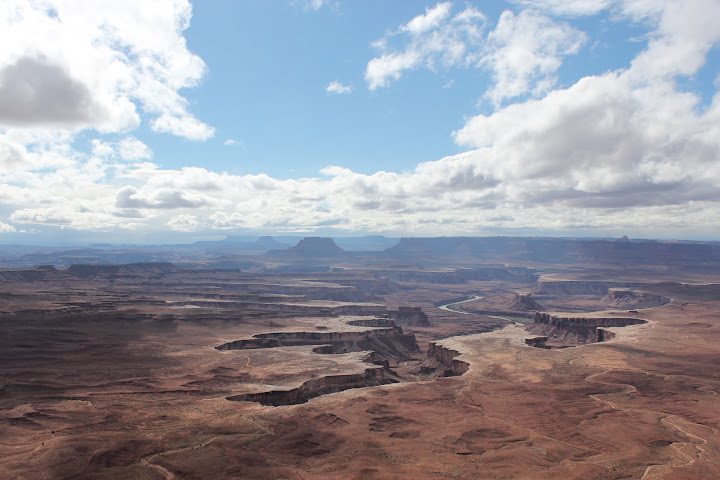 Driving north from Grandview we stopped briefly at some other view points such as Orange Cliffs. Our first hike of the day was Upheaval Dome. Upheaval Dome is a crater with concentric stone circles in it. Currently, it is not known how it was formed, but there are two prevailing theories; a meteor or an upheaved salt dome beneath the surface. 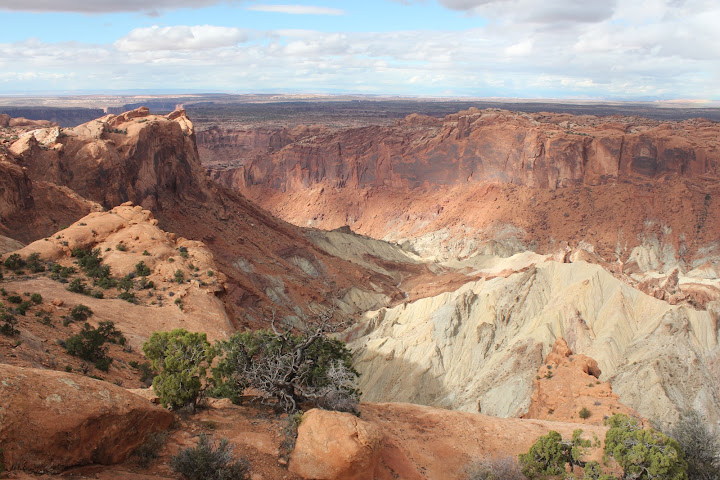 The other hike we did in Island in the Sky was the Mesa Arch hike. A 0.6 mile loop takes you to Mesa Arch, one of the most recognizable rock formations in the park. The best part of Mesa Arch was the view if frames of the cliffs across the canyon. 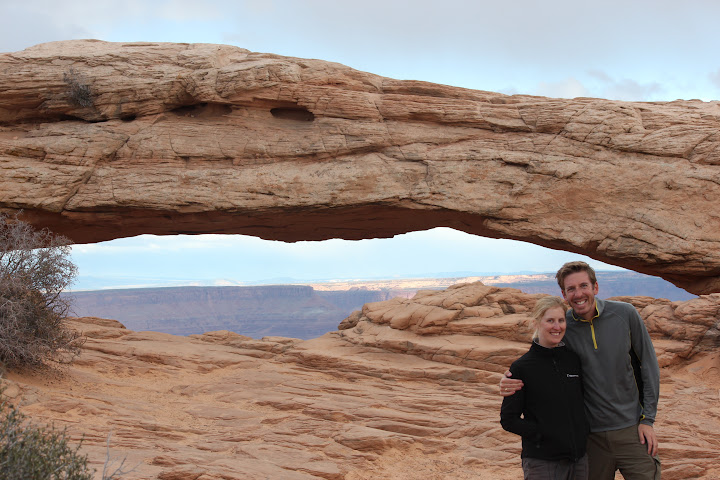 For dinner we went to Buck’s Grill House. Buck’s had great reviews on Yelp and might be one of the nicer restaurants in town. We sat at the bar so we could watch the Steelers game. I had the buffalo meatloaf (which has been featured on food network) and Jon had elk stew. Both of our meals were fabulous and really hit the spot after a cold day hiking. For our second day in Canyonlands, we drove to The Needles. The Needles is in the southeastern part of the park and was about a 2 hour drive from Moab. The Needles visitor’s center was much nicer than the one we saw our first day, so we stayed around and watched a quick film about the park. The Needles has more hiking loops than the other areas of the parks, but we were surprised to find how long the hikes are and with daylight savings making it dark earlier, we didn’t think we had time for one. In particular our guide book recommends a 5.0 mile hike to the river’s Convergence, but when we found out it was 5.0 miles one way, we knew we couldn’t fit it in. Instead we took the visitor’s center’s advice and we hiked the Cave Springs Trail. The Caves Spring Trail was 0.6 miles long and walked past rock overhangs that housed at different times cowboys and Native Americans who left pictographs on the walls. The hike also climbed two ladders and walked along the top of the rock formations. 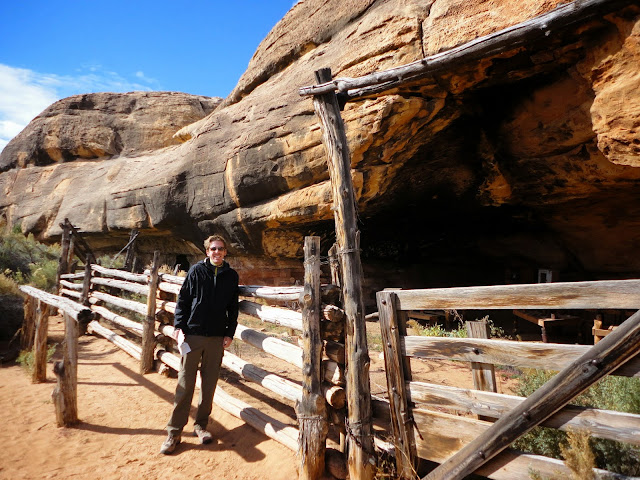 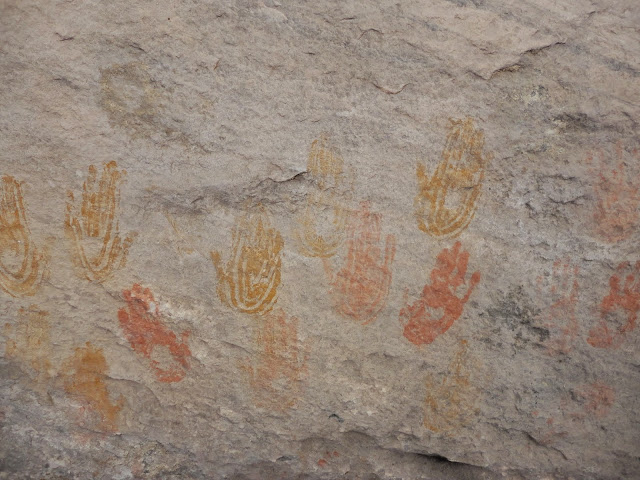 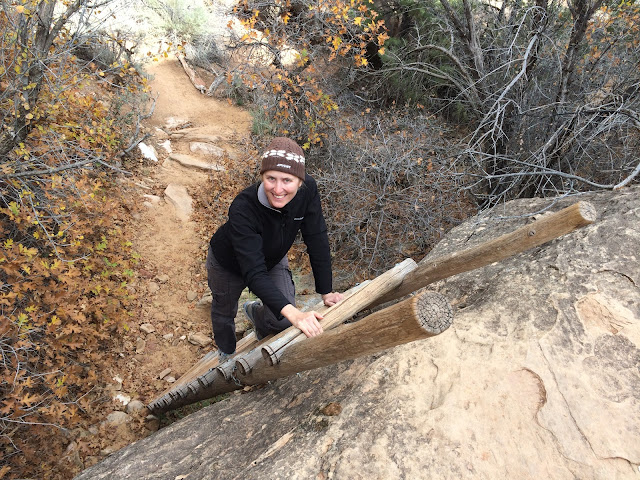 After a quick stop at Big Spring Canyon Overlook, we did our second hike of the day. A 2.5 mile loop called Slickrock, which has 4 viewpoints overlooking various canyons. 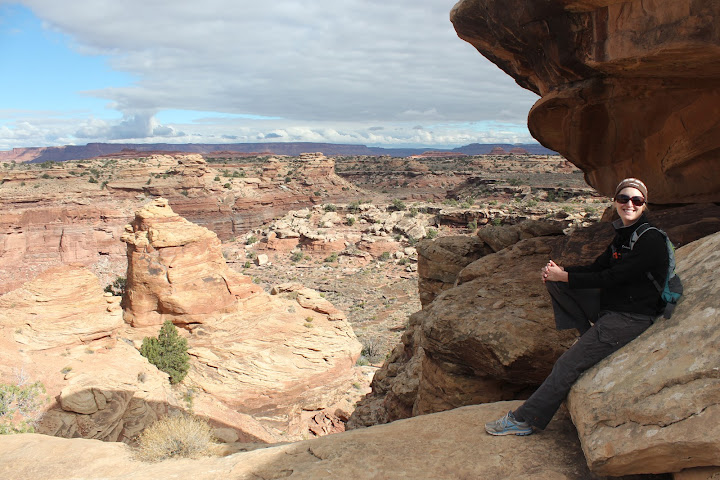 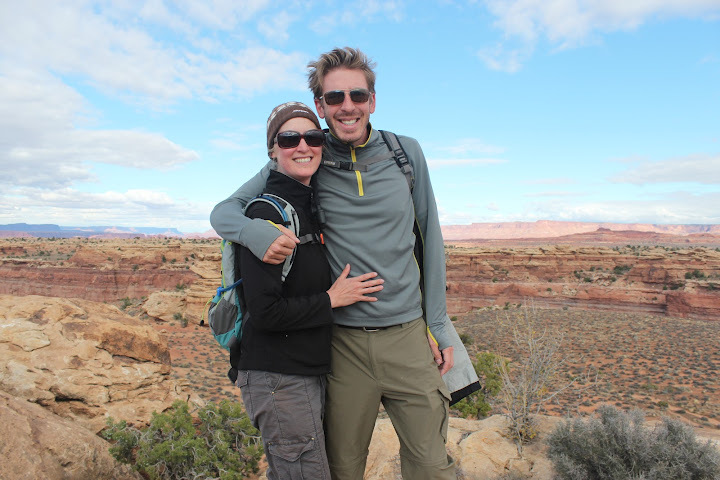 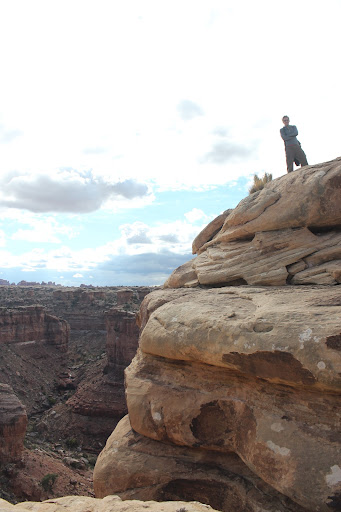 Before leaving the park we drove to Elephant’s Hill on 3 miles of unpaved roads. We were hoping for a better view of the Needles, but couldn’t see much without walking far on the trails which start there.  We had a picnic lunch there and then left the park. We went to Miguel’s Baja Grill for dinner, mostly because I overheard someone at the hotel recommend it. Most of the seating is in an outdoor space converted with a canopy and space heaters. The next day, for the first time all trip, we decided we were tired of the hotel continental breakfast so we went out to breakfast at Love Muffin Cafe. 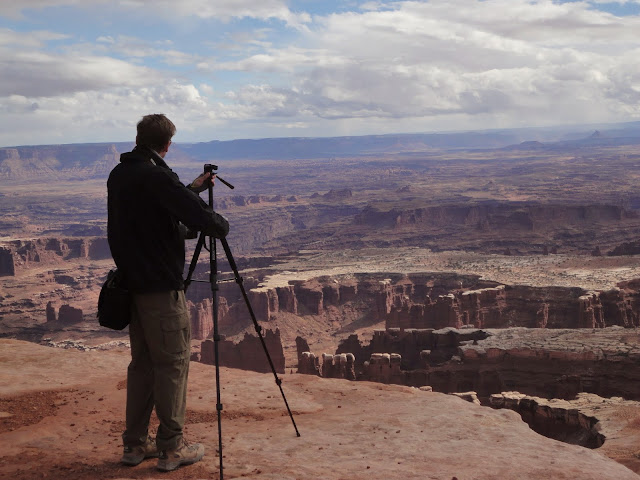 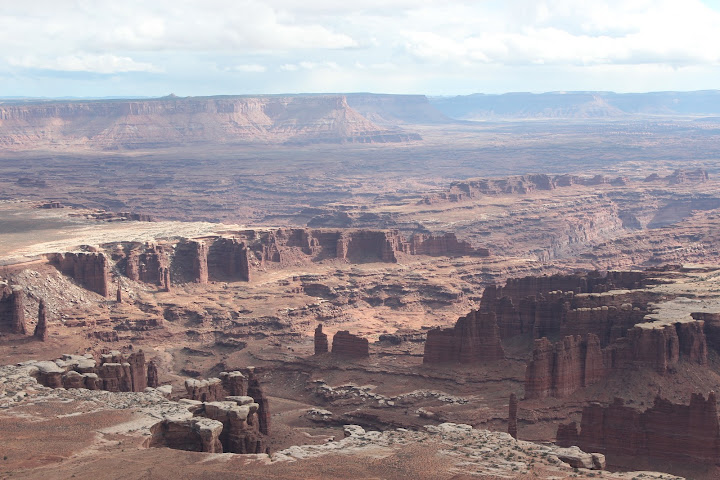 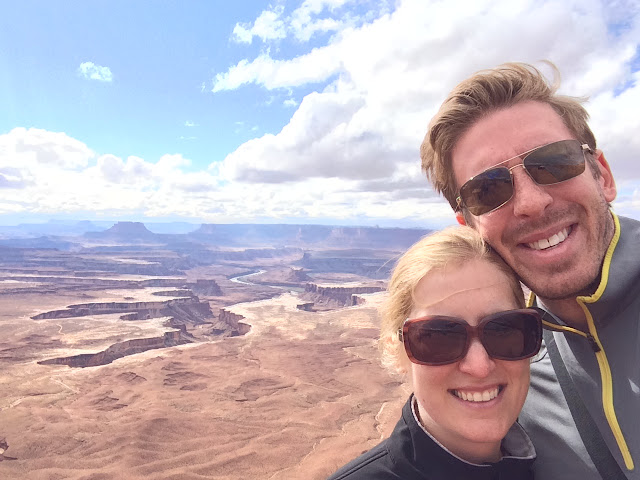 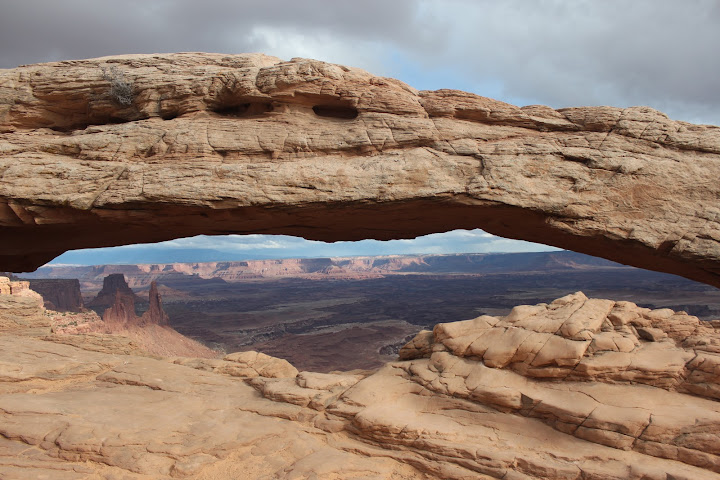 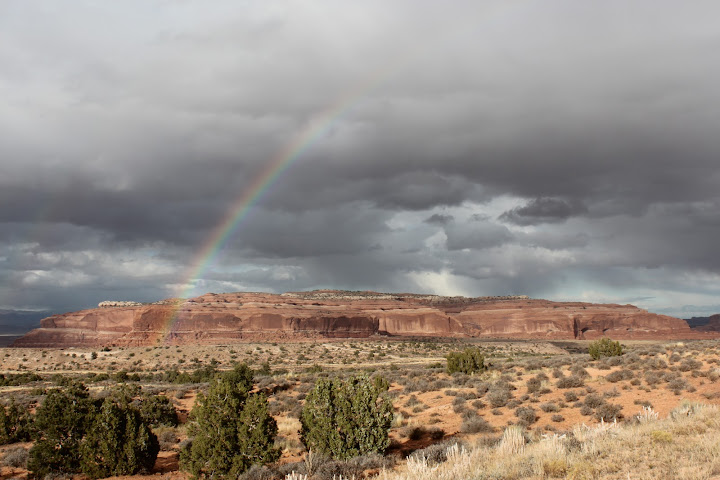 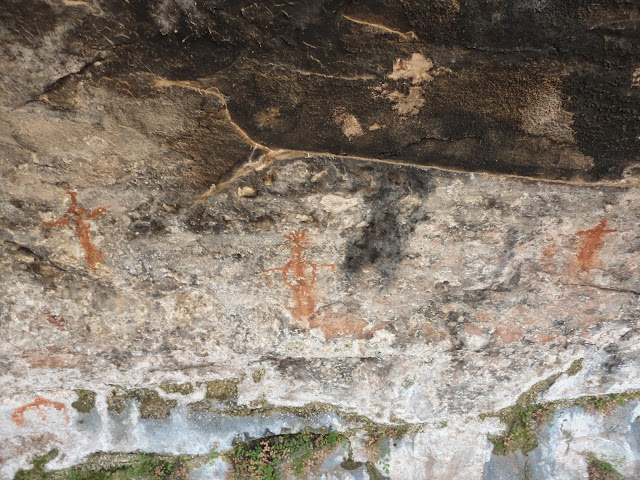 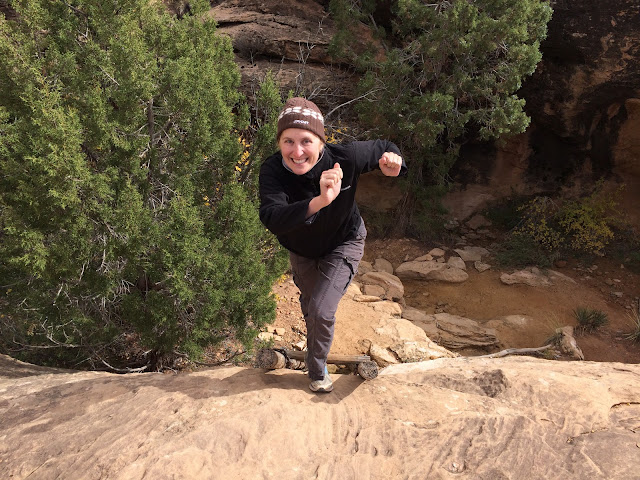 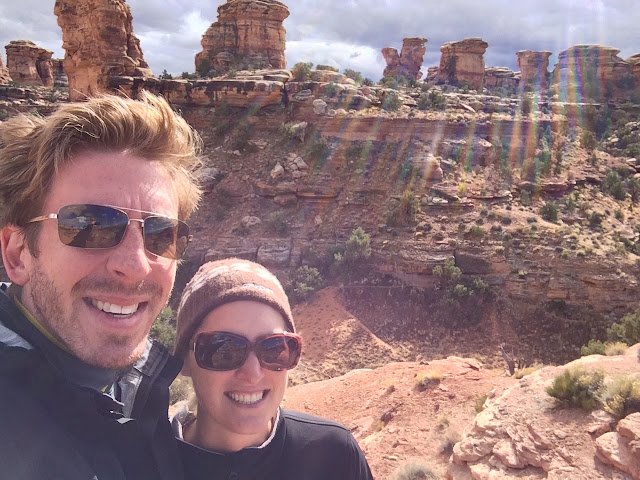 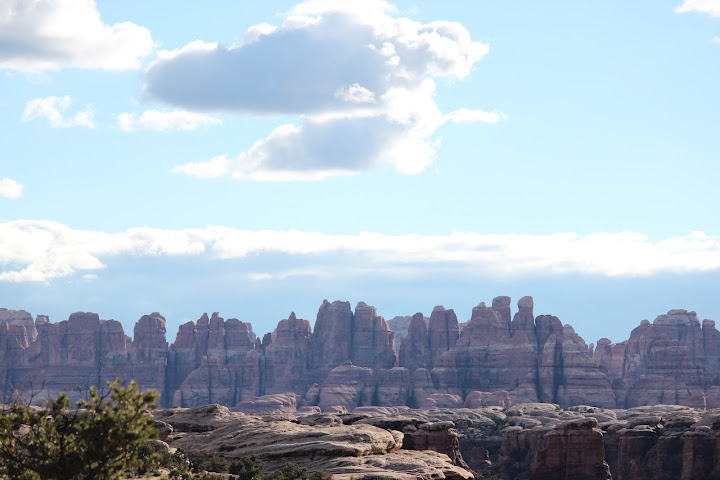 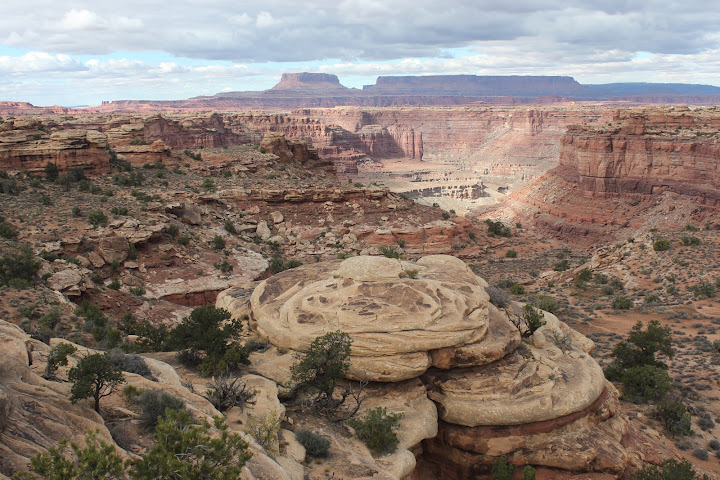 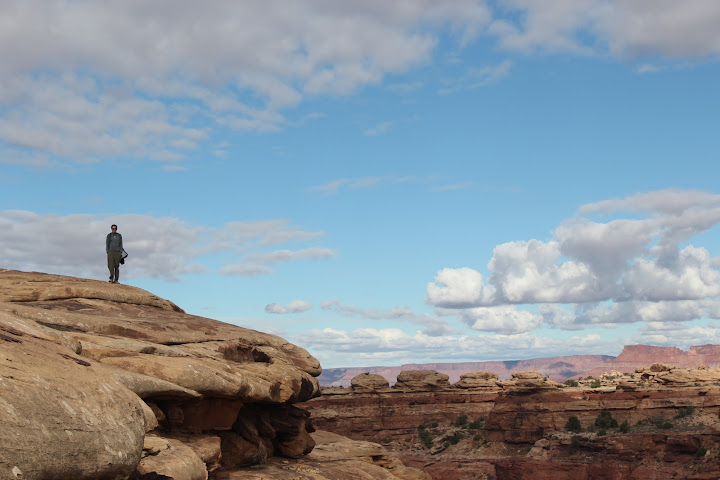 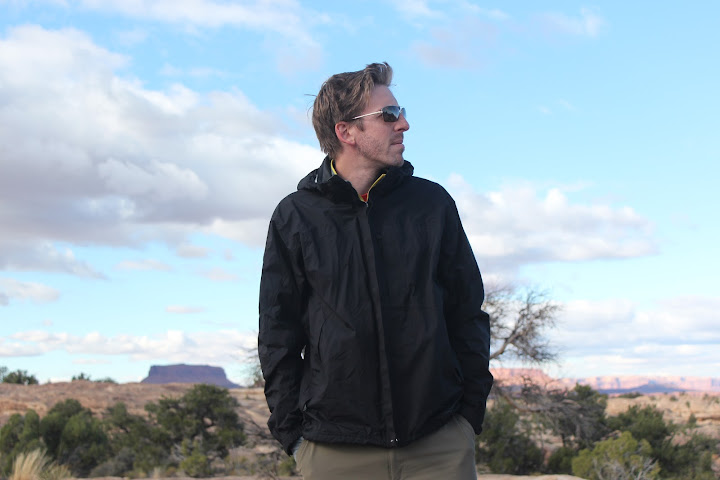 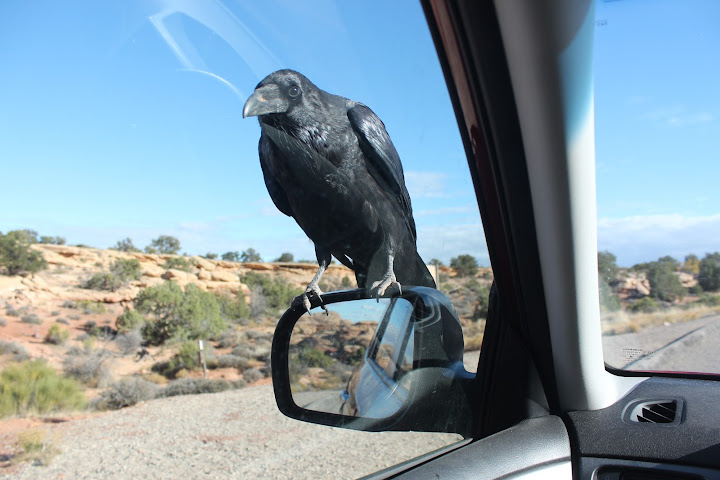