Retro Trip post: In March 2011 Jon and I were lucky enough to travel to Asia for the first time. And we were even luckier that we got to spend the trip celebrating a wedding with friends in Thailand and then visiting our friends Travis and Diana in Taipei, Taiwan. 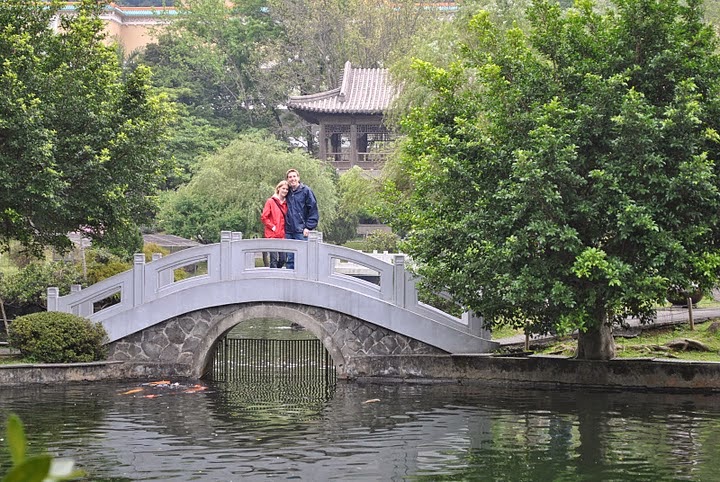 Taipei is a large city which has become an important business center in Asia. The result is that Taipei has a wonderful mix of cultures. It is a little more westernized than other Asian cities, and has many different cuisines to eat. Like many of the trips we go on, trying local and well known foods throughout Taipei was a highlight our trip (and it helps when your friends know all the best places).

We few to Taipei from Bangkok on Air Asia. Air Asia was our least favorite flight in Asia (our previous flights on Qatar Airways and Bangkok Airways were very nice). The seats on Air Asia were small and there were no amenities without paying extra, even food or water. Our friends in Taipei arranged for a car to pick is up at the airport and take us to their house where they were graciously letting us stay. Taipei was surprisingly foggy and chilly which was a shock coming from warm and humid Thailand.

For dinner we took cabs to Mala 1 for hot pot. Hot pot is a style of Asia cooking where raw vegetables, seafood, meat, and noodles are brought to your table and cooked in a large pot of boiling broth. The meal is usually eaten over rice and with a variety of sauces. I’ve had pot hot a few times before (in Seattle and in Washington, DC) but Mala 1 was by far the best hot pot experience I’ve had. The restaurant was very nicely styled and felt like an event. At Mala 1 you pay per serving of red meat, however a buffet of seafood and vegetables (with one of the best selections I’ve seen in a restaurant) is included. The buffet service also included beer, dessert, and ice cream. After dinner we went to a bar called Carnegie’s. Because of its proximity to a popular hotel Carnegie’s more westernized than other areas. 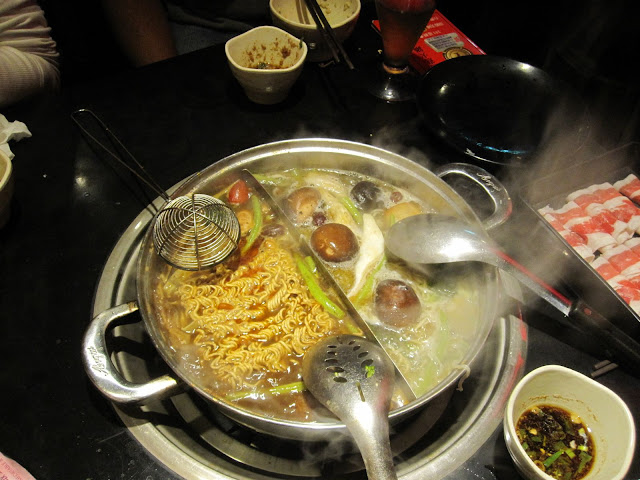 Although Travis had to work, we were very lucky Diana had some time off of work and played tour guide for us all week. For late breakfast we walked to Shan Xi Dao Xiao Mian, a small restaurant for Niu Rou Mian. Nie Rou Main is a type of beef noodle soup made with gooey shaved noodles and tender fatty beef chunks. I thoroughly enjoyed it and recommend shaved noodles to any pasta lover. 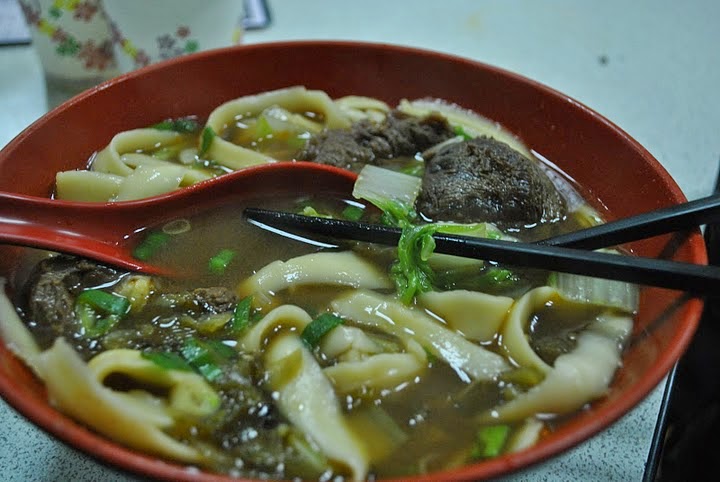 After eating we caught a cab to Taipei 101, the second tallest building in the world at the time. The outdoor observation area was closed, but inside we took the world’s fastest elevator up 89 stories. Besides the city views, which were foggy at the time but still went far into the distance, the Taipei 101 features the building’s mass damper as a highlight for public view. 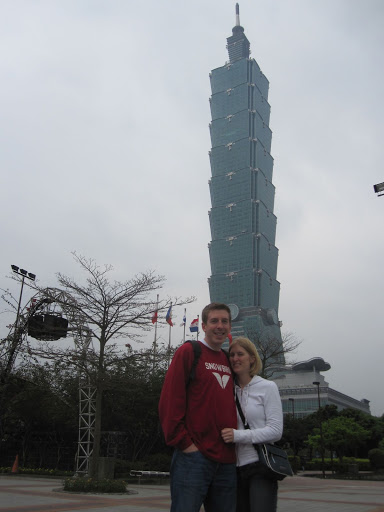 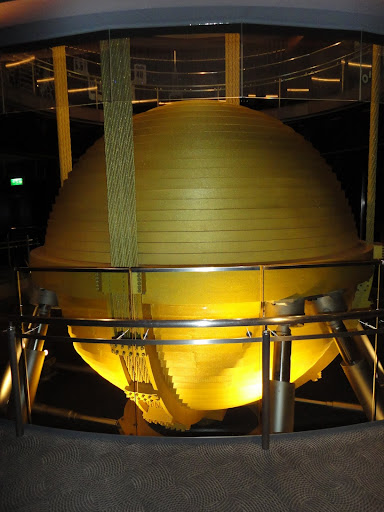 The next stop of the day was the Dr. Sun Yet Sen Monument. Every hour they have a changing of the guards which we fought a crowd to see. Next we took a cab to the Chiang Kai Shek Memorial and Liberty Square. Flanking the memorial are the national concert hall and theater. We walked through the base of the monument where there is an exhibit hall with displays about Chiang Kai Shek’s life. Outside in a small park is a pond of coyfish which can be feed by the tourists. Before leaving Liberty Square, we stopped for a snack at a the Chun Shua Tang Tea House under the National Concert Hall. Our final stop was the Handcrafts Market, a 4 story building full of souvenirs made by local artisans. 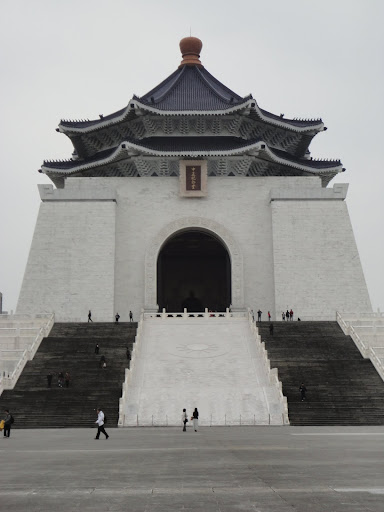 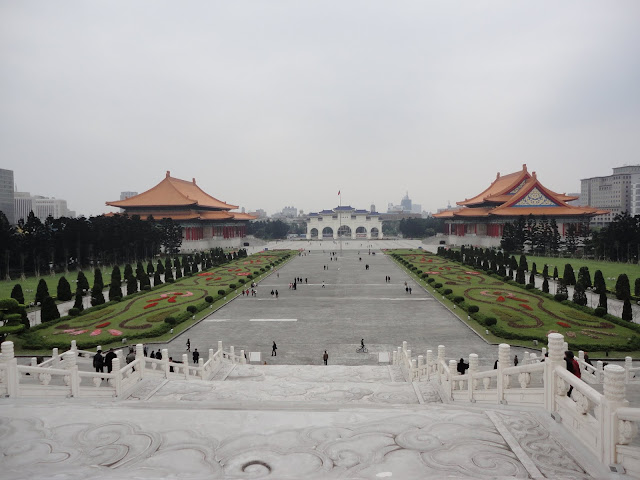 For dinner Travis and Diana took us to Kiki for Szechuan chicken. The chicken was great and we had several orders of it. After dinner we went to the Shida Nightmarket which was bustling with locals (much different than the night market we went to in Chang Mai which seemed to carter to tourists looking for souvenirs). At the night market our friends took us to i-Baked (which unfortunately appears to be closed now) for milkshakes made with freshly baked cookies crushed in. After our desserts it started to rain which put an end to our night market experience. 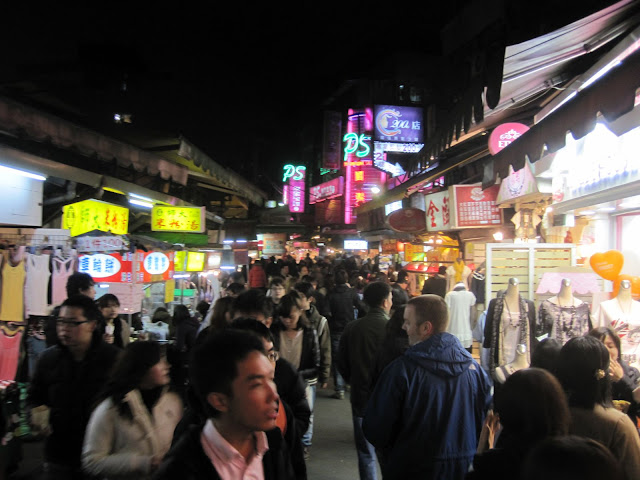 We started our last full day by going to breakfast at a little cafe where we had Taiwanese pancakes with eggs and scallions, Cong You Bing. After eating we rode the sky train, subway, and bus to get to the National Palace Museum. We spent about two hours walking around the first exhibit building and gardens. I think our group enjoyed the gardens the most, but the museum had a lot to offer and we only saw a small part of it. While lunch was unplanned, Diana recognized a nearby restaurant as part of a chain she was familiar with (possibly Ba Fang Yun Ji) and we stopped there for dumplings. Dumplings in Taiwan are delicious and the only thing are friends couldn’t agree on was which were better, the steamed or fried dumplings. From the Palace Museum we took the sky train to Beitou Thermal Valley. Beitou Thermal Valley is an area of natural hot springs. The springs are free to walk around, however they are too hot to get in so no swimming is allowed. If you want to take a soak in the hot springs, you can go to one of the many hotels in the area which pump in the water and let visitors swim. 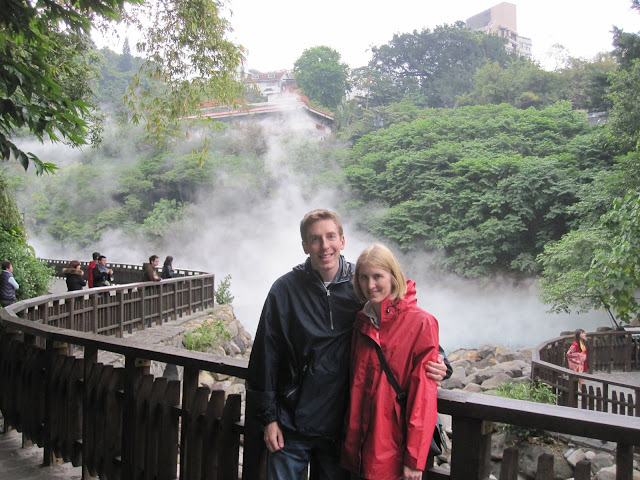 Dinner that night was the most anticipated meal of the trip, xiao long bao (soup dumplings) from the world famous Din Tai Fung. A soup dumpling is a dumpling wrapper filled with broth. The dumplings have to be eaten by first carefully puncturing the wrapper and letting the soup cool. We have some theories on how they might be made, but you can come up with your own. Din Tai Fung is also known for their steamed buns. We had a great time at Din Tai Fung with our friends and it was probably the highlight of Taiwan. 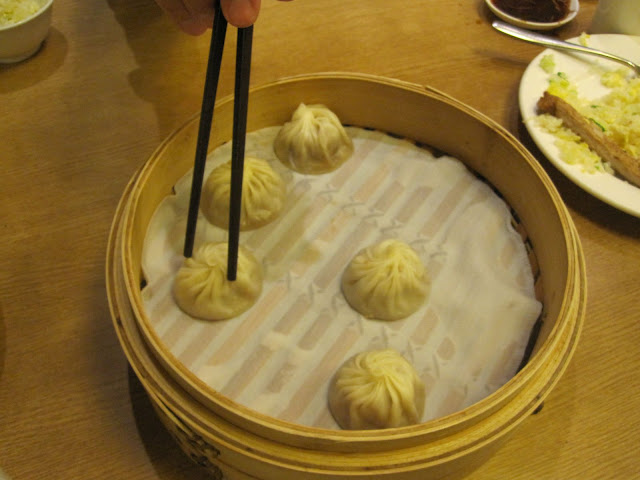 After eating we walked to a British pub, On Tap, where we had a drank a few towers beer and played some games. The boys decided returned to I-baked for more milkshakes as our last stop in Taiwan.

If you are able to go further from the city, also try: 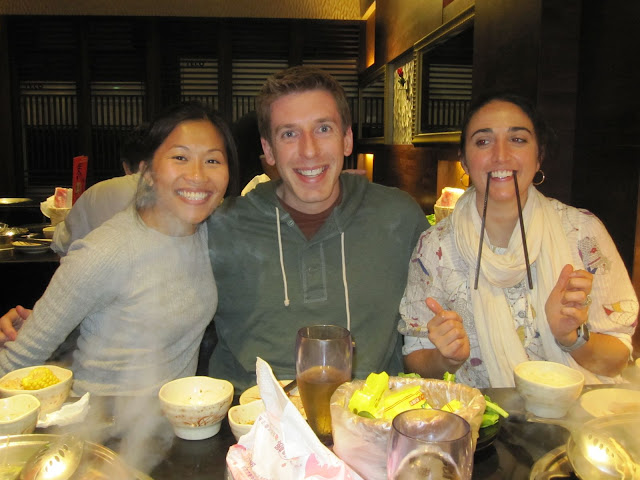 Jon with Diana and Candice at Mala 1 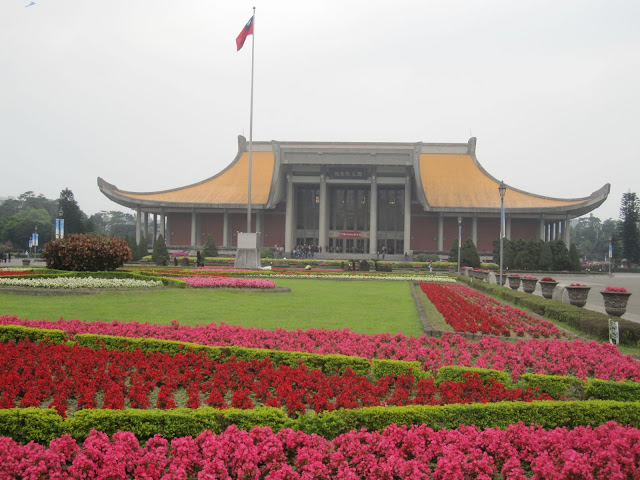 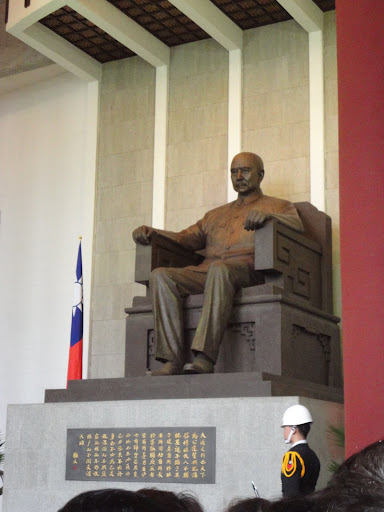 Dr. Sun Yet Sen, changing of the guards 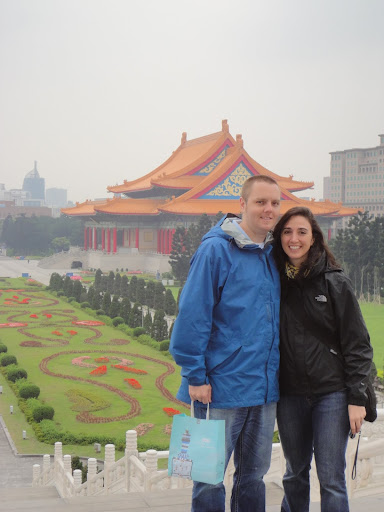 Jeff and Candice at Liberty Square 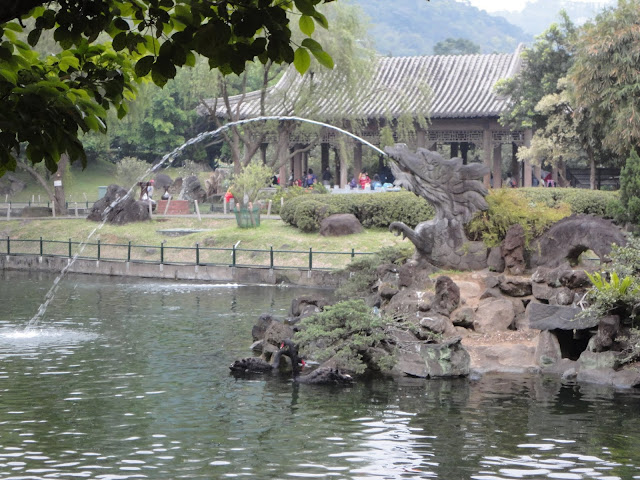 Garden at the National Palace Museum 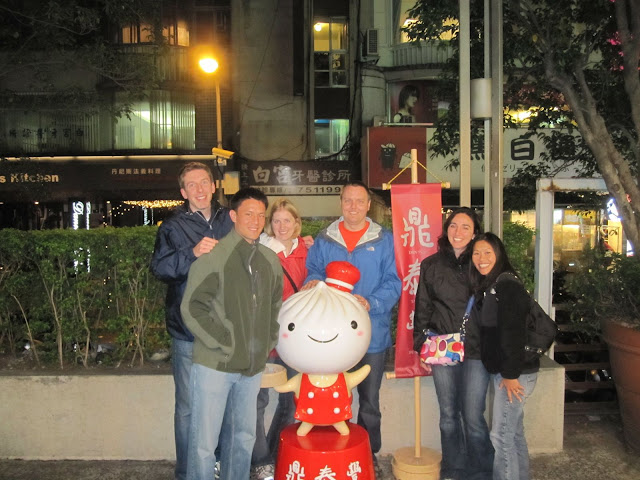 The group at Din Tai Fung