For a long time I’ve wanted to go to N’awlins; the food, the music, the mysterious history, and the character. We went to New Orleans in mid-April, and it was hot! If you are not a night owl and plan to be out in the day, I wouldn’t recommend going to New Orleans in the summer. For us, the trip really became about one thing- the food. 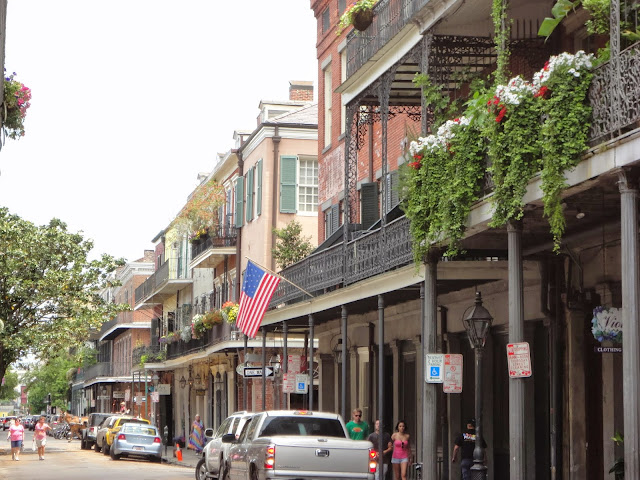 We arrived late on a Tuesday to the great French Quarter apartment we found on Airbnb. Since we were within walking distance to Bourbon Street we decided we had to go see it on our first night in town. There are three classic Bourbon Street drinks and we tried 1 each night, starting with a Hurricane. Bourbon Street on Tuesday was definitely busy, but nothing near as crowded as it would become later in the week. It was a nice introduction to the area.

Wednesday started with coffee and beignets at Cafe Beignet. Cafe Beignet had a breakfast menu of southern classics such as Cajan hash, crawlfish omelets, and grits as well as the powder-sugar covered fried beignet. Because we didn’t have any activity planned for the day we decided to take a street car to the Garden District. The street cars started out as a nice amenity but became the biggest disappointment of the trip as track work forced us out of the street car and onto a bus. The sparsity of the buses would later cost us hours of waiting time. 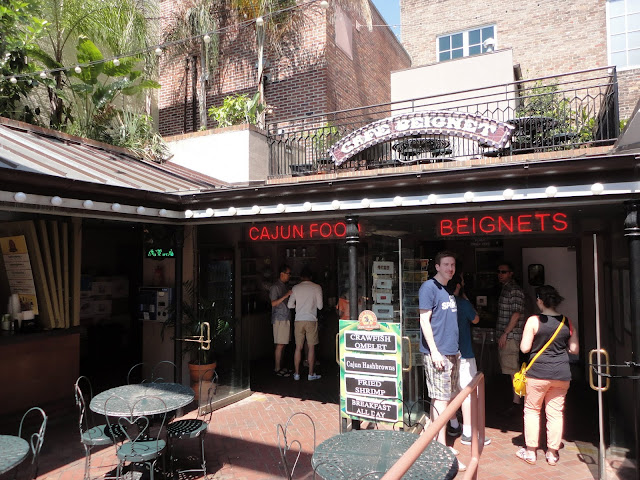 The Garden District was beautiful and serene. Large trees lined the road hanging over the street car tracks. The houses were grand bringing to mind the Southern Estates one expects to see in the south after watching Gone with the Wind. Several celebrities own houses in the Garden District, but we limited out sight seeing to the house featured on American Horror Story: Coven. Just a few blocks off of St. Charles Street the houses scale down, but remain soaked in southern charm and Mardi Gras beads.  For lunch we ate po’boys and sandwiches at New Orleans Hamburger and Seafood. Dinner was even further from the down the trolly line at Oak, which our local friends chose. 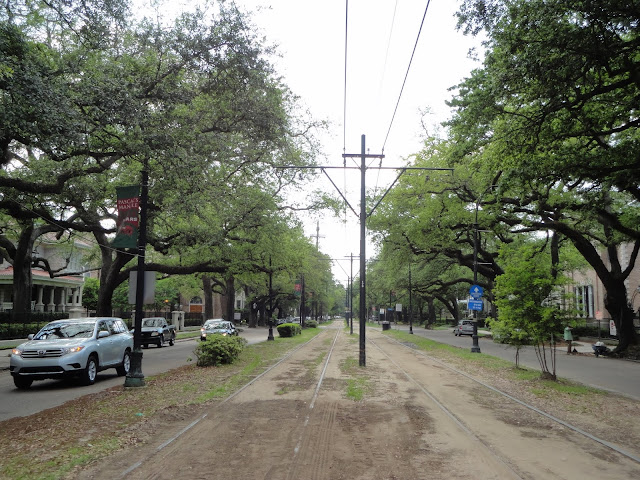 Streetcar line through the Garden District

We spent Thursday exploring the French Quarter. The French Quarter feels quaint during the day, not like the large city its in. With its unique iron work architecture and humid palm tree lined streets The French Quarter is somewhere where old world Europe meets the Caribbean tropics; Paris and Key West combined. We got a late start so we forewent breakfast and instead got po’boys from one of our must try restaurants, Johnny’s Po’Boys. Johnny’s has a reputation for good authentic po’boys and an unpretentious atmosphere. Our group all opted for combos of po’boys and gumbo and everyone enjoyed their meal. 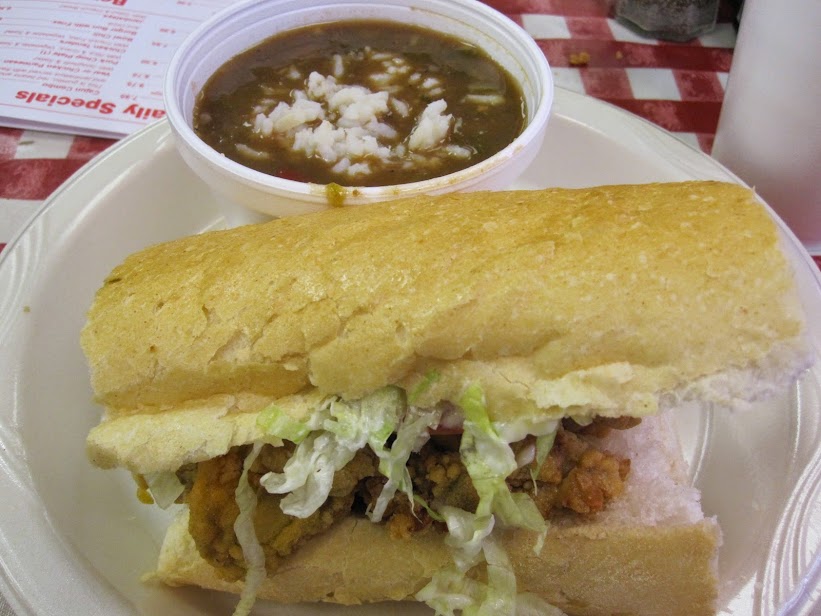 From Johnny’s we did some site seeing around Jackson Square and the Mississippi River. As a quick break from the heat we got gelato from La Divina Gelateria; avocado and Bourbon Pecan were big hits with us. In the afternoon we met up with a walking tour through witches brew which we purchased on Groupon. The walking tour was a nice way to see New Orleans and our guide was a character in herself whose love for the city was apparent. Overall we enjoyed the tour, but were glad to have had the groupon and felt that we got what we paid for. The tour included Pirate’s Alley, St. Louis Cemetery #1, and a brief stop at Louis Armstrong Park where they were preparing for a free concert that afternoon. For dinner we decided it was time for some seafood, so we went to Felix’s Restaurant and Oyster Bar. The line moved quickly and we were all delighted by the char-grilled oysters, but most of the seafood was fried. Felix’s is definitely a place where you should plan on ordering family style for the table. 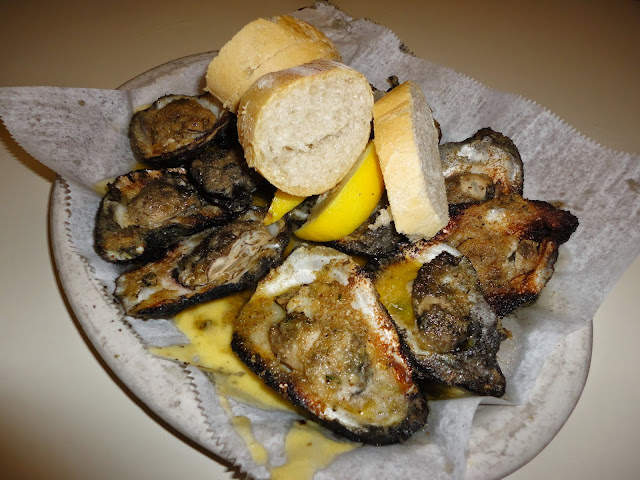 Wednesday night we went back to Bourbon Street where we tried the famous Hand Grenade. Like the Hurricane before it (and the Jester after it), the Hand Grenade was a sickeningly sweet concoction of juice, liqueur, and sugar. We walked the entire length of Bourbon Street which is filled with bars featuring cover bands and quick drink-to-go markets advertising ‘big ass beers’ and an assortment of frozen cocktails. At the very end of Bourbon Street is Jean Lafitte’s Blacksmith Shop Bar. Billed as the oldest structure used as a bar and a former pirate hang out, Lafitte’s maintains its historical ambiance by being candle lit. Entertainment is provided by one piano player playing bar standards.  We really enjoyed the more laid back feeling and casual crowd attracted to Lafitte’s. 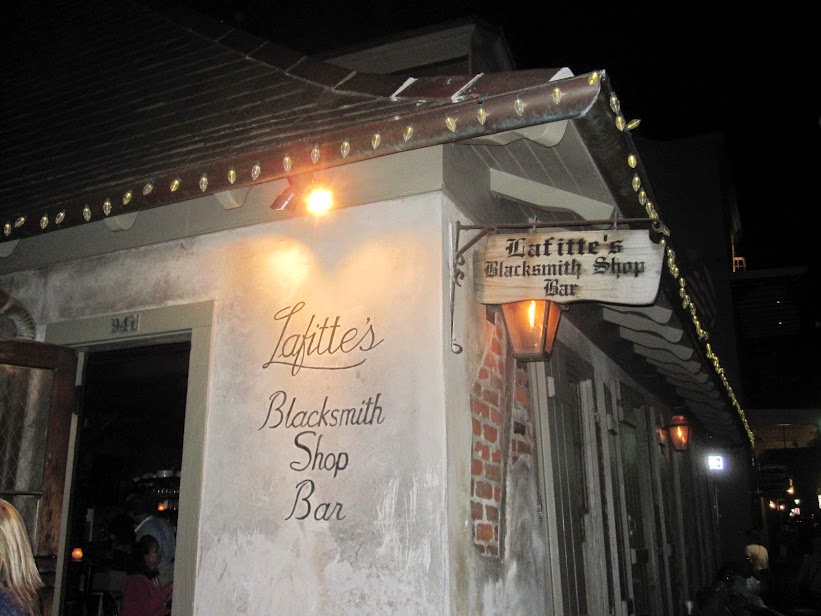 Friday we decided to do something different and get out of the city.  We wanted to do a swamp tour, but decided that our group would enjoy a swamp tour by kayaking more. New Orleans Kayak Swamp Tour picked us up in the French District and drove us to the Pearl River. We had our choice of 1 or 2 person open kayaks and several guides came along. We really enjoyed the chatting with the guides, they were relaxed and easy going. During the tour we saw hunting shacks on the water, spiders, and a cottonmouth snake. Jon and I even took a quick dip into the water when we found an old rope swing in the trees. As an added bonus, the kayaks launch from a bar which was used as a set in HBO’s True Detective. For dinner we went to Pier 424 Seafood Market. Pier 424 was good, and had more variety (and less fried food) than our previous attempts to get seafood. After dinner we got cocktails at Cafe Beignet’s Jazz Garden where we could sit outside and enjoy some local musicians. The crowd at the Jazz Garden wasn’t the normal Bourbon Street type, but that suited us just fine. 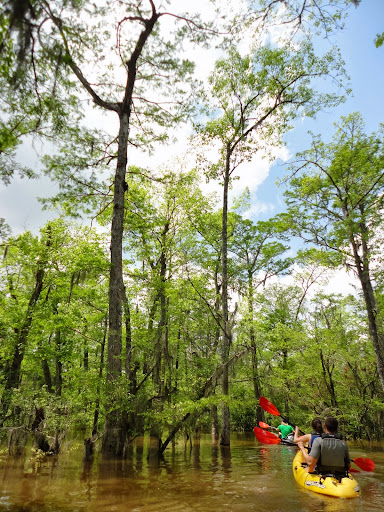 Kayaking in the Swamp

Saturday was our last full day in New Orleans, so we had to eat at Cafe Du Monde at least once. Cafe Du Monde is the premier spot for beignets and coffee au lait (but be warned that is all they serve). The line was long, but moved quick. Without any set plans, we took a walk towards The French Market and Frenchman Street. We stopped for sandwiches and tried the infamous Muffaletta. Saturday’s dinner was our chance to have the whole group together for a nice meal, so we went to Muriel’s. From the historical venue to the delicious food, Muriel’s was a step up from the rest of the dinning we did in New Orleans. Since it was our last night, we had to get the last Bourbon Street drink, the Jester. 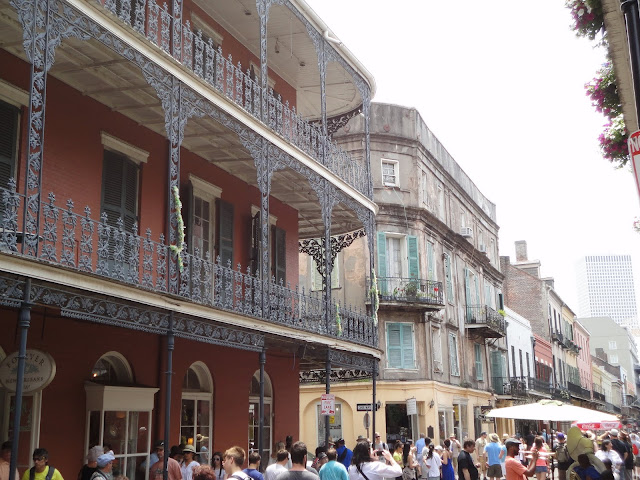 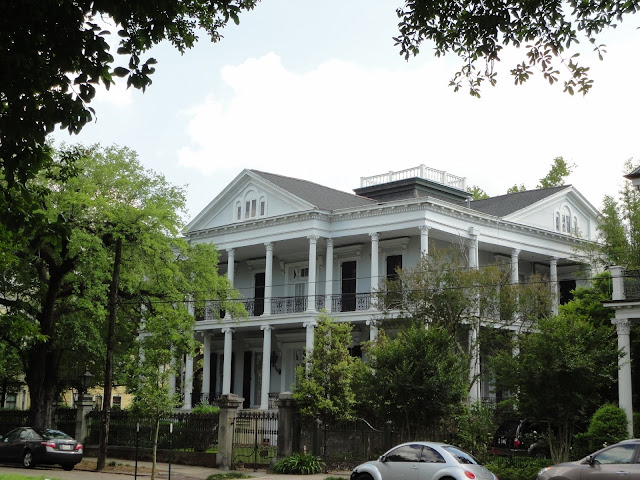 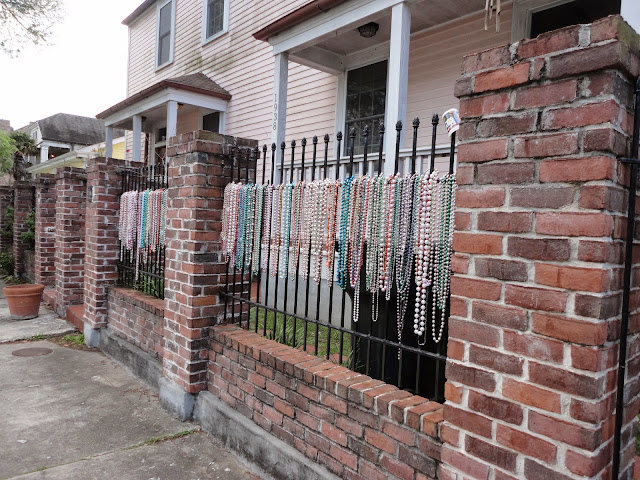 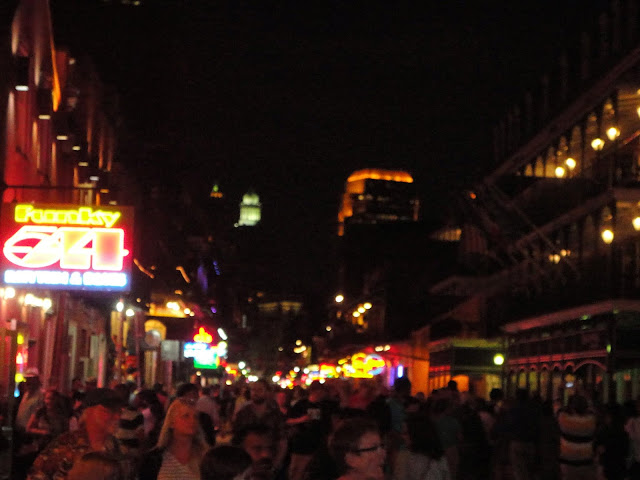 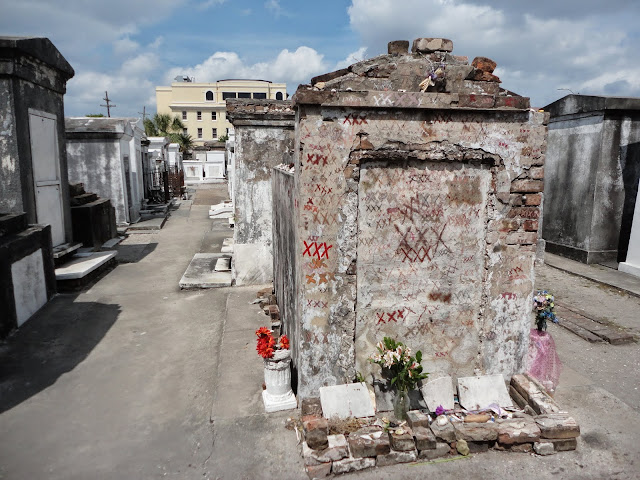 St. Louis Cemetery #1 (not Marie Laveau’s tomb although she was in the cemetery too) 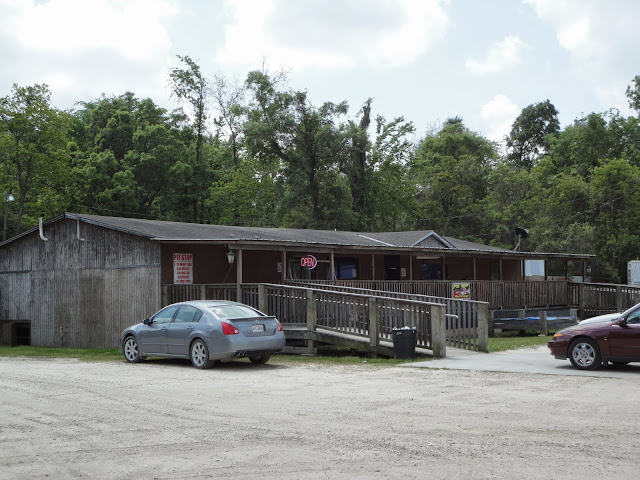 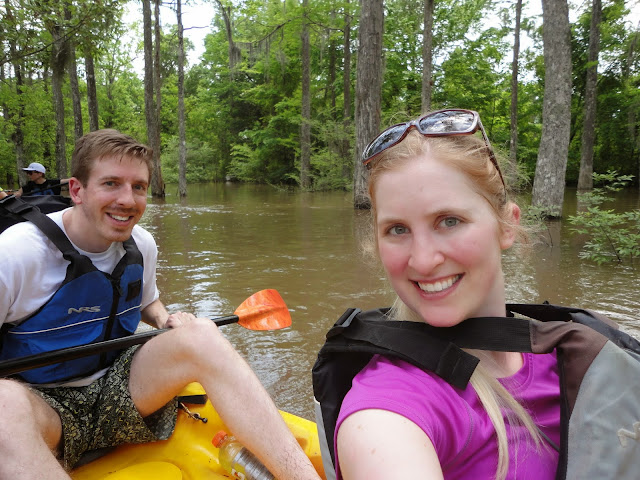 We survived sharing a boat 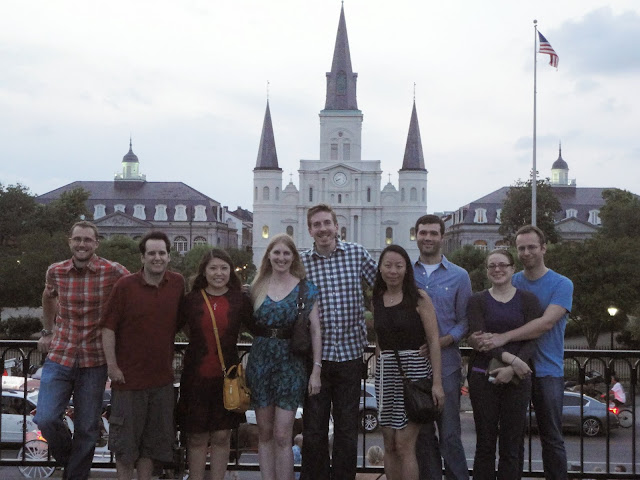