Osaka was our last stop in Japan, and although we were exhausted, we managed to have one very full day visiting the castle, floating garden, and Dotonbori Street.

We weren’t able to get reserved seats on the bullet train from Hiroshima to Osaka, but we were easily able to find seats together in an unreserved car. It was a slight walk to our hotel, but Osaka seemed busy and alive. Osaka had more going on at 8pm on a Tuesday night than most towns we visited did on a weekend. When we checked into our hotel it was nice to find the largest room we had had throughout all of Japan. 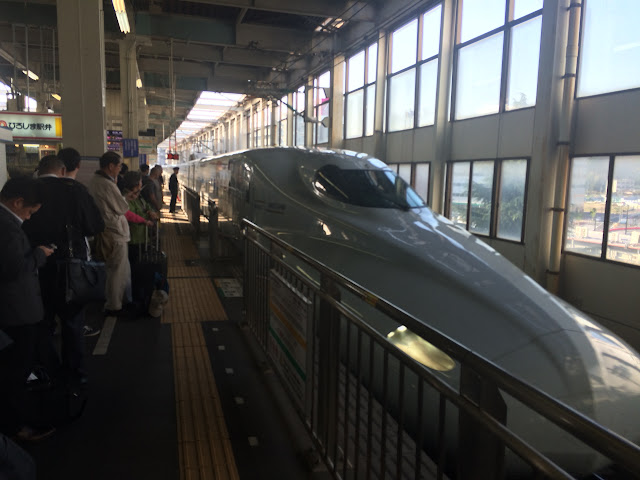 Our hotel was very close to Dotonbori Street, a popular pedestrian street with a lot of nightlife. The street was full of people. Large, showy restaurants with giant plastic dragons and crabs over the doors were along the street. Many people were lined up to eat street food, particularly okonomiyaki and takoyaki. Not wanting to try those foods again, we ate at a chain of gyudon (beef bowl) restaurants. On the way there, a distracted bicyclist almost hit Jon on the sidewalk, lost her balance, and wiped out on the street. She was shaken up but seemed okay. This was the first time we noticed all the bikers in Osaka. More on that later. 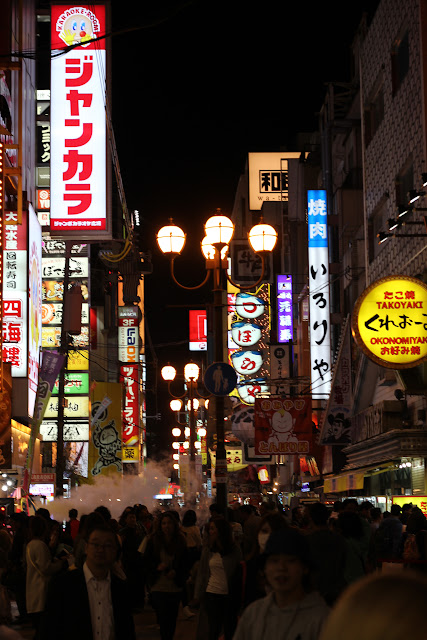 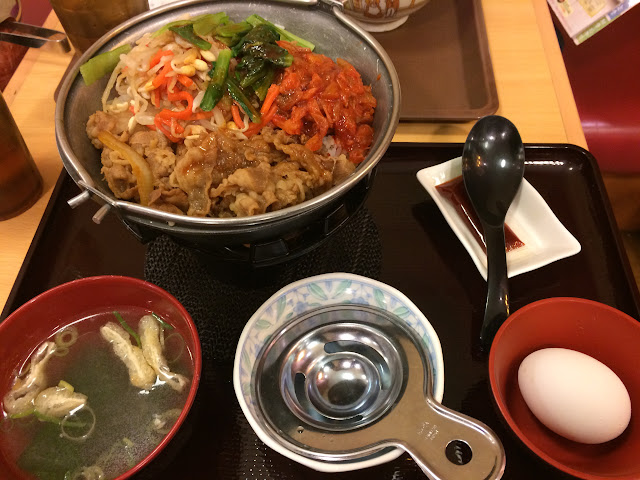 Wednesday was our 19th day in Japan and we were Japaned-out. We were templed-out, gardened-out, and noodled-out. We slowly dragged ourselves out of the hotel and in search of food. We returned to Dotonbori Street. After walking past it a few times we decided on a Japanese restaurant without an English name and with a large paper fish over the door. We picked this restaurant because of the sample food displayed in their window, meals of food for under 600Y. This turned out to be a good decision. We both ordered combination meals; mine with chicken and Jon’s with tempura, that we really enjoyed. Jon’s meal wasn’t on the English menu, but he pointed at someone else’s meal that looked good. Both meals came with several sides including sashimi, pickled vegetables, and soup. 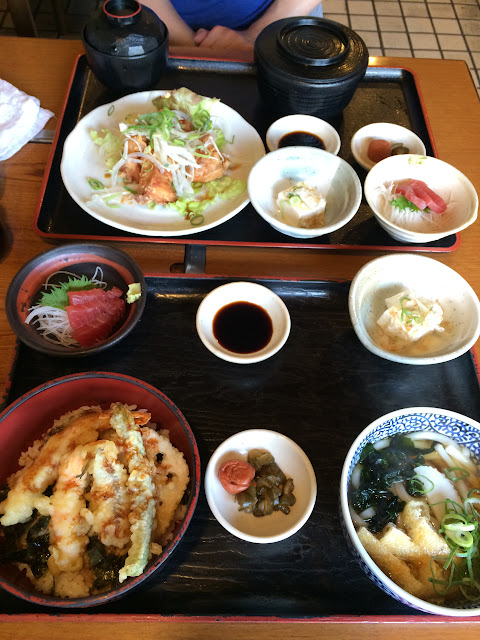 Because we had done so much in Japan already, we didn’t have any high priority sites to see in Osaka. We decided to walk towards the Osaka Castle, which was a 40 minute walk, so we could see some of the city along the way. The city we passed on our walk was boring. Most of Osaka didn’t have the same energy as Dotonbori Street. We also didn’t stumble on any city squares, parks, or landmarks. The only thing Osaka seemed to have were bicycles, and it had a lot of bicycles. I think Osaka had more bikes than anywhere I’ve been including the Netherlands. Parked bikes lined sidewalks throughout the city and we often had to dodge distracted bike riders as they came down the sidewalk taking on their phone or looking over their shoulder at their friend. Our destination, Osaka Castle (大阪城), is located in the center of Osaka Castle Park. Most of the park was free to walk through and we were able to walk all the way up to the Castle before an entrance fee was required. We decided not to pay to see another castle and instead walked to the park plum tree grove. It didn’t take long before the sun had exhausted us and we were ready to find a new destination. 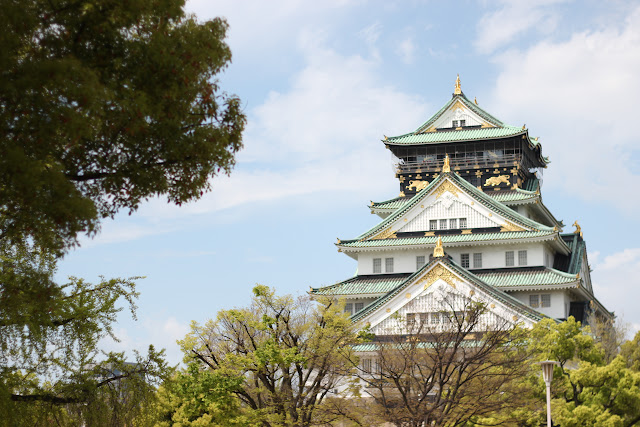 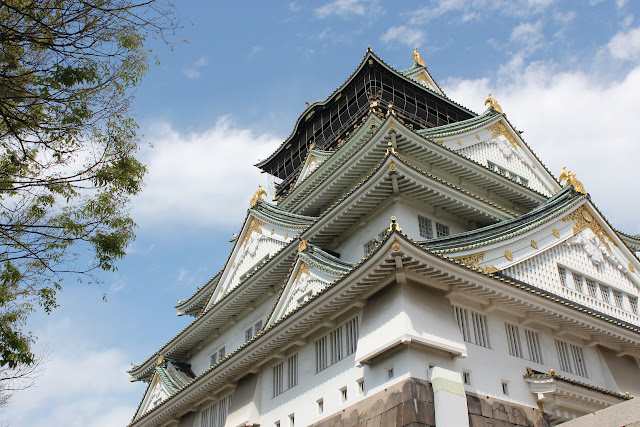 We took a train towards the Kaiyukan neighborhood and the popular Osaka Aquarium. We didn’t know anything about Kaiyukan except that it was along the water. When we got of the metro there were a few blocks of cute stores that lead to the aquarium but not much else in the neighborhood. Near the aquarium was Tempozan Park with a nice view of a bridge (and in the distance we could see part of Universal Studios). There was also a large ferris wheel and the Tempozan Market Place. The Market Place was mostly a tourist mall and food-court. When we had seen enough of Kaiyukan we took another metro to Umeda and the Umeda Sky Building. The Sky Building provides a view of the city, but we had wanted to see the skyline at night. To kill some time before arriving, we stopped for gelato. Shortly after dusk we reached the Umeda Sky Building. The building is very unique and is comprised of two towers connected by an observation deck across their tops. The observation deck is stunning because of its signature hole cut through it. Additionally the building features the world’s highest outdoor escalators. The observation deck, also called the floating garden, cost 800Y to enter. We were surprised to find that we could take the elevator and worlds highest escalator all the way up to the top of the building before having to pay. The observation deck is two stories. Inside luxury seats provide amazing views of the city and there is a small cafe. On the upper story is an exterior platform which you can walk around to see 360 degree views of the city. 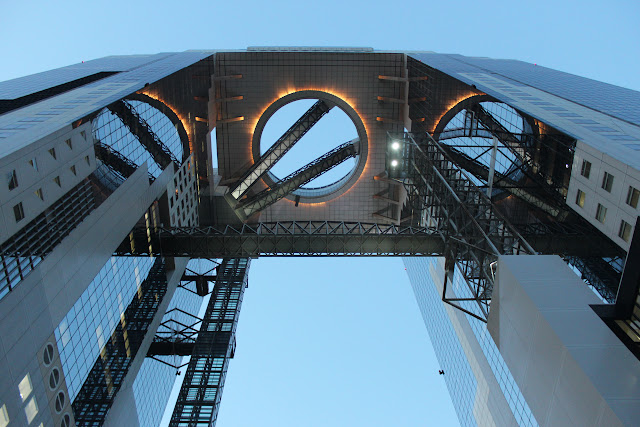 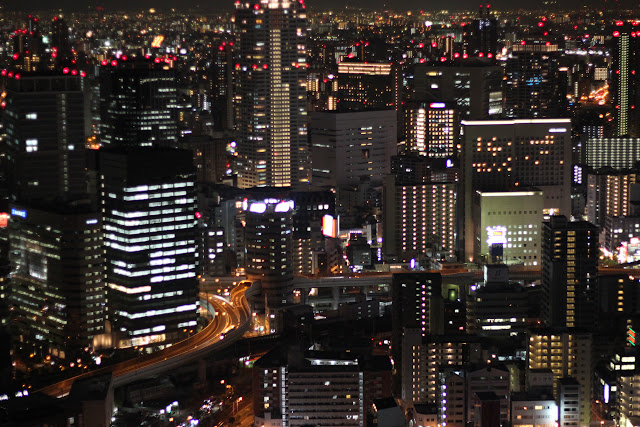 The Umeda Sky Building had free wifi, so we relaxed indoors and planned our dinner. We read about a yakiniku (Japanese BBQ) restaurant that was all you can eat and back towards Dotonbori and our hotel. Unfortunately, Yakiniku Rokko Shinsaibashi was fully booked. We looked nearby and finally used our phones to find Yakiniku Shuka Gyukaki back in Dotonori. I think Yakiniku Shuka Gyukaki is a chain, but it was delicious and one of my favorite meals in Japan. 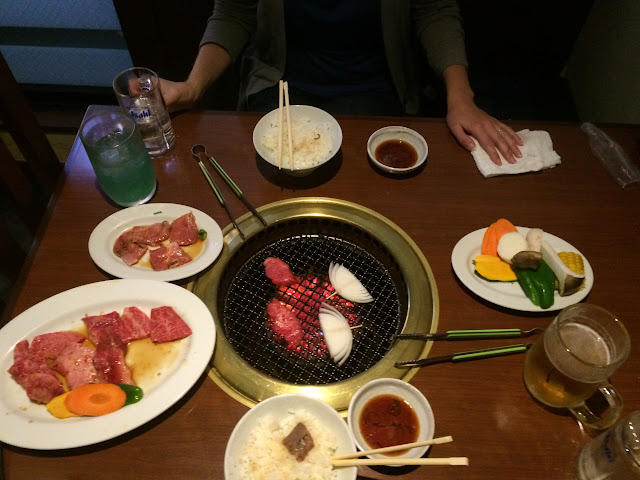 We woke up and caught the train to the airport for our flight to Hong Kong. 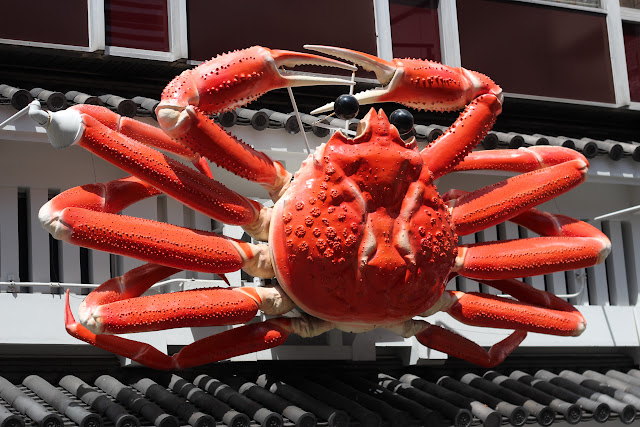 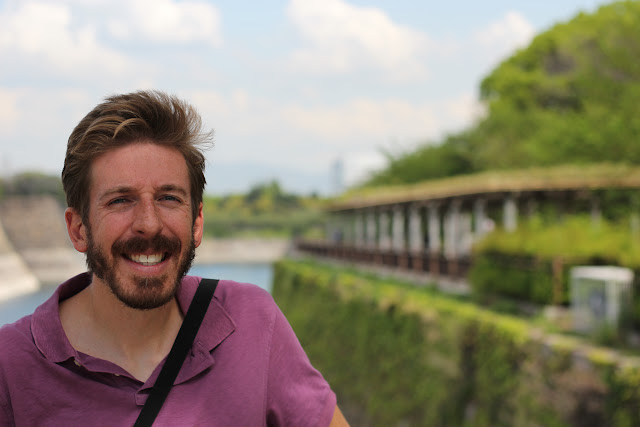 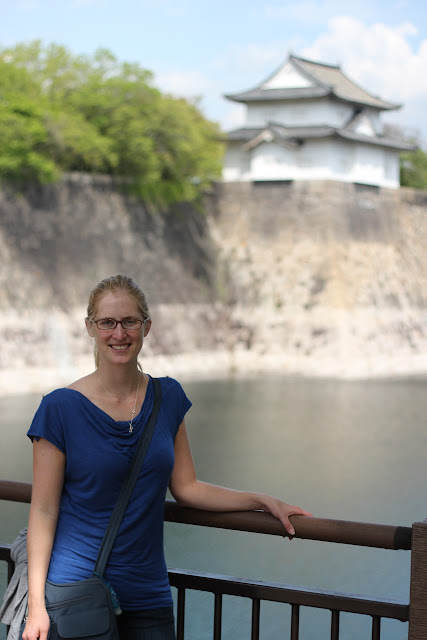 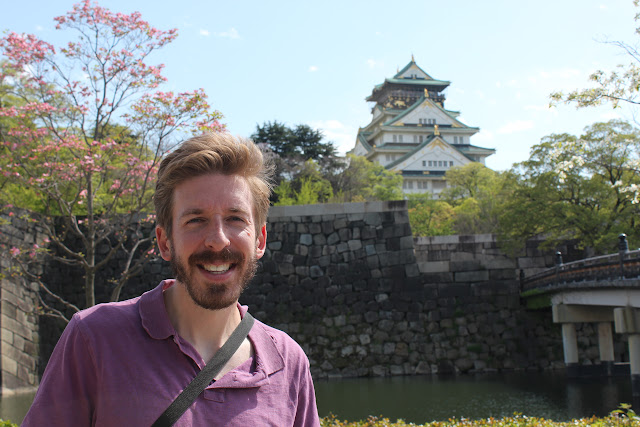 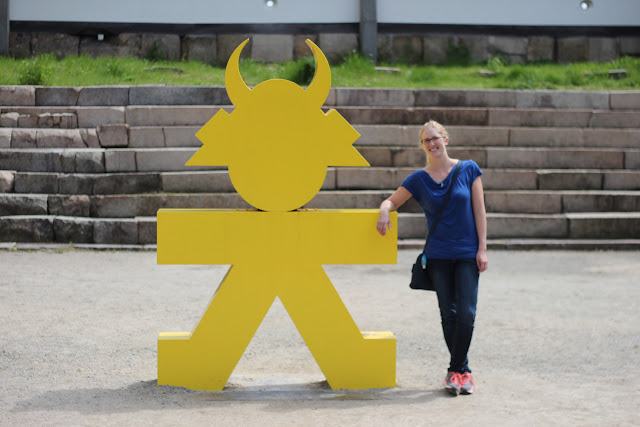 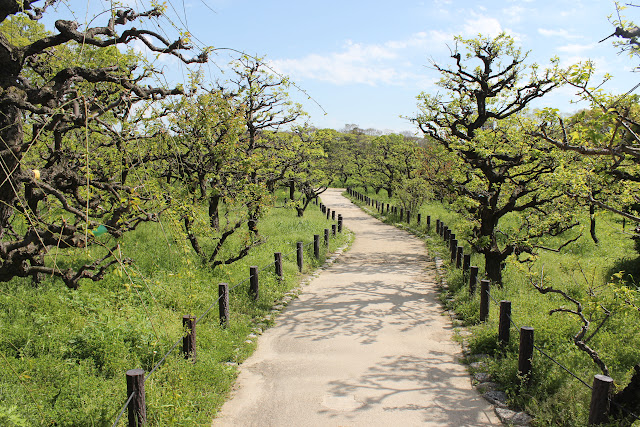 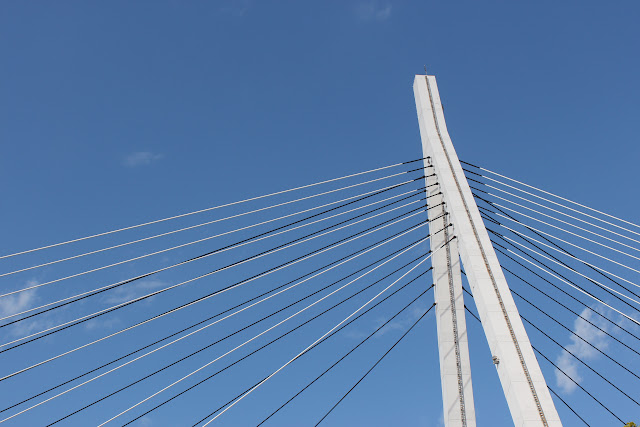 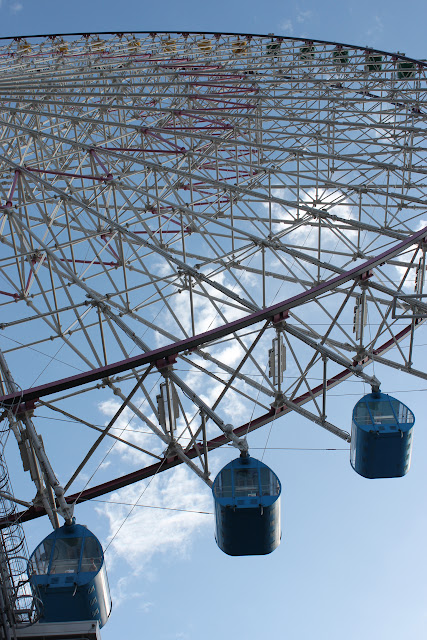 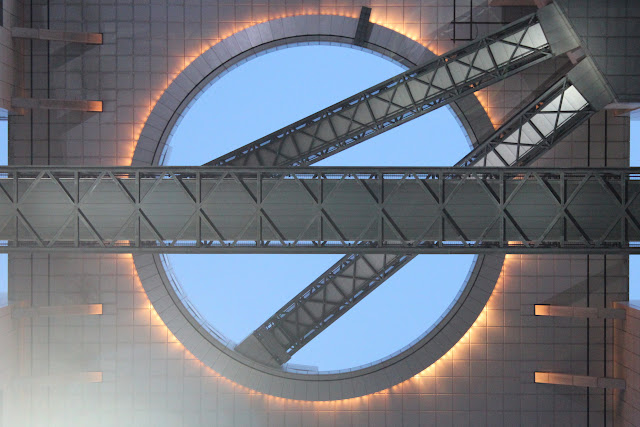 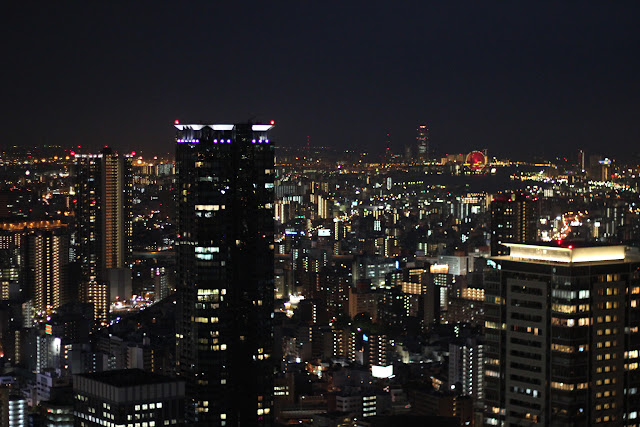 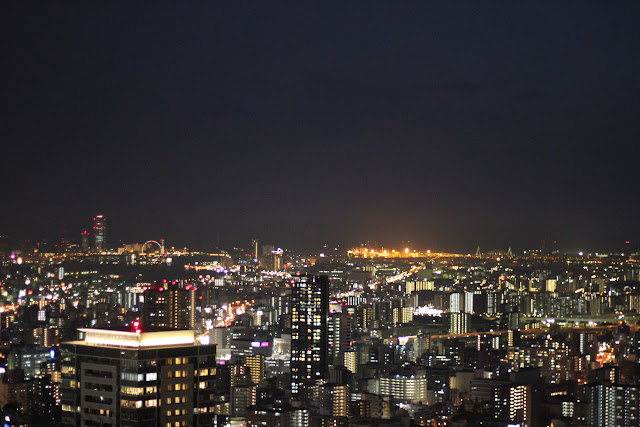 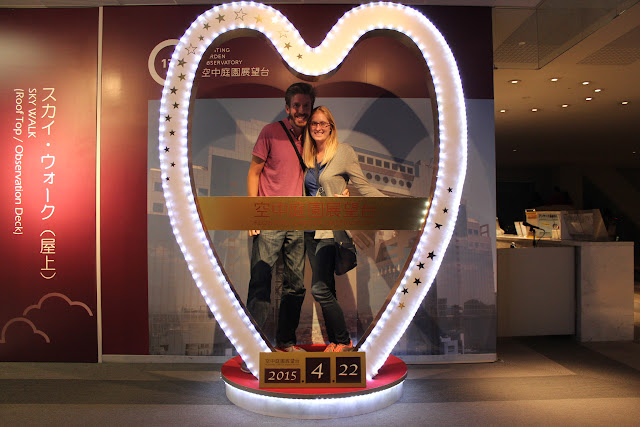 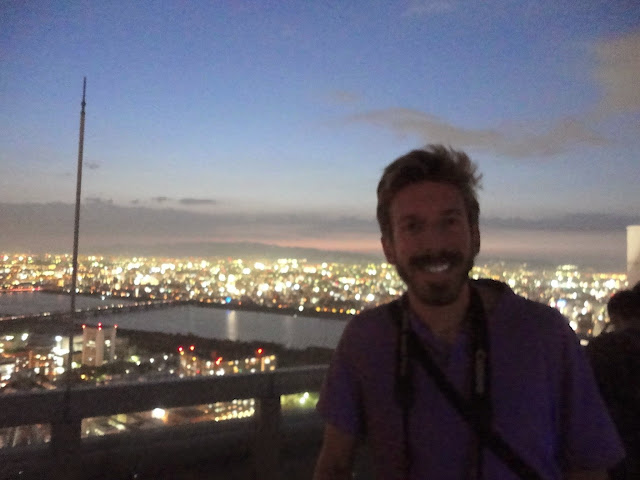 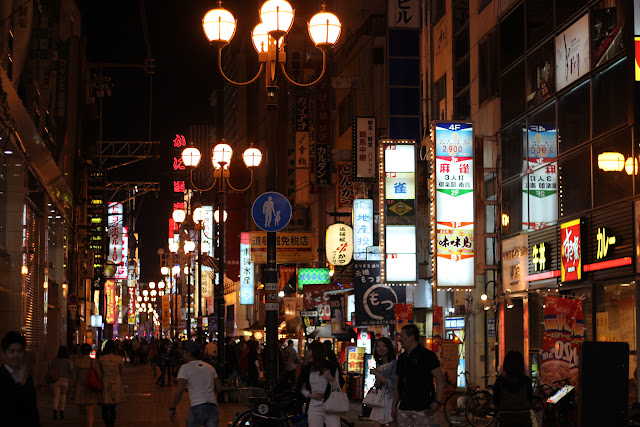 One thought on “Osaka, Japan (大阪)”