Melbourne was the first metropolis we’d visited in a while and it appeared to have a cool urban vibe to it. Street art and food are king in Melbourne and both can be found down the alleys and laneways which Melbourne is known for.

From the Melbourne airport we took the Skybus ($18/person) into the city. The Skybus takes passengers to the Southern bus terminal, but then offers van rides to hotels and hostels for no additional cost. We decided to take advantage of the service and were taken to our hostel.

Our hostel was Flinders Backpackers. We picked it for its location on Flinders Street, close to Flinder’s train station. When we checked in, the first thing that caught my attention was the large number of people cooking big dinners for themselves in the kitchen. The hostel is in a large building which I think it has 7 floors on and rooms ranging in size from 16 person dorms to 2 person rooms. The hostel also seemed to promote more activities than the places we had stayed in other countries; a movie with popcorn is shown on Wednesdays, a free pasta dinner is served on Thursdays, and free breakfast is provided everyday. For us the only negative was that internet service cost extra. 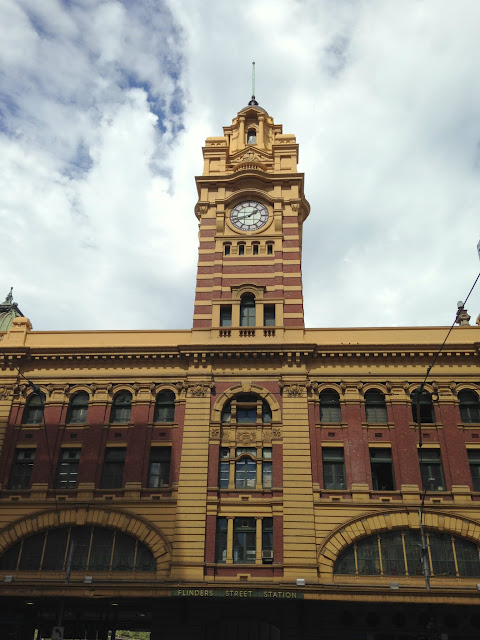 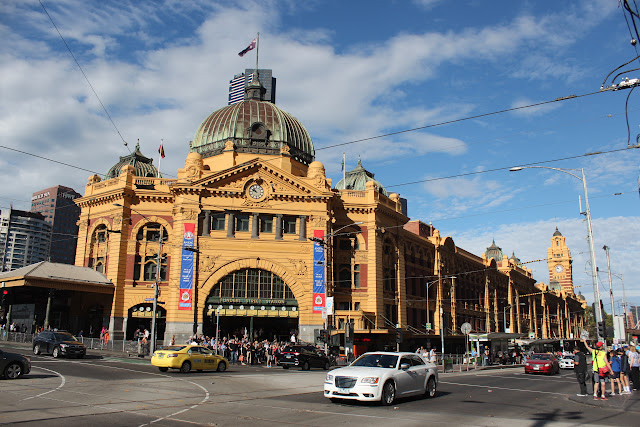 After checking in we decided to wander through the city and get dinner. Melbourne offers free public transportation on trams within the center business district (CBD), however we found the city to be very walkable and didn’t use the trams much. We headed towards the Bourke Street Mall, not knowing where else to go. Melbourne was very much about the food. We passed restaurant after restaurant with lines waiting to be seated. We checked menus for a while before deciding to eat Korean at Oppa. After being in expensive New Zealand, Oppa (and many other Melbourne restaurants) seemed very reasonably priced and the meal was good.  I got a bulgogi dish and Jon got bibimbap on a hot stone. 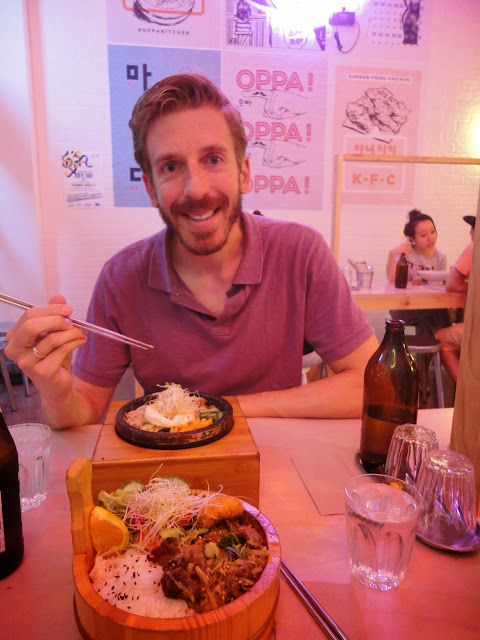 Not ready for bed yet, we walked more around Melbourne and headed to Federation Square. Federation Square is a cool place to be. Its a beautiful stone square surrounded by unique buildings. There is a lot of public seating and people tend to gather there. The square is also home to the Australia Center of the Moving Image, which was playing short animated films on large screens around the square. We sat down and relaxed while watching an Italian animation.

We were up early on Wednesday. The hostel free breakfast included cereal, toast, and pancakes; a carb lovers dream, and we ate some of each. To start our day in Melbourne we decided to explore some of its Laneways. The Melbourne laneways (similar to alleys) are known for their street art as well as for having hidden cafes and boutiques. The street art is city sanctioned, although many people spray over it with tags and meaningless graffiti. In our hostel we had found maps of self-guided walking tours including a list of 8 laneways to visit for street art, which is what we used as a guide. 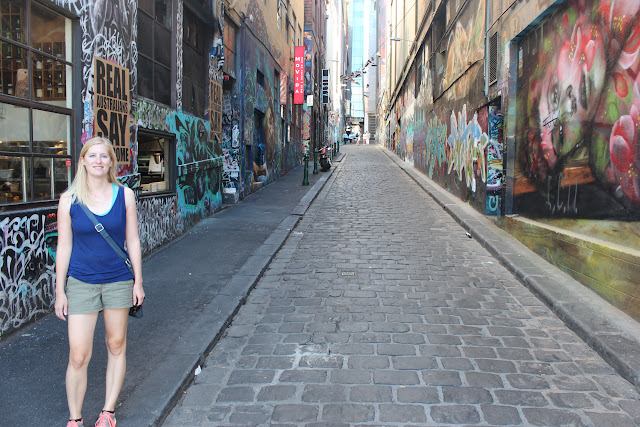 We started with Hosier and Rutledge Lanes and then continued on to Degraves Street, Cocker Alley, and Center Place. Some of the art was interesting. I also enjoyed some of the stencils because they stood out against the tags and other junk. We wished we knew a bit more about street art so that we could identify any notable artists that might have been shown. 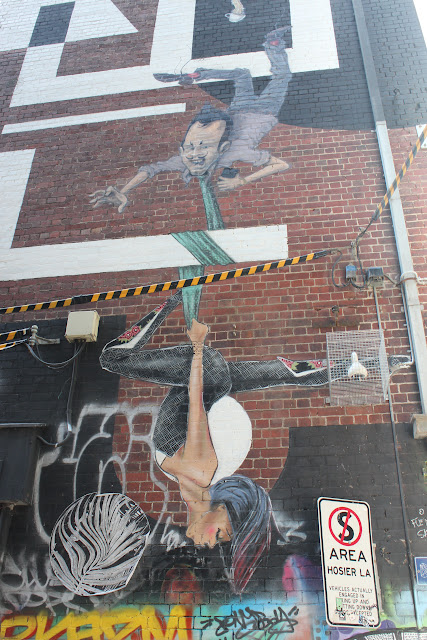 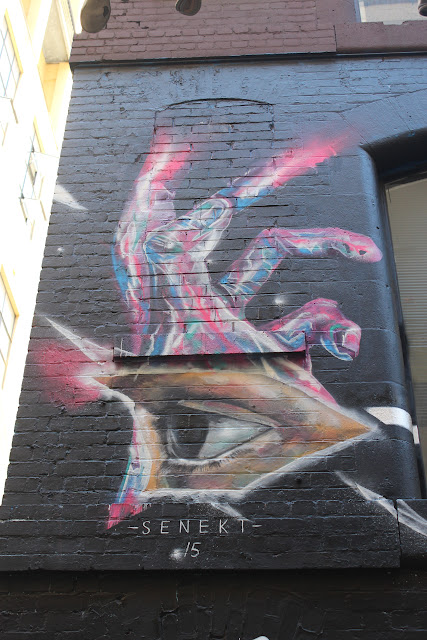 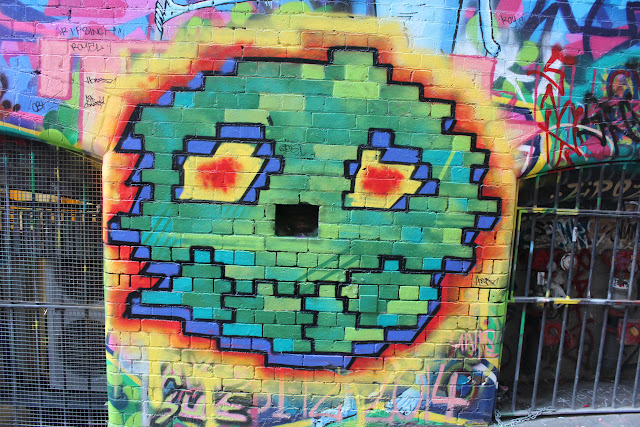 Melbourne is very tourist friendly. Over the course of the day we had picked up more maps then we’d ever need. Once, while looking at a map, trying to decide where to go next, a city volunteer approached us and asked if we needed directions. Melbourne also has many well marked public restrooms and several areas of free wifi. There is also a large visitors center in Federation Square who were helpful when we stopped by later to ask a few questions. 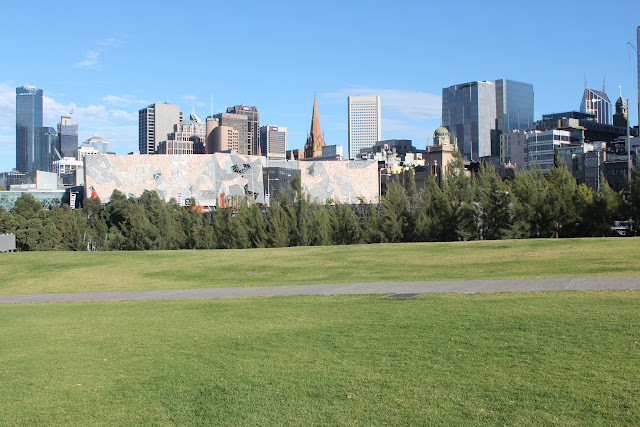 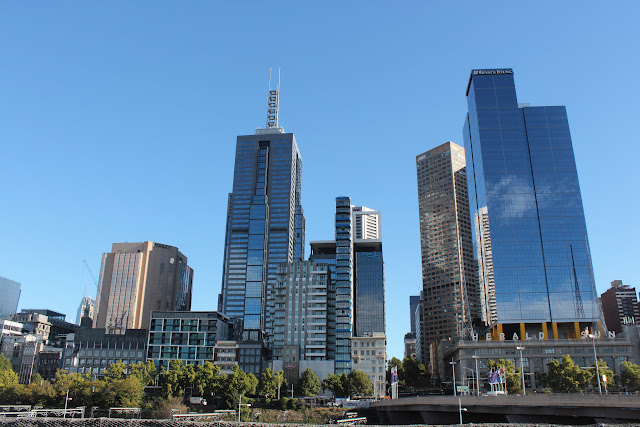 The Cricket World Cup was going on at this time and it just happened that the India vs Bangladesh game was being played in Melbourne this day. It was fun to watch a lot of fans from both teams rallying throughout the city. We caught part of the game on TV that afternoon. 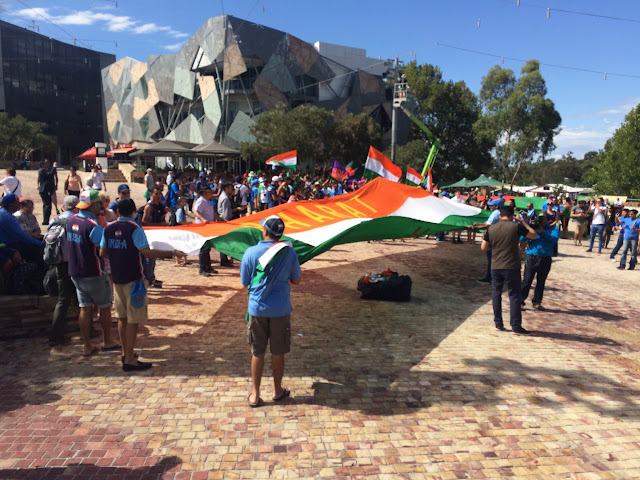 We decided to head towards Queen Victoria Market and stop at other laneways along the way. This time the laneways we visited included Union Lane, Caledonian Lane, and Finlay Ave. Along the way we also saw Melbourne Central. Melbourne Central is a mall, but it was built around the historic brick Coop’s Shot Tower. The tower was preserved and is now in a stunning glass cone in the mall. 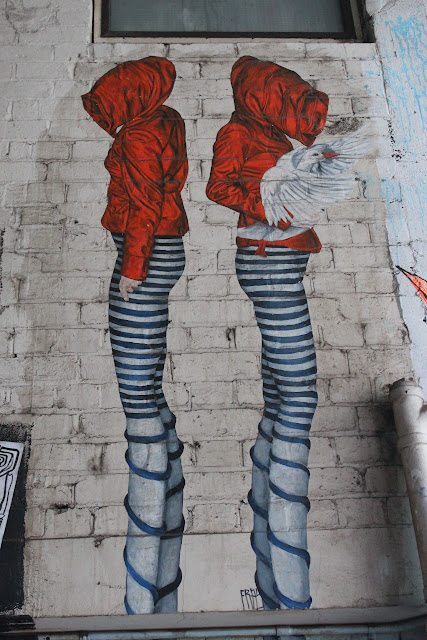 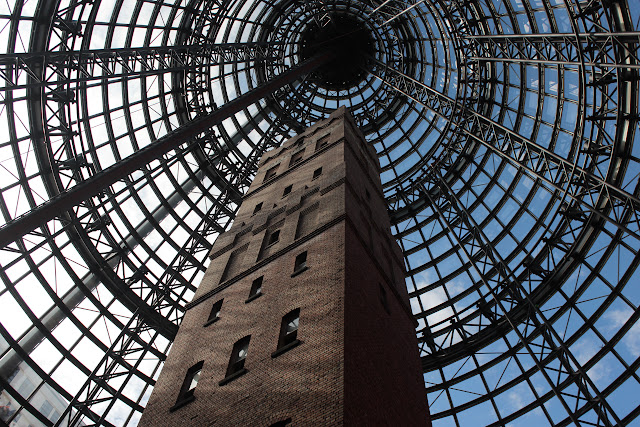 Queen Victoria Market was a large market divided up into several areas. We started in the general market area, which despite having some souvenirs, felt like a flea market. Eventually we walked towards the fresh produce. Signs pointed the way towards meats and seafoods, which appeared to be housed inside of a building instead of in open air pavilions like the other areas. There also seemed to be a building of delis and prepared food. 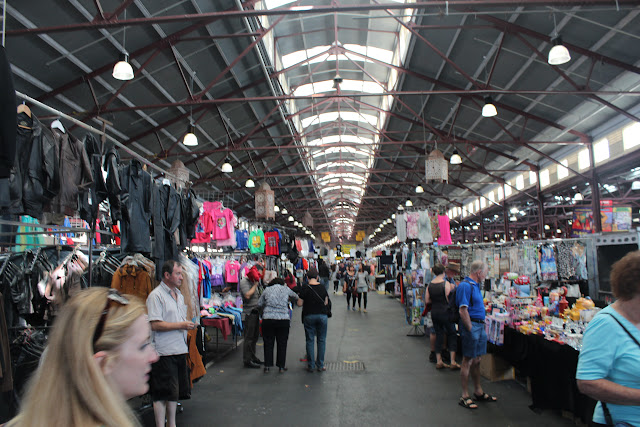 This time we actually did catch a free tram and take it back to Flinder Station. We wanted to take a tram all the way to St. Kilda’s beach for lunch, but were turned off to the idea when we found out how the tram ticket system worked. We would have had to invest $6 each just for the ticket and another $7.52 to ride to St. Kilda’s and back. Since we only had that one full day in Melbourne, we decided to spend it downtown instead. We got sandwiches from Center Place and ate them sitting in Federation Square.

It was now early afternoon and it was getting hot. I was tired and dehydrated, so Jon and I split up for a bit. I went to the hostel to relax while he went for a haircut and to find a cafe with internet service. When we regrouped, we headed back out at sunset for dinner. On the way to dinner I noticed the large number of street musicians Melbourne has. We ate dinner at Cookie, which was recommended by a friend who lives outside of Melbourne. Cookie is mostly Thai inspired food and was very crowded. We were easily able to get a seat at a bar table. The menu is divided into small plates, medium plates, and large plates. Unsure how big the plates were we ordered two small plates and two medium plates. It was too much food. Of the four dishes we had, we really enjoyed the curry we ordered but were confused and underwhelmed by the others. Our biggest disappointment was to find out that they don’t have boxes and let you take your leftovers. We sat longer and forced ourselves to eat more food and eventually left too full to be comfortable.

On our way back to the hostel we decided to stop by two more laneways and look at the street art; AC/DC and Duckboard Place. These were two of my favorite laneways, mostly because the artwork wasn’t painted over by regular graffiti. 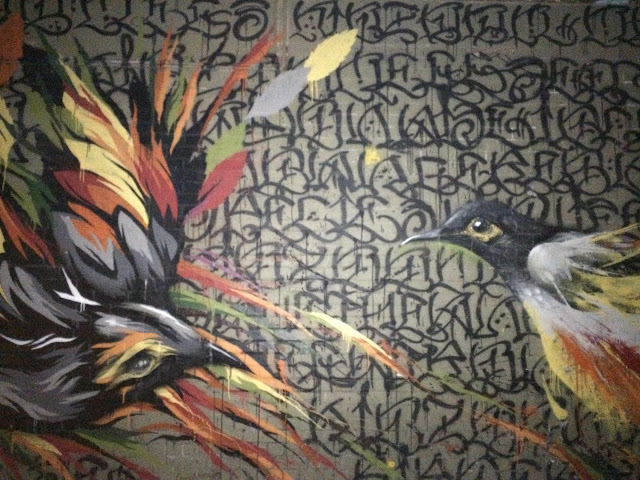 On Thursday we were leaving Melbourne for Geelong, but we had some time to kill before picking up our rental car. We checked out of the hostel after eating breakfasts there. Because we had our bags with us, we didn’t do any sight seeing. Instead we spent some time in a coffee shop and then used the free trams to make our way to the rental car company.

Our local friend sent us a great list of things to do in Melbourne. Here is his top 10 list.

One extra: The Great Ocean Road, which we did but which is included in our Geelong post. 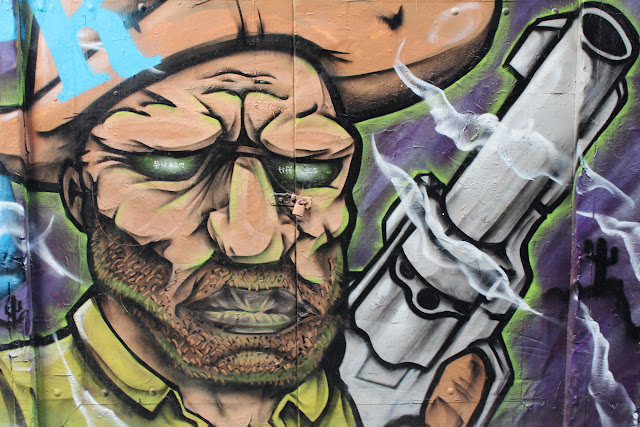 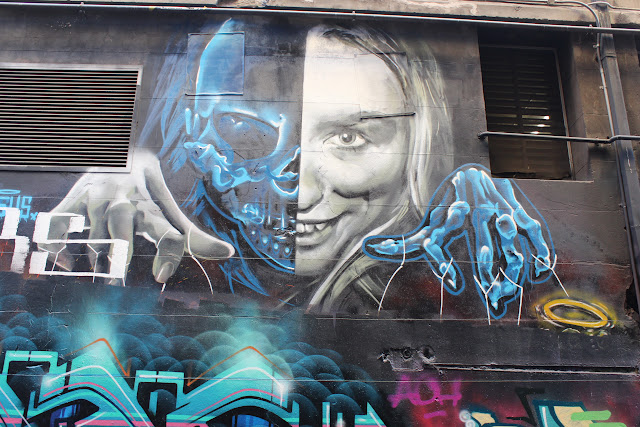 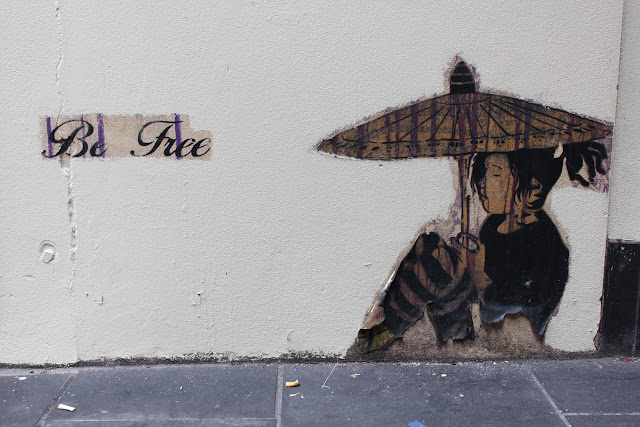 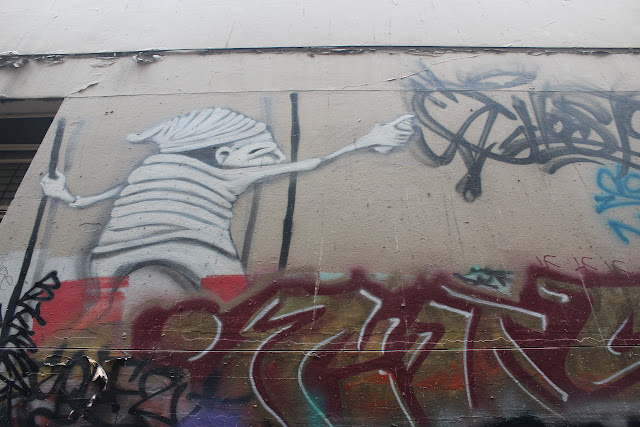 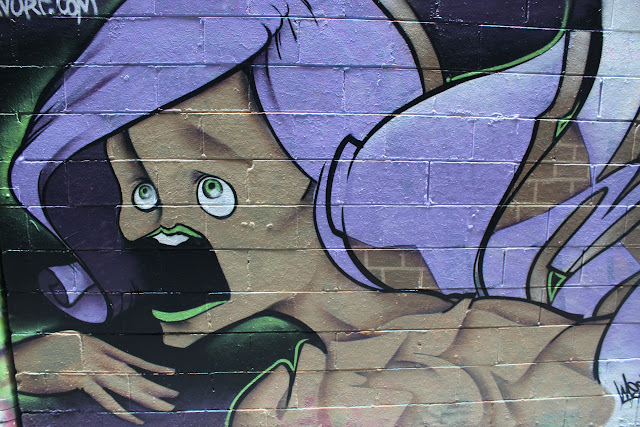 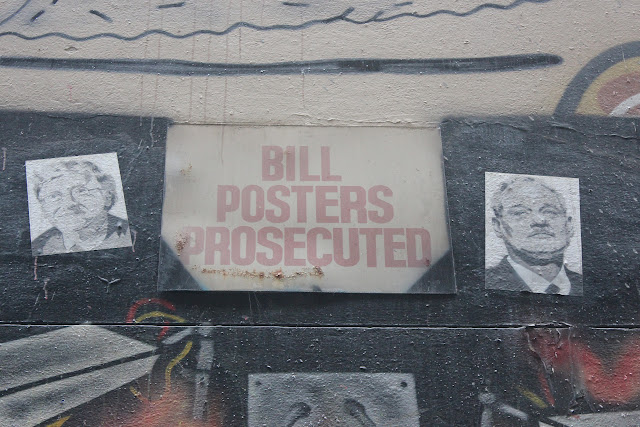 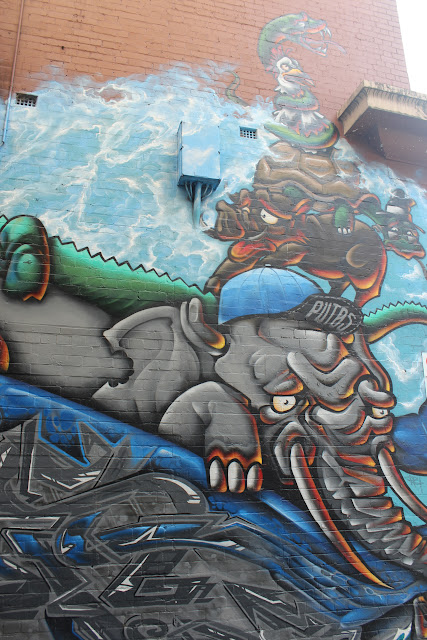 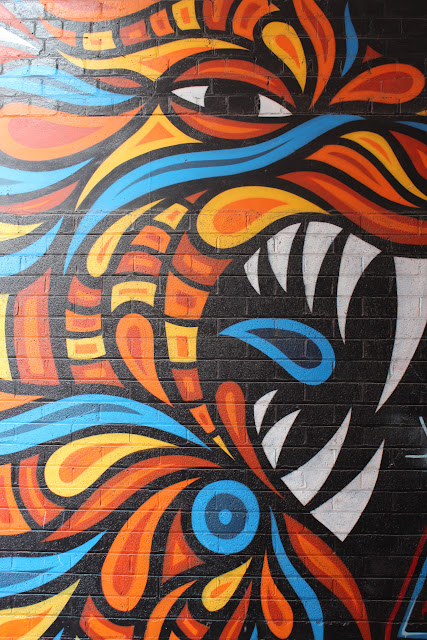 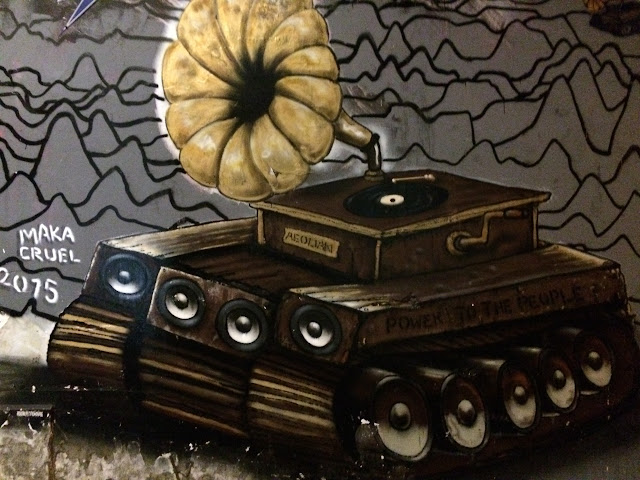