It’s finally time to start taking about our around the world travels (RTW). Before we get to the good stuff, here is some information regarding our experiences traveling to southeast Asia to start the trip.

We flew out of Dulles International Airport in Washington, DC at 8:30pm on Saturday night on Qatar Airways. We did not check luggage, so Jon and I each had a 30 liter backpack and a computer bag which were stuffed to the rim. (A packing list is coming shortly! Check back). 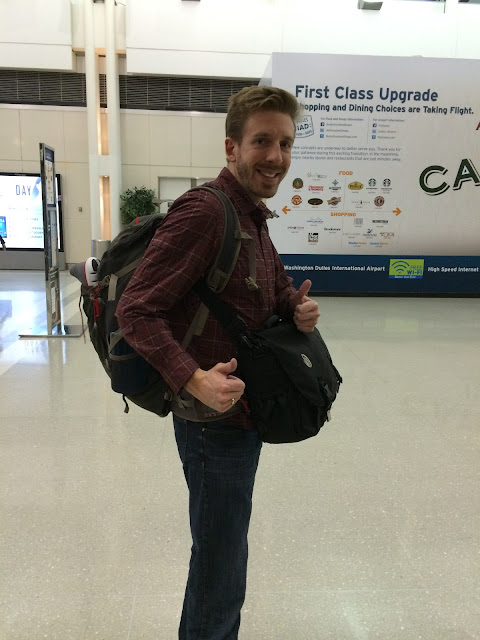 Our time in the airport went just about as smooth as you could want. Check-in went quickly because we were directed to a separate counter which was taking the overflow of the long lines at Qatar Airways ticket counter. This quickly took us from about 30th in line to 3rd. There was no line at all in security, and our only hold up was that Jon’s laptop bag flagged on the x-ray. The TSA officer who opened the bag quickly unrealized the image in question was actually a camera battery sitting on top of a thick guidebook. I asked one TSA guard if it was always this busy, and she told me on Saturdays at 6pm it is always empty but come 8pm they would be swamped.

Our boarding was delayed 15 minutes, but that is a non-issue for us. By the time our seats were called, in the third group to board the plan, the line to board was already long. Once again we got lucky when an employee directed the latter part of the line to the preferred flyer check-in to ease the line congestion. We had no problem finding overhead space for our bags. Our flight wasn’t full either, so even though our row was full, a lot of middle seats were left empty and the overhead luggage compartments never filled up. 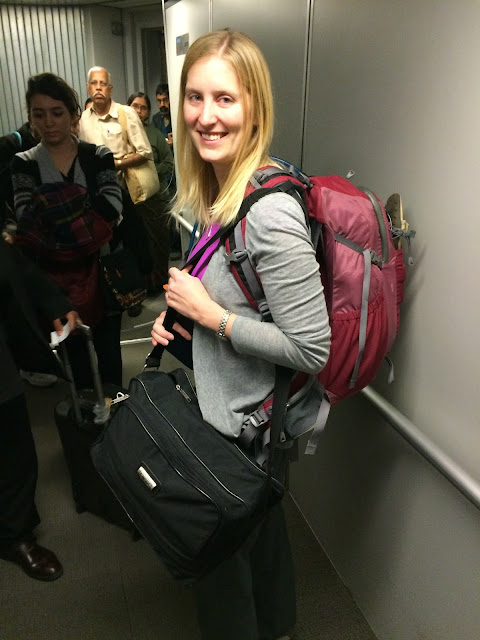 Jon and I have flown on Qatar Airways once before, and really enjoyed the experience. This time was similar although for me not quite as good, however I’m not sure why. Each seat on the plane had a pillow and blanket on it when we boarded. In the seat back pocket were three magazines (Qatar airways, a movie guide, and a duty free shopping guide), headphones, and a toiletry pack with socks, earplugs, a toothbrush and paste, and an eye mask. 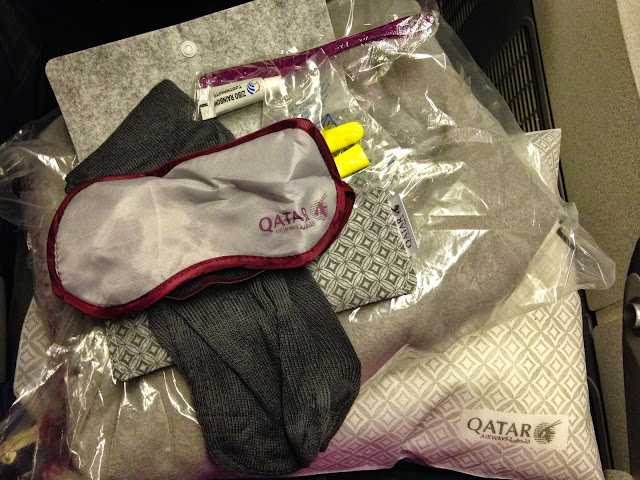 The plane took off unremarkably. Around 9:30pm, dinner was served. We each had a choice of lamb with rice, chicken with potatoes, or vegetarian. Each meal was accompanied by a roll, cold rice/bean/corn salad, and some type of jello dessert. Jon and I each had the lamb. The plating a D+ by restaurant standards, but a B+ by airplane standards. The lamb itself was served with rice and lentils and was very good! I enjoyed the main dish a lot. The accompaniments were palatable but not as thrilling. The meal also is served with water and a drink. The drink included a choice of complementary cocktail. 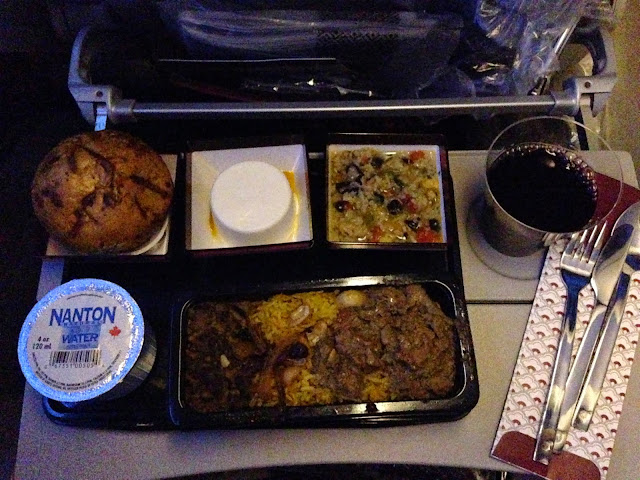 After eating we turned our attention to the on board movies. Each seat has its own TV offering lots of movies, TV shows, games, and flight information. Jon watched Godzilla while I watched The Skeleton Twins. Before we knew it, it was midnight and we could not keep our eyes open. Sleeping on a plane is never easy for us. Jon slept better than he expected. I slept a bit, but not as much as I wanted. Soon we were woken up for snack time and each given vanilla ice cream and a tuna sandwich. The ice cream wasn’t Ben and Jerry’s, like we had on a Qatar flight four years ago, but it was really good and felt great on our dry throats. We napped some more, and once again were woken for food. This time breakfast. The choices were chicken and rice or eggs. We both had the eggs, which was actually eggs with cheese and mushrooms in it, a sausage link, and potatoes. The meal was served with a fruit cup, orange juice, a roll, and yogurt. There was no shortage of food on this flight. 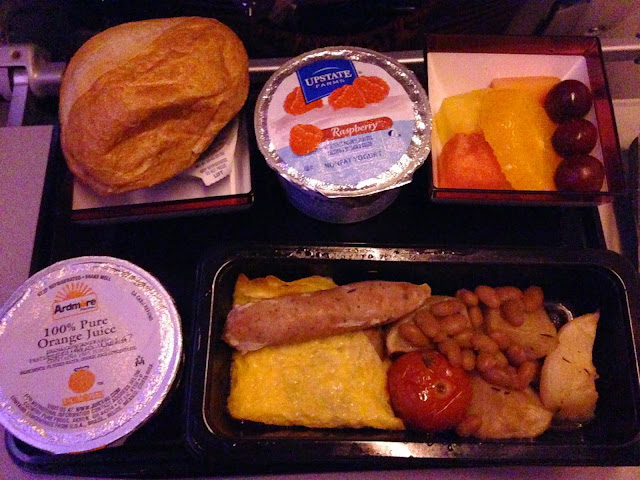 We waited out a four hour layover in the Hamden International Airport in Doha, Qatar. Qatar’s airport wasn’t a bad place to have a layover. Shopping in the airport (international terminal) is mostly luxury duty free shops like Chanel and Rolex. The airport does have free wifi and an abundance of secluded nooks with comfortable chairs to relax in. 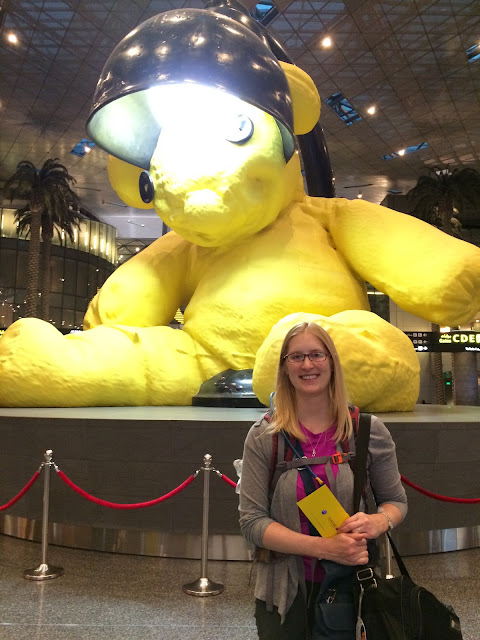 Our next Qatar flight was even less eventful than the first. We were served a meal of beef or chicken with another mousse like dessert and cold vegetable salad, watched a movie, napped, and then were given a hot panini made with some vegetable spread and an apple pastry.

Our next layover was in Bangkok for 7 hours. We were transferring to a flight to Cambodia (also international), so we didn’t think we’d have to leave the terminal. After killing a few hours listening to podcasts and receiving conflicting ticket information from several airport employees, we finally realized we had to leave through immigration just to get our tickets and re-enter. Luckily, immigration didn’t take long at all.