Retro Trip Post: As we prepare to leave for our backpacking trip across Asia, I’ve been reflecting on our past trip to Thailand. Because the world is such a large place, we are planning to bypass most of what we’ve already seen before when we visited Thailand in 2011.

The first destination on our 2011 trip was to the island of Koh Samui, located in the Gulf of Thailand, where attended the wedding for our friends. 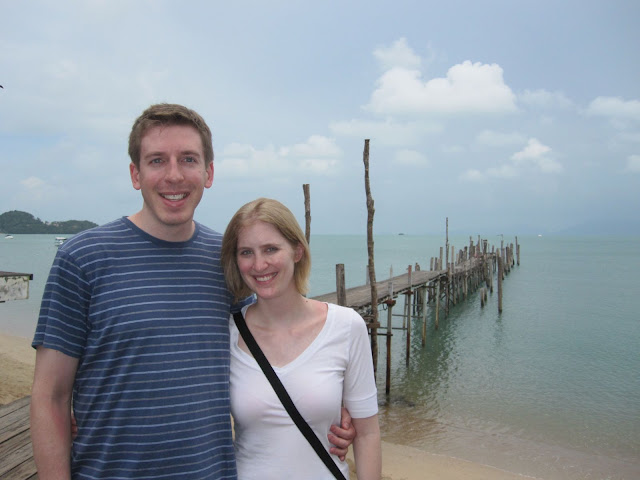 We left our hometown of Washington, DC late on the night of Friday March 11. There are very few direct flights to Thailand and so we had a layover in the middle east. To give you an idea of how long it typically takes to reach Thailand by air, we arrived Sunday, March 13 (2 days later) when you account for the airtime, layovers, and time zone changes.

In order to reach Koh Samui, we first flew to Bangkok and then transferred to a domestic airline. Our flight to Thailand was on Qatar Airways and I cannot say enough good things about flying with them. Even though we flew coach; each seat was given a blanket, pillow, and bag of toiletries including earplugs, a toothbrush and paste, and an eye mask. Several meals, which were good by airline standards, were served including snacks such as Ben and Jerry’s Ice Cream. We could not remember ever eating so much on an airplane before. Lastly, each seat had a TV with a wide selection of movies, some still in theaters. We did have one layover in Doba, Qatar, but didn’t leave the airport.

In Bangkok, we had to claim our luggage and leave through customs before joining our departing flight to Koh Samui on Bangkok Airways. I don’t remember very much about this flight. I do remember being impressed by the traditional looking statues in the Bangkok terminal. I also remember enjoying a lounge for Bangkok Airways customers which included snacks. 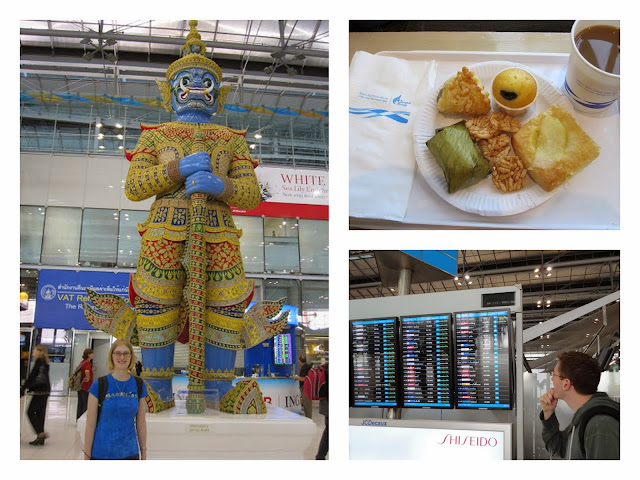 Bangkok Terminal and Snacks from the Bangkok Air Lounge.

At 11am (local time) we arrived in Koh Samui. The Koh Samui airport is a small open air structure comprised of pavilions with thatched roofs. The air was hot and humid. The first impression that the Koh Samui airport leaves with guests is one of paradise and was a lovely welcome to the country. 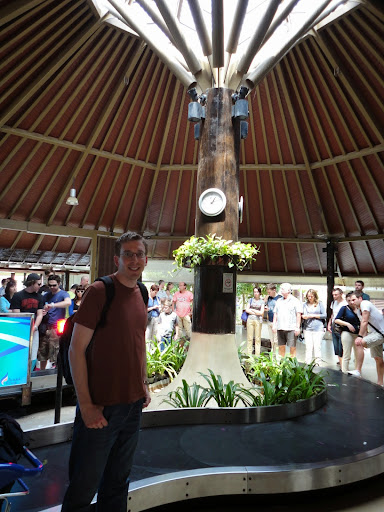 Because we were in Koh Samui for a wedding, we stayed at the resort where the bride had blocked a group of rooms for guests. This hotel was The Anantara Resort. Transportation to the resort was a taxi which we hired at the airport. The resort looked gorgeous, just where you want to stay while on a tropical island. We were greeted by the resort staff with damp towels for our faces and cool juice drinks. After 2 days traveling, you would note believe how nice and accommodating this was. Because it was 11am, our room wasn’t ready, but the hotel watched our luggage and let us change clothes and go lounge by the pool where we found several of our friends who also were there for the wedding.

The resort and its grounds were great, beach front property along Bophut Beach. You could lay on beach chairs in the sand, or stay poolside and still have a view of the ocean. The property was speckled with hammocks and pagodas for picnics or shady retreats. 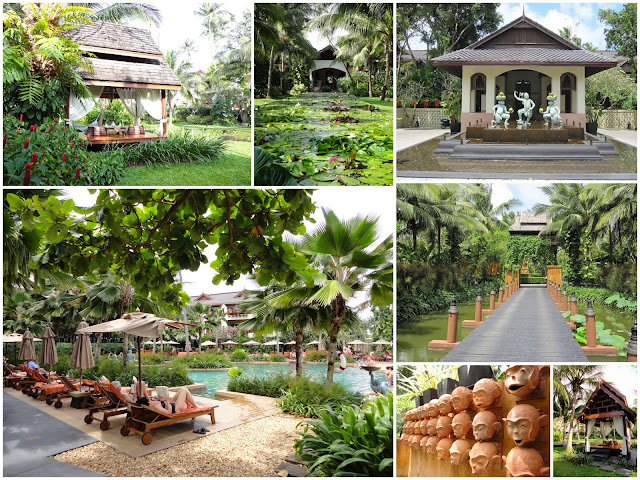 That afternoon, we relaxed and had food and drinks by the pool. By evening, we cleaned up and walked down the beach a few blocks to Fisherman’s Village. Fisherman’s Village felt very much like a boardwalk; it was a single street lined with shops and restaurants. Being our first night in Bangkok, we wanted Thai food. Our friends who were living in Bangkok at the time ordered a large family style meal with their favorites for the table to share; papaya salad, chicken curry, a whole fish, pad thai, and lots more. I remember sitting on a second floor patio above the beach and seeing Chinese Lanterns float up in the air and our over the ocean.  By the end of dinner, we were so tired from our traveling, that we returned and immediately got some much needed sleep. 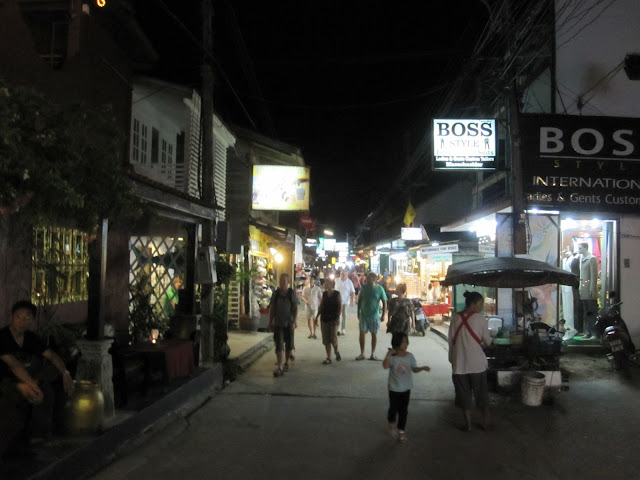 The next day was the start of wedding activities, bachelor and bachelorette parties for the guests. We ate breakfast at the hotel, which provided an elaborate buffet every morning.

The boys set off early for a day of golfing at the Santiburi Championship Golf Course. The golf course was on a mountain in the middle of the island, which offered many amazing views of the sea.  Each of the guys was required to have their own caddie. 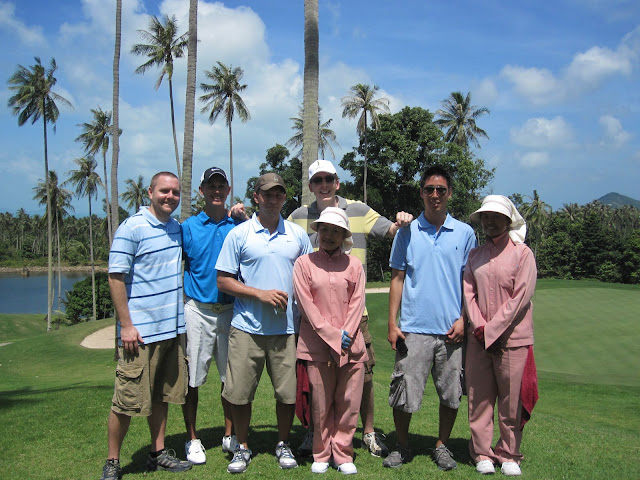 The girls had a little more time to enjoy the hotel. At 10am, a boat pulled right up to the beach to pick up the girls for a day exploring the Angthong Marine National Park (also called Mo Ko Ang Thong). We started with a ride on the speed boat that took about 45 minutes. The park is comprised of over 40 green and rocky islands. We needed one island and were given snorkels and allowed to swim around. I don’t remember many specifics, but always enjoy snorkeling. I’m fairly certain that the water wasn’t cold and was easy to float around in. 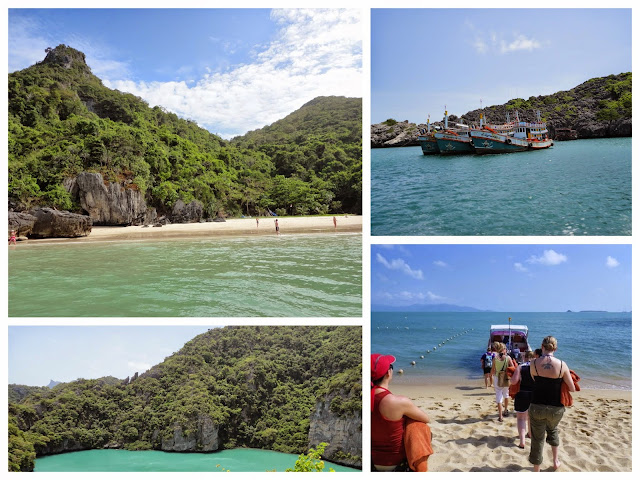 The boat next took us to Talay Nai Lagoon on Mae Koh. Talay Nai is located on the interior of an island. A small beach with restrooms and a snackbar was by the boat docks. A flight of stairs took us high up and over the hills and set us back down just above the surface of the lagoon. The view in both directions, inland to the lagoon and outward to the sea, were beautiful. For lunch the boat took us to a small open air restaurant, Ko Phaluai Sea Food. Again we had a family style meal that was more like a feast with salads, rice, kabobs of chicken and fish. 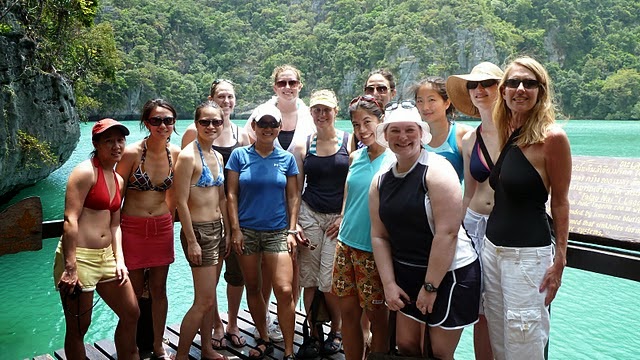 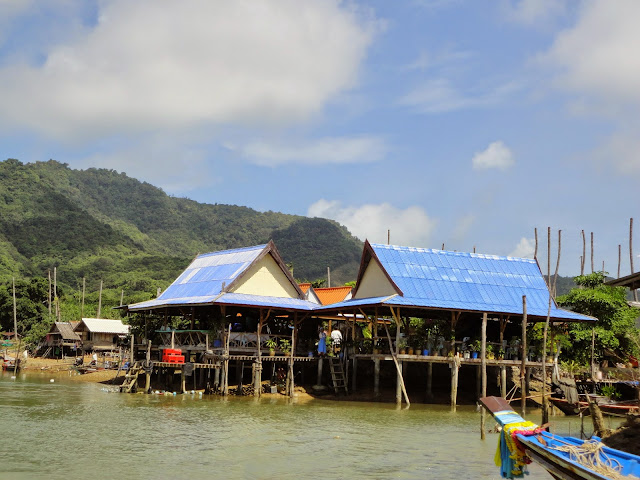 While the wedding party was busy with the rehearsal, we had the morning free to do what we wanted. For us this meant exploring the island. As a lucky coincidence, one of our friends who was also a wedding guest had an aunt living on Koh Samui and was able to borrow her mini-van for the day. Our first stop was to the Big Buddha Temple, Wat Phra Yai. Big Buddha is a large, gold statue of buddha that sits on a small island off the cost of northern Ko Samui. Although it was just built in the 1970’s, Wat Phra Yai is what western tourists want to see; an impressive eastern style statue watching over a small piece of paradise. From there we drove to Wat Plai Laem, another temple complex. Wat Plau Laem had several small temples, as well as two large statues. One of a laughing Buddha and the other of the many armed Guanyin. 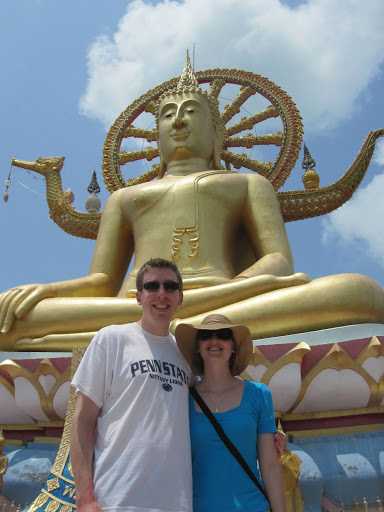 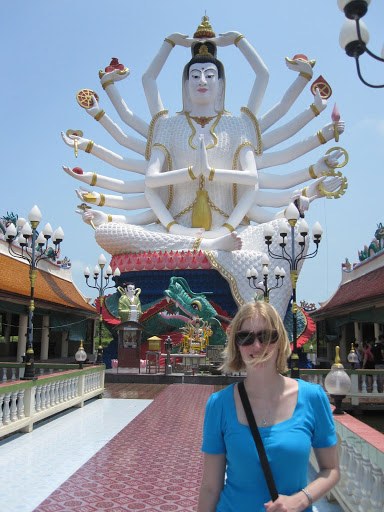 For lunch we ate at the Green Parrot in Chaweng and then visited our friend’s aunt whose car we were borrowing. Our friend’s aunt owns a pottery shop, Boonchoo Ceramic, and it was a great place for us to pick up a few souvenirs.

After lunch we returned to the hotel for a little pool time and to get ready for the wedding. In the afternoon a shuttle bus picked us up to take us to the Six Senses resort for the wedding. The Six Senses is one of the nicest (and expensive) resorts on the island, and probably in all of Thailand, which is probably why the bride and groom offered the Anantara as an alternate for guest rooms.

The wedding was outdoors on a wooden deck overlooking the ocean. The ceremony was lovely. A cocktail hour followed, which was on another wooden deck, but this time just above an infinity pool before the ocean. Tropical drinks and appetizers were passed around. Dinner and dancing were in an nearby open air restaurant on the Six Sense’s property. Dinner was served buffet style and featured tons of authentic Thai food. The weather cooled down in time for dancing. Unfortunately this was also the first time all trip my jetlag and exhaustion were starting to catch up with me. 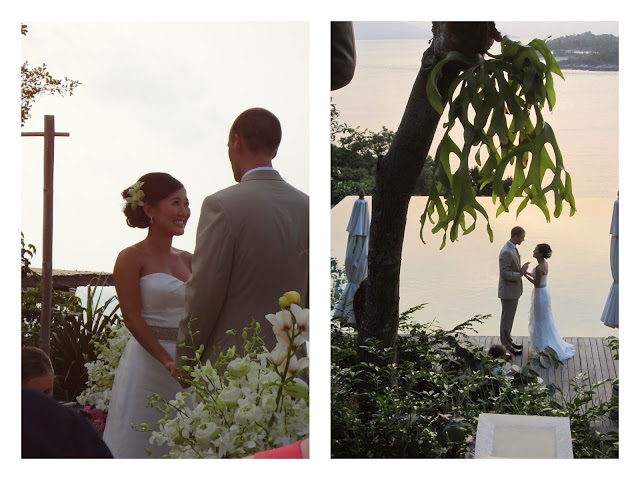 Wednesday was our last day on Koh Samui. The wedding couple hosted a brunch at Anantara so everyone could say goodbye. The brunch was held in a restaurant overlooking the pool area. That afternoon we mostly stayed at the resort pool. We also walked back into Fishman’s Village to see it during the day. 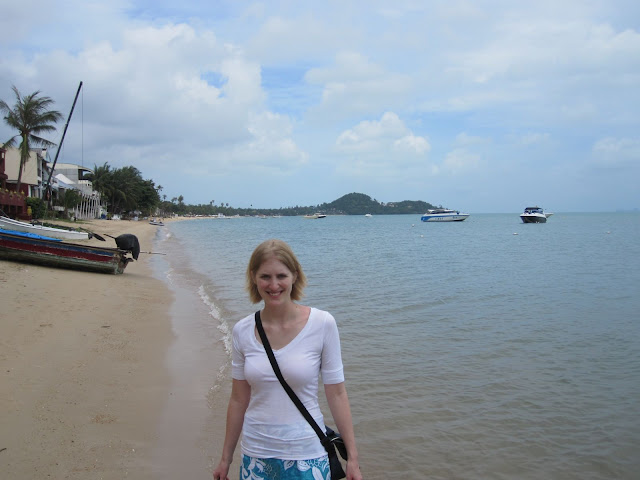 Merchants pedaling souvenirs, tours, and boat rides often walked past on the resort beach. Jon and two friends decided to hire a jet ski for a while. The boys, riding together were amazing to watch as they tried to make sharp turns to throw their passenger off of the jet ski, often resulting in everyone splashing into the water. 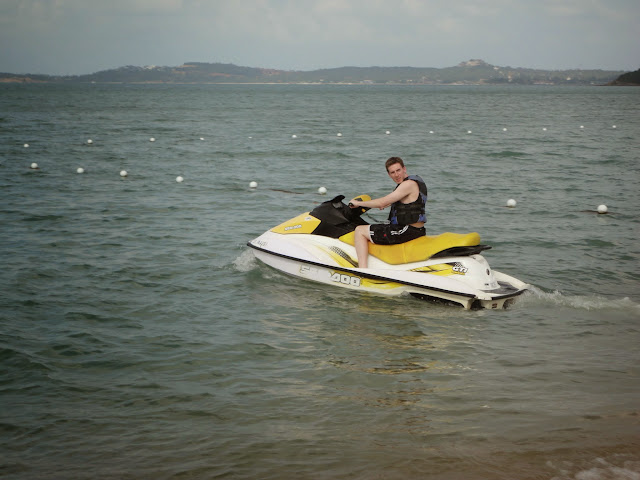 For dinner a large group of our friends ate at Sabeinglae on Lamia Beach. Once again we ate family style, which is probably one of the best ways to experience many Thai dishes at once. 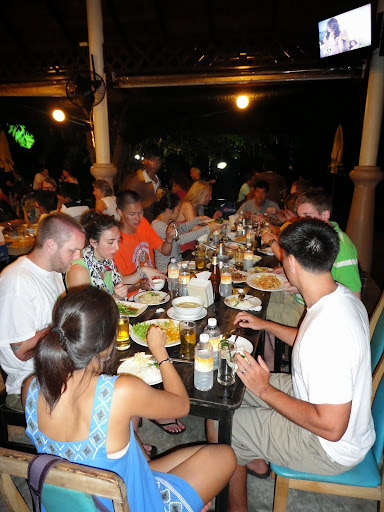 Thursday morning it was time to leave Koh Samui. The bride and groom graciously forwent a traditional honeymoon and instead invited many of us to travel with them to Chiang Mai for the next few days. We said goodbye to our friends who would not be continuing on, and took Bangkok Airways to Chiang Mai for 3 days of activities including elephant riding and hiking in a national park. 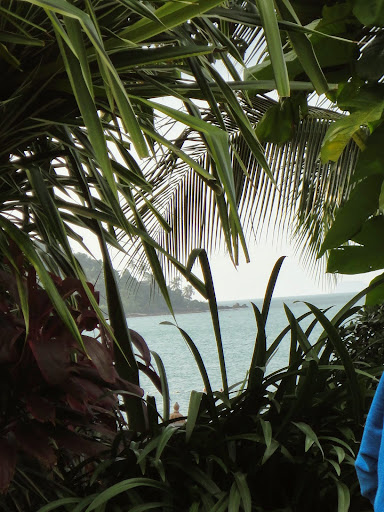 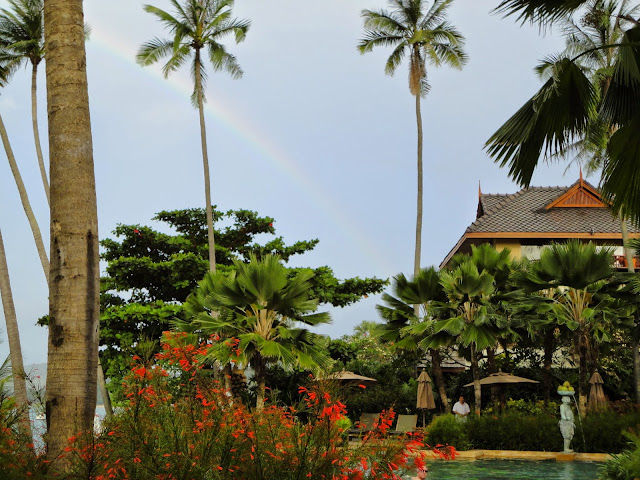 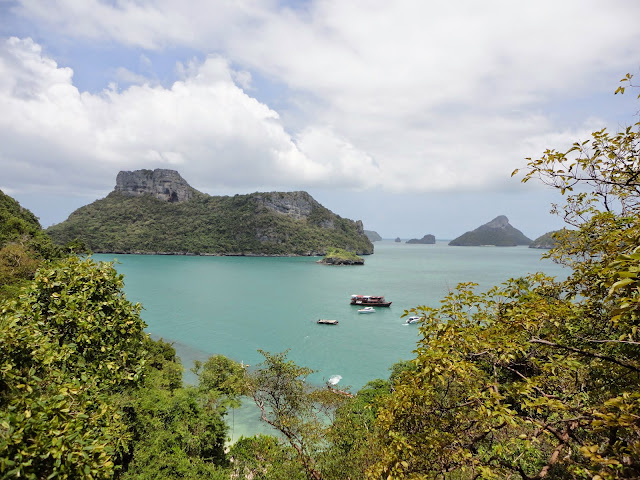 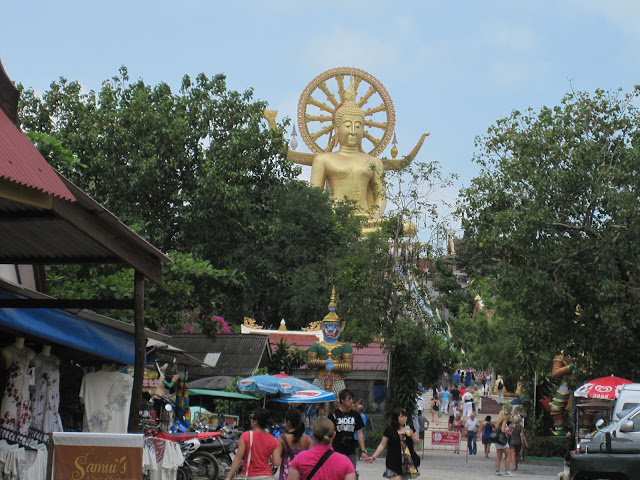 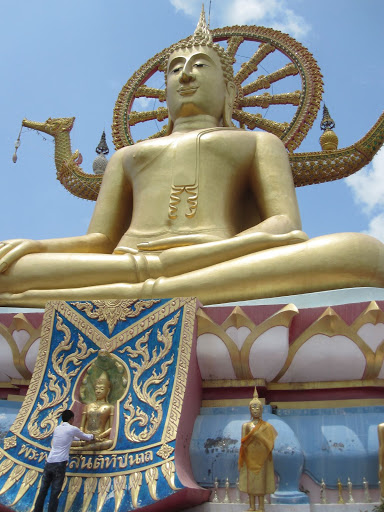 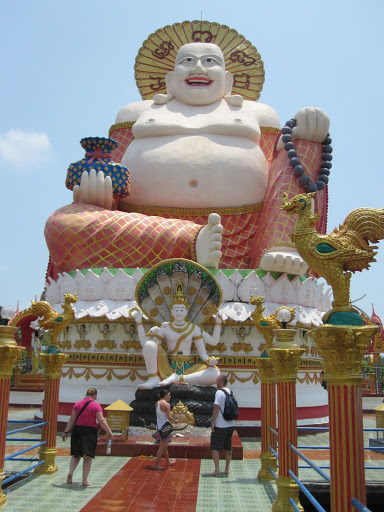 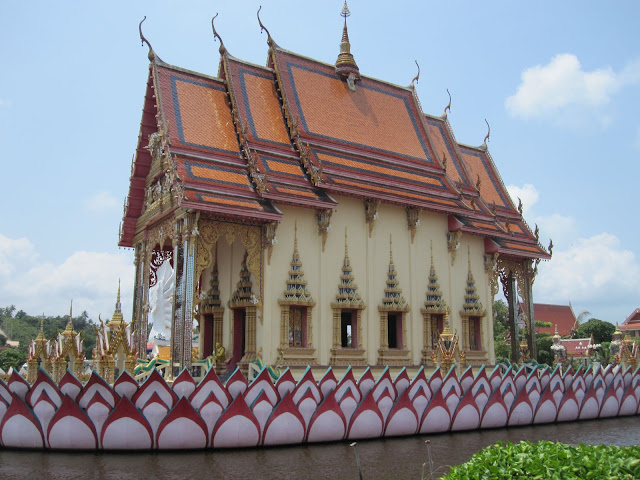 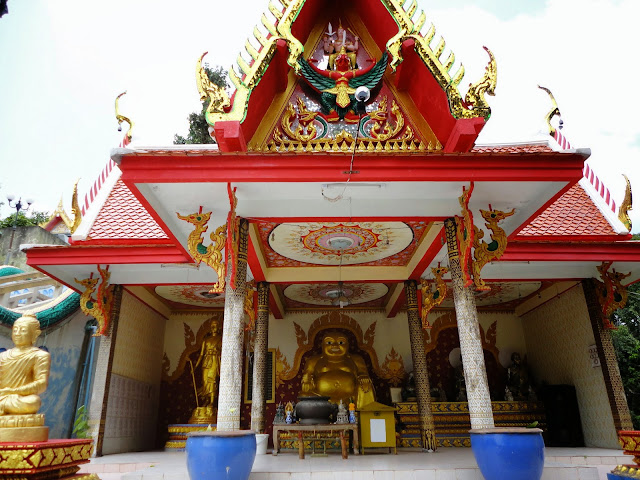 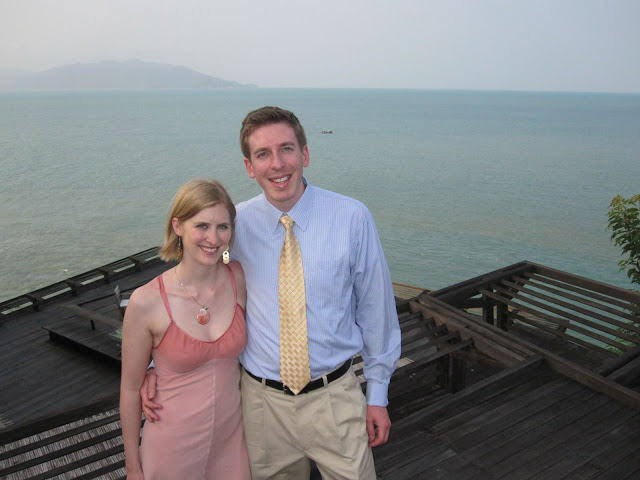 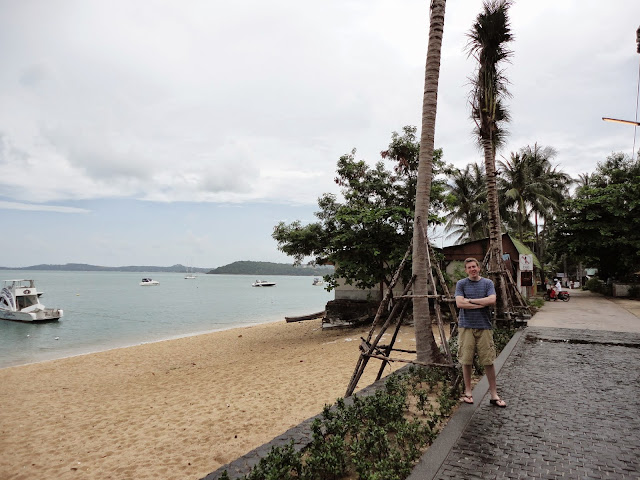