San Digeo was our last stop on the West Coast which made it a little bittersweet. Luckily we had a great time with friends who went out of their way to show us the city.

We arrived in San Diego Friday evening just as our friends were getting home from work. In San Diego we stayed with Jessie and Payman, Alexis’s college roommate and the same couple whose wedding we previously attended while in Sonoma. Once again we found ourselves with amazing hosts and tour guides to the city.

For dinner Jessie and Payman took us to the insanely popular Pizza Port. Pizza Port is a brewery and pizza restaurant, the common thread being that yeast is the primary ingredient in both. Pizza Port is what Jessie considered quintessential ‘San Diego’, a brewery and family restaurant with kids running around under the watch of beachy, surfer parents. Pizza Port has a large selection of beers that are brewed in a microbrewery that can be seen though large windows in the restaurant. We enjoyed both our pizza and beer. I personally really liked the pizza crust which was soft, gooey, and a bit sweet.

After dinner we went out to Oceanside to walk the pier and have a drink. Oceanside is a neighborhood on the water north of San Diego. Recently several craft breweries have started opening up in Oceanside. We went to Masters which was new to Jessie and Payman. The boys got pumpkin beers while Jessie and I each tried a unique cocktail. 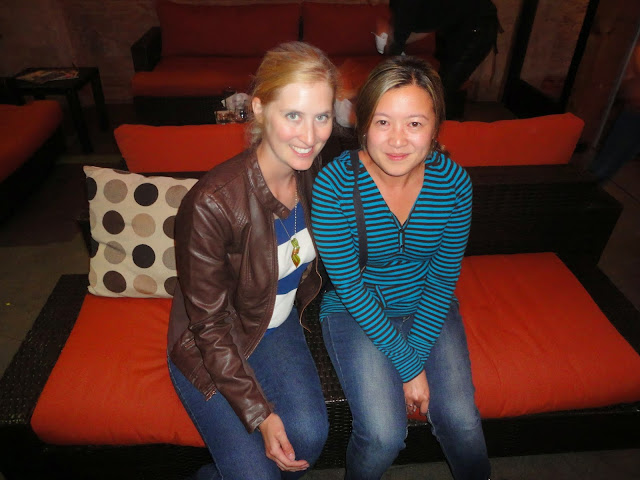 On Saturday, Jessie and Payman showed us tons of their favorite spots and neighborhoods in San Diego. The morning started with a great home cooked breakfast, and then our first stop was Coronado Island. Coronado is a peninsula off of the San Diego coast known for its navy base and hotel. The island also has some parks with great views of the San Diego skyline. We stopped at the first park after the bridge, Coronado Tidelands Park, to take some photos and to watch the navy boats go by. 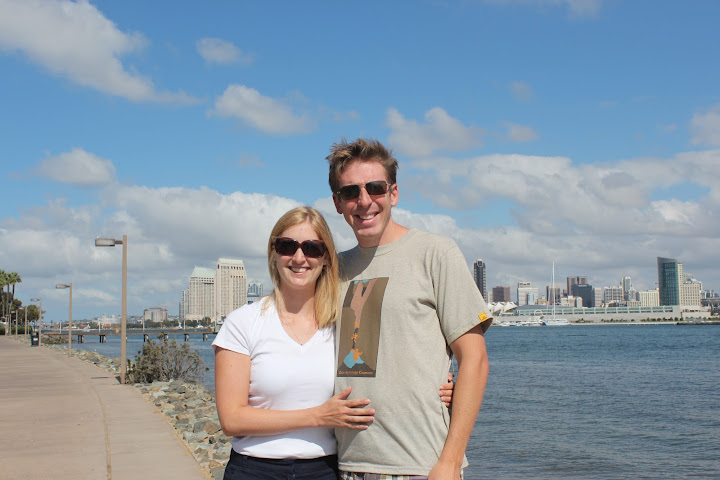 As we drove further onto the island I was surprised to see how residential it was with grocery stores and schools. Our next stop was Ferry Landing. The Ferry Landing Market place was a cute area of coffee and souvenir shops and was nice to walk through on our way to another view of the San Diego skyline. Before leaving the island we made a final stop at the Hotel del Coronado which is known for hosting many politicians and celebrities. 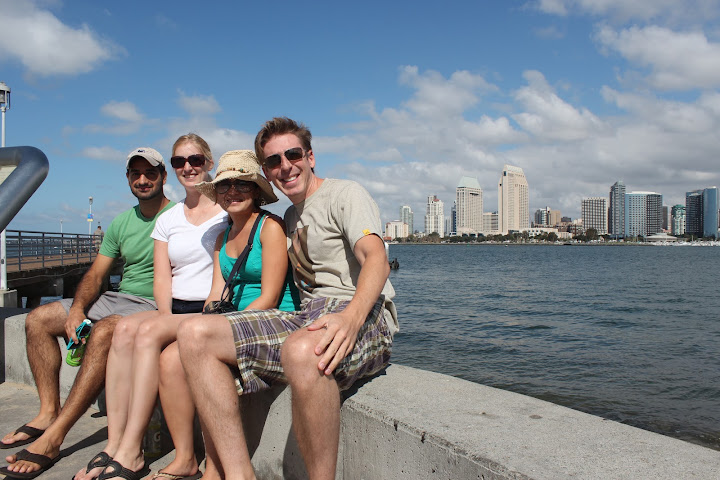 As we worked our way north from Coronado we stopped in Balboa Park. Balboa Park is San Diego’s answer to New York’s Central Park. Balboa Park is home to the San Diego Zoo but also to many other museums located near the El Prado area of the park. The buildings have a beautiful Spanish style-architecture, which we enjoyed walking around even though we didn’t have the time to go into the museums. 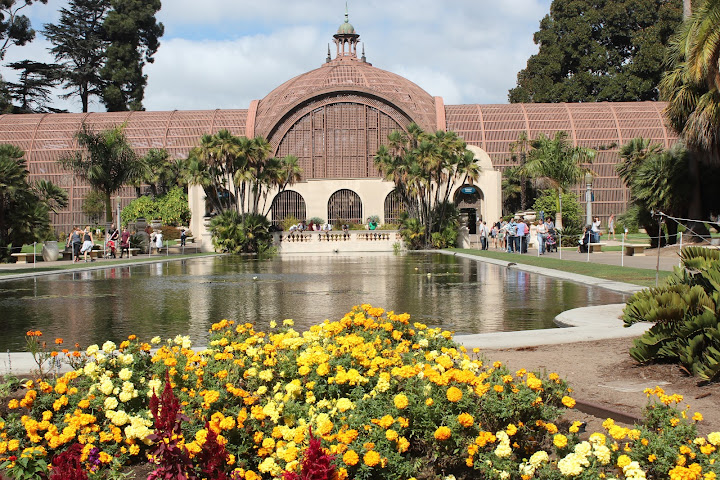 From Balboa, Jessie and Payman took us to one of San Diego’s most popular local taco shops, Oscar’s. Oscar’s Mexican Seafood is a small restaurant counter in Pacific Beach (although they have a few more locations now). When we arrived the street outside Oscar’s was crowded with people waiting for their orders and eating. We each ordered the taco especial and ceviche. It was good, messy food. 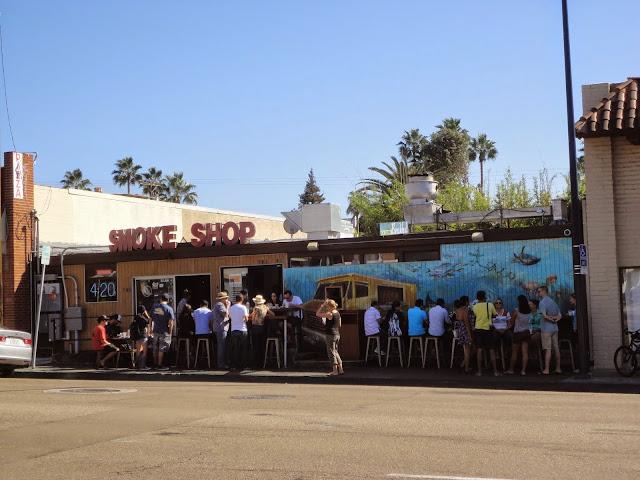 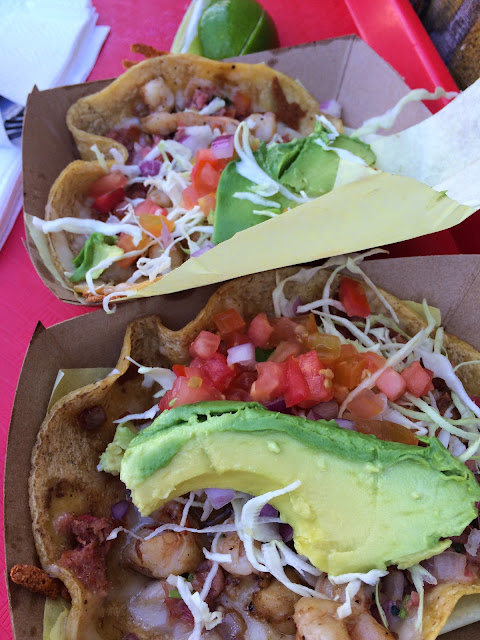 While we were there, my other friend Meghana met up with us. Meghana invited us to her condo and showed us around the Pacific Beach neighbor and pier. We all grabbed a drinks at Bare Back Grill which was a New Zealand themed bar. 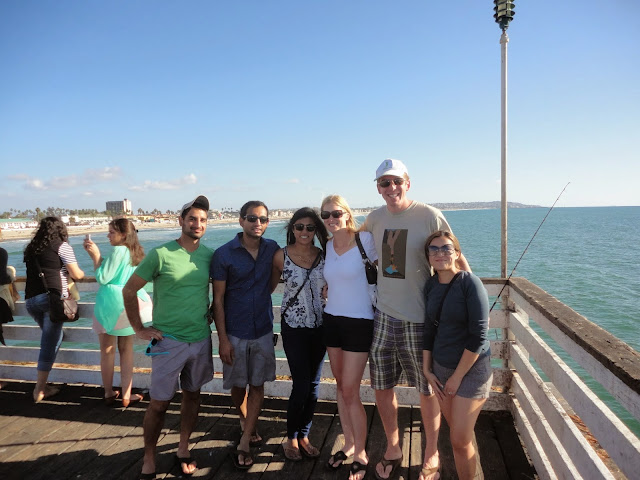 Everyone at Pacific Beach Pier

We said goodbye to Meghana we continued our tour northward stopping at Soledad Park. From Soledad Park you can view most of the La Jolla beach and city. After seeing La Jolla from above, we drove down to it. La Jolla is a very nice beach town with upscale shops and restaurants. The La Jolla Cove is known for its sea lions who lay out on the shore (and you can smell them throughout the town). We walked down to the cove and had fun taking photos. We were surprised to see a lot of people climbing down and getting precariously close to the sea lions… so we did the same. We also walked around Scripps Park looking at the tide pools where we saw trapped fish, crabs, and a sea anemone. We walked back to our car through the streets of La Jolla window shopping at the art galleries. By the time we left the sun had gone down so we headed back to Jessie’s and Payman’s house. 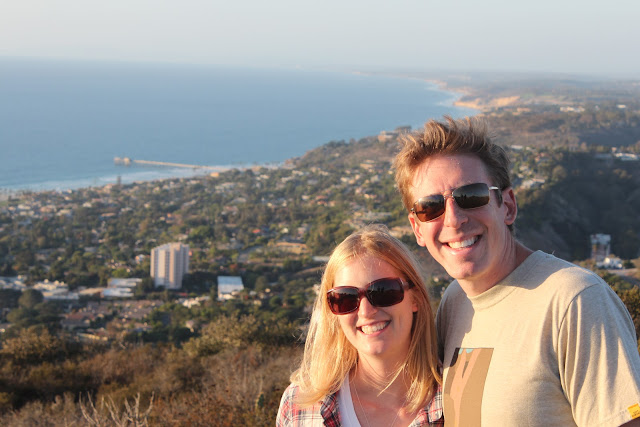 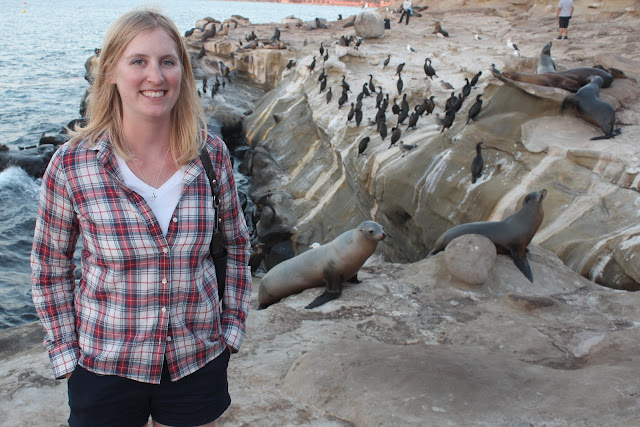 At home Jessie and Payman cooked a wonderful dinner for us of Kabab koobideh (a Persian kabob) on the grill with rice and salad. After eating we got a bottle of wine and sat in their community hot tub.

We returned to the house and cleaned up for brunch. For brunch we drove to the Solana Beach neighborhood and ate at Claire’s on Cedros. Claire’s was popular and we had a short wait before being seated in one of the shady outdoor areas. Everyone enjoyed their meal. Solana beach has a Sunday Market so we walked around the vendors for a while and then went to the Solana Beach. On the beach Jessie and I sat around catching up while the boys braved the water and very big waves a few times. When we had enough sun we stopped quickly in Culture Brewery’s tasting room for a flight of 5 beers. None of us were impressed with the beers, but we enjoyed the Solana beach location. 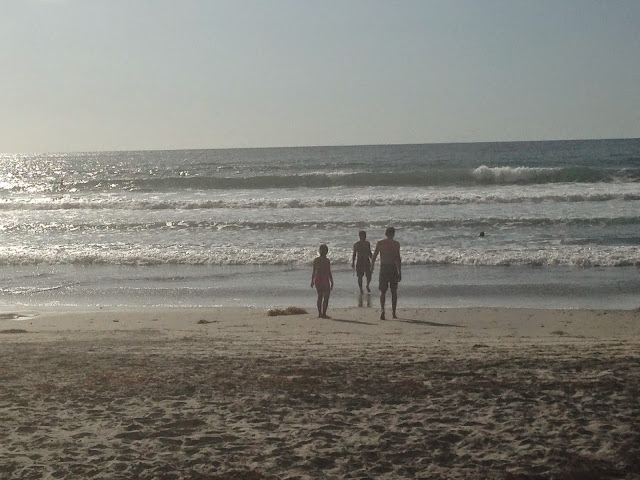 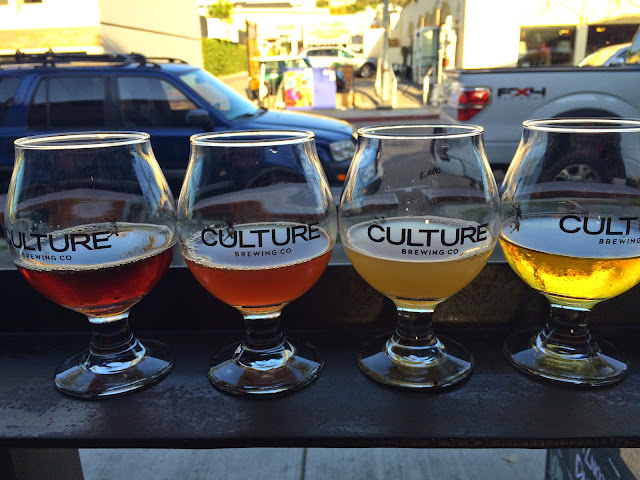 For dinner we wanted to try Stone Brewery. Stone had been recommended to us by several people including Jon’s cousin. Meghana met us at Stone and it was one of the nicer restaurants we ate at in San Diego. The brewery is in a large industrial building and very reasonable priced tours and tastings can be done earlier in the day. One side of the building is their restaurant and that is where we went. The restaurant was very impressive to me, a large room with a few very cool but simple features like granite stones (get it?) with fountains built around them and large glass garage doors that open to the outdoor seating. On one side of the restaurant are big windows letting you look into the brewery. The beers Stone makes are mostly IPA’s and Porters (so be warned if you don’t like those) but they also have a large selection of other local beers. Our meals were a mixed bag. I found my salmon to be underwhelming with a sad portion of vegetables accompanying it. Likewise, we found the duck tacos to be small for their price. However the brisket Jon ordered was very good and became a favorite with most of the table. After dinner we walked through the outdoor seating area which is also very well decorated and laid out with rock and water features. 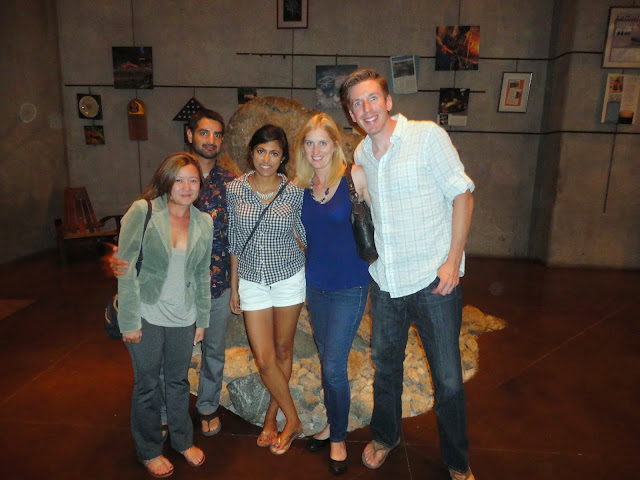 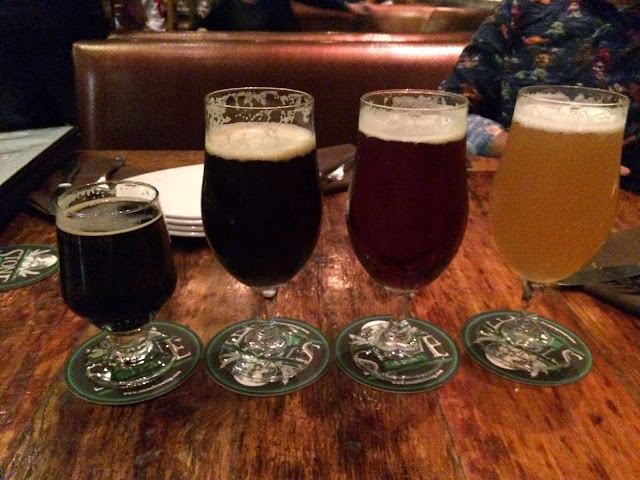 Monday was our last day in San Diego and on the west coast! Jessie and Payman still had a lot of ideas of what sites we could see, so when we left their house we drove to Old Town. Old Town San Diego is ‘little Mexico’. We found very walkable streets with spanish-style architecture filled with taco restaurants, candy shops, and souvenir stands. In the center of Old Town is a State Historic park. First we met Meghana for lunch. Not sure where to go, we ended up at Los Locos where I had a very large portion of catfish po’boy and Jon had tacos which didn’t quite live up to Oscar’s two days prior. Then we walked around the historic park which features restored pueblos. After saying good-bye, Jon and I left the west coast headed for Arizona. 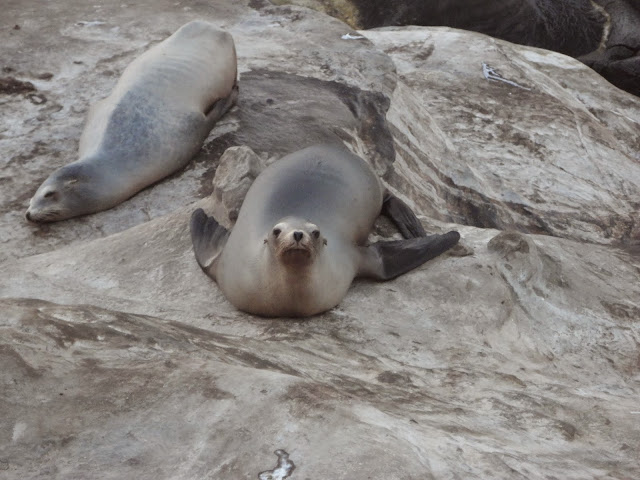 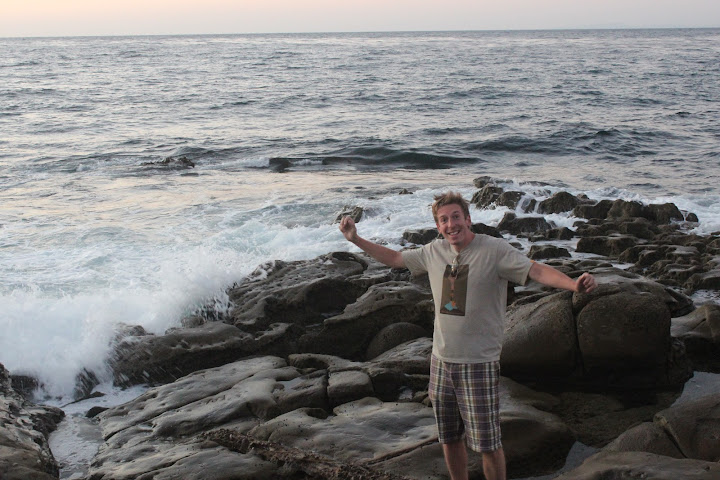 Playing in the tide pool 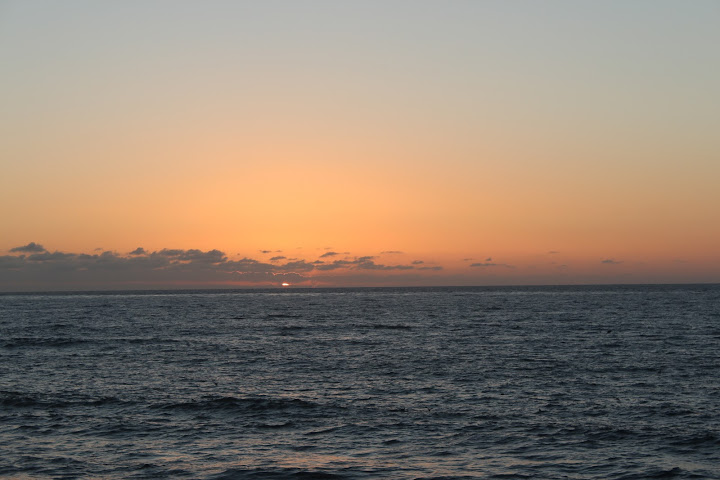 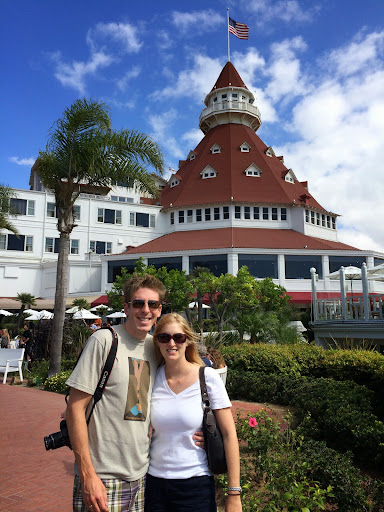 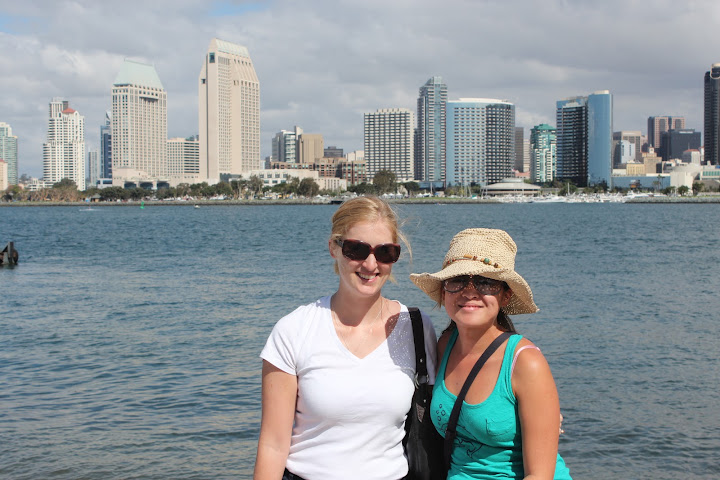 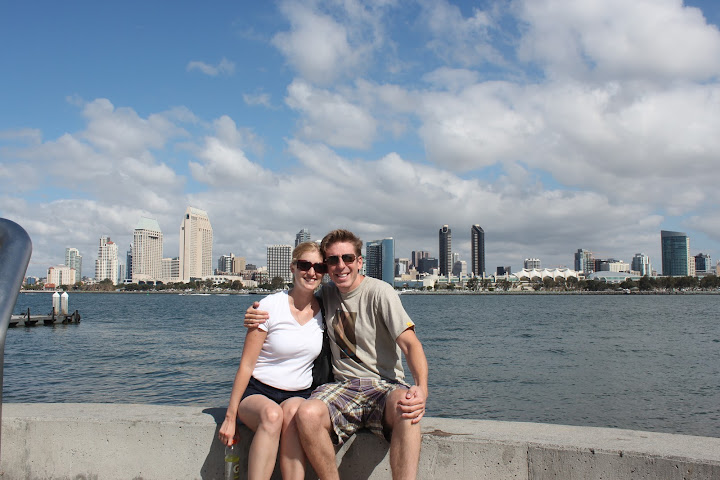 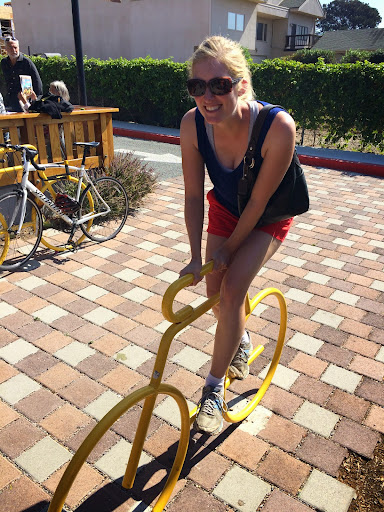 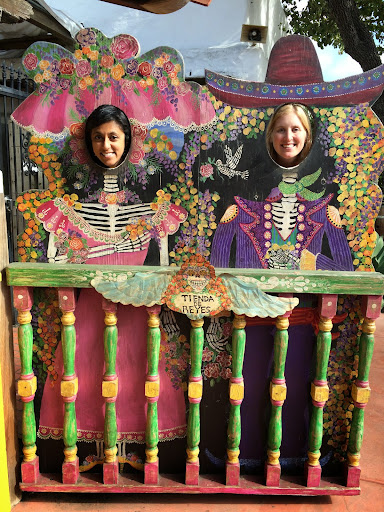