From Riverton we drove straight to the Grand Tetons. The road takes you through the Shoshone National Forest and along the outskirts of Grand Teton National Park where there are several scenic overlooks. We stopped to buy some food for lunch and then entered the park. Our first stop inside of the park was the visitor’s center where a park ranger showed us how to correctly use bear spray. Then we drove to the ‘Climber’s Ranch’ to see if they had any room for the night. 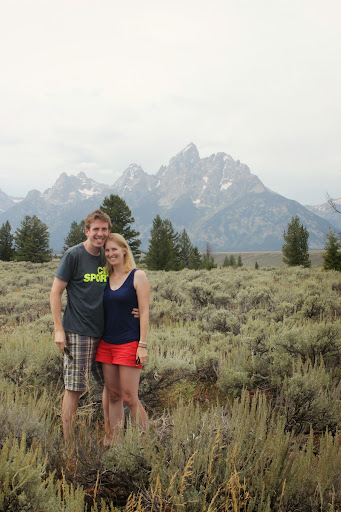 Our first view of the Tetons 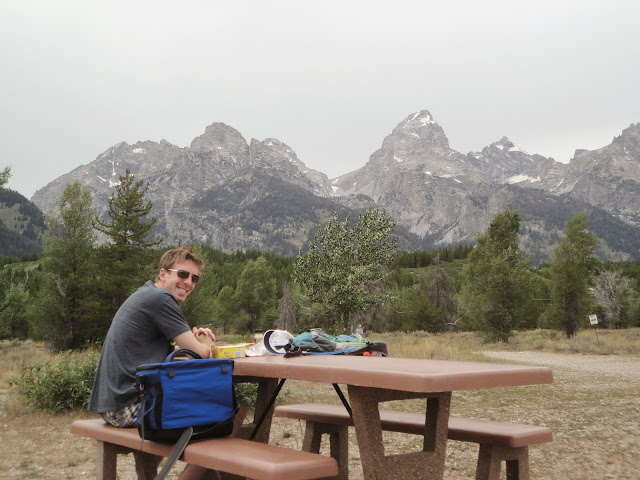 Lunch in the Grand Tetons

The Climber’s Ranch is a group of rustic cabins located inside of Grand Tetons National Park that is run by the Alpine Club. The cabins were cute, but they are hostel style with multiple bunk beds in each cabin. The beds are just plywood platforms that you unroll your sleeping pads and bags onto. There was no other furniture (or heat) in the rooms. We decided to stay the night and luckily no one else was in the room with us. 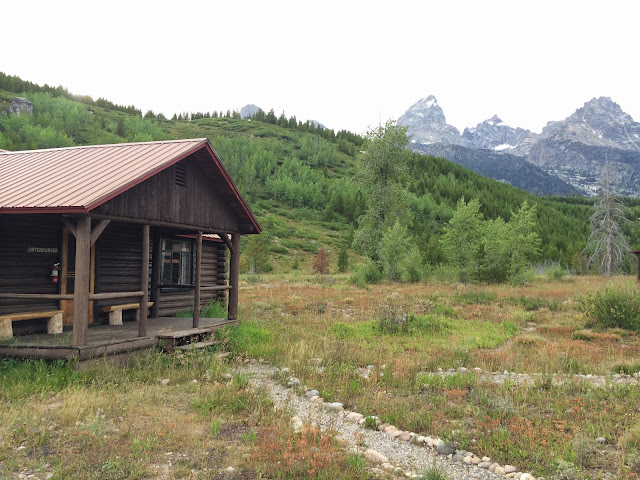 Our cabin at the Climber’s Ranch

Before ending our day we did a short hike to Taggart Lake. The mountain lakes in Grand Tetons were beautiful and we really enjoyed the hike. Afterwards Jon wasn’t feeling well so we drove through the park to see what was around and then went to our cabin for a nap. Rather than cook our own dinner outside at the climber’s ranch we drove to Moose, WY where we ate at Dornan’s. We were pleasantly surprised to find Dornan’s to be a local hangout and not full of tourists.  We got a pizza and calzone, and they were good! 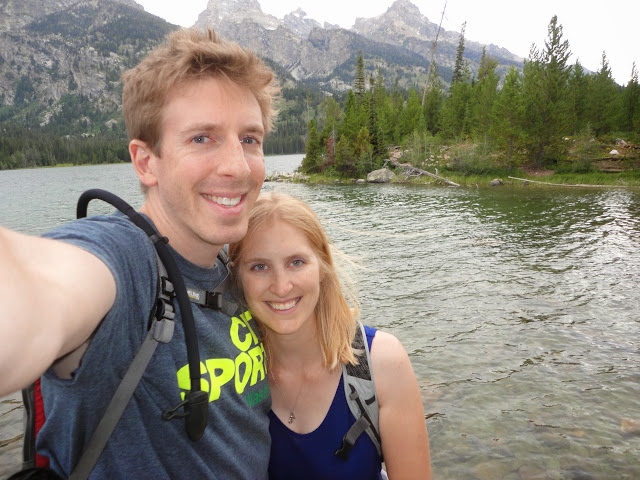 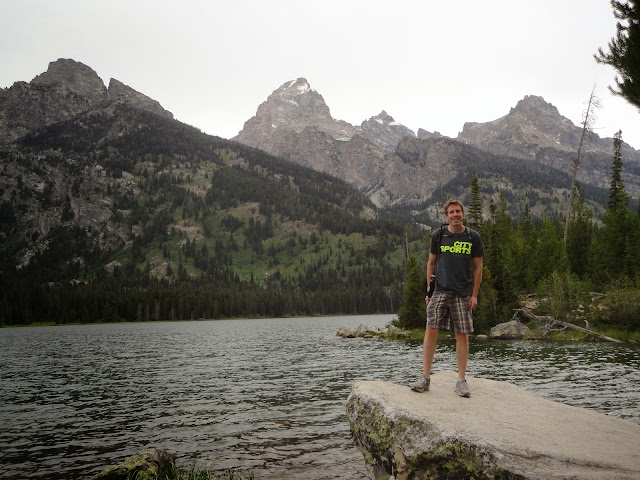 The next day we had a guided climbing trip. We went to the Jackson Hole Mountain Guides office and then ran to a grocery store for coffee, breakfast, and to pack lunch. Our day climbing was at Hoback’s Shield, a large rock outcrop south of Jackson. We started on an 5.7 and had no problems. The second climb of the day (a 5.9) was too hard for us as we both got stuck on climbing over an overhang.  So the guide recommended a multi-pitch option for our 3rd climb. For those of you who don’t climb, that means that all three of us (Jon, me, and the guide) climbed up to a small rock ledge using one rope. Once we were all there, we had to move the rope with us and climb up the rest of the way. On the way down we had to stop at the same ledge, re-tie the rope lower, and then come down the rest of the way. It was a great climb for our ability and interest. We ended the day on a shorter climb that really tested our technical skills but somehow both of us made it up. 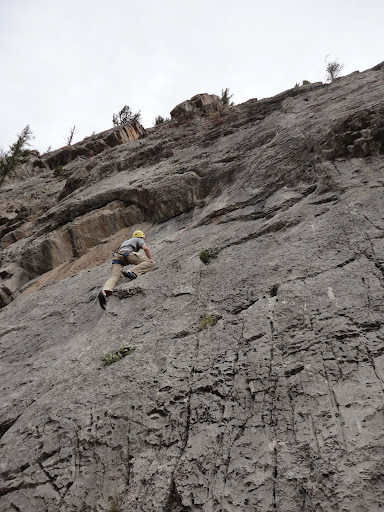 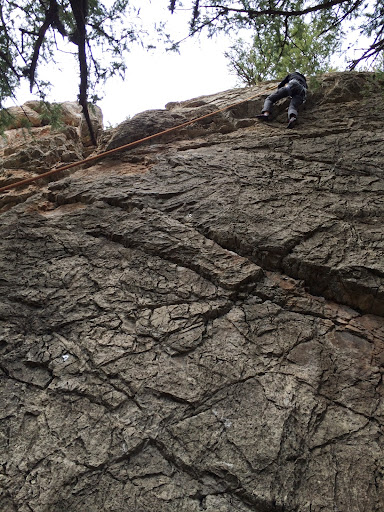 When we were done climbing we went straight to the Fireside Report to check into our cabin for the night and wait for Tom and Ginger to join us. The cabins were really neat little two room structures with nice amenities such as a firepit and great shower. When we were all together we went to Cafe Genevieve in downtown Jackson. The food was very good (or so I was told because I was starting to catch a cold and couldn’t distinguish flavors well). One thing I could taste and enjoyed was the ‘Pig Candy Appetizer’, thick cut bacon flavored with molasses and paprika. At the end of the meal, we surprised Tom and Ginger with a dessert to celebrate their anniversary. Another nice surprise was to find a ‘Guy ate here’ logo in the restaurant indicating Cafe Genevieve was on one of our favorite TV food shows, Diners, Drive-ins, and Dives. 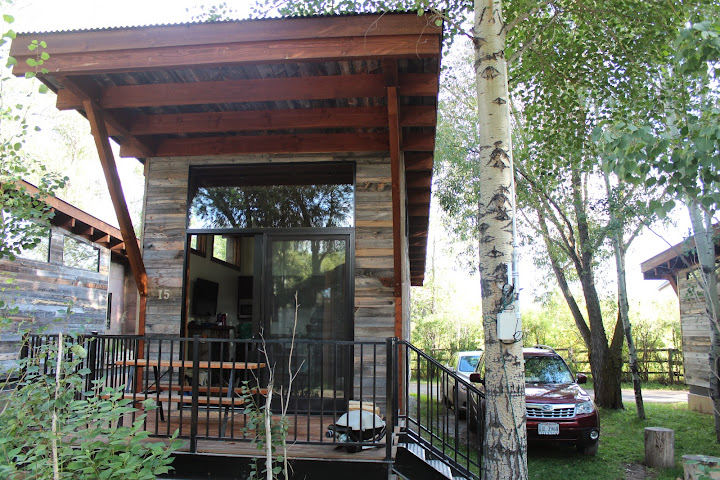 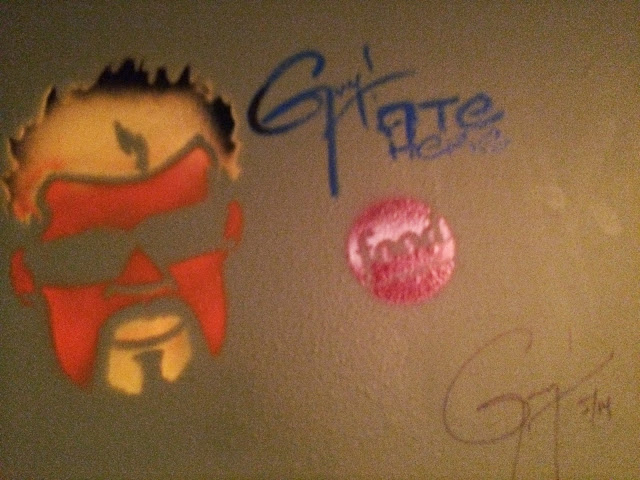 The next morning started with breakfast sandwiches ala Tom which were very good. Our activity for the day was to hike around Jenny Lake. Unfortunately the weather took a bad turn for the first time on our trip and it was cold and rainy most of the day. On top of that, Jon and I were fighting colds. Our hike was about 2.5 miles and took us to Hidden Falls and Inspiration Point. 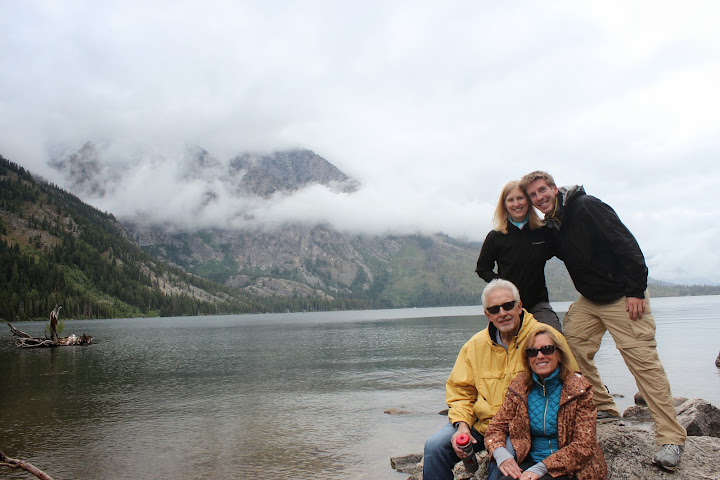 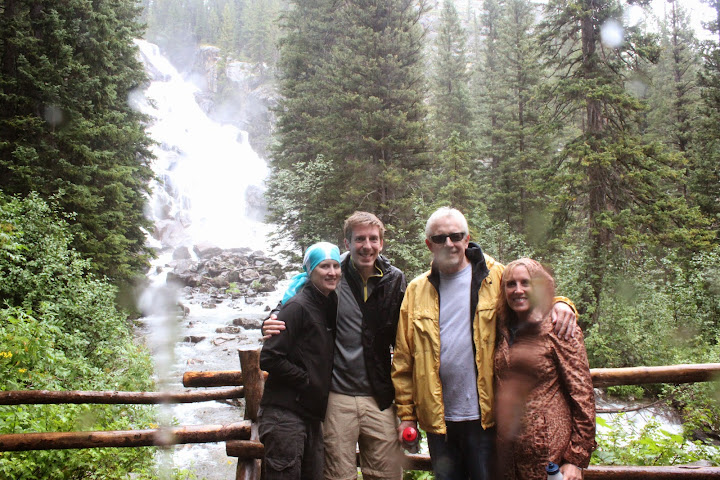 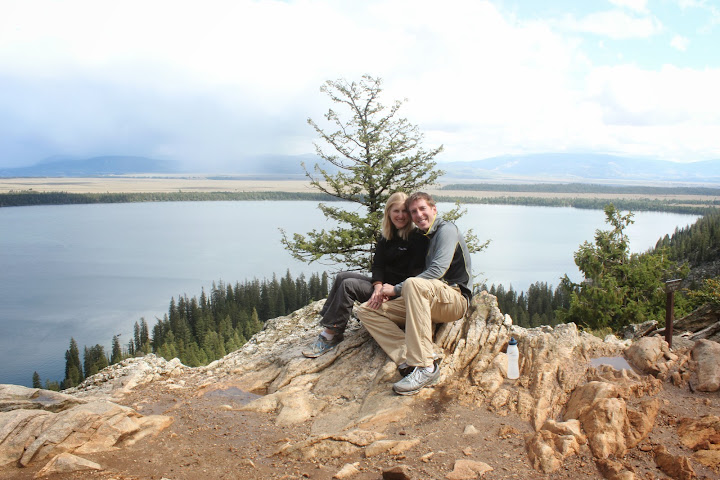 On the way back we opted for the lake shuttle. For dinner, we went to the Bar J Chuckwagon restaurant. Chuckwagon restaurants are supposed recreate the type of meal and entertainment that would have been served on a cattle drive to cowboys. The food was surprisingly good, although the restaurant did admit that authentically the beans we had as a side dish would have been the main meal. After eating there was a stage show of 5 singing wranglers. They started with what they considered classic cowboy songs, but ended with a more modern medley including songs like Beat It. For me the highlights of the show were the songs showcasing their fiddle player and their banjo player. 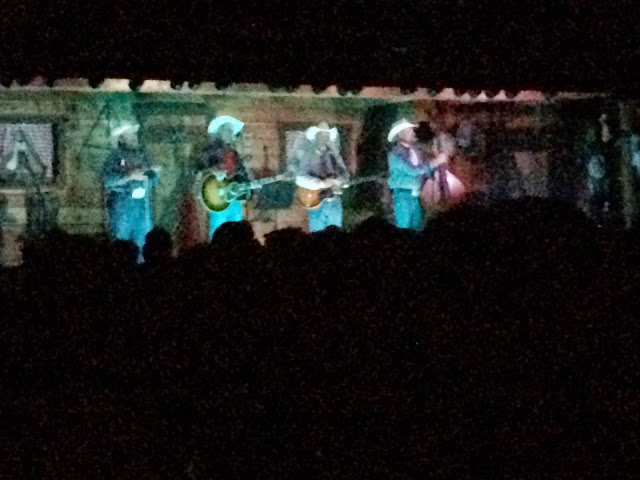 Our last day in the Grand Tetons got a late start, mostly because my cold had really gotten worse. When we finally got moving we stopped for some cold medications, then breakfast at the Virginian. On our way into Grand Tetons we stopped at Dornan’s in the town of Moose one last time for some snacks. To our delight, two giant moose were grazing in a field behind Moose, WY! 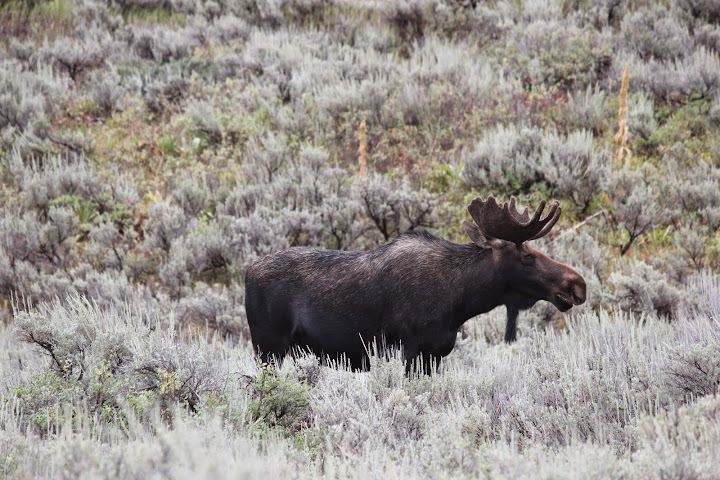 As we headed out of the area, we drove through the park once more stopping at the overlooks recommended in our guide book. 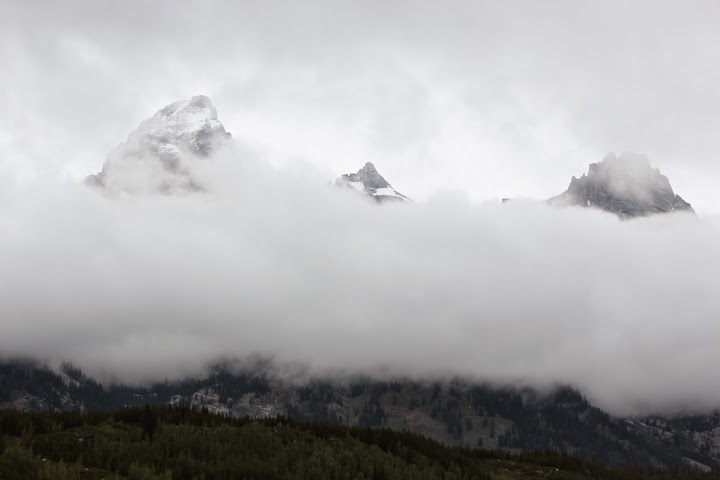 Our last glance of the Tetons through the clouds 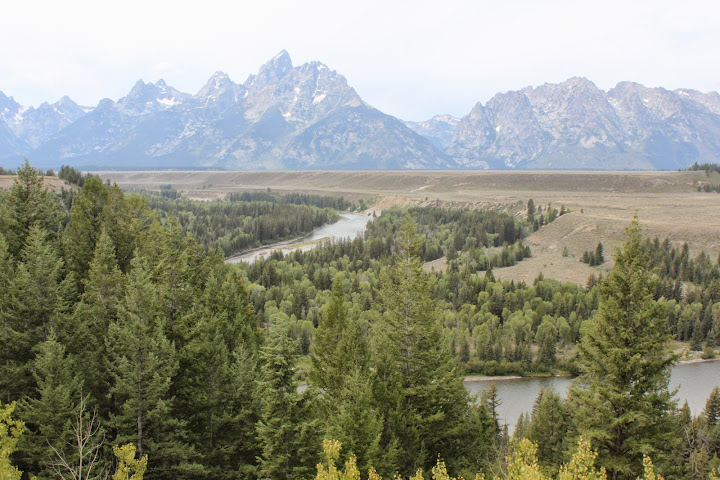 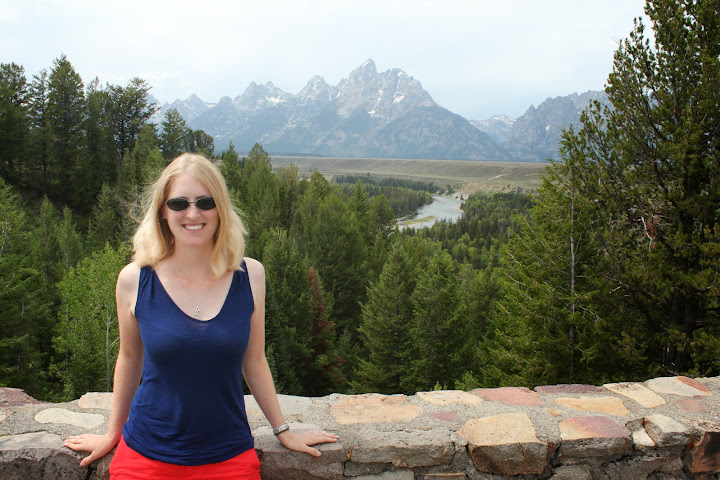 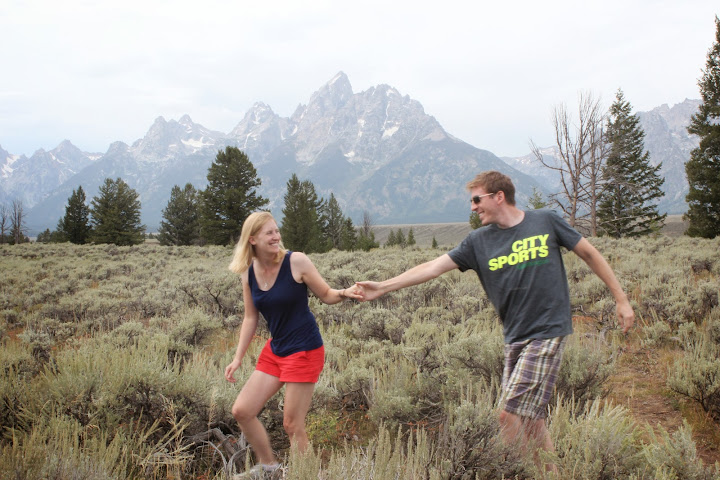 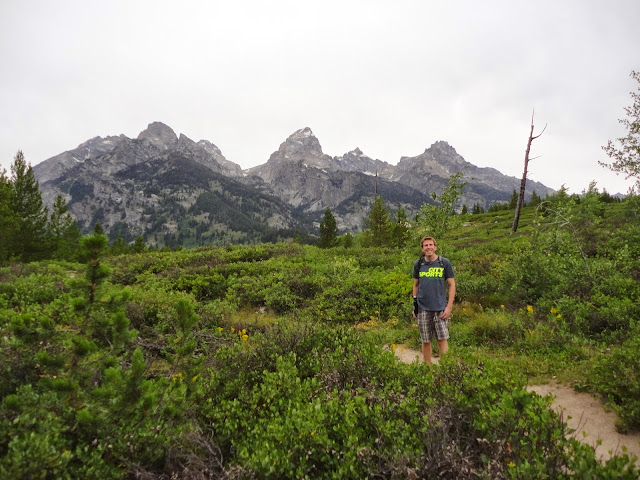 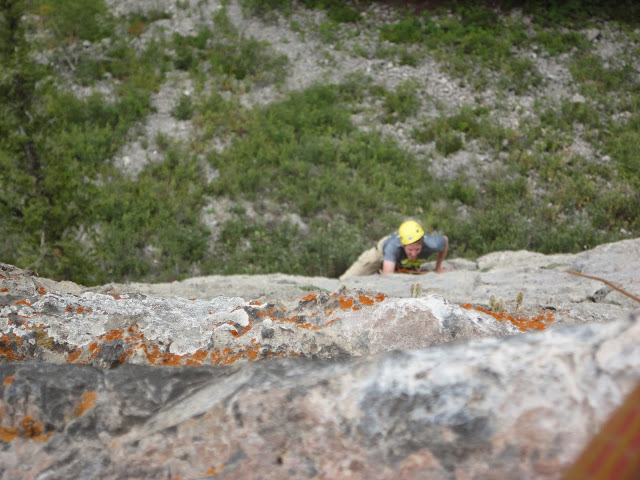 Jon climbing while I wait on the first pitch ledge 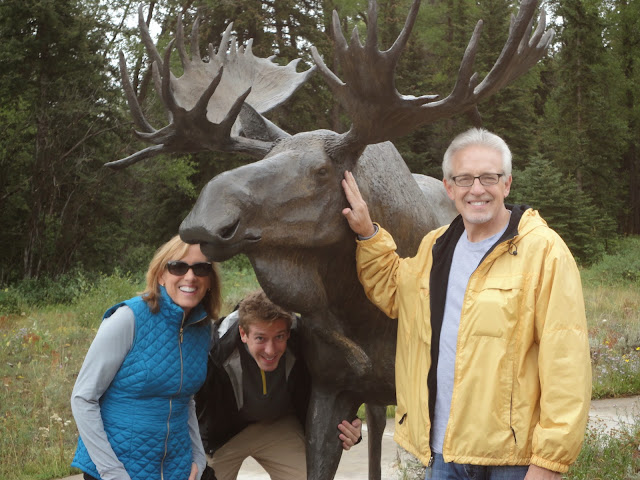 This moose was almost as tall as the Herrs 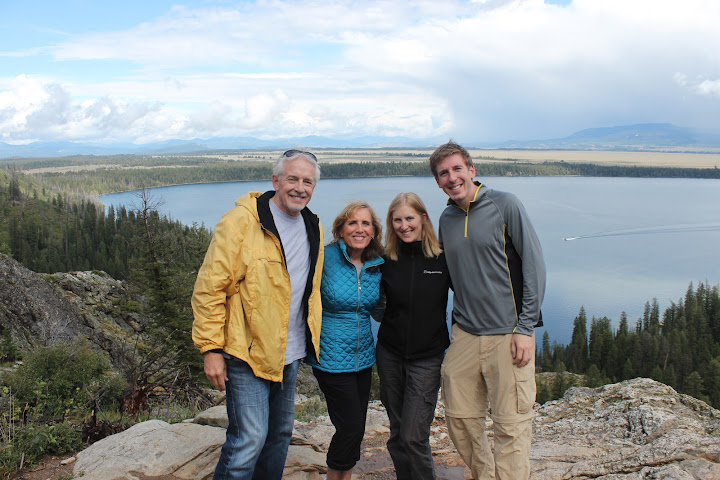 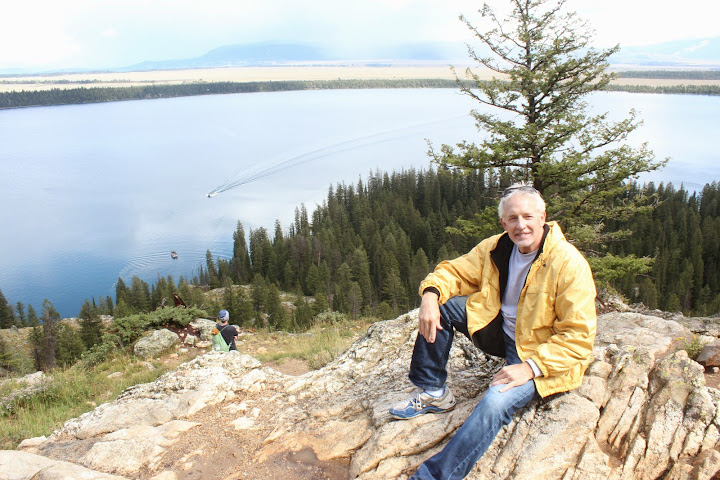 Tom had a pensive moment at Inspiration Point 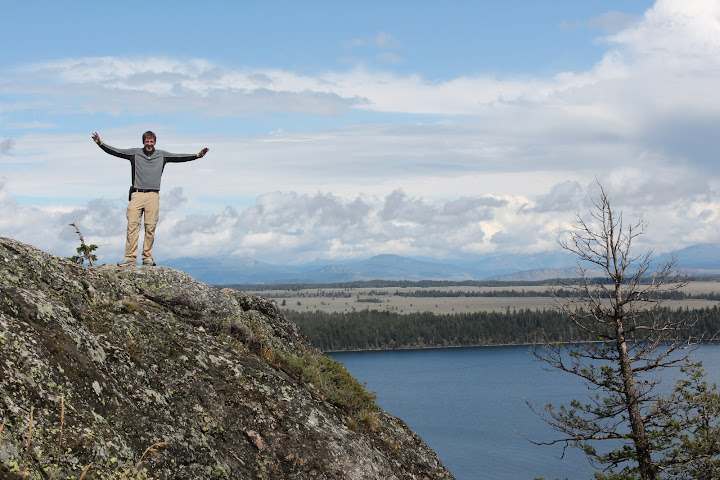 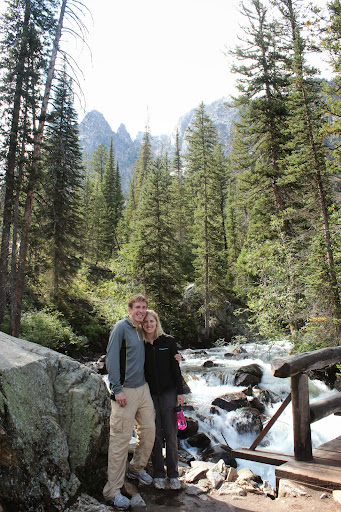 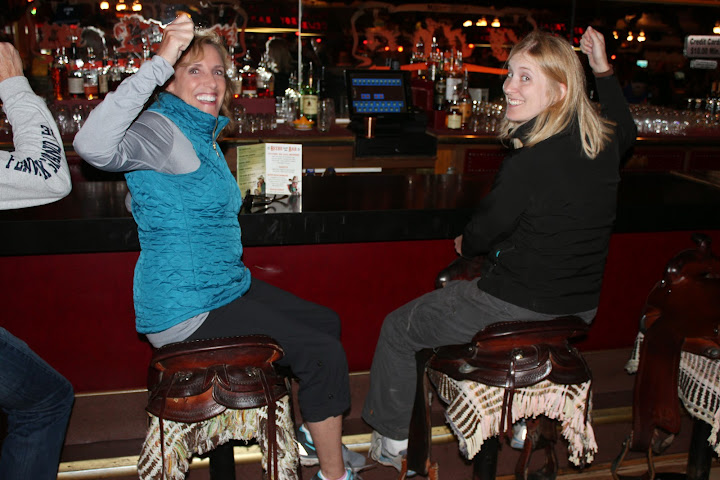 The Cowboy Million Dollar Bar, this one’s for Mary Jo!