We are very excited to bring you part 1 of HerrWeGo’s first blog request – a list of the most weird and unusual foods that we have eaten while traveling through Asia. 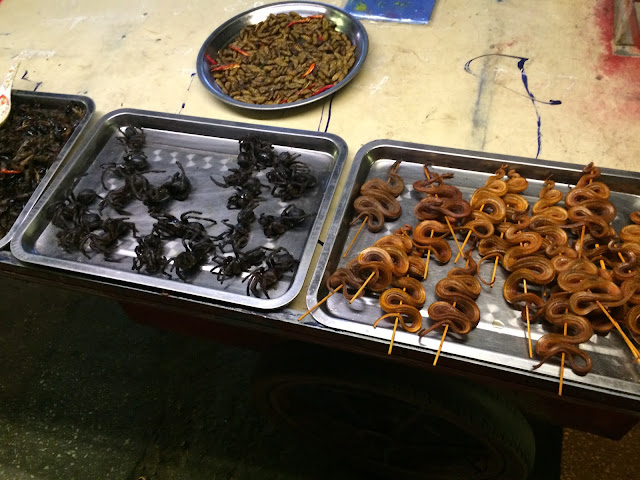 Living in DC, we are lucky to have a large international food community and to have tried many foreign cuisines. However, on our travels, we occasionally come across foods that are new to us and sometimes a bit scary. Here is our list of the weirdest foods we’ve come across and eaten during our travels. While there are many other strange foods in Asia, this list is limited to what we had in Cambodia, Hong Kong, Japan, Laos, Myanmar, Singapore, and Thailand. In Chang Mai we were able to sample this Chinese cuisine. The egg is not actually a thousand years old, but it does smell and look like it. Thousand year old eggs (sometimes called hundred year eggs or Century eggs) are eggs that have been preserved in a special mixture. The eggs are similar in texture to hard boiled eggs. Although the odor was off-putting, the eggs weren’t nearly as bad as we expected. Still, we don’t plan to be eating another anytime soon. 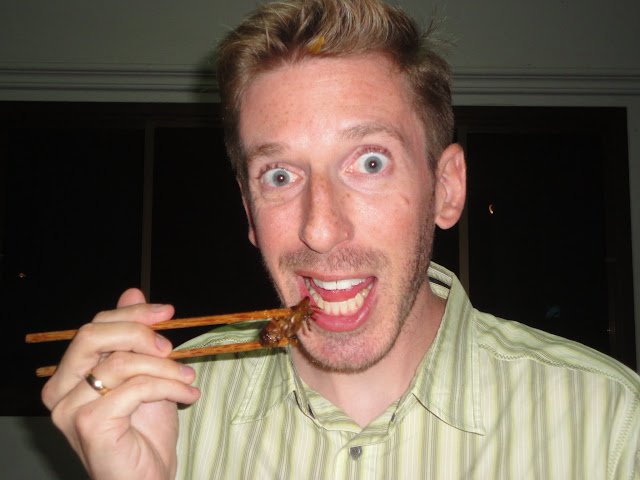 In Thailand we sampled two fried insects: crickets and bamboo worms. The fried crickets were purchased by weight at a market. The fried bamboo worms came prepackaged similar to a bag of potato chips. The texture of the crickets was exactly what we expected and the taste was the same as any fried food. The bamboo worms weren’t very different in texture from a cheese curl and, again, tasted as all fried foods do. 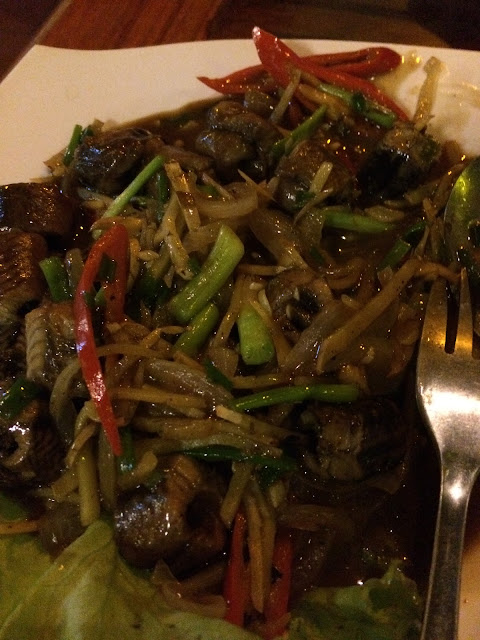 At a small, dirty restaurant in Cambodia we tried grilled eel. We ordered eel because typically we’ve enjoyed our experiences with grilled eel on sushi. However, the eel in Cambodia was a whole different story. It was very unappetizing to pick minuscule pieces of meat from the sharp disk-like vertebra. 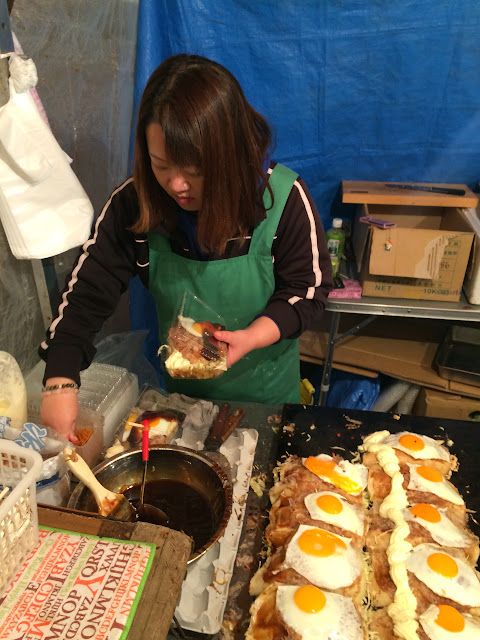 Okonomiyaki is a skillet fried ‘pancake’. We first came across okonomiyaki at a street fair and weren’t sure what it was. There are many variations throughout Japan, but the okonomiyaki we sampled was mostly cabbage and noodles in a thin crepe like shell and topped with an egg. Okonomiyaki is served with sweet bbq sauce and mayonnaise. Later, when we were in Osaka, we passed many other okonomiyaki restaurants which seemed to be extremely popular with the Japanese. We tried okomoiyaki twice because it looks and smells great although we left both samplings unimpressed. Sour pork is fermented ground pork and shredded pork skin. The overall effect of the skin in the mixture was that of a gelatinous, fatty meat. While eating it we didn’t even realize there was skin in it and thought it was meat with an excess of fat. It was a dish we decided to only sample once. 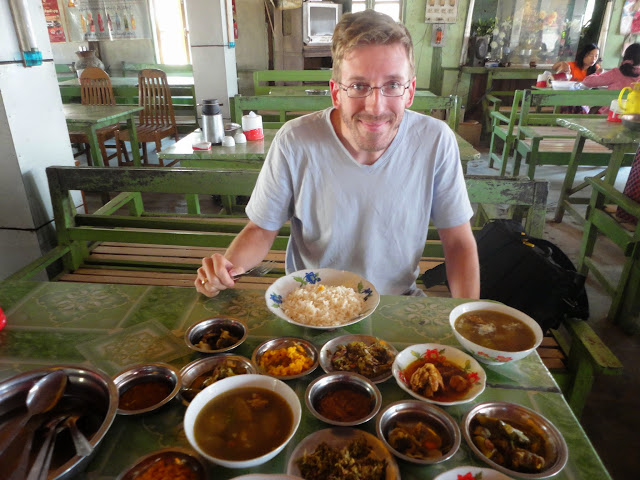 While named “curry”, we found it very different from the standard Indian and Thai curries we were used to. Burmese curry was the most common dish we had throughout Myanmar. The curry consisted of roasted meat (usually goat, beef, or fish) in a mild peanut oil mixture. The curry serving always seemed small to us, however it was served with numerous small side dishes and dips, some of which were very spicy or unappetizing to us. They often included blanched vegetables along with soup and rice. The curry was good and the many side dishes always left us full, even if we were confused by them.

Young green peppercorns were an ingredient in Laotian and Thai cooking that that stood out to us. The peppercorns are placed into soups and meat dishes as whole bunches. They add a very distinctive and strong flavor to the food. The flavor they give a dish is palatable, but if you bite into one be prepared for a sudden unwelcome spicy crunch. 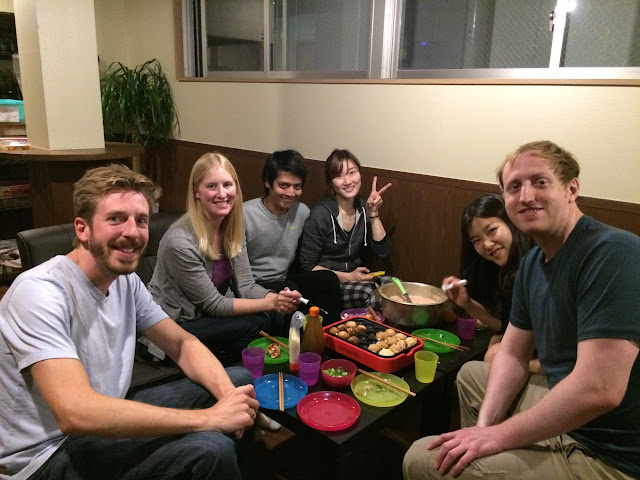 Takoyaki was the food we most often saw lines for at food stands in Japan. Takoyaki are doughy balls made on a specialized grill, usually with a piece of squid in the middle. We had a unique experience with takoyaki because we were able to join some locals at our hostel and help make it. The homemade takoyaki started with batter made from a store bought powder and mixed with liquid. The batter was poured into the grill pan and tempura flakes, squid, and/or cheese was added. As the batter cooked it had to be spun inside of the semicircular indentations on the grill until cooked into the shape of a ball. The finished balls are served with a very sweet bbq sauce and mayonnaise. I have to believe that Takoyaki on the street may be a bit better because often I found the takoyaki to be undercooked, bland, and overwhelmed by the taste of the sauces on top. 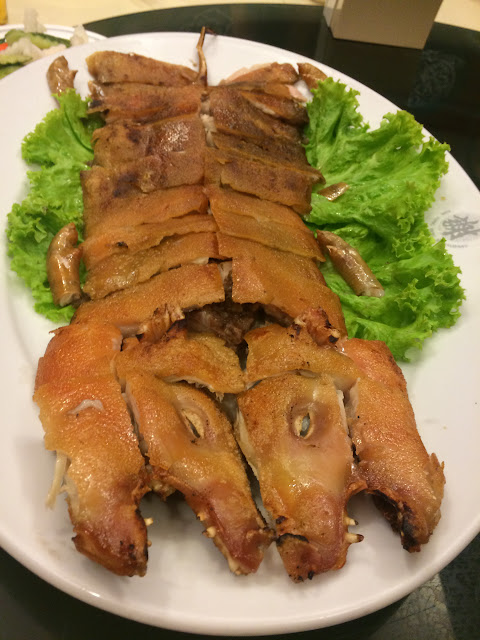 A Chinese delicacy, and delicious (if you can stomach seeing a splayed shoat on your plate). The reason suckling pig is popular is due to its tender meat and the crispy skin. Suckling pig was a meat we very much enjoyed and they only reason it isn’t higher on our list is because, as a form of pork, its not as strange as the other foods we ate while traveling. 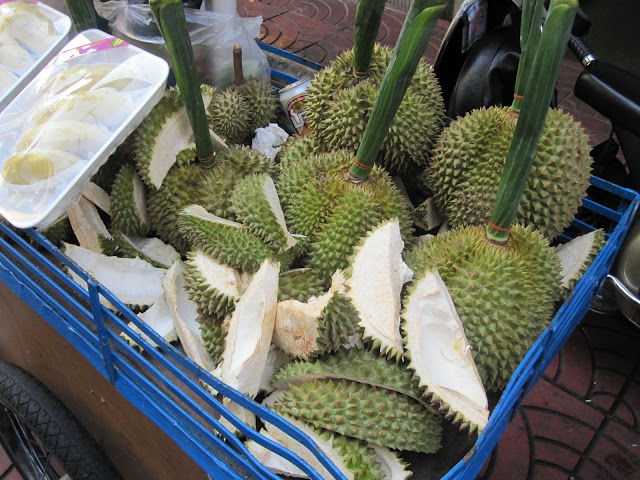 Due to its pungent odor, durian is banned from being brought into public places including on trains and metros throughout Thailand. Under its spiky shell are pockets of creamy flesh which can be eaten and are often served chilled. We tried durian on both of our trips to Thailand, in 2011 and 2015. Jon enjoyed both of our experiences with this creamy fruit. Alexis’s feelings are mixed. On our first trip the fruit had been opened before we tasted it and the odor effected her enjoyment of it. On our second trip Alexis liked the fresher pieces we had straight from the fruit.

Alas, I wish that I could say that the weird foods we tried were our favorites, but more often than not they weren’t.

One thought on “Our Top 10 Weirdest Foods – Asia Edition”