Everglades National Park was always intended more to preserve wildlife than to preserve scenery like most other parks.  During our one night visit, this became obvious.

After leaving the Florida Keys, we drove straight to Everglades National Park, arriving around 2pm at the east entrance.  The weather was in the 80s and humid, so we were debating about whether we should should camp in the park or return to the closest city to find a cheap hotel.  It could be our last chance to camp in warm weather, but we thought it could almost be too warm with the humidity.  The south section of the park has a 36 mile long road with various overlooks, exhibits, and trails along the way.  We had read that at the very end of the road was a place to catch a boat tour into the backcountry.  We decided that it made sense to camp at an established campground near the end of the road and catch the boat tour first thing the next morning, rather than driving out and back in the next day

Our first stop in the Everglades was the Ernest F. Coe Visitor Center.  There, we found a nice museum describing the park and the wildlife we could discover within. One sign in particular caught our attention saying, “Get Wet! Don’t be afraid to slough through the park by yourself or on a ranger guided tour.” The park rangers recommended certain sites and gave us information concerning the boat tours.  The most hightly recommended trail was the Anhinga Trail, as it usually has the best chance for spotting wildlife.  The Anhinga Trail (0.8 mile roundtrip) started at the Royal Palm Visitor Center and was an easy stroll down pavement and boardwalk stretches.  We immediately spotted huge vultures and signs indicating that they will damage your car (the park provided tarps to protect your car, although no one used them).  We also saw many other species of birds, such as the white ibis and heron.  Fish were very abundant and we found one turtle.  We expected to see a lot of alligators, but at first only saw two from afar, needing the zoom lens on the camera to confirm our sightings. However, as we were leaving a section of the boardwalk, we heard a rustling in the brush to our left.  When we looked over the railing, an alligator was swimming right toward us but stopped when it saw us.  This gave us an opportunity to get many close up photos.  After seeing the rest of the park, we agreed that the Anhinga Trail was definitely the best for seeing wildlife. 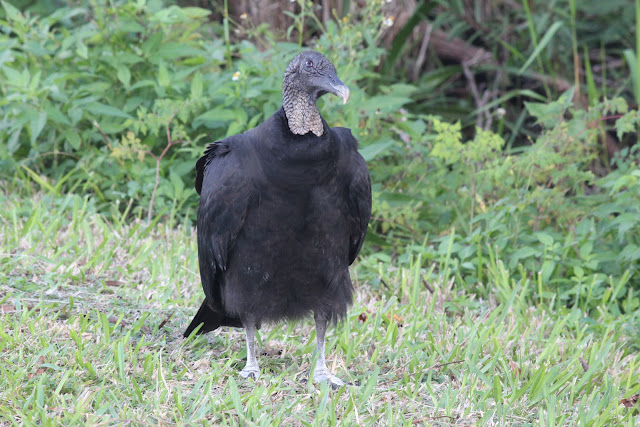 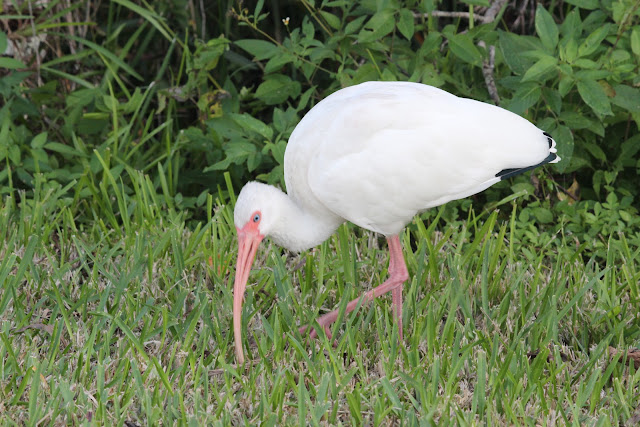 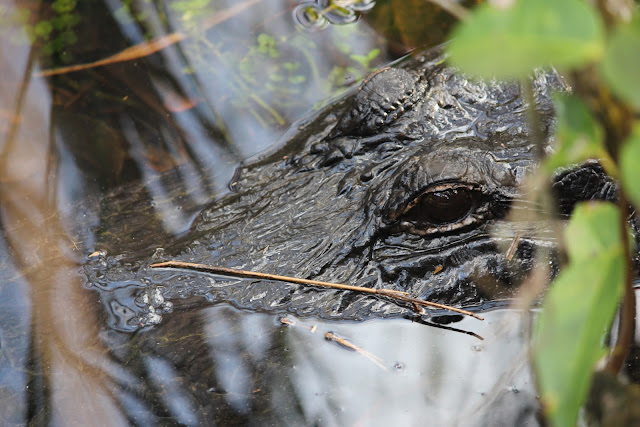 One other trail began at the Royal Palm Visitor Center.  This was the Gumbo Limbo Trail (0.4 mile round-trip) and it wound through a shaded section of gumbo limbo trees and palm trees, but lacked all of the wildlife we found on the Anhinga.  We then continued down the main road and stopped at the Pa-hay-okee Overlook (0.2 mile roundtrip) for a short walk to a platform providing a distant view into a wide “river of grass”.  The sun was setting and we wanted to find a spot to take a picture of the sunset.  We decided to stop at the Mahogany Hammock Trail (0.5 mile roundtrip) after seeing a picture in our guidebook of sunrise there.  We rushed down the boardwalk trail to find a view of sunset, but failed as the entire trail was sheltered by large trees. 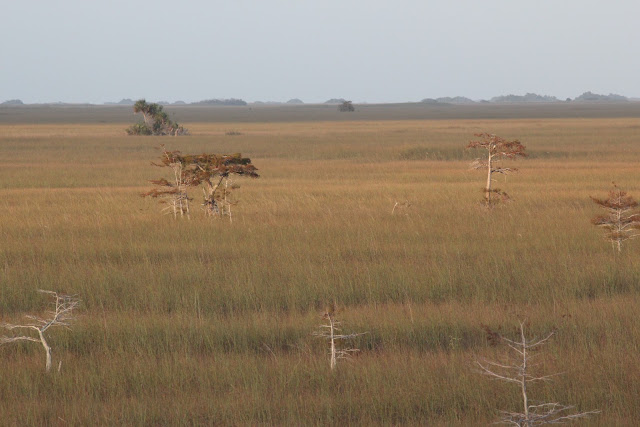 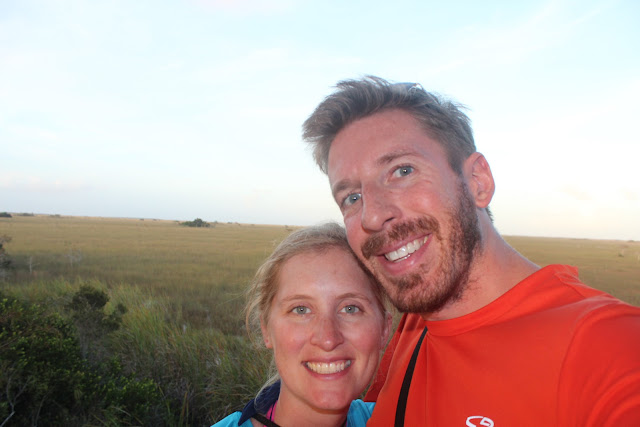 Since it was now getting dark, we decided to skip the other stops and go directly to the Flamingo Campground for the night.  We arrived to a mostly empty campground and picked a site next to a palm tree. After getting out of the car and immediately getting bombarded by hundreds of blood thirsty mosquitoes, we again debated our decision to stay there versus driving all the way back out of the park for a hotel.  We covered ourselves with lots of bug spray and decided to suck it up and stay.  After unloading the tent and cooking equipment, I went to close the passenger side door and was surprised to find a big frog on the dashboard with a mosquito in its mouth (after all, the car was now filled with mosquitoes).  It leaped around the car a few times before I was able to get it out. 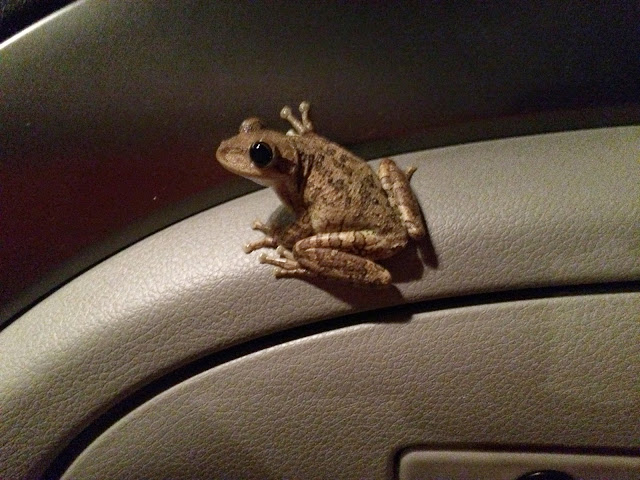 After getting the tent set up, we decided to hang out inside of it and read, away from the mosquitoes, until we got an appetite for dinner.  We cooked a freeze-dried spaghetti with meat sauce and a can of beans we still had in the car.  After scarfing down dinner and getting ready for bed, it started raining, so we quickly attached the rain-fly to the tent.  We had hoped to leave off the rain-fly because of how hot it was.  We got in the tent and tried to sleep, only after killing about 20 more mosquitoes that sneaked inside. 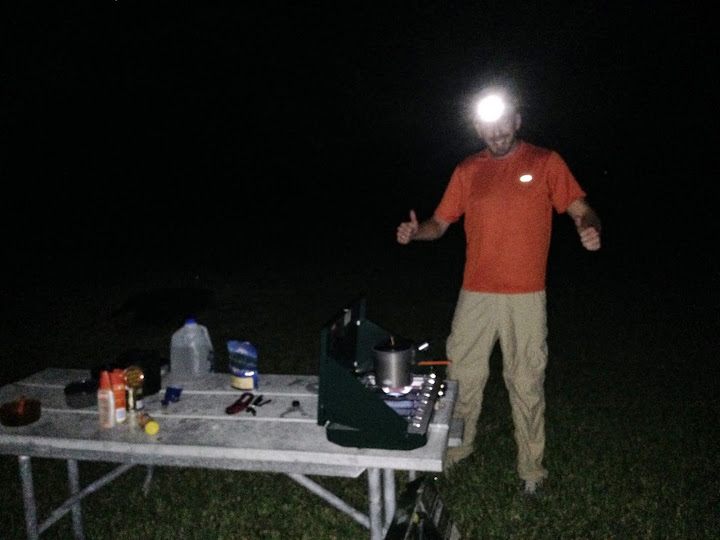 In the morning, we put away the campsite and went to the Flamingo Marina to buy tickets for the Backcountry Boat Tour.  Our tour started at 10am and it lasted just under 2 hours.  Although it was still very cloudy, the rain had stopped, and the mosquitoes seemed to not go near the boat, which was a relief.  The boat tour started up the Buttonwood Canal, which was a manmade canal originally built to connect the Florida Bay to the Coot Bay and Whitewater Bay.  The canal had caused an environmental disaster as it allowed salt water to more easily enter the fresh water areas and vise versa.  The park service eventually “plugged” the canal at the Flamingo Marina to mitigate the issue.  The tour brought us through the Coot Bay to the edge of the much larger Whitewater Bay, allowing us to see more wildlife, but we were disappointed to only see a small fraction of what we saw at the Anhinga Trail.  However, we had two very informative tour guides who helped spot and identify the wildlife we did see.  They pointed out an alligator, birds, and trees.  The trees included the red, white, and black mangrove trees. They also included the deadly manchineel tree, which is extremely poisonous and will cause blistering if the leaves are touched. 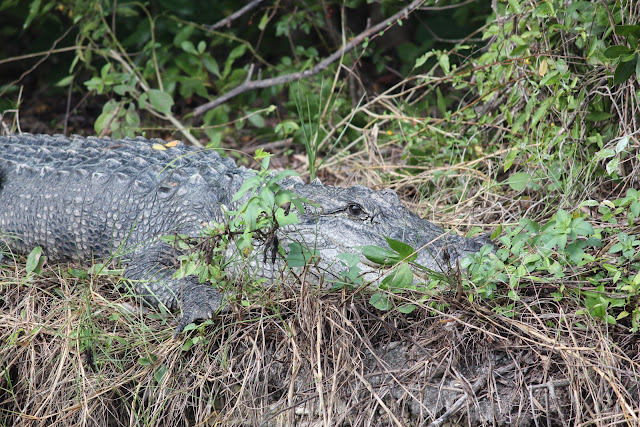 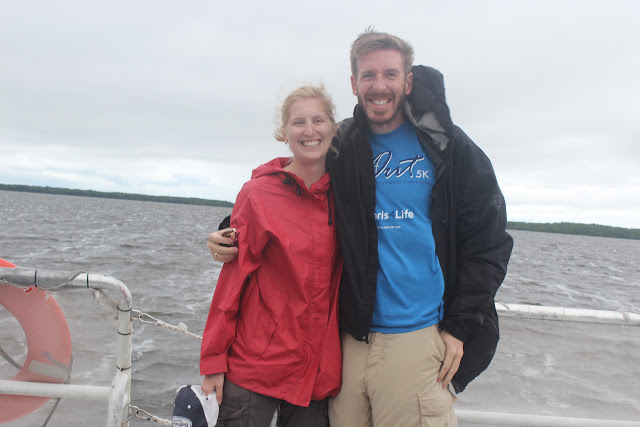 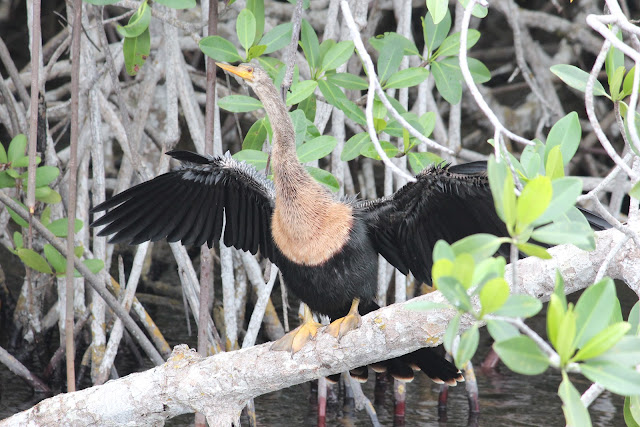 After the boat tour, we wandered around the marina seeking out saltwater crocodiles and manatees, as we heard they could be seen there.  After looking for about 30 minutes and not seeing anything, we gave up and started back out the main road.  We stopped at Nine Mile Pond, which was nothing special.  Then we stopped at the Pineland Trail (0.4 mile roundtrip) and walked the loop through a pine forest.  It was also mostly uneventful, except for a few snails with colorfully decorated shells we found on the trees. 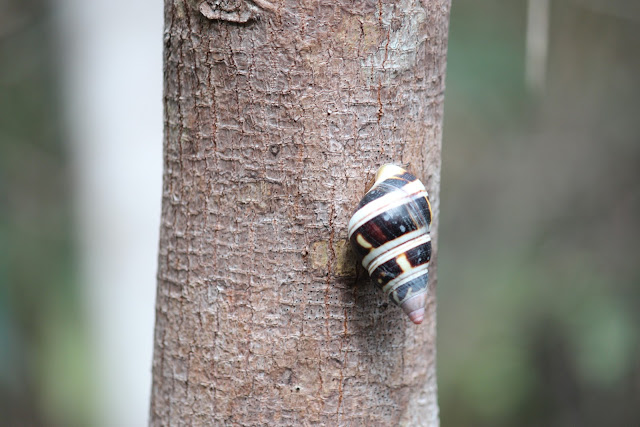 We finally left the park and decided to drive the full 5+ hours to St. Augustine, FL to meet Alexis’s family for a few days at the beach.  And we only had about 100 mosquito bites each. 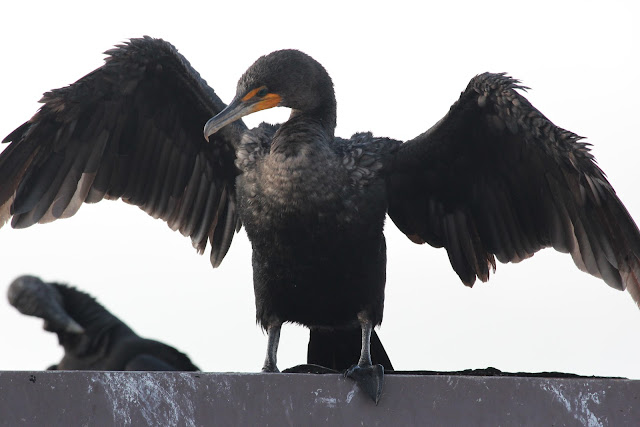 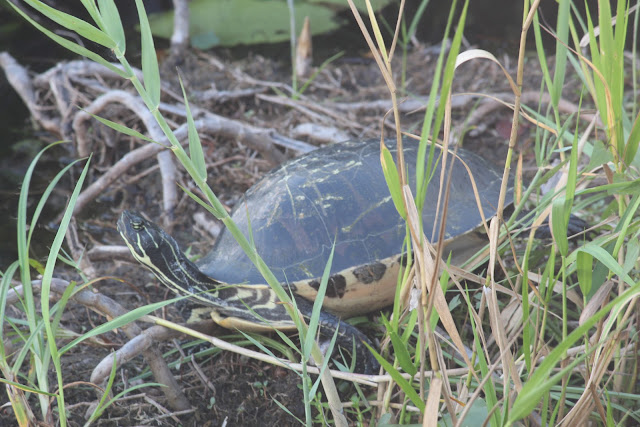 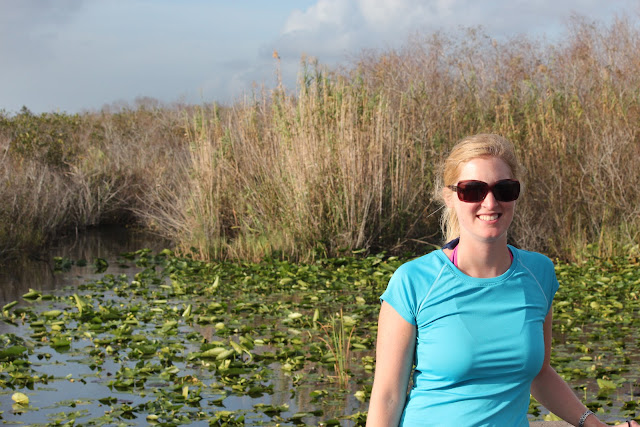 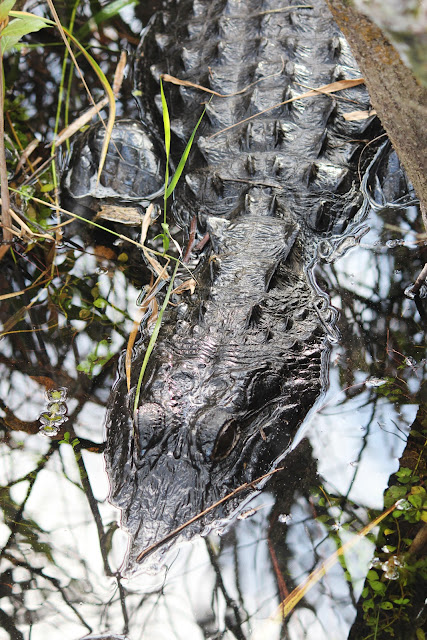 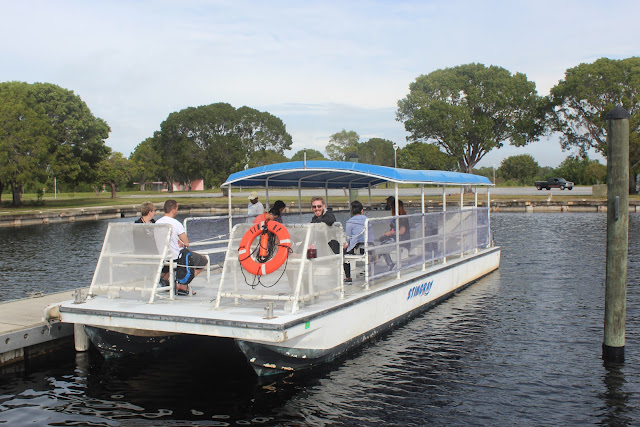 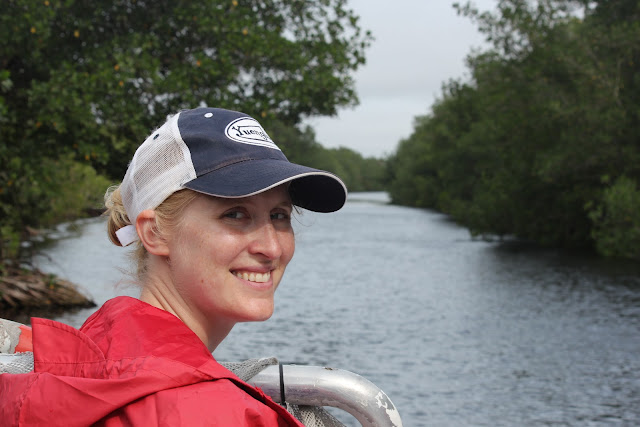 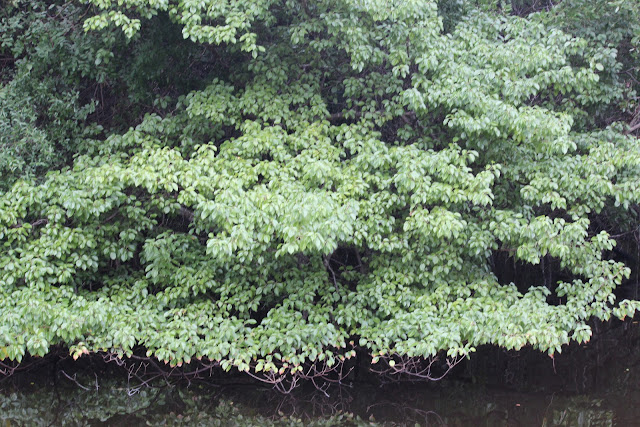