As a short trip from Seattle, we visited Vancouver and Olympic National Park where we rode ferries, hiked in a rain forest, and walked on a beach.

The next morning was Monday, so Bill was up early for work, and Jon and I decided to drive to Vancouver and Olympic National Park for a few days. The drive to Vancouver wasn’t very impressive but at least it didn’t take long. We were a bit nervous about entering Vancouver because a friend had warned us that a lot of car break-ins occur there. The first thing we did was drive to our hostel and unload a few of our bags. We stayed at the Same Sun Hostel which specializes in international travel and is for backpackers, most of whom don’t have cars. The size of the hostel really surprised us, having more than three levels of dorm rooms as well as a restaurant/bar and computer lounge. The hostel also had daily activities, it seemed like a nice place to meet people if you were there for an extended stay and not one night like we were. After checking in we drove to Stanley Park. 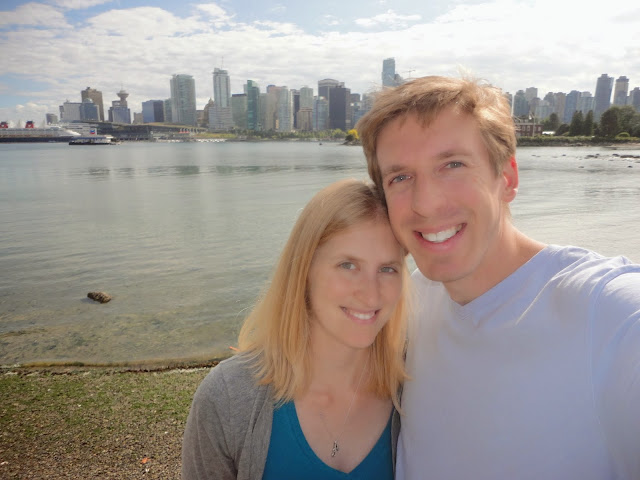 Stanley Park is a large park to the north of the city. We didn’t have any plans so we drove through the park following signs to totem poles, beaches, and more. If we had a full day it would have been a nice place to rent bikes. When we’d seen enough of Stanley Park we drove back into the city to find a garage to leave our car in overnight. 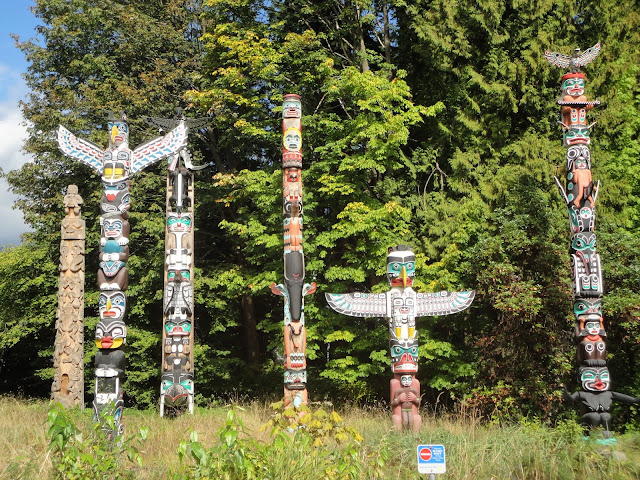 After a quick break at the hostel we decided to walk through the city and find dinner. We started with drinks at the hostel bar, The Beaver. After searching on yelp we decided to try The Flying Pig for dinner. There are two Flying Pigs in Vancouver and we chose the one further away in Gastown so we would have a nice walk through the city and also see Gastown. Gastown was a cute neighborhood with boutique stores and bistros. The original gas lamps were all now electric which was a bit of a disappointment. The most interesting thing we passed was a steam powered clock. Dinner at The Flying Pig was excellent and one of the nicer meals we’d gone to in a while. Jon at brisket which came with mashed potatoes and I had the pig rack which was a pork chop with pulled pork poutine. Poutine (smothered french fries) seemed to be very popular through Canada. 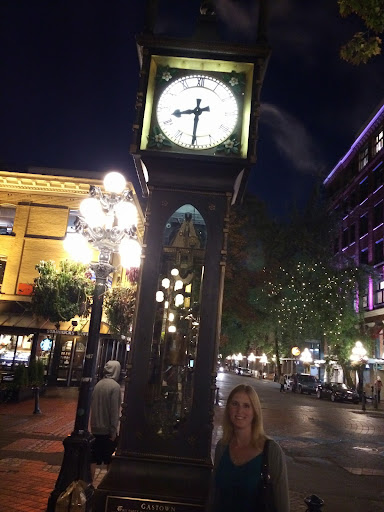 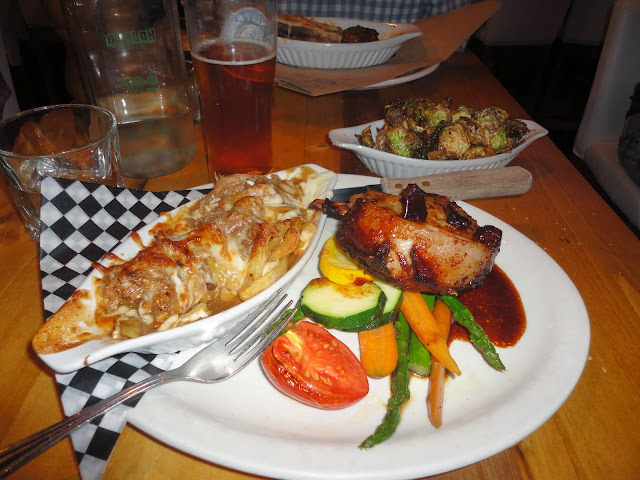 Dinner at The Flying Pig in Gastown

The next day we ate breakfast at the hostel and then started our drive to Olympic National Park. We had hoped to enjoy the drive which included riding two ferries and passing through Victoria (on Vancouver Island). Unfortunately we didn’t realize the time involved with taking ferries. At the first ferry we waited for an hour just to board the ship and were on the boat for almost two hours. The ferry did weave through some small islands providing nice scenery. 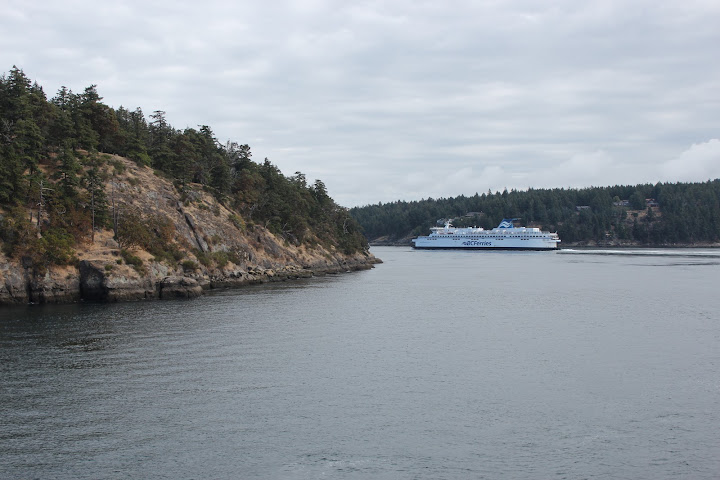 When we got to Victoria we didn’t have the luxury of time we were hoping for to see the town and have lunch. We parked and went to a very popular dockside food stand Red Fish Blue Fish. (The long line didn’t help our tight schedule any). Red Fish Blue Fish specializes in seafood tacones and we had fried oyster tomato and basil tandoori halibut. Both were very very good even though we had to eat them in our car while waiting for the next ferry. We didn’t realize that the next ferry, which crosses the Canada-US border asks that car be there 90 minutes early for customs! Luckily most of the other cars knew that so only a few others had to clear customs with us at the last minute. 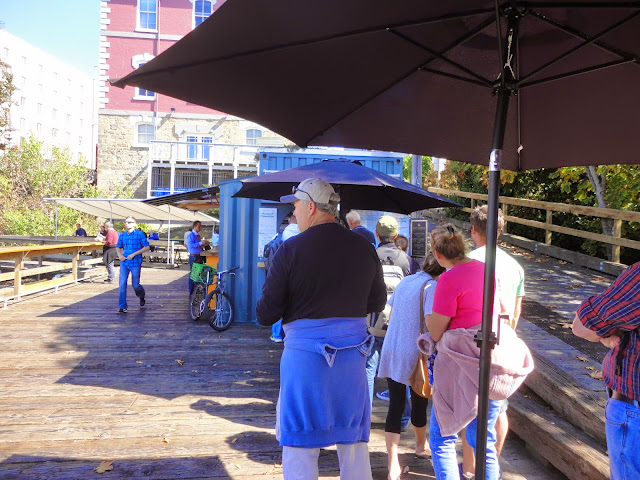 The ferry goes to Port Angeles, WA. We were eager to see some of Olympic National Park and drove straight there. Although the visitor center’s was closed already we were able to drive to Hurricane Ridge. Olympic Park is a circle that encompasses the Olympic Mountains, however there are no roads which go through the circle. From the top of the road we were at a high enough point that you can see many of the interior mountains and their glaciers. A bit further down the road was a 1.6 mile hike to Hurricane Ridge. Along the road and the hike were tons of black tail deer. 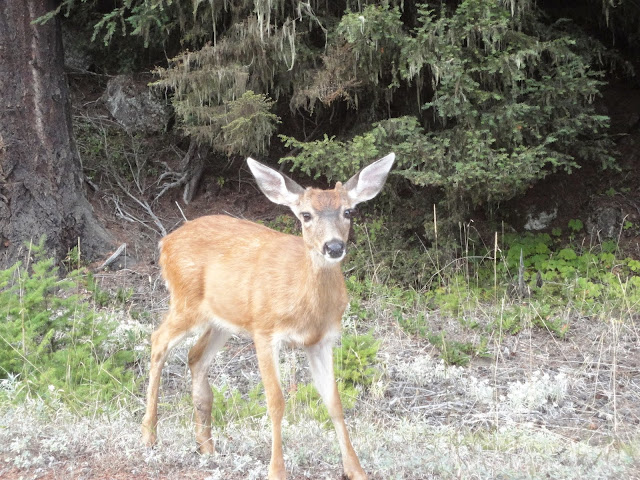 From the top of the ridge you have views in one direction of the interior Olympics and in the other direction of the coast including the Strait of Juan de Fuca and all of Vancouver Island. We also met a hiker from Vancouver Island who was very happy to hear that if we only got to eat one place in Victoria it was Red Fish Blue Fish. It was sunset by the time we left the park. Turning a corner on the road down we had a great view of the Harvest Moon. 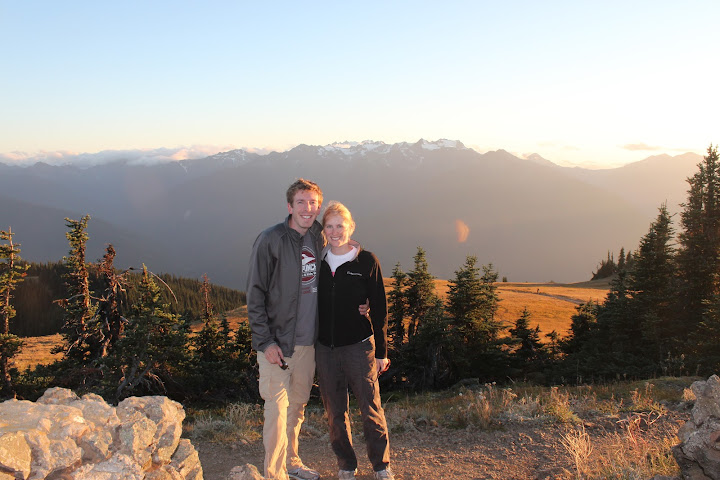 Top of Hurricane Ridge during Sunset 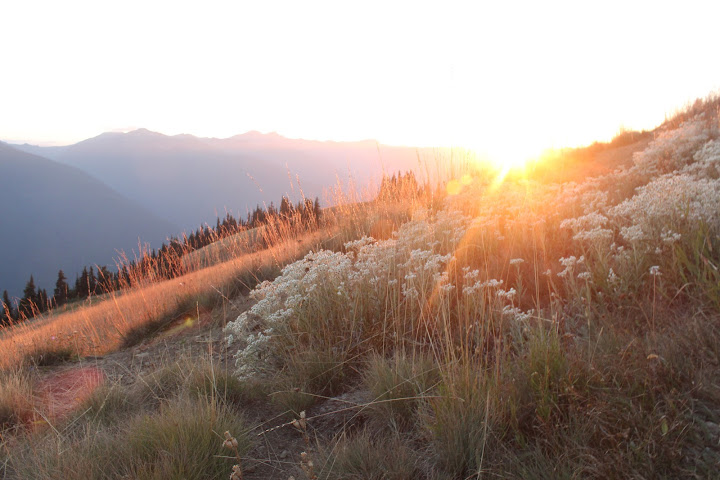 Because it was dark and already getting chilly, we decided not to camp. Instead we drove back to Port Angeles. We ate dinner at The Next Door Pub and found a hotel.

The next morning we stopped briefly at a grocery store before beginning our exploration of Olympic. Olympic bills itself as three parks in one; mountains (like we saw the day before), forest, and beach. Our first stop of the day was to the King Storm Ranger Station where we hiked to Marymere Falls. The hike was an easy 1.25 miles on wide paths, but we enjoyed the forest which was very green with lots of large trees and overhanging mosses and very different than most forests on the east coast. When we got closer to the falls, a series of wooden bridges and stairs took us up to several view points. 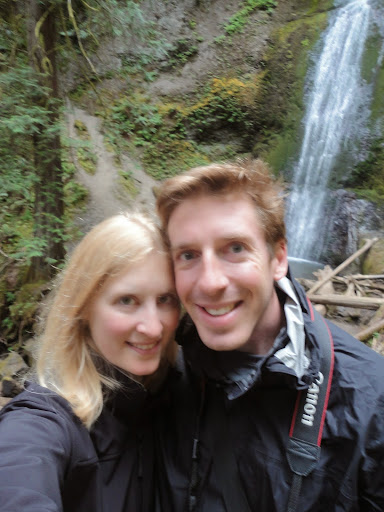 We drove next to Hoh Rain Forest in the park. Our guide book described the rain forest at ‘an enchanted place’. We did two quick hikes, the Hall of Mosses and The Spruce Nature Trail. We really enjoyed both hikes. The Hoh Rain Forest is even older than the area we had previously hiked with bigger trees and more over hanging mosses. 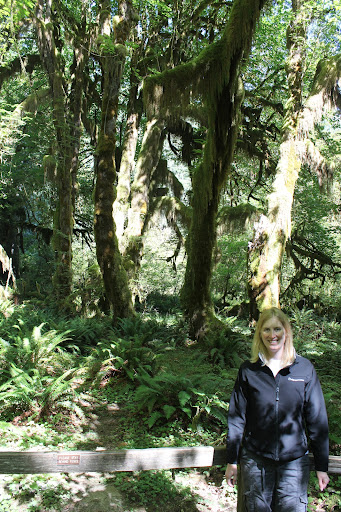 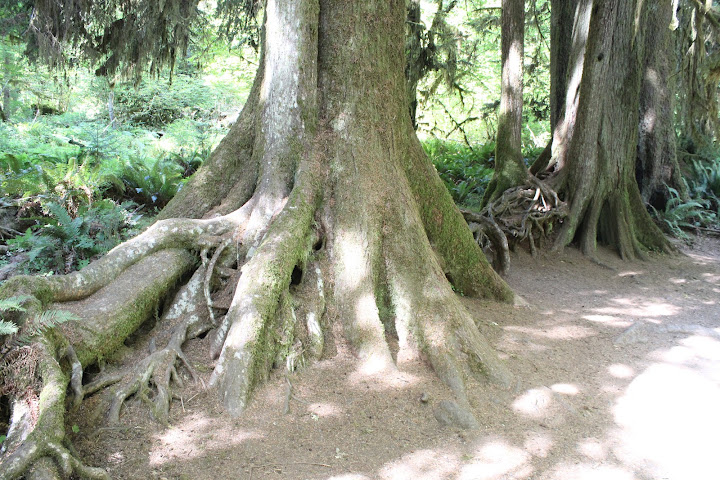 This is a tree colonnade, it happens when several trees all grow off of the same Nursery log (fallen tree). See, we learned some stuff.

Our last stop in the park was to the beaches on the Pacific coast. We stopped at Ruby Beach and Beach 1. Ruby Beach was covered in smooth rocks and driftwood. Ruby Beach is also known for its sea stacks, rock formations just off of the coast. When we got to the beach, we were surprised to find it covered in Inuksuks. We added a few of our own and walked a bit of the beach. 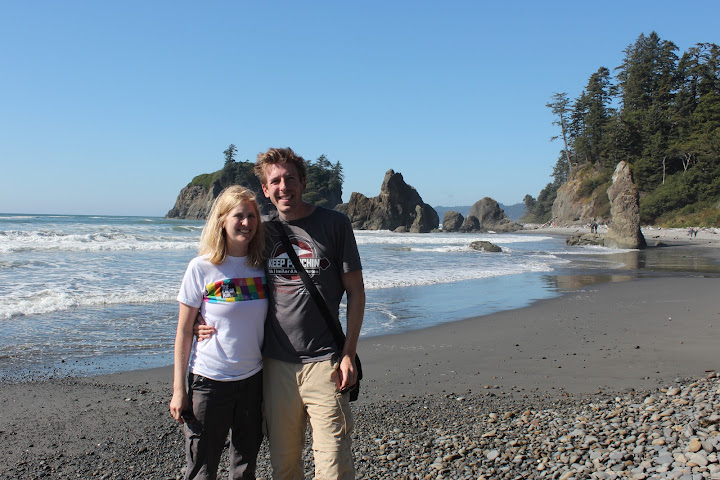 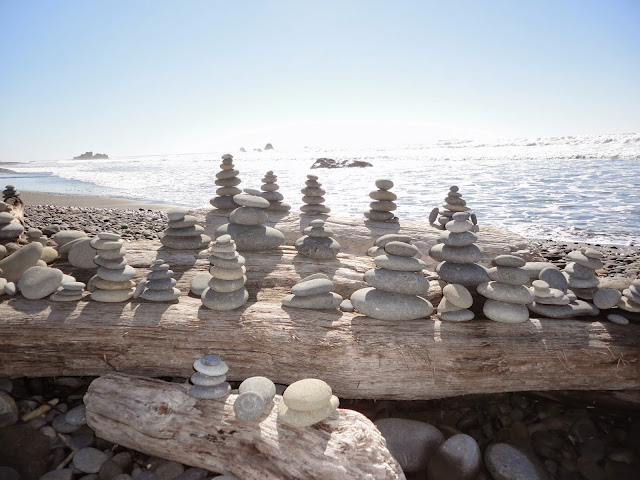 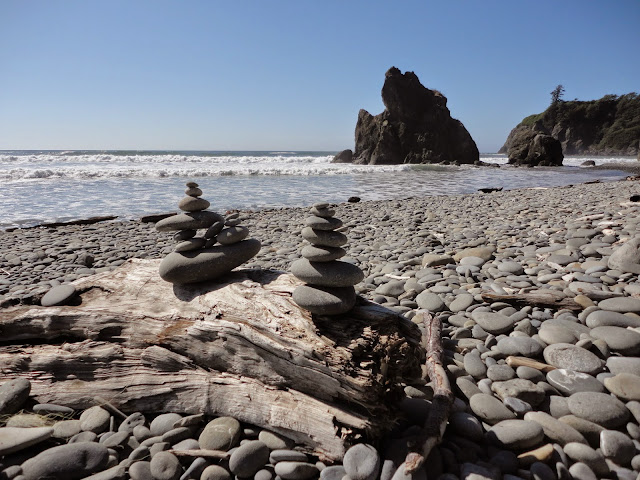 We took a quick detour on the way to see Big Cedar. A cedar tree our guide book described as ‘looks as though it was from OZ.’ Beach 1 was much more sandy but for a while the beach was completely desolate of other people as far as we could see. Both beaches are known to have tidepools exposed at low tide, but our timing wasn’t right to see those. 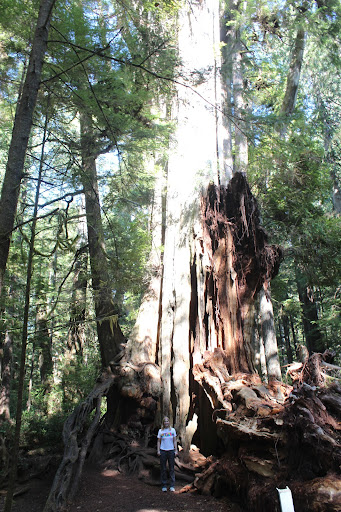 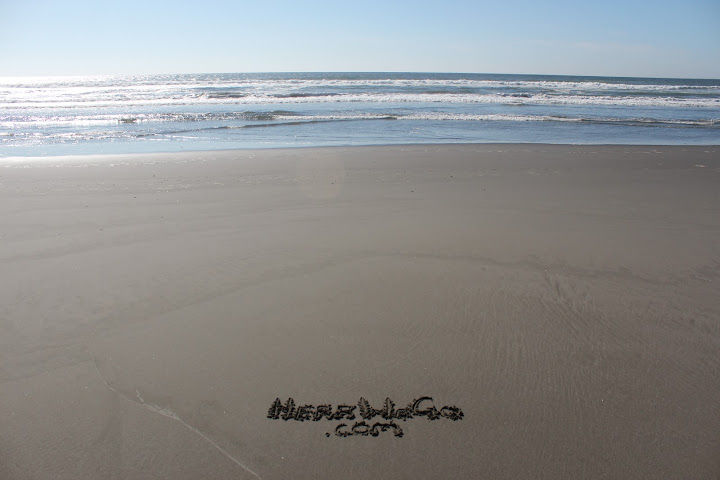 By the way, to get around Olympic National Park you have to drive through the city of Forks, WA. I took this photograph for the Twilight fans in our lives. 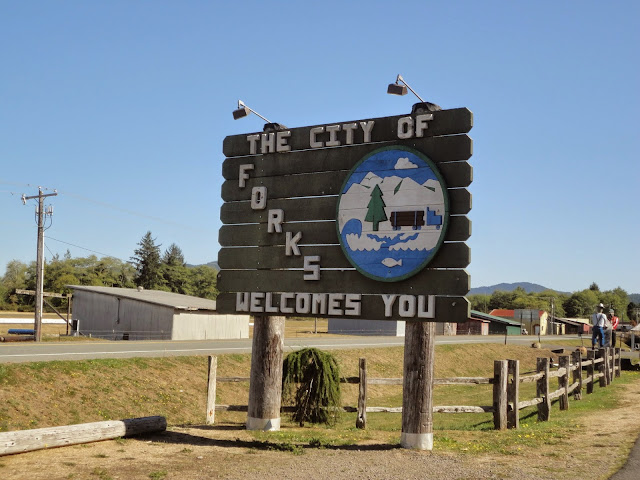 We drove the rest of the way back to Seattle. When we made it back to Bill’s apartment, we cooked chocolate spaghetti we had bough at Pike’s Market for dessert. The spaghetti was recommended to us by a hiker in Glacier and is served with ice cream and berries. It was an interesting experience but I don’t think any of us will be rushing to have it again. 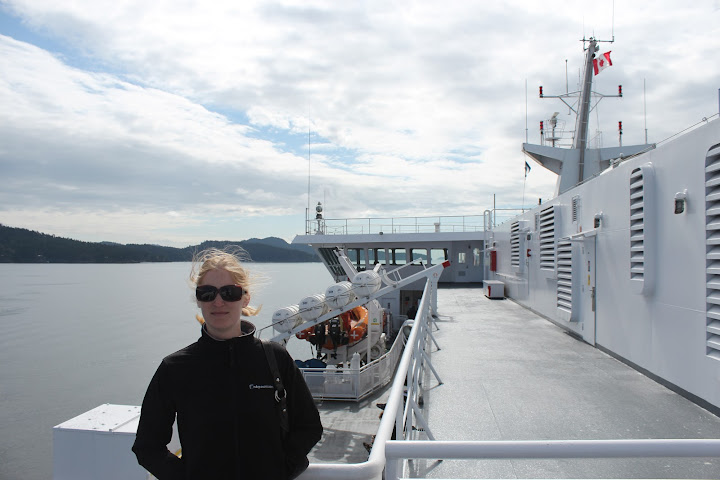 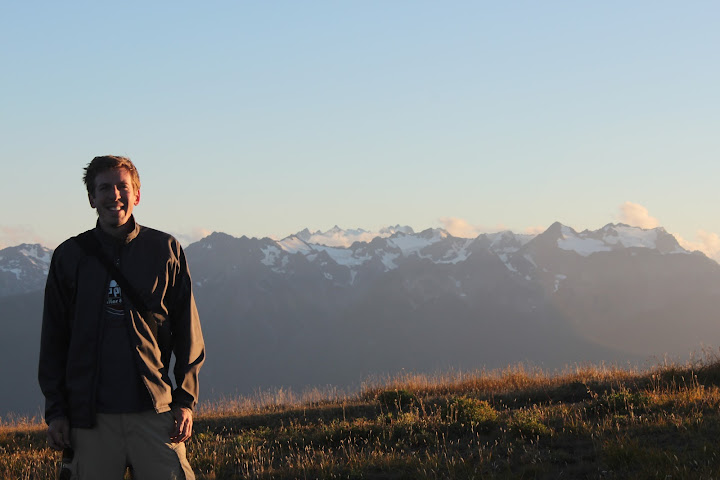 Jon with the inter Olympics 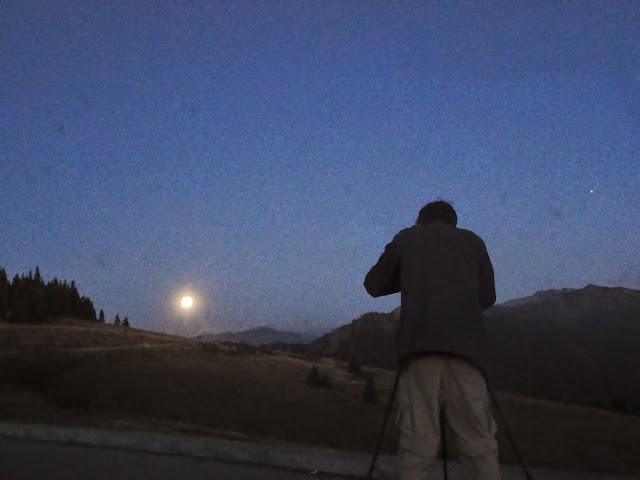 Jon with the Harvest Moon 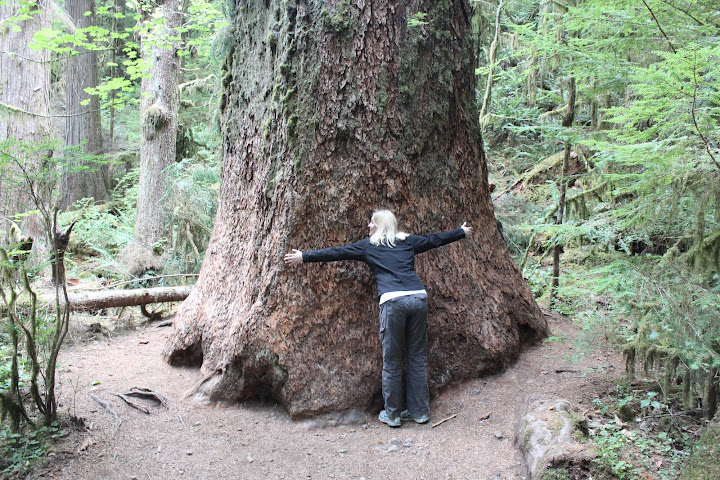 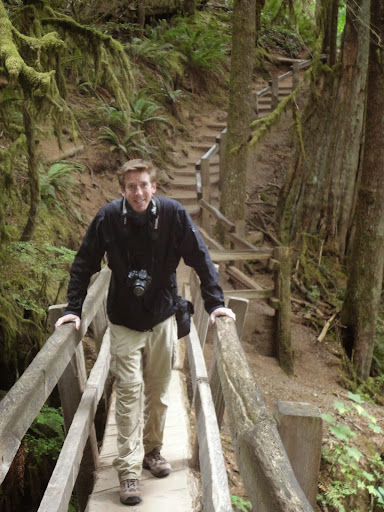 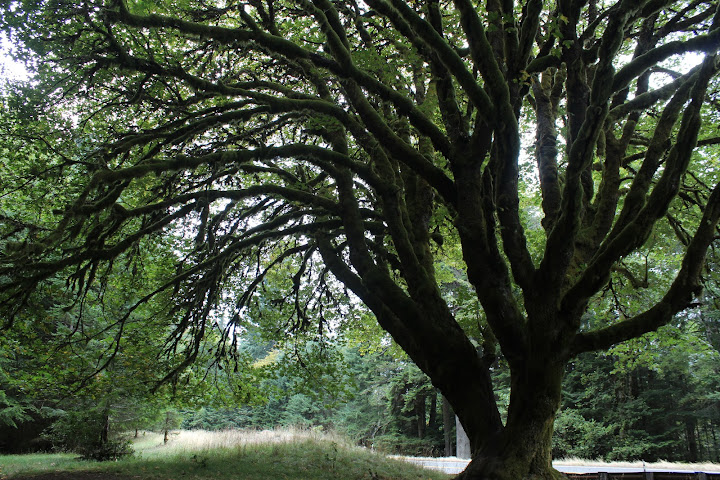